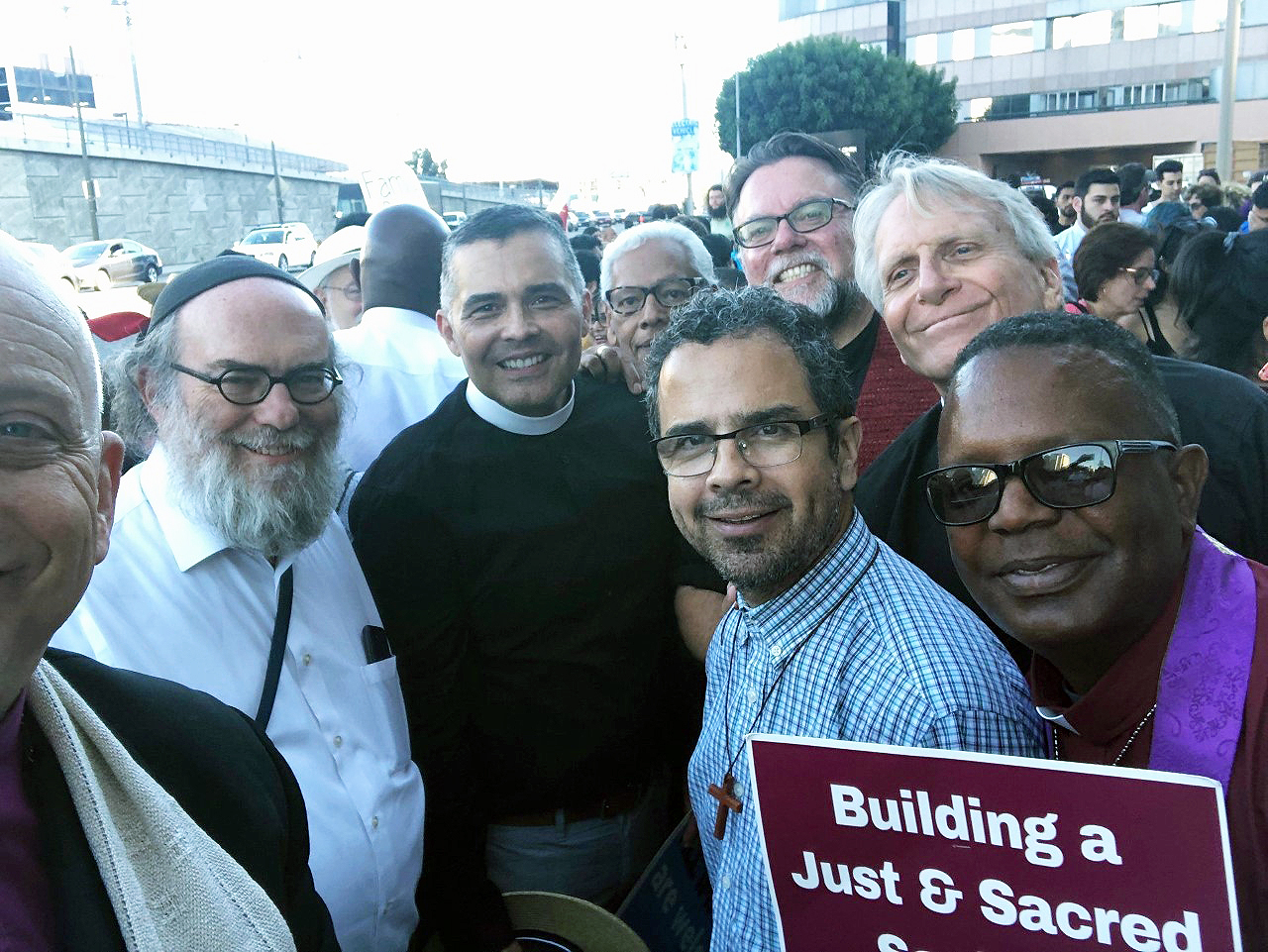 Clergy and lay members of Episcopal Sacred Resistance, the diocesan Sanctuary Task Force, were among participants in a July 1 migrant solidarity rally and procession for which Bishop John Harvey Taylor offered a closing prayer. 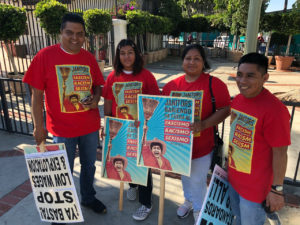 “In the unity of our grief, we pray for all those who have died on the border or in detention and for their families and friends,” Taylor said in his invocation (full text follows below).

Episcopal Sacred Resistance joined partner organizations including the Coalition for Humane Immigrant Rights Los Angeles (CHIRLA) and Clergy and Laity United for Economic Justice (CLUE) in the event remembering children and adults who have died in federal immigration detention camps, elsewhere at the border, or while awaiting asylum hearings. 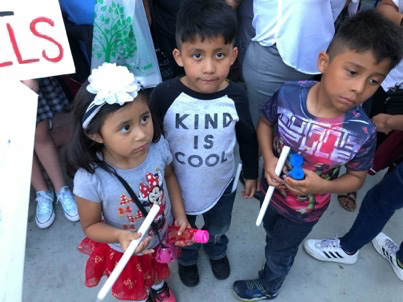 Under the theme “Homeland Security Kills,” the rally began with a news conference at Placita Olvera near the United Methodist church there, and continued with a mock funeral procession to the Metropolitan Detention Center adjoining the Edward R. Roybal Federal Building and U.S. Courthouse on Alameda Street.

An attorney and a child psychologist were among speakers who gave heart-wrenching accounts of suffering among migrants.

“Say it loud, say it clear: Immigrants are welcome here,” marchers chanted along the route.

“Gracious God, the Christian way is the way of justice and peace, reconciliation and unity; and this is the way of all great faiths as well. Remembering each child of God who has been lost while attempting to redeem the promise of freedom, our prayer comes from deep in the heart of our unity. Rest eternal grant to them, O Christ, and may light perpetual shine upon them.

“In the unity of our grief, we pray for all those who have died on the border or in detention and for their families and friends.

“In our unity as a family of believers, we pray that all families will be reunited; that the needs of children will be provided for first, last, and always in the name of Jesus Christ, who gathered the little children around him and blessed them; and that all incarceration of children will end.

“In the unity of our humanity, we pray that these losses – this impossible sadness – will inspire all who have influence and authority to undertake just action for the sake of those who seek to live in safety and freedom, especially our LGBTQ+ siblings, who are at heightened risk.

“In our unity as Americans – north Americans, central Americans, and south Americans – we pray that all governments in our hemisphere will at long last make common cause for the sake of all their people, promoting freedom, due process, safety, and opportunity for all.

“In our unity as citizens and residents of the United States, we pray that our leaders will at long last reform our immigration and asylum system. Help them see that no nation can have secure borders without just laws. Inspire them to restore DACA and stop aggressive enforcement until the work of reform is complete.

“And we pray that you will anoint all those serving in the immigration and asylum system with the spirit of compassion and justice so that the hand of authority spares the innocent, the marginalized, and those who are scapegoats for the sake of political gain. We pray all this in the mighty name of the God who calls all creation into the unity of love. AMEN.”