The diocese raised nearly $76,000 for disaster relief; most of it aided the poor, homeless and undocumented s fires raged through Southern California at the end of 2017, Episcopal congregations in Santa Barbara and Ventura counties — some of them narrowly escaping damage from the flames — immediately went into action to help their neighbors who were not so fortunate. 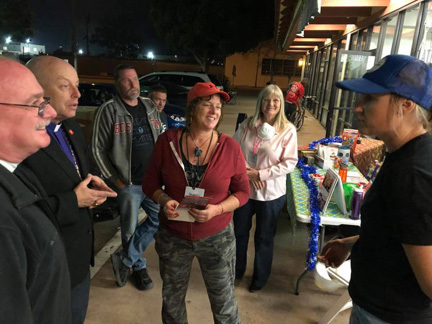 At the request of Bishop Diocesan John Harvey Taylor, Bishop Suffragan Diane Jardine Bruce and Canon to the Ordinary Melissa McCarthy, the Rev. Lorenzo Lebrija, diocesan development officer, set up a fire relief fund that eventually raised $75,883.95 through contributions — online and by mail — from Episcopalians all over the diocese.

According to Lebrija, 148 contributions to the fund included 19 from congregations that took up collections or held fundraisers. The median individual gift was $100; the smallest was $3, and the largest was $20,000.

In January, the fund’s purpose was expanded to include aid to those who lost their homes in horrific mudslides that poured through fire-razed areas, destroying homes and killing 23 people.

The monies were distributed in a series of small and large grants, most of them to congregations, but one also to UndocuFund, a community organization, and one to The Abundant Table, campus-related Episcopal ministry. Grants were approved by Taylor and McCarthy in consultation with the Rev. Canon Michael Bamberger, disaster response coordinator for the diocese. In the early weeks of the crisis, McCarthy and Bamberger held almost daily phone consultations with clergy and lay leaders in the devastated areas to determine where aid was most needed.

Most of the funds were designated for poor, homeless and undocumented residents of the Santa Barbara County and Ventura County communities gutted by fire and flood.

Direct relief efforts mostly took the form of gift cards for necessities. Two congregations used part of their grants to support existing Laundry Love ministries. Laundry Love is a program, popular in the diocese and throughout the nation, that arranges for a laundromat to open its doors on a particular day to homeless and poor residents who would otherwise be unable to afford the cost of washing their clothes and bedding. Church and community volunteers provide quarters for the machines, detergent and fabric softener, along with conversation and companionship. Often the volunteers also offer food (pizza is a favorite), childcare during the laundry process and sometimes other services.

As the fire burned into Ojai, St. Andrew’s Episcopal Church had to evacuate about 30 homeless people who were staying there under the Ojai Valley Family Shelter program, according to the Rev. Greg Kimura, rector. In the middle of the night, Kimura and others shuttled their guests to a Red Cross site at the local high school.

That was the beginning, Kimura said.

“Even in the early days of the fire, it was clear that the homeless, elderly, those on fixed incomes, those with physical ailments, and working class individuals and families were going to be most hurt by the fire,” he wrote to The Episcopal News.

After an immediate gift of $1,000 for direct relief, the diocese granted St. Andrew’s request for $12,550 to continue Laundry Love Ojai’s operation for two years and to fund a listening project that allows disaster victims to record their stories. An additional $3,500 grant has allowed St. Andrew’s to continue offering direct assistance to affected families.

In the months since the fire, Laundry Love Ojai has continued to be heavily patronized. “The grant from … the diocese was a lifesaver for this ministry,” Kimura said. “Not only do we help with laundry, but we provide dinner, art supplies for kids, books in English and Spanish — an 88-year-old volunteer reads in English and Spanish to the children — and recently a volunteer from the American Sewing Guild has been coming and repairing clothing.” The parish also has held fundraisers to support the ministry, Kimura added.

Other continuing needs include housing. “Most of the homes that burned were for farmworkers who now find themselves displaced,” said Kimura. “Many have families and are living out of vans or cars, trying to keep a sense of normalcy for the kids by keeping them in Ojai in their schools and close to friends.” The fire also barred the displaced workers from their jobs, and many lost one or more months of income.

St. Andrew’s has offered direct assistance wherever possible, including hosting several families who have camped in the church parking lot. Parishioners have stepped up with donations and other help.

“I’ve always been hesitant to give money directly (preferring to donate to nonprofits that assist) but found that in a small city like Ojai (with 30,000 folks in the valley) that the church knows a lot of those affected and can more efficiently and compassionately act with direct support,” wrote Kimura. “We know their situation and their stories. The funding from the diocesan fire relief fund allows this to happen without much bureaucracy and with the knowledge that we will see these folks and be able to check up on their well-being. It is greatly appreciated by those who receive help and I am speechless with thanks.”

All Saints Church, located in hilly Montecito near Santa Barbara, like St. Andrew’s, Ojai, was directly affected by the disasters, suffering evacuations during the Thomas fire and again during the Jan. 9 mudslides that destroyed much of its neighborhood. Although the church itself suffered only minor damage, during the mudslide it served as a triage center for its neighbors, many of whom lost their homes. (Click here for a story published in The Episcopal News, Lent 2018 issue about All Saints’ ministry during the emergency.)

Like its neighbor Episcopal churches, All Saints’ response to the fire focused mostly on the most vulnerable of its neighbors; the poor, homeless and undocumented. It used its $5,000 grant from the diocese to provide help for those impoverished and left homeless by the disasters.

In addition to hosting its fellow Episcopalians from All Saints Church for Sunday worship during the evacuations, Trinity Church, Santa Barbara, asked for a $2,500 grant from the fire/mudslide fund to assist the Warming Center, a program run by an interfaith network of downtown Santa Barbara churches that offers food and shelter to their homeless neighbors, especially during extreme weather conditions, according to the Rev. Laurel Johnston, interim associate rector.

he said the shelter was activated for 12 days beyond its usual operation, straining the organization’s budget. Johnston applied for and received a second grant of $10,000 from the diocese’s fund to help keep the shelter open for the additional days needed.

In addition to its financial contribution Trinity provided food and shelter in its parish hall for four of the 12 extra days, hosting 240 guests of the 533 served by the shelter during its extended service.

The farm’s crops were badly damaged by high winds associated with the fire. Smoke from the fire caused such serious air pollution in the area that the farm’s workers were unable to safely tend the fields.

The Abundant Table normally sells produce to the Oxnard and Santa Paula Unified School Districts, but was unable to do so during December, leading to a loss of income. Its Farm Store and Community Supported Agriculture, a program that supplies fresh produce to members for a monthly fee, were also shut down

The fire also put unusual strains on the management as they dealt with the crisis, leading to overtime hours and extra costs for fundraising, emergency lodging, insurance deductibles, and cleanup from the fire and smoke damage. The diocese contributed an additional $15,000 from the fund to assist its recovery.

UndocuFund is described on its website as “a collective effort among Ventura and Santa Barbara County-based grass-roots organizations to assist local undocumented immigrant individuals and families who have been economically impacted by the Thomas Fire and the mudslides.” UndocuFund raised money for relief grants from a wide variety of foundations, organizations and individuals who together have donated more than $370,000 for relief grants to assist these undocumented fire victims. The diocese contributed $20,000 from its fire and mudslide relief fund to UndocuFund’s efforts.

The diocese also contributed $1,500 to Direct Relief (www.directrelief.org), an organization devoted to providing aid “without regard to politics, religion, or ability to pay.” Direct Relief established a $500,000 “1/9 Victims Fund” for the sole purpose of providing direct financial assistance to people affected by the Jan. 9 debris flow in Montecito.

Contributions may still be made to the fund, as needs are ongoing. Contributions may be made here and designated for the fire/mudslide fund. In addition, several fundraising concerts by the Pomona College Glee Club are planned in May, with proceeds going to the relief fund (see story here).