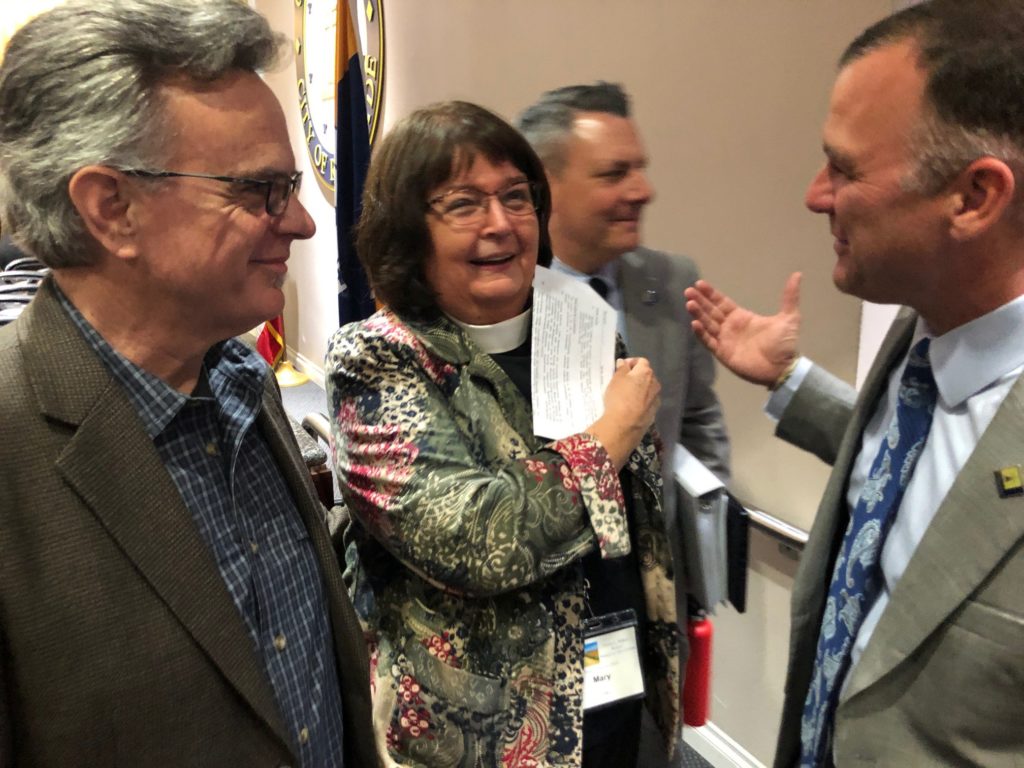 Pictured after a May 2019 meeting of the Riverside City Council are Tim Alderson, executive director of Seeds of Hope; Mary Crist, priest-in-charge at St. Michael’s Ministry Center; and Mayor Rusty Bailey of Riverside. The city council had just given initial approval of St. Michael’s proposal to build affordable housing on its property in the city; a decision that was ratified at a virtual meeting on March 31, 2020. Photo: John Taylor

“It is 49 apartments for people who are not housed now and one for a caretaker, who will live on the property and facilitate case management for the residents,” according to the Rev. Canon Mary Crist, priest at St. Michael’s, who was overjoyed at the council’s action.

The meeting was considered historic since it was held online and included drive-through public comment, because of the COVID-19 safety precautions.

Crist said she was grateful for all “the interagency partnerships who made this possible. We will always be committed to the people on the margins.”

“We are so grateful for the work being done on the St. Michael’s campus,” said Riverside Mayor Rusty Bailey, a longtime supporter of the project. “The flag that our church community has carried over these past few years has been that of faith, compassion, and love. My prayer is that through our collective ministerial efforts that someday this will become the Riverside flag.  That it will be natural for all of our residents and leaders to show compassion to those in times of need. My prayer is not only for a better future for our homeless neighbors, but also that as we step boldly forward with the truth that our own ministries will grow.”

Los Angeles Diocesan Bishop John Harvey Taylor said the council’s action “was an expression of the light of love and hope in a time of deep anxiety and uncertainty.

“I give thanks for the City of Riverside’s and especially Mayor Rusty Bailey’s heart for its homeless and housing insecure residents and for all on the diocesan side who made this big win for Jesus Christ possible – [retired] Bishop Jon Bruno, Escher Gunewardena Architecture, Tim Alderson, advocates at our Riverside churches, our friends at Mercy House and Community Development Partners, and especially the Rev. Dr. Mary Crist, who has never faltered in her vision of St. Michael’s as a place of welcome, justice, and peace.”

In May 2019, Taylor led a group of about 30 diocesan clergy who attended a city council meeting in support of a $2 million loan to jumpstart the project, expected to begin in September of this year.

Crist said she never expected to be involved in outreach to the homeless but has served St. Michael’s since 2012 — a ministry that she says has enriched and brought great joy to her life.

“A lot of people are afraid to work with homeless persons because there are so many stereotypes about them,” she told The Episcopal News recently. “What I’ve come to find is why Jesus fell in love with them. I wish more people would be open to getting to know our brothers and sisters from this population. It is not a waste of time. It is an enriching experience.”

Homelessness has been a pervasive challenge in Southern California and in Riverside, where it is increasing, according to Crist.

According to a January 21, 2020 Press-Enterprise story, the city has counted 439 people living in the city without shelter. County-wide, at least 95 homeless people died in 2019, including 22 from the city of Riverside.

Crist said homeless individuals are often stereotyped as mentally ill or substance abusers, evoking the kind of neighborhood opposition encountered by the St. Michael’s project. She said that relatively few of the people served by St. Michael’s ministry fit that stereotype.

About one-third who came regularly for St. Michael’s feeding ministry were homeless because of employment complications. Another third suffered from mental illness or chronic illness or depression, while the remainder were among the working poor. “They may actually have minimum wage employment but still cannot afford rent and are forced to live in their cars,” she said.

St. Michael’s had offered a Saturday breakfast and weekday lunches, she said. Sandwiches accompanied a Wednesday night bible study, and a Thursday evening Eucharist was followed by a community meal. That ministry has now been shuttered because of COVID-19 safety restrictions.

Victor Beecham, outreach manager for Path of Life Ministries, an organization serving those impacted by poverty and homelessness in Riverside, agreed that the St. Michael’s Project “is an awesome opportunity.”

“That the people who are displaced would have somewhere to call home is so important,” he told The Episcopal News during an April 7 telephone interview. “Because every human being deserves the dignity of having a door key. Homelessness is not a person, it’s a situation.”

Community residents had opposed the project, citing its cost, zoning restrictions, and fears that it would decrease property values and increase traffic congestion and crime. In a February 4, 2020, letter to the city council, resident Joel Ortiz wrote that he opposed the project because “I believe the dynamics of the neighborhood will change greatly, from a quiet, peaceful and family-oriented area to a busy, trafficky nightmare for the existing homeowners.”

Mary and Thomas Carpenter also wrote to the city planning commission on February 5, 2020, urging their rejection of the project. “We have lived within 200 feet of St. Michael’s Church since 1974,” they wrote. They cited fears of increased auto and pedestrian traffic, loss of privacy and security, decreased property values and increased taxpayer costs as reasons to reject it.

But Larry Haynes, executive director of Mercy House, the developer and planned operator of the facility, said he is extremely excited about it, and grateful for both the diocesan and city partnerships that have allowed its progress.

“This is going to be an important project that not only ends the homelessness of a number of individuals, but also will strengthen and beautify the surrounding environment,” he told The News during an April 7 telephone interview.

Mercy House officials met several times with community residents and have addressed their concerns about parking and traffic flow, he said. “There are no studies that indicate the project like the one we’re building will, in any way, have a negative impact on property values. Historically speaking, all of our projects have elevated property values.”

Yet, Haynes added “We have to hear, as operator and neighbor, their fear. When you think of home and what it means — I grew up in Riverside, I know what they are talking about. My dad was a steelworker. My stepmom worked at Thrifty’s, and home for them was safety and stability, and the most important financial investment they could ever make in their lives. So shame on us if we don’t take that seriously.”

Haynes said neighborhood concerns have been taken seriously, and that he is confident that once neighbors see the improvements the project will make “they will be astounded by its beauty.”

Crist added that she, too, is “confident that after the building is completed and after the residents — who will be fully vetted — move into it, the neighbors will see it as a very positive addition to the neighborhood.”

She is hoping eventually to partner in ministries with the neighbors, she said.

Taking it ‘a phase at a time’

The St. Michael’s project makes use of underutilized space at the Riverside church. A first phase, which includes construction of an apartment building, is slated to begin in September 2020 and completed in December 2021.

A second phase involves building a 6,700-square -foot parish hall and office complex, a 2,950-square-foot friary and chapel and a 1,300-square-foot greenhouse. Developers expect to break ground on the second phase in March 2022 and to complete it in November of the following year. “We will take it a phase at a time,” Crist said.

Tim Alderson, executive director of the diocesan Seeds of Hope ministry, recalled that the St. Michael’s project began in October 2014 “with a plan to expand Mary’s ministry among those living without homes.”

The project plan “would convert the 3.5 acres of mostly dead lawn and parking lot surrounding the church and parish hall at St. Michael’s into a productive, peaceful, and welcoming park-like urban farm that could produce food for those who cannot afford it while providing vocational and entrepreneurial training opportunities for those trying to get back on their feet,” Alderson wrote in a recent email to the Episcopal News.

Then-Bishop Jon Bruno initiated the project as part of a larger vision to build a Franciscan friary at St. Michael’s, according to Alderson.

At that time Bruno was the bishop protector of the Society of St. Francis, and hoped to include living space and a chapel for the friars, Alderson said. Part of his vision was to include space for novitiates, chosen from those living without homes. “The friars, who are committed to living among the poor, would help to provide the supportive services necessary to help people transition from the street back into the fullness of life that includes housing and employment.”

Alderson assembled “an amazing team of visionaries and experts who together created an inspiring and beautiful plan, which Bishop Bruno enthusiastically approved.” The team began working with city officials to move the project forward.

Along the way, Bruno retired, key city personnel moved on, elected officials ended their terms, and the project focus shifted entirely to affordable housing. “Although the political process proved to be long, circuitous, and bumpy … it is truly amazing to see what inspired vision and persistent passion can accomplish even in the face of seemingly insurmountable obstacles,” Alderson said.

The city planning commission rejected the project, but the city council approved an appeal of that decision, moving the project forward. Crist said she is grateful for all the community support from clergy colleagues and other ministry partners, calling the approval a “team effort.”

Located at 4070 Jackson Street, St. Michael’s is near two community parks where homeless people frequently congregate. Yet the community is vibrant and Crist identified a real need for hosting affordable residential housing, she said.

Developers for the $17 million St. Michael’s project are Community Development Partners, whose founders share 30 years’ experience dedicated to social change through community development and investment. Since 2011, CDP has successfully built a portfolio of 19 unique projects comprising more than 1,400 units and $300 million in total development costs.

Mercy House, founded in 1988 in Santa Ana, offers extensive services to homeless individuals and will provide case management and other services to residents upon project completion.

St. Michael’s Project will include 24 units of permanent supportive housing for area homeless individuals who earn at or below 30 percent of the area median income, or the 2018 federal poverty guideline of about $14,150. The project will also include 25 units for low-income individuals and families earning no more than 80 percent of the area median income, along with a property manager’s unit.

— The Rev. Canon Pat McCaughan is senior correspondent for the Episcopal News and vicar of St. George’s Church in Laguna Hills.