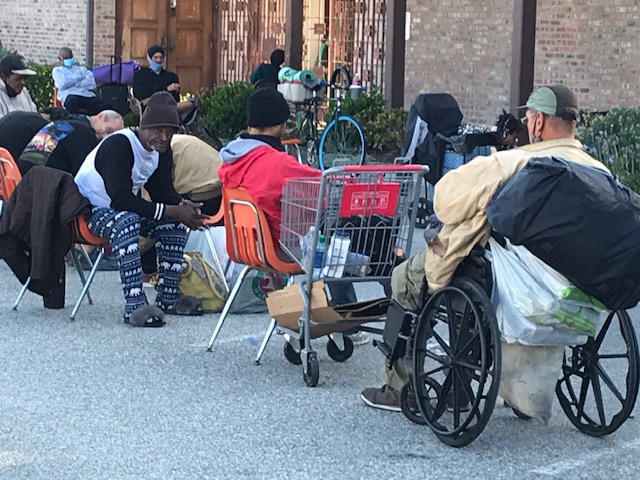 [The Episcopal News] – Steve usually arrives about 6 a.m. on Saturdays at St. Luke’s Episcopal Church in Long Beach. He showers, changes into clean clothes, eats, and then helps others do likewise.

At the end of what can be exhausting but satisfying long days — the church’s shower ministry serves about 100 on an average weekend — he pitches his tent outside the church gates and settles in for the evening.

“The first day I walked through those gates, I got this warm welcome,” he told The Episcopal News in a recent telephone interview. “They didn’t judge me. They just helped feed me, clothe me and shower me. I’ve come back nearly every Saturday since.”

St. Luke’s is among several Southland congregations with shower ministries for the unhoused. Others have included St. James in-the-City, Los Angeles, and All Saints Church in Highland Park, working with Shower of Hope, which offers over 2,000 free showers each month in mobile vans in more than 20 locations throughout the county.

Margaret Ecker, a shower ministry coordinator at St. James in-the-City Church in Los Angeles, said she has seen the numbers triple in recent months, from about 15 weekly to as many as 45. 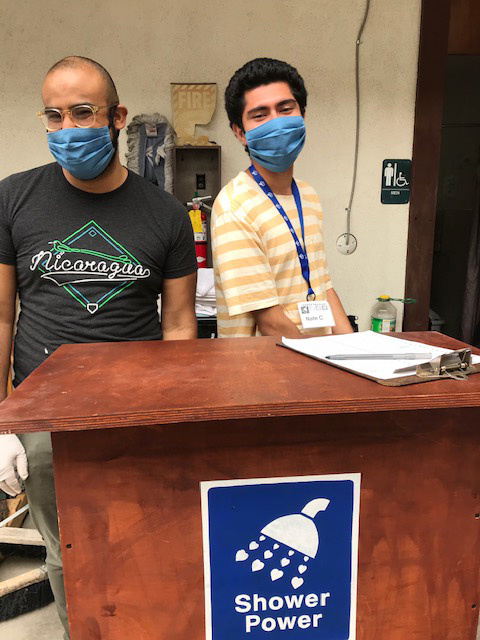 Clothing and food usually are provided along with the showers. Since the coronavirus pandemic, a hot meal for shower guests has been replaced with sack lunches, she said.

Dan Donohue, 25, has been an enthusiastic St. James volunteer. “I wanted to get involved,” Donohue told The News. “I think the ability to clean yourself is a basic human right. The simplicity of the idea is so nice. There are a lot of difficulties for people without access to basic needs like showering. This way it is very simply solved by having portable showers.”

The Studio City resident said he wants people to know “that it’s high time these sorts of things are addressed. It is important for people to realize these basic needs aren’t being met for every member of society. The sooner we come together and agree that there are huge systemic problems that aren’t being addressed, the quicker we as a whole society will be elevated.”

In 2019, there were an estimated 36,000 people experiencing homeless in the city of Los Angeles and nearly 59,000 throughout the county. 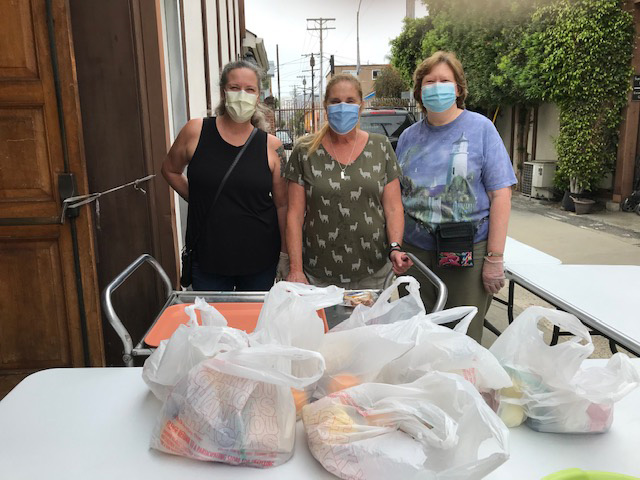 St. Luke’s: a 30-year history of hospitality and care

Gail Mutke is a 48-year St. Luke’s member who coordinates the shower ministry. She serves as a Saturday team leader and said that the pandemic may have forced logistical changes, but the ministry’s hospitality and care has remained.

The church has a 30-year history of offering showers for the Long Beach unhoused population, currently estimated at about 1,800 people, many in the downtown area.

Recently St. Luke’s received a $10,000 grant to support the ministry from the Long Beach Community Foundation’s COVID Emergency Fund, according to the Rev. Jane Gould, rector.

The grant was used to purchase two new water heaters because “each week we would have the hot water go out for a half-hour, 45 minutes. If it was your bad luck of the draw, if it was your time and the water was cold — well, if you’re talking about giving human dignity, you need to be able to at least guarantee hot water,” Gould said.

Shower guests begin lining up early on Saturday mornings. The church gates open about 8 a.m. Volunteers pass out masks, if needed, and chairs are placed in the parking lot six feet apart to encourage social distancing. 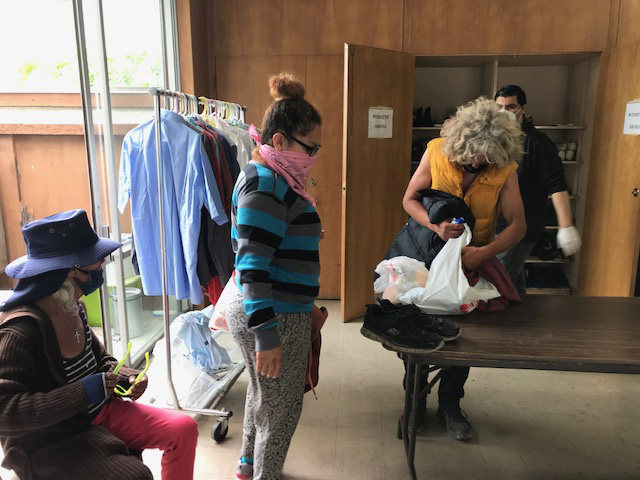 Each guest receives tickets for both a sack meal and the shower. “First they get called for clothing. Then they wait for their turn in the showers, and they can go and get food anytime they want to,” Gould said. Women are directed to one part of the campus; men to another for their showers. Food and clothing are provided by local partner churches.

Kevin Wood, 42, is the administrator at St. Gregory’s Church in Long Beach, one of several churches who partner with the shower ministry. He and other volunteers prepare about 130 of the sack lunches — typically a peanut butter-and-jelly sandwich, fruit, chips, cookies, water, and a plastic spoon, “because we’re going to serve hot soup the next day as well.”

“St. Luke’s is on the front line for those coming to get food,” Wood said. “When I heard they needed help, it inspired me to help out. Any giving back to the community is always the best thing we can do. It makes you realize how blessed you are, and that you need to give back in whatever way you can.

After Long Beach resident Abner Rios, 27, was furloughed from his customer service position, he began volunteering at the ministry also, handing out hygiene kits, equipped with razors, toothpaste and toothbrush and other personal care items.

“I felt like I needed to help out in any way I could,” Rios said. “I thought this was one of the best ways to use the free time I have.”

The ministry has made such an impression, he said, that whenever he returns to work, he wants to continue volunteering because “I’ve gotten to know people by name, to make conversation and to see them for who they are—regular, everyday people who are in a difficult situation. 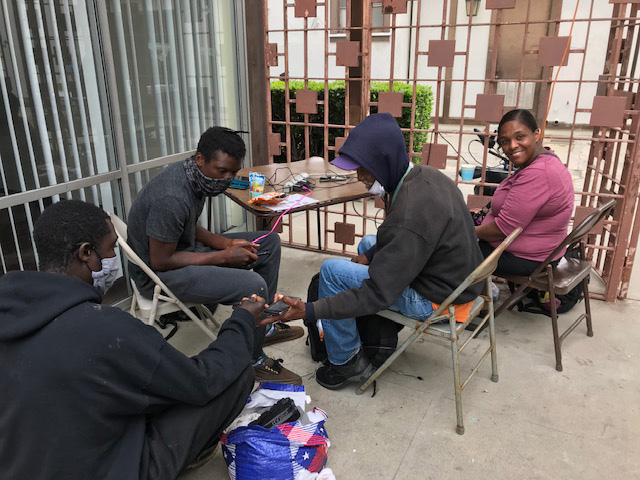 Clients visit while waiting to be called for showers, food and clothing at St. Luke’s shower ministry. Photo: Jane Gould

“Just coming in here and seeing the faces and knowing that this church is offering something that is so essential to people — it feels really good.”

Nick Carbajal, 22, a recent Cal State Long Beach graduate, said volunteering at the ministry inspired him to become a member of St. Luke’s.

“The Episcopal Church offered me a place where my spirituality was able to be more fully developed into a more mature, fleshed-out spirituality,” he said. “I don’t think homelessness is in God’s kingdom, at the end of the day.

“Being with the guests, hearing their stories, and what they have to do to survive, makes me realize that homelessness shouldn’t be a thing in the first place,” he said. “We’re trying to build a new world and make sure they have these services and hopefully, put a new system in place.”

She noted that there are limits to their program: “We’re changing lives, but not systems,” she said.

But, she added, “it is incumbent upon us to serve them and to work with our political leaders to figure out solutions to homelessness and how you address homelessness with those with substance abuse or emotional disorders.”

Like Mutke, Mike Allen is also a Saturday team leader. St. Luke’s guests range from those with behavioral health challenges to “someone who simply lost a job,” he said. “Their lives were turned upside down and they found themselves on the street.”

For example, “One young man is a student at Long Beach Community College. His resources are going to pay for school. He’s young, able-bodied and it’s easier to sleep outside and to couch-surf and do whatever he can do to try to pay for school.”

Allen, a detective with the L.A. County Sheriff’s Department, said it is inspiring to see young people volunteering to assist the community, especially since traditionally many of the volunteers are over 60 and therefore unable to assist during the COVID-19 pandemic.

Allen said St. Luke’s ministry “is a cool community effort. Unfortunately, the surrounding community tends to be frightened by this population and, with the onset of the pandemic, those fears have been heightened.

“If we could just get more folks from the community to volunteer or to stay for a little while, a lot of those fears could be quelled,” Allen said. “If they could set aside their bias and experience this ministry as a volunteer, it would decrease their fears substantially.”

Increasingly, the guests themselves, like Steve are also volunteering, he said. “The joy is absolutely mine to be a part of this and I gain far more than I give,” he added.

Steve said sleeping close to the church brings him comfort. He moved to Southern California from Chicago 15 years ago, searching for an estranged sister. He never found her. He didn’t know anyone or have any place to go.

“People told me there’s a church on 7th and Atlantic, and they will hook you up with food, a shower, and clothes — basically what I was looking for,” Steve recalled. “It pretty much became my home church. Then I got into helping the homeless and even though I’m still homeless, I feel it’s a way of giving back.

“Like most homeless people, I’m not looking for a handout, but a hand up.”