When the Rev. Gerardo Romo, vicar of St. Hilary’s Episcopal Church in the high-desert community of Hesperia, noticed an abundance of food provided at coffee hour and potluck gatherings of the congregation, the idea occurred to him to share with day laborers seeking employment at local building-supply retailers. 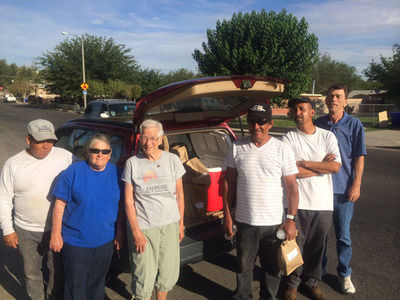 Soon I found two eager volunteers to help me, and we started the third Saturday of January bringing coffee and some of the sweet goods we had in the fridge,” Romo told The News. “We found the laborers had already some sort of breakfast, so we next time we prepared a brown- bag lunch of a sandwich, an apple, a granola bar, a bag of chips and a bottle of water.”

Romo reports that the St. Hilary’s team has delivered more than 1,000 lunches so far, about 40 every Saturday. “The cost of the lunches per week is $70,” he said, noting that “many in our congregation contribute, in kind or with money, and sometimes the cost is covered from the vicar’s discretionary fund.” Contributions are always welcome, Romo added.

“Many are the gains,” says Romo, “not only fulfilling the commandment to feed the hungry, but also the congregation has realized that these men are good hard-working people, and though some are employed during week days, they have to go the extra mile on weekends to meet the expenses of their families.

“Also there has been a learning experience regarding the ones who are undocumented,” Romo adds. “Some members who had a prejudice and used to call the workers ‘illegals’ rather than ‘undocumented’ are now learning that those men are not criminals and that all they want is a job, no matter how hard they have to work, or how low payment they may get.”

Unknown to the congregation at the time, their new ministry responds directly to a 2009 resolution of General Convention requesting that dioceses of the Episcopal Church help provide support for day laborers. The resolution (2009-C083) “calls on the dioceses to support efforts to create a just environment for day-labor employment. 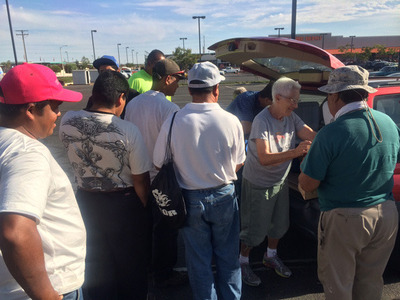 Workers gather to pick up the simple lunches from the volunteers. 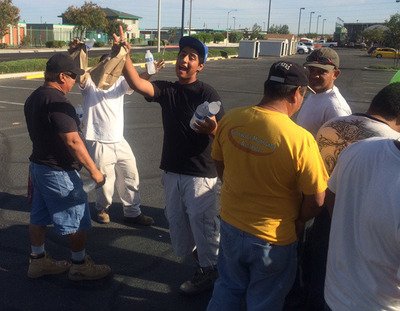 Workers celebrate the gifts of food and water.