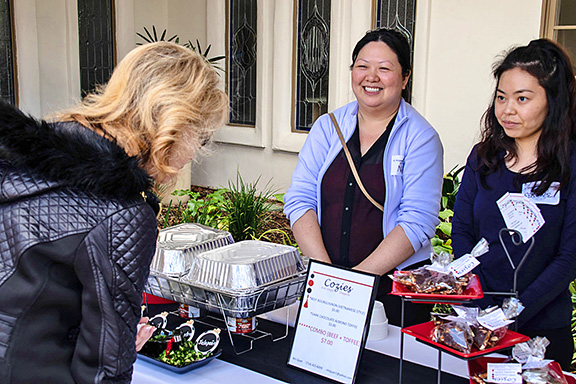 Sandi Romero is at it again.

On a recent day, she is at the San Juan Capistrano church, aiding students’ final steps to becoming licensed. A half-dozen students are filling out permit applications to prepare and package food for sale in their homes and to create and register business names.
Students are filling out Cottage Food Operation Packets manually and then recording them on the computer. The cottage law “is a new law and it’s not carte blanche but it’s pretty good,” Romero told The Episcopal News. 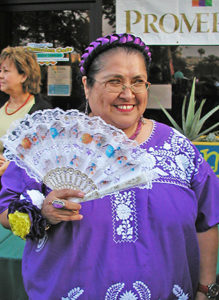 Partnering with the Institute for Urban Research and Development, an institution of the Episcopal Diocese of Los Angeles, Romero launched Mama’s Hot Tamales in 2001. She says jokingly that IURD chief executive officer Joe Colletti and then-L.A. Bishop Diocesan Jon Bruno “anointed me Mama.”

The kitchen training center brought together street vendors from various Latin American backgrounds in the MacArthur Park area of Los Angeles. The goal was to help educate and support vendors in moving from an ‘informal economy’ to a formal one. She since has closed that location and currently operates a café in Pasadena.

“The (current) partnership with St. Margaret’s and Fr. Rob is wonderful,” Romero said enthusiastically. “He has hosted us and given us space and offered to subsidize some of the fees the students need to pay. It helps start them off in business and gets them going.”

“A lot of people have dreams. They want to do something meaningful with them,” he told The Episcopal News. “We want to encourage them, to offer hope, to help them with technical things like forms. Sandi’s done it before and she knows how to do it.”

The program debuted in 2018, deriving its name from the Spanish translation of the church’s iconic rose window. The invitation received an overwhelming response. “For starters, we thought we’d have maybe ten students,” Edwards said.

Instead, there is a waiting list of nearly one hundred, and a call for night classes in addition to the current daytime schedule.
Students dream of being restaurant owners and caterers, jewelry-makers and event planners and even starting a Mexican ballet folklorico group. “We’re open to any small business,” Romero said.

She put her community organizing skills to good use, telegraphing the word locally and connecting with local businesses, schools and the Small Business Development Center in Orange County, who supported the program with instructors.

“We also brought in speakers,” Romero said. “From the city health department, to go over the specifics of the laws for food-handling and other things. Students were aided in how to present, how to budget, market, whatever topics they felt they needed.

“Most of them have been doing business in some capacity, but they needed to know how to take it to the next level, and how to get all these permits and get through all the bureaucratic red tape so they can grow.”

“Our goal,” she said, “is to help them get those things and go and flourish. The fiesta is a collaboration of everybody who graduated from the first class. We can do this together. We can move to different fiestas, different events, festivals.”
Monica Del Cid is one of those students.

“My future goal is to have a restaurant. For now, I am trying to cook. I am from Guatemala and I want to cook the food of my country.”

Her husband’s internet profession brought the family to the Southland about six years ago and with her youngest child a high school senior, Del Cid, 47, felt the time was right to pursue her dream of creating “Monica’s Kitchen.”

The chef’s specials will include Guatemalan Mayan soup, kaqik, made with chilies and pumpkin seeds and sesame seeds. It is flavorful and colorful, made with turkey,” she said.

And tamales — pache — made of potato dough and served up on a banana leaf, “will become one of my special dishes,” she said. “It is made with achiote; it’s like a seed, and it turns them red.”

The cuisine is delicious but represents much more, she said. “It is patrimony from my country, because of the Hispanic influence, the influence from Spain, who came to conquer our country, and its infusion with the Mayan culture. Our food is like our culture, the way we show love and respect for others.

“If somebody dies, we make tamales. When somebody is having a birthday, we cook for them. It’s like our life, celebrating with food.”

Paches are sold on Thursdays in Guatemala, she added. “In every house, you see a little red lamp outside, you know they are selling paches.

“My dream is to show the world the flavor of my country. I want to keep the simplicity of my people but with flavor and spice and in a place that is comfortable. I want my restaurant to be clean and beautiful, like my country.”

A member of the first graduating class, she and others presented their wares, at a fiesta held on March 10 during the church’s regular coffee hour.

Preparing for just such an event was another of the course lessons. “They taught us about important things, like insurance,” Del Cid said. “We learned the right way to start a business. Some paperwork we can do by ourselves. The teachers have experience and are teaching from their experience.

“One was telling us how much to charge. He told us the story of someone who was selling cookies and she was just earning five cents a cookie. That is not a business.”

She is so excited she can hardly wait: “to see the face of people enjoying the flavors. That’s really amazing for me. That’s my passion. I am really grateful for this opportunity. They are giving us this space and this will be great for all the people doing things without knowledge, that can now go to the next step.

“Then it will be better and better,” Del Cid said. “I believe in God and when you do things with passion and do what you love to do and have God in your heart, everything is going to be okay.”

Meg Gorham is a 20-year parishioner at St. Margaret’s who enrolled in the classes to gain a fresh take on a long-standing dream of operating her own event-planning business.

“I got involved because Fr. Rob announced in church that they were starting this class,” she said. “It’s been a ministry of mine, lending stuff to people out of my garage and a lot of civic involvement.

“All of a sudden it was like, now I need to team my passion with hobbies and fun stuff to make it income-producing,” Gorham said. “But the question was, how do you just become a business throwing parties?”

Referring to her garage as “the lending place” she said it is filled “floor to ceiling, side to side, top to bottom” with table linens, wood slabs, chafing dishes, all kinds of décor. “I’ve got a fiesta box, a pirate box, a tropical box. You tell me whatever kind of party you want to have and whatever kind of décor elements you need and I can help you with all of it.”

“I’m a bit of a keeper. Which is different than being a hoarder,” Gorham said laughingly. Inspired by the program, she has dubbed her business “Practicing Hospitality,” based on Romans 12:13 which says to share with God’s people who are in need and practice hospitality.

The program’s sense of community was incredibly affirming, she added. For example, for the March 10 fiesta at St. Margaret’s, she loaned decorative displays to another student.

After a particular class she “drove straight to the county clerk’s office, filled out my forms. A requirement is you have to publish them in a newspaper, a ‘doing business as’” announcement. She found a newspaper with economical ad prices and: “they took my payment over the phone.”

Romero said Gorham returned to share her newfound knowledge with the class, which is “how we all work together, to help one another.”

Gorham’s services are varied: “I do cooking classes, church retreats, host women’s retreats. I have friends who are spiritual directors who lead maybe four retreats a year. I just did one last week. I do all the food and preparation and hospitality part and they put on the retreat.”

Her goal is to be number one on the list for an ‘eatwith’ app for South Orange County. “You download the app to your phone and you can make reservations for a meal at someone’s home in Barcelona or Madrid or Albuquerque or Escondido. Escondido’s the closest one right now.”

She also has ideas for organizing St. Margaret’s monthly feeding ministry to the homeless in Capo Beach via a group cooking session at her home.

“Instead of us all going to Costco and buying their lasagna, we could make assignments, you bring a bag of sautéed or steamed carrots, another person brings celery, another cooked chicken, deboned and cut up, and together we can make 40 chicken pot pies.

“It still distributes the work. It provides fellowship and it feeds the homeless. On top of that, my next proposal would be, instead of us all going to Costco to buy food for the homeless, we pick up a Ventana Rosada vendor to provide it.”

The fiesta, an opportunity for the entrepreneurs to display their knowledge and present their food, “was a great success,” according to Edwards. “We had a solid crowd and, more importantly, those who came were very enthusiastic.”

He wonders about the implications of La Rosada Ventana for a younger generation seeking community.

“What if churches held a Saturday night meal, inviting anyone and recruited young people to cook an agape meal? A come-as-you-are kind of meal. A sit-next-to-someone-you’ve-never-met-before kind of meal, and break bread together. A just-get-past-everything-else kind of meal — kind of recreating Thanksgiving every Saturday night. It could make church, for them, a viable option.”