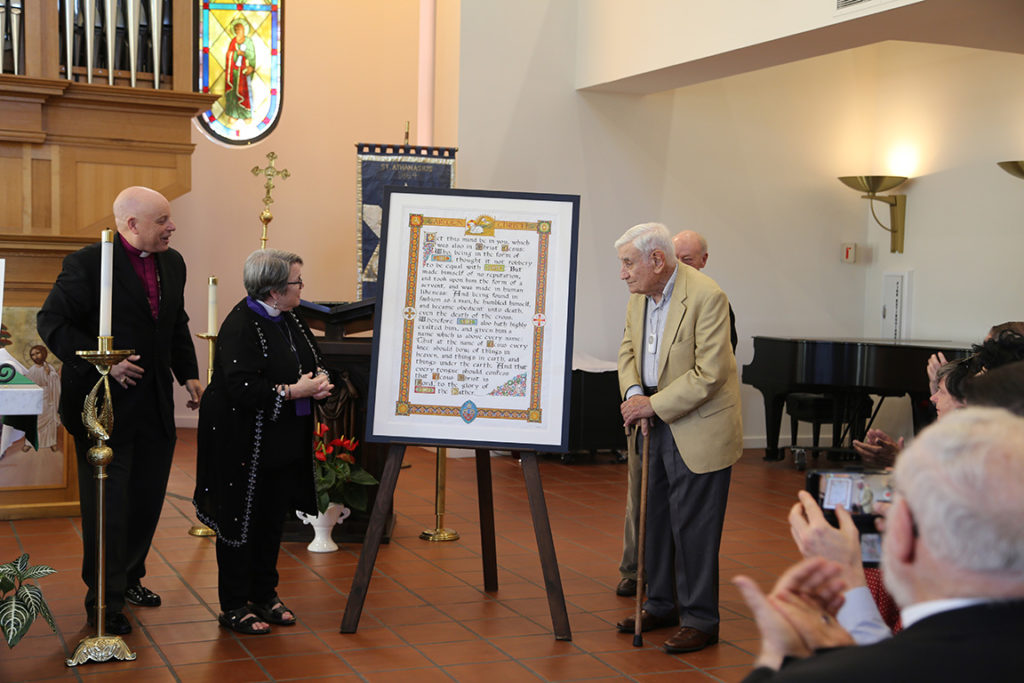 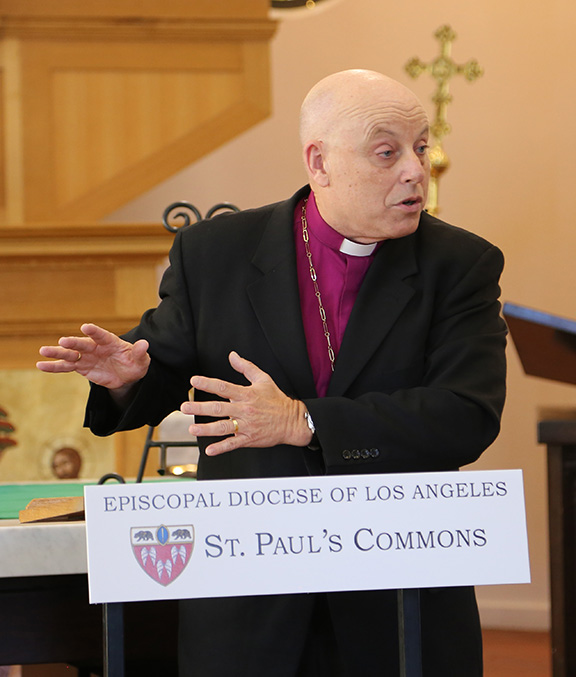 Formerly known as the Cathedral Center of St. Paul, the facility will continue to function as headquarters for the Episcopal Diocese of Los Angeles, as well as a retreat, conference and resource center, Taylor told the gathering.

St. Athanasius, meanwhile, will continue as “a neighborhood church, serving, proclaiming and loving” with Sunday services in Spanish, English and Korean, he said.

He noted that the bishops’ cathedra (chair) and bishop suffragan’s chair had been moved to St. John’s Cathedral, Los Angeles, which “will now begin to grow into its new role. The leaders of St. John’s have a vision of participating in the civic and cultural and worship and political life in Los Angeles in the 21st century.” St. John’s will function as the official cathedral as it has since 2007, and will participate in the diocesan capital campaign, he said. (It is technically a pro-cathedral, a parish church that fulfills the functions of a cathedral.)

Taylor also took time to mention and to thank his predecessors, former diocesan bishops Frederick Houk Borsch and J. Jon Bruno, for their vision and ministry, noting that Oct. 22 was the 25th anniversary of the original dedication of the Cathedral Center. Bruno was the first provost of the Cathedral Center prior to his 1999 election as the sixth bishop of Los Angeles. Previously he was rector of St. Athanasius’ Church, the oldest continuing Protestant church in Los Angeles, located where the Commons now stands. It was Bruno who suggested the site for a new diocesan ministry and administrative hub after its previous headquarters was sold in the early 1990s. 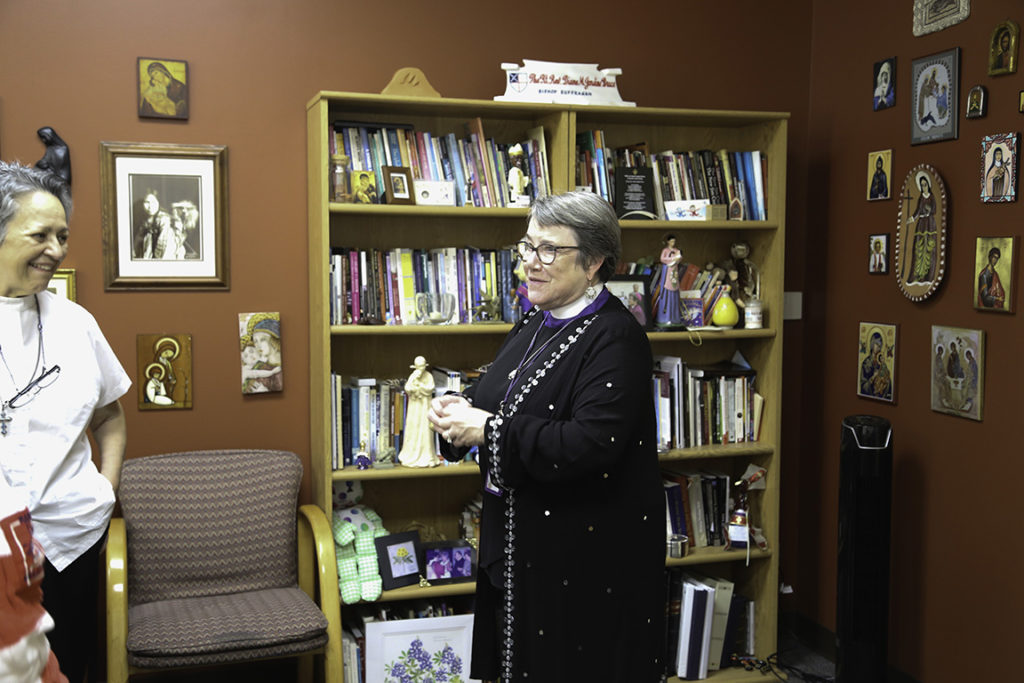 “We had planned to include the Eucharist today, but not everyone could be here,” said Taylor, who said he had spoken with Bruno earlier in the day. He added that he hoped Bruno would preside over the Holy Eucharist, “at these places he loved so well.”

Citing increasing housing challenges in greater Los Angeles, Taylor mentioned the gentrification of the Echo Park neighborhood surrounding St. Paul’s Commons and the increased emphasis on sustainability for all institutions.

“It’s a transformed neighborhood. We’ve now hung a banner to say, ‘Have your banquet, have your quinceañera here, have your graduation party here,’ because that will help us sustain St. Paul’s Commons. In the same way, we’re inviting all our institutions to think about using their real estate to sustain their institutions.”

That sustainability will enable both institutions and neighborhoods to feel more secure, he said.

He invited those attending the gathering to visit throughout the center, to check out sales at the bookstore, as well as a first-floor exhibit of illuminated biblical manuscripts by Vincent Mazzucchelli. 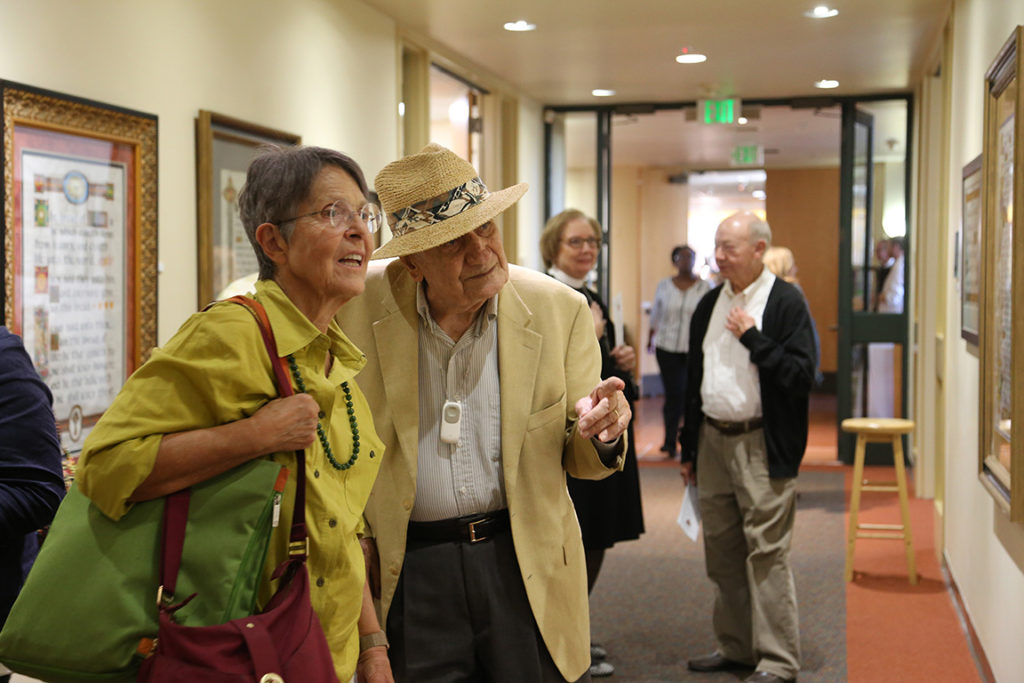 Artist Vincent Mazzucchelli points out some of his illuminated manuscripts now on display at St. Paul’s Commons. Photo: Janet Kawamoto

Mazzucchelli, 92, a cartographer, presented an illumination of the Carmen Christi to St. Paul’s Commons. He told the gathering he produced the manuscripts as acts of thanksgiving and devotion and had gifted several to St. Thomas the Apostle Church in Hollywood, where he and his spouse, John Thornbury, have been members since 1969. The Carmen Christi will be on permanent display at the Commons; other works in the exhibit will be there until the end of December.

Also joining the celebration were Archbishop Ronald Lee Firestone of the Anglican Free Communion, Province of California, and Angie Aramayo, a representative from Los Angeles Mayor Eric Garcetti’s office, who thanked Taylor for diocesan and civic partnerships over the years.

Attendees explored the center, met diocesan staff who were on hand to explain their work, and enjoyed lunch on the rooftop terrace.

For more about the Retreat and Conference Center at St. Paul’s Commons, click here. 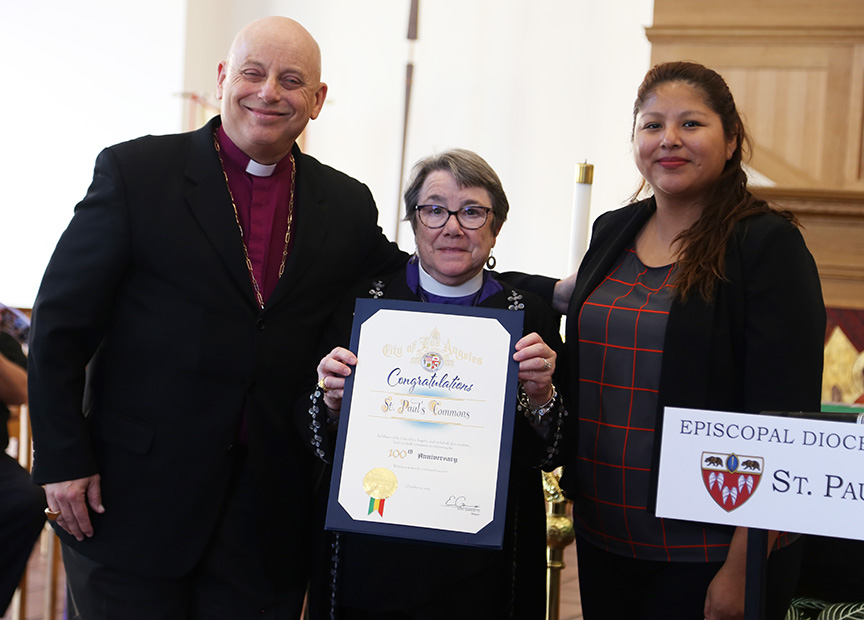