Revival or resurrection; Eagle Rock church is coming back as ‘St. Be’s’ 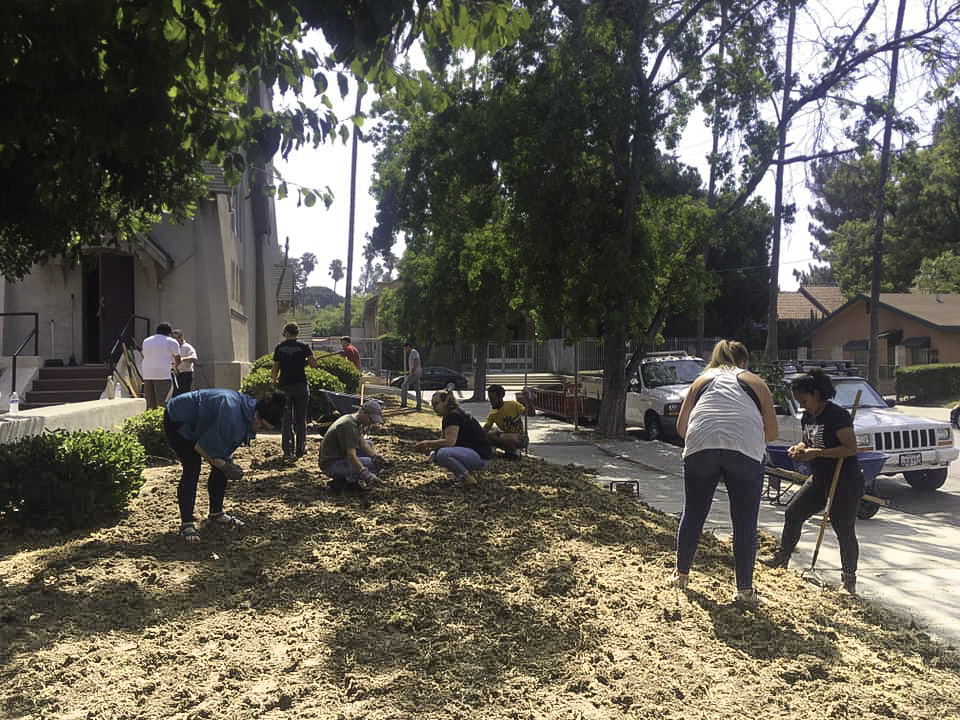 Volunteers pitch in to clear the dying lawn at St. Barnabas’ Church, Eagle Rock (Los Angeles), preparing to plant a garden with herbs, vegetables and flowers. With the support of St. Stephen’s Church, Hollywood, and its rector, Jaime Edwards-Acton, the Jubilee Consortium and Seeds of Hope, the church will relaunch as “St. Be’s” at an event on Sept. 28. Photo: Jubilee Consortium

Call it revival or resurrection, St. Barnabas Episcopal Church — which closed to official worship a year ago — is back as “St. Be” and is inviting the entire diocesan community to a Sept. 28 party to celebrate the launch of a reimagined, exploratory community in Eagle Rock.

For the Rev. Canon Jaime Edwards-Acton, jump-starting the new ministry was part of being a good neighbor.

“I’ve lived in Eagle Rock for 20 years and I wanted to explore something new, to re-energize the community, just because it’s my neighborhood, and because I’d love to have a vibrant community here,” said Edwards-Acton, who is rector of St. Stephen’s Church in Hollywood and executive director of the Jubilee Consortium.

His work with the consortium, a collaborative of Episcopal churches formed in 2001 to provide leadership and enrichment programs to local communities, helped fuel the revitalization. 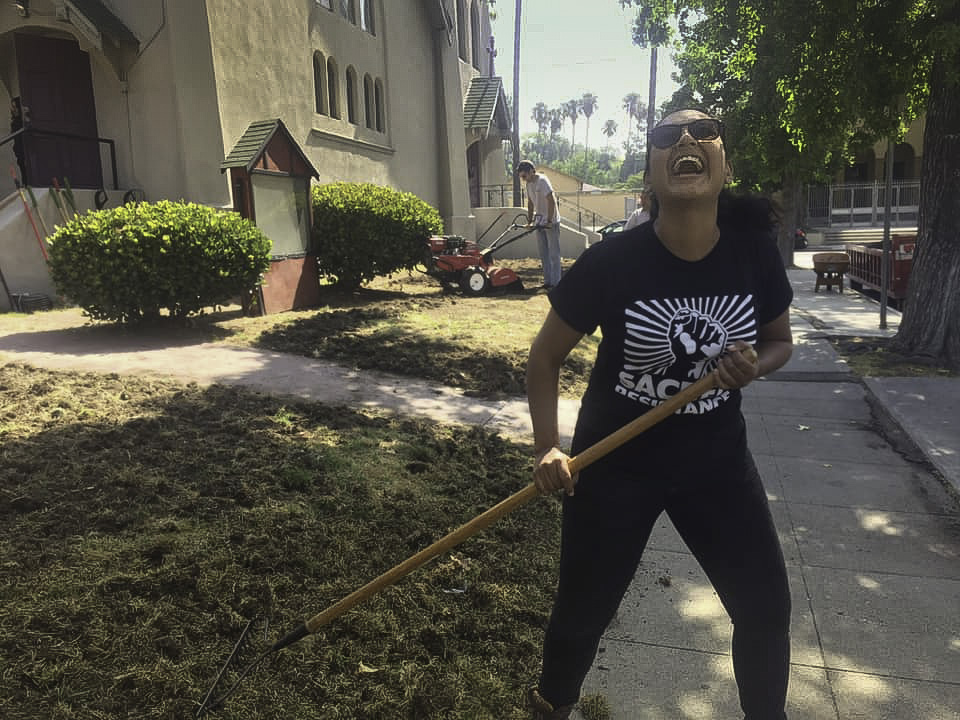 Clearing the way for St. Be’s new garden involves a lot of hard work, as well as some good clean fun, for a squad of interns and volunteers. Photo: Jubilee Consortium

It also sparked the imaginations and captured the hearts of folks like Junmey Wang, 25, a 2018 Jubilee Intern who asked to be involved when she heard about the St. Be’s initiative.

“Just the vision that we had for St. Barnabas was really attractive to me,” Wang told The News recently. “The idea of remaking a space for the Eagle Rock community, the idea of it being a diocesan-wide effort instead of just a St. Stephen’s effort — I wanted to help build something creative like that. A place to explore our faith and to journey together was something very beautiful and an effort in which I wanted to be involved.”

For Wang, St. Be’s represents personal transformation: “This is the first time I’ve been in a church community where the voices of young people are valued,” she said. “And not just valued, but we have the opportunity to impact the long-term vision of the church.

“The community that I know of in St. Be has been welcoming to me, in allowing me to exist in a grey space, where I am able to ask questions and to be creative. I am glad to have found a community that is seeking to create meaning but is also open to the mysteries of life, to not knowing together.”

It has involved a great deal of challenging work.

Wang and Rodell Jefferson, 22, also a former Jubilee intern, are the church’s organizers — responsibilities that involve fluid job descriptions, patience, flexibility and a willingness to take on just about any task.

Like pulling out all the dead grass at the front of the 104-year-old church, roto-tilling and composting to prepare for a big planting Sept. 28. At the evening launch party, guests will be invited to plant the first herb, vegetable and flower seeds for a Seeds of Hope garden. 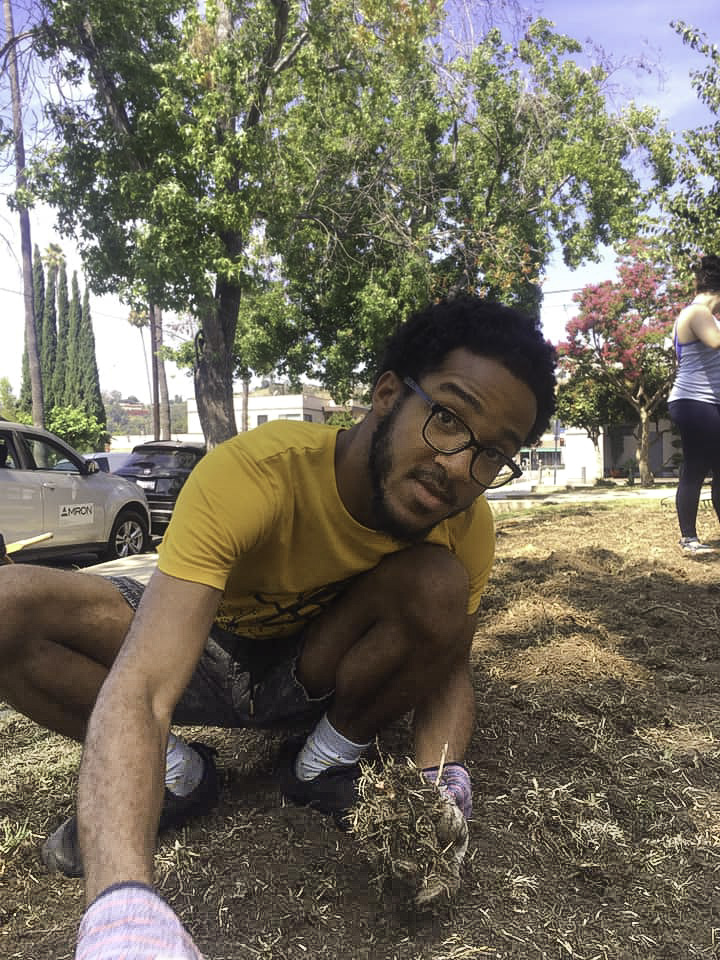 Rodell Jefferson, a former Jubilee Intern, is one of the leaders of the new community being built at the Eagle Rock church. Photo: Jubilee Consortium

“It’s a lot of logistical work,” according to Jefferson, whose responsibilities have ranged from securing parking lots and utilities to crafting online Facebook and Instagram communities.

The logistics include getting to know the Eagle Rock community — a core of the ongoing work, according to Payton Høegh, a communications specialist for Seeds of Hope and the Jubilee Consortium.

“Jaime is passionate about not coming into the Eagle Rock community or St. Barnabas with a clear vision of what he wants it to be,” he told The News. “He wants this to be a process more about listening to what people need and want from an Episcopal presence in Eagle Rock.

“It’s an exciting adventure to see how community is being built from the ground up; it’s reinvigorating,” he added. “We’ve gone over demographics to the Mission InSite information that gets into what Eagle Rock is looking for in a church community.”

Getting to know the community has meant, for Jefferson, pounding the pavement. “I’ve been doing a lot to try and create community physically, going to different businesses and neighbors, saying hello to people walking by.

“Everywhere I turn, [I’m] trying to interact and let them know what we are doing in Eagle Rock,” he said. “I am most excited about what Eagle Rock needs and trying to fill that and be that for the community.”

A marketing major, Jefferson said he turned down the possibility of another internship to join the St. Be’s team. “I did not grow up explicitly religious, although I had a grandmother who went to church every Sunday,” he told the Episcopal News. “I weaseled my way out of it, played video games, watched TV. Religion and church were always around but I was never immersed in them.

“Then I went off to school and very much went through my atheist ‘I hate religion, it’s ruining the world’” phase before a search for personal meaning replaced academic interests, he said. With the Jubilee year, he realized “I am in it now. I want to start a life of service, and my biggest question is, how can I love people for a living? It’s crazy, how I’ve gone from atheist to church administrator so quickly.” 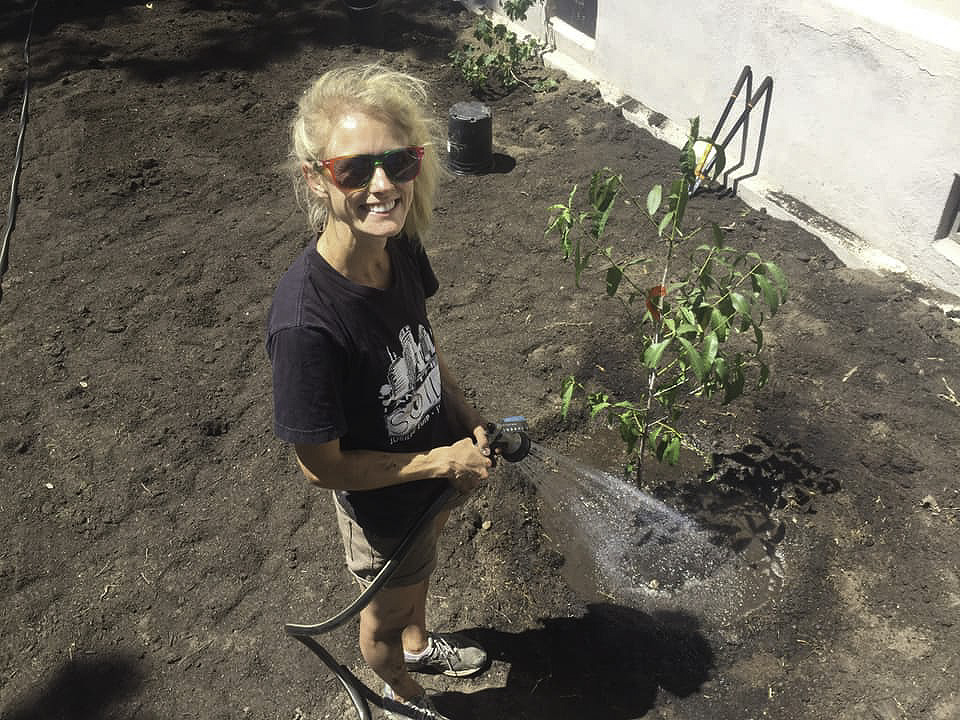 A new tree at St. Be’s gets a thorough watering from a volunteer. Photo: Jubilee Consortium

Talia Guppy, 40, is a St. Stephen’s parishioner who has been attending Thursday evening gatherings at St Be’s for the past few months. The evenings consist of food, music and bible study and Guppy, a L.A. Unified School District psychiatric social worker, says, “I am so invested in my heart and my soul in the mission of St Stephen’s that I would love for the Eagle Rock community to be able to have that same sense of being connected spiritually, with social justice and advocacy and all of it being part of our spiritual walk with God.”

Guppy, who helped deep-clean the St. Be campus, laughingly said it was “like moving into a fixer-upper house where people hadn’t taken all of their stuff. It took four or five of us about three weeks to get it all cleaned up and cleared out. It has been a great experience.”

She added: “I have never been a part of something like this, that’s starting from the foundations. The foundation is there and we are filling it. It feels really neat to be part of it and bring it and be part of this new life. I look forward to it every week.”

Bishop Diocesan John Harvey Taylor shares that enthusiasm.  “Eagle Rock is one of the most dynamic, diverse communities in our diocese – a perfect setting for the Episcopal Church, which at its best combines liturgical and musical richness and multi-cultural and -generational competence with opportunities to serve our neighbors and the whole creation,” he told The News. “Canon Edwards-Acton is deeply devoted to his neighborhood and his church. He and his fellow saints in action are fully equipped by the Holy Spirit to organize and pilot this vital relaunch.”

She said the partnership grew out of a prior relationship with Edwards-Acton. “Jaime and I have participated in many faith-based social justice actions,” she told The News. “Doing justice work has enriched our lives both personally but also has helped to enrich our community.”

Nefesh members have participated in the campus cleanups and Goldberg plans to attend the Sept. 28 launch party. 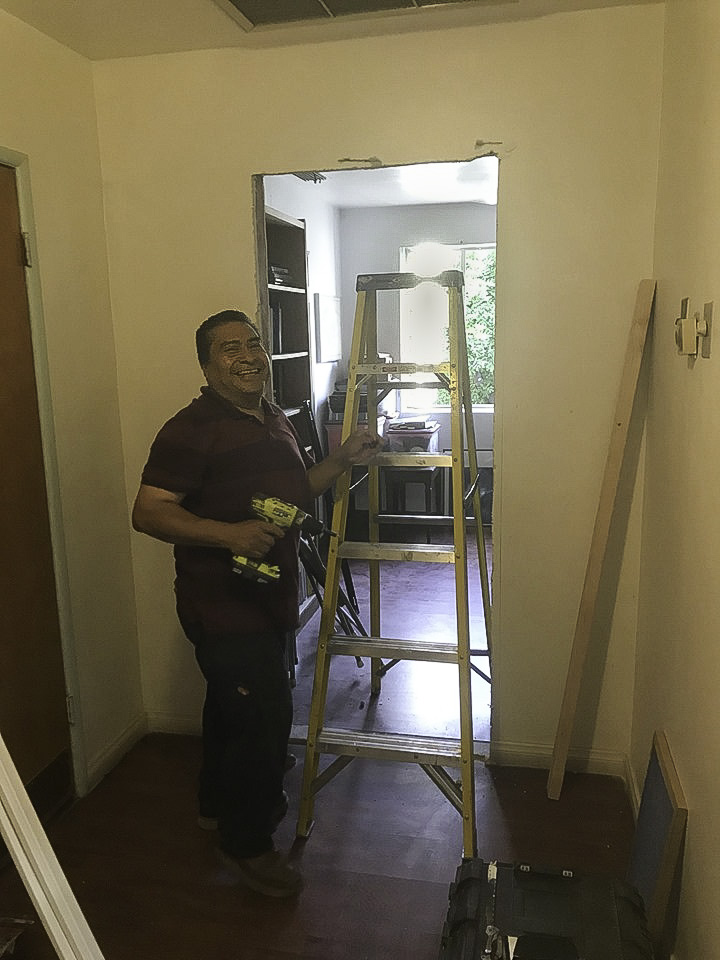 Inside and out, St. Be’s gets a thorough cleaning and repairs. Photo: Jubilee Consortium

“We want to be a part of the energy that’s happening at St. Be’s,” she said. “It is really inspiring, just seeing how they’re doing something as simple as transforming a lawn into a garden holds such possibility for the space, and for Nefesh and for those who live in the neighborhood.

“I’m excited for the community, and for all that’s going to start unfolding at St Be’s.”

Bilingual Spanish and English services are planned, with regular worship at 4 p.m. on Sundays, beginning Sept. 29, according to Edwards-Acton. Painting and other campus improvements are underway. He has hired maintenance staff, a music director and worship band, and plans to launch a preschool.

“This has re-energized me, too, which has been awesome,” Edwards-Acton said. Although there is no congregation yet, and no income, the goal is to work toward building community.

“Our income consists of what we bring in from rental agreements, and we hope to generate income through church hall rentals and fundraisers. Right now, St. Stephen’s is helping financially. We’re willing to make the investment.”

He hopes the diocesan community—laity and clergy—will help support the efforts financially, and through prayers and their presence.

“I am hoping that folks will considering pledging one Sunday a month or a quarter to come and be the presence of Christ to those in St. Barnabas,” he said.

The launch party will include a live band, opportunities to plant seeds in the garden, and campus tours.

The diocesan community is invited to support St. Be’s launch party, from 6 p.m. to 9 p.m. on Saturday, Sept. 28. The church is located at: 2109 Chickasaw Avenue in Eagle Rock.