St. Paul’s Episcopal Church and Shepherd of the Desert Lutheran church, nestled side by side in Barstow, have had a joint ministry since 2012. Its work is dependent on support from the Mission Share Fund of the Diocese of Los Angeles.

The Rev. Mary Tororiey held up a “Peace of the Lord” sign during worship Sunday, June 21, in person and via Facebook Live at the Episcopal-Lutheran ministry in Barstow.

Flipping it over, a masked Tororiey also flashed the customary response, “And also with you,” to 26 people who gathered in-person and to more watching from home.

The congregation was eager to return to worship, said Tororiey, who is entering her second year as vicar of the joint St. Paul’s Episcopal and Shepherd of the Desert Lutheran Church. They have shared ministry since 2012 and, without a mission development grant (MDG) from the diocesan Mission Share Fund (MSF) could not continue to feed the hungry or aid the homeless through Laundry Love, she said.

“In order for us to continue existing in Barstow, and to be able to do the ministries that we do, we depend on the support of the Mission Share Fund,” Tororiey told The Episcopal News recently.

Like many of the diocese’s 37 missions, the congregation is small — with a pre-COVID-19 average Sunday attendance of about 40 — yet vibrant and vital, feeding five times that many local residents with a monthly meal and brown-bag lunches available daily.

The MSF, which represents about one half of the $9.7 million annual diocesan budget, is the primary funding source for the programs, institutions and missions of the diocese, including current MDGs to 26 mission congregations. The grants typically are intended to maintain consistent clergy leadership and for general operating expenses.

A mission congregation receives financial assistance and is incorporated as part of the diocesan structure. A parish, however, is self-supporting and separately incorporated. Typically, a parish calls a rector, while Bishop Diocesan John Harvey Taylor is rector of all mission congregations and appoints a vicar to serve in each on his behalf.

The MSF is the primary funding source for diocesan programs, institutions and mission congregations. About $1 million is awarded yearly in MDGs, ranging from $4,500 to $88,000, and averaging about $31,000, according to Canon Andrew Tomat, diocesan treasurer.

At the June 15 monthly diocesan council meeting, Tomat reported that the MSF is running about $700,000 below the pledged amounts for 2020. At least four parishes — including two of the diocese’s largest — account for about one-half of the shortfall, he said.

He said that often congregations misunderstand the purpose of the MSF, believing it is a tax assessed to pay the bishop’s salaries.

Financial services professional Dan Valdez, chair of the board for the Episcopal Community Federal Credit Union, an economic justice ministry of the diocese, said the grants, plus the Los Angeles diocese’s own pledge to the wider Episcopal Church, amounts to “about $2 million, and that’s before the bishop’s staff has earned a penny.”

The Rev. Michele Racusin, diocesan chief financial officer, told council members the shortfall would drop to about $50,000, if the pledges were paid. Yet, in spite of the shortfall, the diocese has continued to pay its pledge to the wider church, about $608,000 in 2020.

“Almost a quarter of the Mission Share Fund pledges we hope to receive this year are earmarked for our mission congregations,” Bishop Taylor told The Episcopal News. “So any shortfall in giving becomes a justice issue.

“We understand that many of our parishes are under considerable financial stress because of the pandemic. But a family looks out for all its members. It’s all too easy for institutions, even us religious ones, to favor the privileged,” Taylor said. “So my deepest thanks to those who are digging deep in faith and love to make sure we can meet our obligations. Meanwhile, we want to do all we can make sure the diocese emerges from this crisis stronger and more just. Out of our capital campaign and our discernment about restructuring, we want a diocese that, like our risen Lord, always thinks first of those on the margins.” 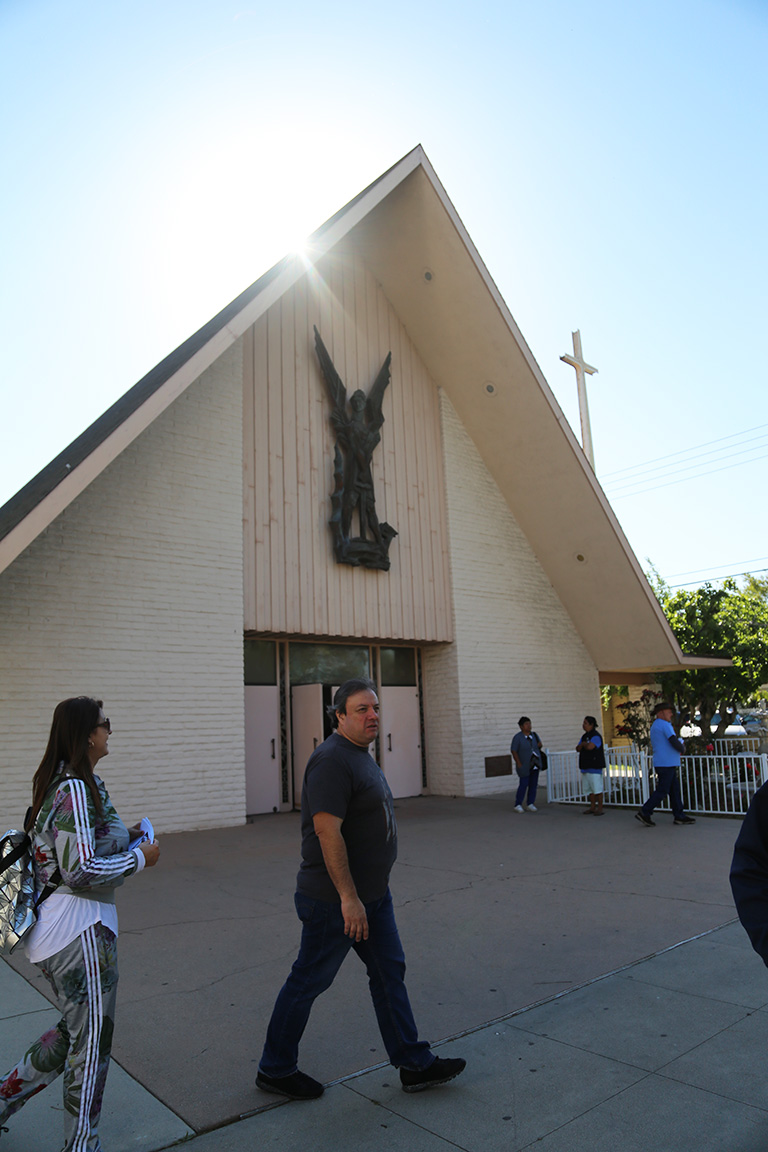 Before the pandemic, St. Michael’s Church, Anaheim, offered four services a day for some 400 people — most of them low-income service workers who have been hit hard by the COVID-19 pandemic. Photo: Janet Kawamoto

Bishop Suffragan Diane M. Jardine Bruce, whose oversight incudes diocesan deaneries 1, 2, 8, 9 and 10, said that she has the opportunity to witness “first-hand the impact the Mission Share Fund has on our siblings from Santa Maria to San Clemente, Santa Monica to Needles” during episcopal visits. Without congregational giving to the MSF, critical ministries like St. Michael and All Angels Church in Anaheim couldn’t survive, or thrive, she said.

“Dynamic mission and ministry meeting the needs of the people in that neighborhood goes on daily,” she added. “This is exactly where Jesus calls the church to be! The MSF enables the diocese to minister in areas of need throughout the Southland — being the arms and face and hands of Christ.”

While pre-COVID-19 average Sunday attendance included about 400 and four services, St. Michael’s members are struggling service industry workers, many of whom are now facing food shortages, eviction and the threat of coronavirus, said the Rev. Juan Jimenez, St. Michael’s rector since 2001. 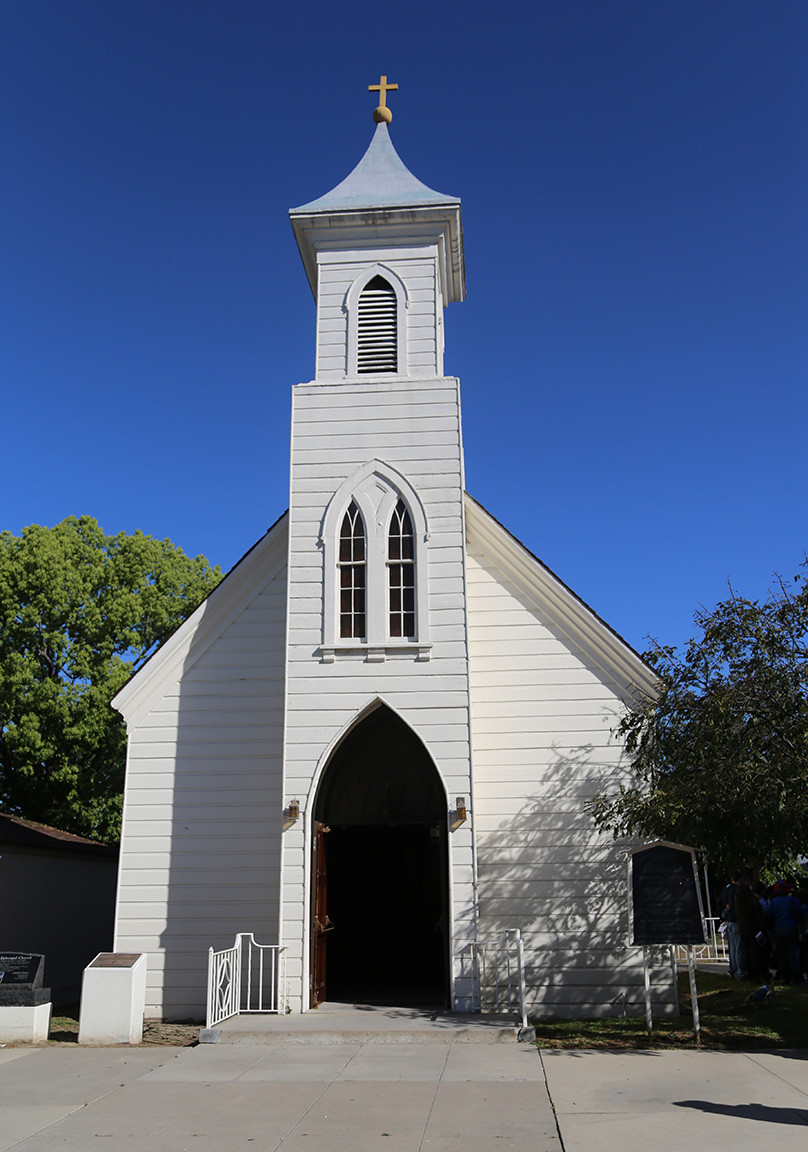 St. Michael’s has served Anaheim for close to 150 years, starting in this church. Built in 1876 and moved to its present location in 1955, it now is a city, county, state and national landmark. Photo: Janet Kawamoto

“Many are not working,” said Jimenez, 75, the sole St. Michael’s priest, who has officiated at as many as 10 services in a weekend. “They don’t have income. The ones that are working are in danger because they have to expose themselves to other people many times without a whole lot of protection. Last week, we had three members of the congregation that tested positive for coronavirus. One is hospitalized in intensive care, the other two are in quarantine.”

Unfortunately, the pandemic’s impact on St. Michael’s is not an anomaly.

Some mission congregations are so economically challenged, they cannot afford the required hand sanitizer and extra supplies needed, when they return to church, according to a diocesan source.

Another mission congregation vicar resorted to preparing and selling street tacos to fundraise for his flock. Another, whose congregation could not afford to pay him appropriately, was forced to live for a time in the church.

Which makes contributing to the MSF a justice issue, according to Taylor and others.

“Our mission congregations are every bit as vital in mission and ministry as our parishes and the fact that they don’t have the financial resources shouldn’t stop them,” she said. “It’s about being related to each other, about being connected to each other.”

“The MDGs make it so that our mission congregations can be all God would have them be. You can’t dream and imagine if you are tired and stressed, and the fact that, as a diocese, we say this is vitally important, tells the world a whole lot about our sense of justice and mercy.”

Valdez agreed. “The question becomes, do we pull out of a neighborhood … simply because they can’t afford to sustain themselves?”

The Rev. Melissa McCarthy, diocesan canon to the ordinary, and a mission vicar for 11 years, said there is a direct effect between nonpayment of MSF and the impact upon under-resourced congregations “who do incredible ministry in their areas.”

“Our mission congregations are doing mission work. So, when we contribute to the MSF, we are contributing to Christ’s mission in the world,” McCarthy said. “It really is money that is going to the work that is bringing God’s love to places where it is most needed now and where it wouldn’t be done otherwise.” 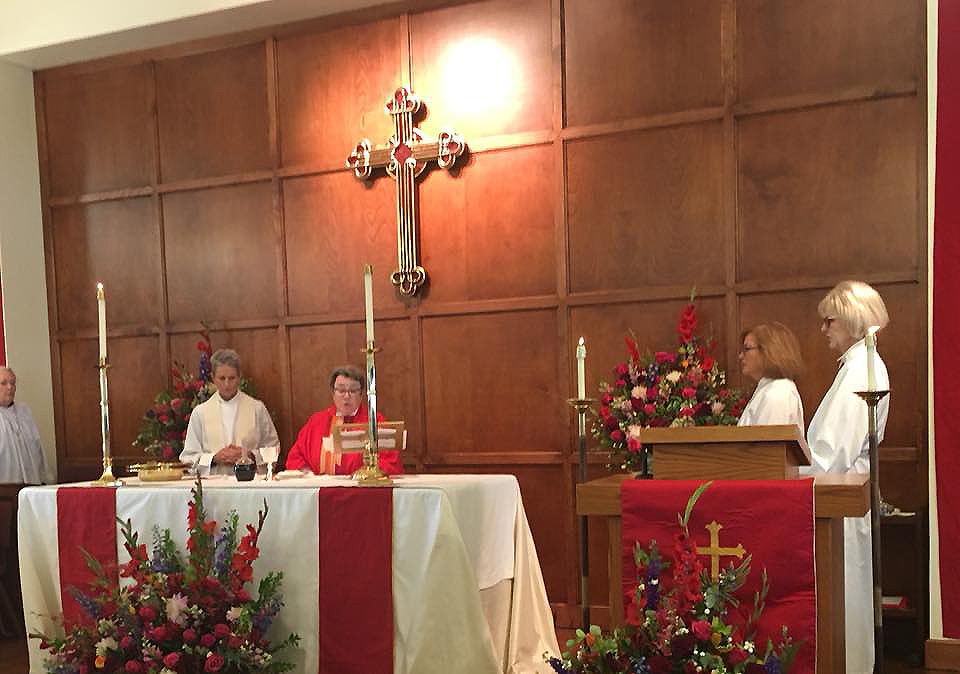 It happened at Faith Church in Laguna Niguel, where the Rev. Dawn Vukich was called as half-time vicar in 2018.

“The church was really starting to struggle” after a three-year rotation of supply clergy. “People were saying, we need to find a church with a priest,” she said. “We want stability. We want to know who to call when there’s an emergency. Families were starting to look elsewhere. The MSF grant afforded the church the opportunity—not only to stay alive, but to grow.”

Faith has launched a Stephen Ministry, begun outreach to the unemployed and underemployed, and partnered with local churches to host a soup kitchen. At about 50, attendance has nearly doubled, “and that’s a big deal for an itty-bitty church,” Vukich said. “It is a vibrant place. Without the grant, the Episcopal Church in Laguna Niguel would be gone.”

In Beaumont, the Very Rev. Bill Dunn, is both dean of a geographic area with at least 12 mission congregations, and has served as vicar of St. Stephen’s Church for 10 years. 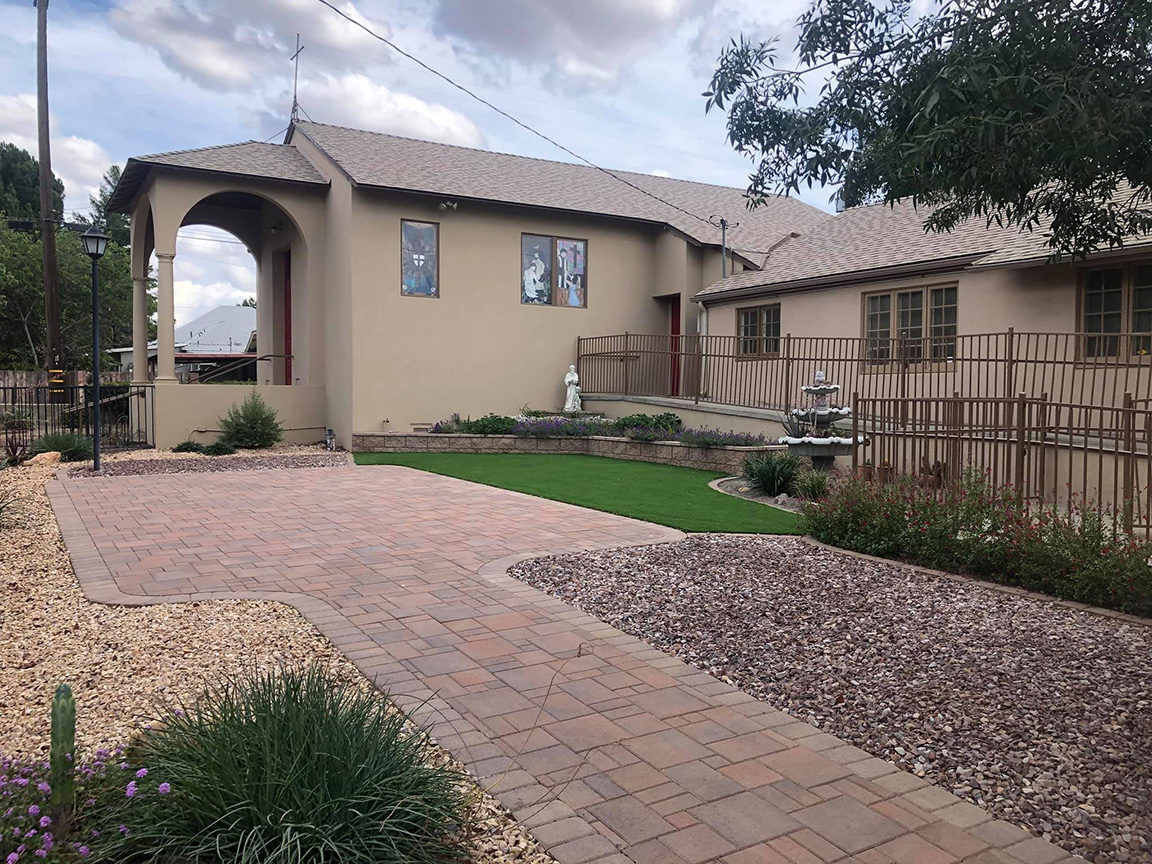 The MDG “lets us breathe a little bit” and focus on food insecurity and other pressing community issues. In 2019, the church’s partnership with local schools and businesses helped to raise $17,000. “That buys a lot of food,” he said, “and a lot of meals.”

Kurtz, rector of All Saints Church in Riverside, said supporting mission congregations with MDGs helps offset systemic inequities. “We know that people of color across the board tend to make less doing the same work,” she said. Often, clergy in struggling congregations are compensated less than their counterparts, do not receive regular pay increases, and the congregations lags in pension payments.

Diocesan historian Canon Bob Williams said the development of the MSF concept dates to the mid-1970s and seeks “to convey a sense of congregations sharing together, in funding common mission.” Some 20 years later in 1996, then Bishop Frederick Borsch and diocesan council noted that while members’ giving to congregations had increased, the level of parishes’ voluntary pledges to the MSF had dropped.

At the time, the rate compared with 20% mandatory apportionments in the Seattle-based Diocese of Olympia and the San Francisco-based Diocese of California. A special convention of the diocese, held Sept. 14, 1996, approved 261-254 a voluntary pledge system with stewardship education and with consultation support from the diocesan council, the system in place today. That formula was reaffirmed in a 2011 vote of Diocesan Convention.

In 2018, under the leadership of Bishops John Harvey Taylor and Diane Jardine Bruce, convention adopted for 2019 a consolidated $9.89 budget that reflected the diocese’s total operating expenses together with revenues received from the Mission Share Fund, the Corporation of the Diocese, and Corporation Sole. The importance of congregations contributing to the MSF the levels set in 1996 was again underscored as foundational to the fiscal health of the diocese.

Prior bishops had addressed shortfalls with grants from Corp Sole or Corporation of the Diocese endowments, a process that is not sustainable, said treasurer Tomat.

According to Kurtz: “Our vicars are some of the hardest working priests in this diocese. And they do the work they do on a very, very tight budget with, in most cases no staff. We have several mission congregations where the vicar is the one who answers the phone and produces the bulletin and writes the sermon and opens and closes the church.”