The Episcopal Chorale: 30 years of music and ministry 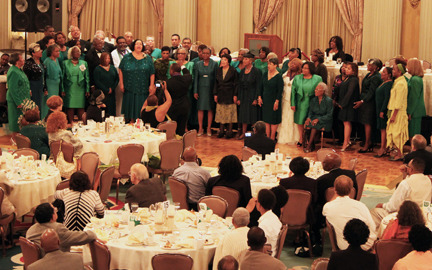 The Episcopal Chorale performs at its 30th anniversary gala on Oct. 13. 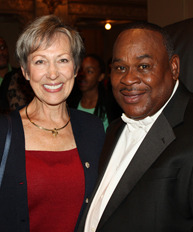 None of which would have happened, by all accounts, without Canon Dr. Charles Cheatham, founder and director, who grew up in Los Angeles and recalls directing his first choir standing on a box at age 4 at the Macedonia Baptist Church.

“I grew up right down the street from St. Philip’s Episcopal Church on 28th Street and I used to be an altar boy, but I also went to the Presbyterian Church as a kid. My parents were Baptist; my grandmother was Presbyterian and I went to church with her,” Cheatham recalled recently during a break from regular Monday evening rehearsals at St. John’s ProCathedral in Los Angeles.

His first professional gig came a few years later, when he left the Presbyterian Church in a huff after being rebuffed for a youth choir director position.

“They told me I was too young. I was really angry, so I went to my mom’s church. They had a position open and they accepted me,” he said, laughing. “They accepted me. And that’s where it started; I was 11 years old.”

Which may explain why, years later, when he founded the Chorale in 1983, he decided to create a scholarship program to include and to encourage young people in the musical arts.

“I have not had a concert in my life where there was not a kid involved in some way,” he says earnestly. “When I was a kid, I performed a lot with adults and I never forgot that.”

He founded the annual scholarship luncheon “after the first year, because I just didn’t feel like we were complete. I said we have to do something else besides singing, so I came up with doing something with the younger people in arts to help them along the way,” he said.

Along the way, he earned a bachelor’s degree in music from the University of California at Los Angeles, and master’s and doctorate degrees from Emory University in Atlanta, and received an honorary doctorate from the City University of the Netherlands.

He was named an honorary Canon of the Cathedral of St. Paul in 1999 in recognition of his contributions to the rich musical heritage of the Los Angeles diocese, where he also serves on the Commissions on Liturgy and Music and on Black Ministries.

His accomplishments are extensive, including: serving internationally as a workshop clinician for children, youth and adult choirs; international guest lectureships from London to Australia to Cuba; and composing an opera, Blackness Yesterday, Today and Tomorrow. He has performed with a variety of orchestras and with celebrities such as Dionne Warwick, Johnny Mathis, Johnny Carson, Nancy Wilson, Mahalia Jackson, Ned Beatty and the Rev. Billy Graham.

Along with the Chorale, he has performed in Vienna, Austria, Australia, Cuba, Italy, Jamaica, Puerto Rico, Spain, Argentina and, China and is planning a 2014 tour to Holland and Germany.

None of which Cheatham is comfortable discussing at any length.

Rather than concentrate on his own achievements, he shifts attention to the “phenomenal” recipients of this year’s scholarships and honorable mentions, who performed at the Oct. 13 anniversary celebration.

The third prize winner was tenor saxophonist Keeland Bowers, 16, who attends the Los Angeles County High School for the Arts and who performed “Angel Eyes” by Matt Dennis.

Honorable mention was awarded to dancers Jalia Washington, 17, of Altadena and Juan Escalante, 17, of Los Angeles, and to pianist Christian Douglas, 12, of Sylmar and violinist Amber Daughtry, 15, of Los Angeles.

Also honored at the Oct. 13 event were: the Rev. Arthur Broadous, a Chorale member who has been music director for choirs at Calvary Baptist Church in Pacoima; Lethia Flowers, a member of Christ the Good Shepherd Church, for her service to others and devotion to church and family; and Dorothy Kelly Gardner, a retired teacher and Chorale member.

Mary Bruno was also recognized for outstanding public service, including advocacy for children, tirelessly working to support the Holy Family Adoption and Foster Care Agency, an institution of the Diocese of Los Angeles, and for developing the “Educate for Hope” program to fund schooling for children in Palestine.

‘We are on our way’ with the Chorale

Michelle Blackmon first met Cheatham when she was 11; he was 14 and directing the youth choir at her church, Mt. Sinai Missionary Baptist Church in San Pedro. They’ve been friends ever since.

“He would have our church so packed they had to put chairs in the social hall and outside in the parking lot,” she recalled recently.

A soprano, she breaks into a gospel processional song, “We are on our way, to a land of brighter days,” remembering her initial audition with Cheatham. “From that time on, he’s supported me; he would come to my concerts and musicals,” she recalled.

“He’s taken us all over the world because of his music and ability,” she added. “I grew up in the South Bay, in San Pedro. Who would have thought I’d be at the Vatican in Italy, singing for Pope John Paul II before he died?”

Blackmon is a founding member of the ecumenical Chorale, which emerged after seven predominantly African American Episcopal congregations in the Los Angeles diocese joined to celebrate a 1983 mass in honor of Absalom Jones, the first African American priest in the Episcopal Church. It has since grown and includes members of various Christian denominations.

The Chorale has always been about family for Beatrice Coleman, a member of St. John’s ProCathedral. She and her mother, the late Mary Jane Coleman, a music teacher, were both founding members.

“Music has always been a part of my life,” said Coleman, 57, on a break from the rehearsal. “It is very profound. This has been an outlet for me also as a way to praise the Lord. I really enjoy being part of it.”

A soprano section leader, she also serves as the repertory coordinator, making sure members have the appropriate sheet music. Recently, she spent hours sifting through historical photos, programs and videos of performances in readiness for the Oct. 13 celebration.

A Los Angeles native who works for Southern California Edison, she’s only missed a few rehearsals in 30 years, she said. “I missed when I gave birth to my daughter” Brandi, now 26 but still known as “the choir baby” and who has traveled overseas with the group.

“I never dreamed I would be standing in the Coliseum in Rome, but being part of this group afforded me that opportunity,” Coleman said, reflecting on the anniversary.

“Or that I’d be singing vocal background for the movie Rosewood; a group from the Chorale did that. Or being in St. Peter’s Basilica and singing a service on one of the high holy days. For a choir that isn’t Catholic, that was something for me.”

And singing “Total Praise” at the Great Wall of China. “At the time, I was thinking that I don’t believe I’m here,” she said, “and I’m just hoping everyone’s enjoying our music.”

“We love each other,” Coleman said of the Chorale members. “We can call on each other when we need support. Everybody really feels something for each other.”

Fifteen-year member Pamm Land said that her role as president of the Chorale is “to help keep that family together and to make sure they’re taken care of.

“My duty is to make sure that Chas’s vision is intact and executed and we’re all on point for that vision. This is his vision, his Chorale, his ministry and he’s very much a shepherd and without him, there is no Chorale.”

Land, 55, an attorney, said the Chorale is “not only a nonprofit but a poor nonprofit and everything we do has to pay for itself. When we travel, all of the members cover their own costs.”

An education in musical technique

It is also provides educational opportunities; each rehearsal begins with a music lesson.

Previously, “I thought singing was the happy joy I experienced in the car, or working around the house doing my chores,” Land said.

“But to sing correctly with excellence is a lot of work. You are reading the word and the note and the director all at the same time; like reading three languages. Those languages come together to make the music.

“And when you sing ‘Jesus Christ is risen today,’ [Cheatham] wants the audience to feel Christ rising. His expectation is that we will do that with our voices.”

And though it may be time-consuming, exacting, and even difficult, the music is exactly what compels her to belong to the Chorale, says Land, a member of the Episcopal Church of the Advent in Los Angeles.

“For me, that’s one of the really beautiful parts of the ministry, how the music touches people and how they respond to it and what that does for them in their personal journey with Christ and how we bring the word to life in a very beautiful and dynamic way.”

Ron Brown, 71, a relative newcomer, said he especially enjoys the lessons at the start of each rehearsal. A self-admitted “not very musically inclined” retired law enforcement professional, he joined the Chorale a year ago at the invitation of a friend.

“I heard him practicing the Messiah and sang along,” recalled Brown, who was so impressed by the members’ dedication that he delayed a planned Mediterranean cruise in order to perform at the anniversary celebration, he said.

This particular evening, the music education class had helped get ready for that performance, with musical cues, mood and emphasis, to sing “Welcome into This Place” in greeting to guests arriving for the anniversary celebration, he said.