Bishop’s Legate for Global Partnerships Troy Elder has spent the past four years building bridges on behalf of the Diocese of Los Angeles, advocating for unaccompanied minors, detainees, and comprehensive immigration reform. 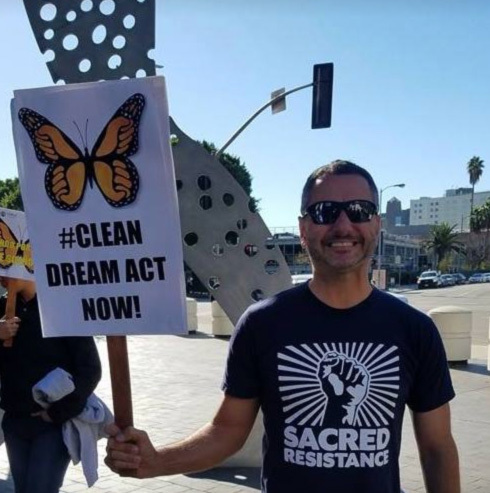 Now he is engaging that struggle on another front.

The human rights attorney concluded his diocesan staff ministry several weeks ago and has begun working full-time for the Immigrant Defenders Law Center (IDLC), a nonprofit organization that defends immigrants of all nationalities against systemic injustice.

“I will be back in court, working up at the detention centers,” Elder told The Episcopal News recently. “I feel like it’s a natural next step to some of the immigration advocacy and human rights work with Central American migrant children I’ve been involved with since 2014.”

He had just attended a June 11 farewell party in his honor at his last official meeting as diocesan staff liaison to the Program Group on Global Partnerships (PGGP), an association he plans to continue as a volunteer.

“I’ve been hired to work on special projects for immigrants with severe psychiatric disabilities,” he said. “I’ve been out of active law practice for the last four years and I’ve been itching to get back into the fray and use my legal skills. And then this opportunity came up.”

During Elder’s tenure as staff liaison for PGGP, the group pioneered a program that connected Southland youth with their Pakistani counterparts, and established Los Acompañeros, which provides support and encouragement to unaccompanied minors, children who made their way without adults through Mexico from Central America to the United States, in search of a better life.

The Rev. Pat O’Reilly, PGGP chair, said Elder energized the program group and “has given us a standard we need to live up to in terms of how we involve ourselves in global ministry.”

“He has put the whole idea of accompaniment and listening to our overseas partners at front and center, so we don’t just go in and do our own project. Instead, we listen to what they need, to what they want, and they come up with their solutions and we see how we can be part of that,” said O’Reilly, who serves at St. George’s Church, Hawthorne.

“But mostly, we are in relationship with them, so they enrich our lives and we enrich their lives, just by being together as Christians in a global setting.

“I’m so glad we’re not going to lose him one hundred percent. We really need a staff person to deal with global issues because we’re such a key diocese in this country. “

O’Reilly said Elder has already visited the African nations of Guinea and Kenya to lay the groundwork for developing projects.

PGGP is carrying on the work of Canon Percia Hutcherson, a physical therapist and missionary who on her frequent medical missions to Eldoret, Kenya, treated many people with orthopedic disorders. When Hutcherson died January 9, 2018, the PGGP became involved in her ministry to the disabled, O’Reilly said.

In 1990, the late Anglican Bishop Muge invited Hutcherson to serve as a missionary and, along with diocesan staff, to develop a community-based approach to treating those with disabilities. That work led to creation of Changing Lives Foundation, and establishment of six clinics.

The PGGP also supports partnerships in the Greater Middle East, in Jerusalem and Pakistan, Haitian schools, and with the Anglican Church in Aotearoa, New Zealand.

O’Reilly said the PGGP’s approach is more of an accompaniment role with various ongoing projects. Others include the Conejo Compassion Coalition, involved in Haiti, Puerto Rico and Uganda, as well as the diocese’s companion relationship with the Diocese of Cuernavaca in Mexico.

Additionally, the group is involved with refugees outside of the United States. O’Reilly explained that while the sanctuary movement deals with the refugee crisis in the United States, “there are a lot of refugees coming from Honduras, El Salvador, Guatemala, to Mexico. Often they are exploited and abused. We are working with supporting and advocating with people who run shelters for unaccompanied youth and other vulnerable refugees in Mexico.”

O’Reilly said she recently heard from a teen-aged girl she befriended and encouraged through Los Acompañeros.
She “had come from El Salvador as a teen. She lived in gang territory. A child next door to her was murdered. She had been abandoned by her father; her mother was here. When she first arrived, she was so insecure, having nightmares. She didn’t know a word of English.

She now is a legal resident. “She is confident, beautiful and she just graduated from Bell High School,” O’Reilly said. “She contacted me to ask me to come to her graduation because I was really important to her.”

Elder’s previous work in Jeremy, Haiti — prior to his tenure with the Los Angeles diocese — led to the establishment of a law clinic “because there are no public defenders in Haiti, so people just languish in horrendous jails,” O’Reilly said. “The clinic is a lifeline for so many people.”

She described Elder as “committed, intelligent, always thinking ahead and recognizing the legal and financial implications of everything we do. He knows how to maintain and promote relationships globally, which is really tremendous. He is a person of deep compassion and works so hard.

“He’s just been amazing. We would not be where we are if it weren’t for Troy. Troy has really made us a global partnership. Before, we each were people on the committee interested in particular areas and would relate to each other about our area and then we’d have a conference once a year, but most of the people that attended were us.

A life of service, advocacy

Elder is “grateful” for his tenure at the diocese and working with two bishops diocesan, Jon Bruno and John Taylor.
There is a special connection between the diocese and IDLC, he added; Bishop Bruno provided a $200,000 loan to aid the nonprofit’s start-up about three years ago.

“It’s my understanding that when the folks, the attorneys at the Catholic legal services, Esperanza, decided to strike out on their own … Bishop Bruno made them a $200,000 loan. It’s a nice connection. There is a Bishop Bruno conference room in the office downtown,” he said.

Elder, a 1995 Yale Law School graduate, said he is profoundly grateful for the opportunities of the past four years and is eagerly anticipating continuing the relationship.

Prior to coming to the diocese, Elder, 49, was admitted to the bar in New York in 1996, in Paris in 1999, and in Florida in 2001. He was clinical associate professor of law at Florida International University College of Law in Miami, where he founded Miami’s first public, law-school based legal aid clinic representing torture victims, asylum seekers and neglected juvenile immigrants, among others.

A Michigan native, he holds a bachelor of arts in political science and French from the University of Michigan, having also earned a certificate and high honors from the Université d’Aix-Marseille II. He speaks fluent French and Spanish, and conversational Haitian Creole. He also holds a master of arts in religion (ethics) from Yale Divinity School.

“I look forward to continuing in a new capacity the important work of world mission for this diocese, which has really been thriving in recent years under the leadership of the Rev. Pat O’Reilly,” said Elder, who is married to the Rev. Lorenzo Lebrija, diocesan development officer.

Elder knows he faces an uphill battle. Many detainees, except for those with mental disabilities, don’t have the right to bring a lawyer with them to court proceedings.

“These people are incompetent to stand trial, incapable to defend themselves and I’m … basically serving as a court-appointed lawyer in a narrow-type case we hope to expand,” he said.

“I’m proud and privileged to be part of a relatively new group of attorneys for some of the most vulnerable members of our society in cases that are really life and death for them and for their families and those in their community who love them.

“The cases I am working on, folks with several psychiatric disabilities at risk of deportation, face certain death if they are returned. It is tantamount to torture.”

Acknowledging the challenging context of his work, Elder said he and his colleagues at IDLC “are working very closely with Southern California legislators and others at the national level in an attempt to respond to scandalous actions that this government is taking, in terms of ripping babies out of their mother’s arms.”

The office also organized a rally in front of City Hall recently to protest recent actions by border patrol in separating families. Protestors were asked to bring their children. “It was a very powerful statement.”

“You’re taking someone’s child,” said Elder, referring to the border patrol’s actions. “It is outrageous and horrific and this society will live to regret it because kids ripped from families — the data’s out there — will have a huge uphill battle.

“It is a challenging context in which to resume this work but one to which I feel privileged and humbled to be called and maintain a foot in my environment of the ministries of global partnership and world mission that are so robust.

Speaking of his new position, Elder said, “I’m rejoining this fray at a very critical and difficult time. In addition to children’s [issues], the attorney general proclaimed we weren’t going to recognize victims of domestic abuse. It’s been a really sobering and challenging first couple of weeks to hit the ground in this very oppressive and uphill-road posture.”