Presiding Bishop tells young Episcopalians: ‘We must help America find its soul’ Michael Curry challenges the church to get ‘souls to the polls’ with voter education drive 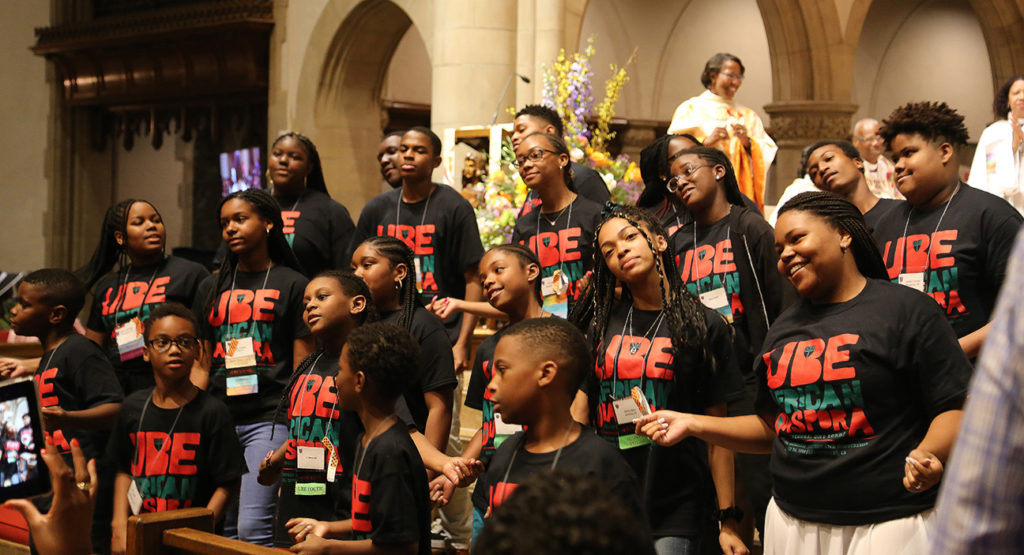 A UNION OF BLACK EPISCOPALIANS YOUTH WORSHIP SERVICE became a call to action July 24 when Presiding Bishop Michael Curry took the pulpit at All Saints Church in Pasadena, California.

Curry urged the UBE leaders, youth, several hundred local worshippers and visiting conference-goers to consider, “between now and next year, leading a massive voter registration and education drive and a get-out-the-vote campaign.”

Frequently interrupted by applause and shouts of “amen,” he emphasized, “This is not a partisan statement. We can’t tell people how to vote. That’s not right. But we can tell people, ‘You must vote.’

“It is a Christian obligation to vote, and more than that, it is the church’s responsibility to help get souls to the polls.”
Casey Jones, 26, a campus missioner at St. Michael’s University Church in Isla Vista, California, said he had invited a friend to the 7 p.m. worship service, which showcased about 60 youth and young adults attending UBE’s 51st annual conference who read lessons and prayers, danced and sang.

It was his friend Chris McCroy’s first visit to an Episcopal church, to which Jones said, “I can’t tell you the pride that I felt in bringing him with me there and hearing what Bishop Curry had to say.

“How rich in both the Episcopal tradition and the African American tradition his sermon was, and how he holds both of those things in a way that makes me be myself, and makes me proud to share my church with others.”

For McCroy, 25, a UCLA graduate student, Curry’s sermon felt “absolutely phenomenal. I was totally blown away by how beautifully he intertwined our need to be connected through our ancestors.

“I took to heart his analogy of our ancestors being like rocks, and how important it is to understand where we’re headed and how to address social justice and the spiritual problems going on in our society and our need to be connected to these rocks, the rocks of our ancestors. I especially appreciated that he’s not trying to be political, that we are dealing with moral issues.” 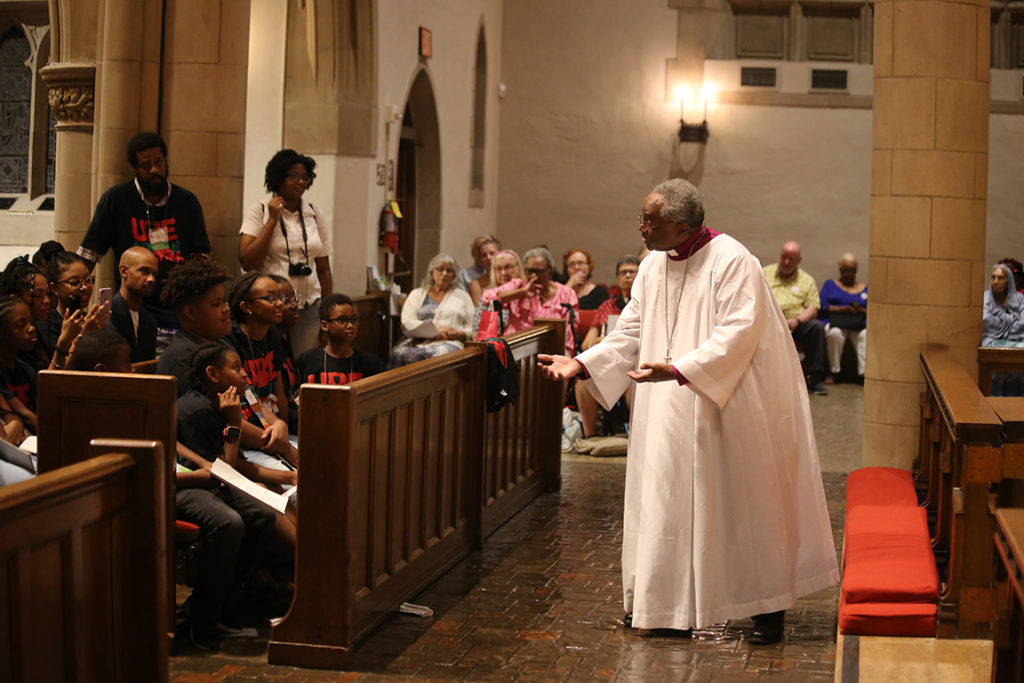 ‘Look to the rock’

Echoing the conference theme “Preparing the Way for Such a Time as This: Many People, One Lord,” Curry invoked the prophet Isaiah’s advice to draw strength from those who have gone before to create transformation.

In a sermon laced with laughter and peppered with applause and “amens,” Curry stepped in and out of the pulpit and engaged worshippers in call and response. He quoted from Isaiah 51, hymns, Harlem Renaissance poet Langston Hughes, jazz singer Billie Holiday, author Alex Haley, and national forefathers Thomas Jefferson and Abraham Lincoln. He even led a rousing chorus of the classic Frank Sinatra song, “That’s Life.”

“Isaiah writes, ‘Listen to me, you who pursue righteousness, you that seek the Lord. Look to the rock from whence you were hewn and to the quarry from which you were dug. Look to Abraham your father and to Sarah who bore you,’” Curry said.

He continued, “The songwriter said it this way: ‘My hope is built on nothing less than Jesus’ blood and righteousness. I dare not trust the sweetest frame but wholly lean on…’”

“‘On Christ the solid rock I stand, all other ground is sinking sand,’” Curry added.

Repeating the rallying cry of “look to the rock,” Curry recalled the need to persevere and work for future change, even when present hopes seem dashed “on the altar of reality.”

“They [the Jewish people] had such hope when they remembered how Moses led them to freedom. They had such hope when Miriam took the tambourine and danced and sang, ‘the Lord has triumphed gloriously. The horse and the rider, he has thrown into the sea.’ They had hopes and then, in a moment, in the twinkling of an eye, about the year 586 B.C. or so, their hopes were dashed. There was an election.”

As the congregation laughed and applauded, Curry quipped: “I’m not being political. I’m just being biblical. I’m staying in the Bible.”

Weaving the African diaspora experience with the biblical story, he recalled the defeat of Jerusalem by the Babylonians, who exiled and enslaved the Israelites. “They had hope when the Civil War ended and Reconstruction began,” he added. “They had hope, but then Reconstruction ended and there were hooded night riders and Jim Crow was born.”

The world for the Jewish people, as for members of the African diaspora, had fallen apart. Curry said, “This was the time James Weldon Johnson (author of “Lift Every Voice and Sing”) said, ‘when hope unborn had died.’”

But hope rises afresh. “When times are hard. When the world seems to have gone crazy, ‘look to the rock’ … and find God.”

He added: “See, the African ancestors understood this. They understood you could be riding high in April and shot down in May. And, if you don’t believe them, Frank Sinatra understood that one.”

Curry then led the congregation in singing: “‘I’ve been up and down and over and out and I know one thing. Each time I find myself flat on my face, I pick myself up and get back in the race. That’s life.’”

He added: “And, if you don’t believe Frank, ask Jesus. You can ride into Jerusalem on Sunday and be on a cross on Friday. But if you look to the rock, you know Easter’s always coming.” 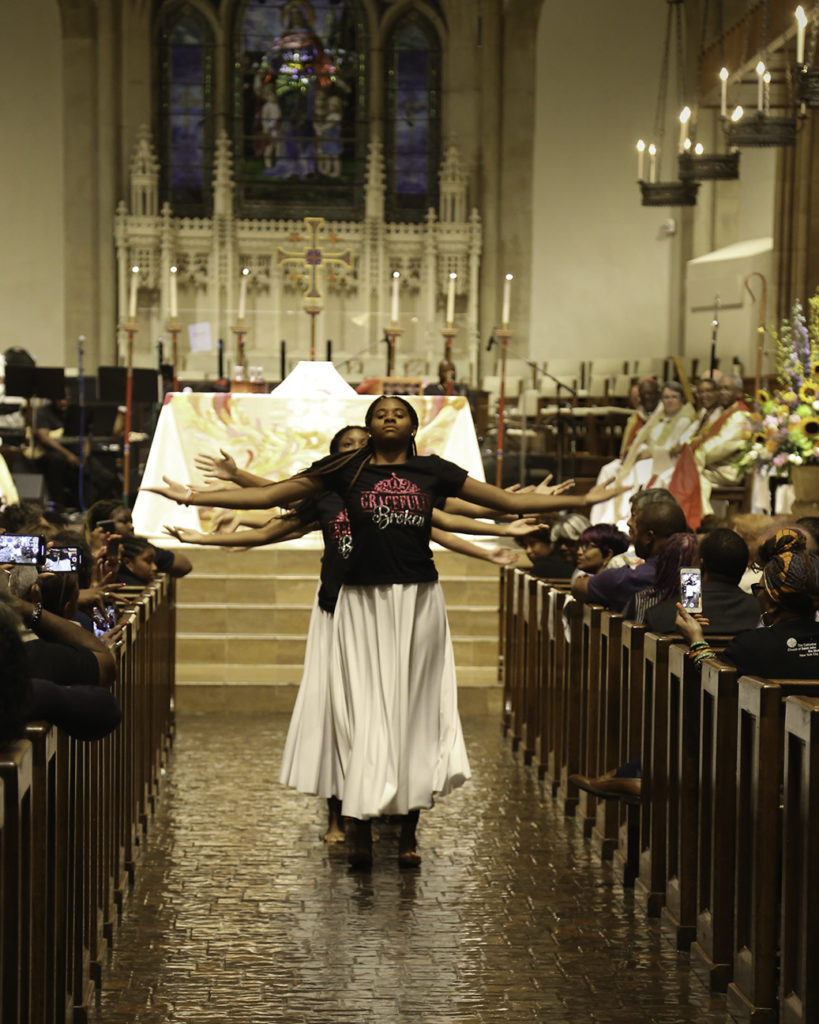 A call to action

Jesus started a movement, not an institution, Curry said. Jesus charged his followers with the Great Commandment, to “Love the Lord your God with all your heart and all your soul and with all your mind. Or, as Billie Holiday would say, ‘all of me. Why not take all of me?’”

Soberly, he added: “I love this country. I love her enough to speak truth.”

He then painted a chilling portrait of current realities, including the child-parent separations at the U.S. border, a rise in hate crimes, attacks on places of worship and a recent political rally led by President Donald Trump.

Curry said, “Something is fundamentally wrong when crowds chant about a congresswoman, a Somali American, and say to ‘send her home,’ and when the president of the United States says, ‘You need to go back home,’” to four congresswomen of color who have been openly critical of him.

“This is not a partisan statement, this is a moral statement,” he said. “Something’s wrong. We must help America, this country we love.”

The nation’s core principles — as described in the Declaration of Independence, in Lincoln’s Gettysburg Address, at the Statue of Liberty and in Langston Hughes’ poem “I, Too” — are quintessentially what this country is about, he added.

“When we are debating and trying to decide what to do with our borders … ask that green lady with that torch in her hand,” Curry said. “‘Give me your tired, your poor, your huddled masses yearning to breathe free.’ That’s America. We must help America find its soul, help America look to its rock.”

And when getting “souls to the polls” he added: “Tell them to cast your vote, not on a partisan basis, not based on your biases, but vote your values. Vote the values of human dignity and equality. Vote the values of the rock on which this country was built. Vote.”

Curry then spoke directly to the youth, recalling a scene from Alex Haley’s “Roots,” in which enslaved African Kunta Kinte lifts his infant daughter to the night sky and whispers in her ear, “‘Behold the only thing greater than yourself.’”

“Lift up your head and behold your God,” Curry said. “You are a baptized follower of Jesus Christ. Follow in his footsteps. Live his teachings. Walk his way of love. Stand up for Jesus. Lift up your head and then face whatever this world presents you with. Walk together, children. Don’t get weary, ’cause there’s a great camp meeting in the Promised Land.”

All Saints Church has posted a video of the presiding bishop’s sermon online here.

Originally published by Episcopal News Service, for which the Rev. Pat McCaughan is also a senior correspondent.