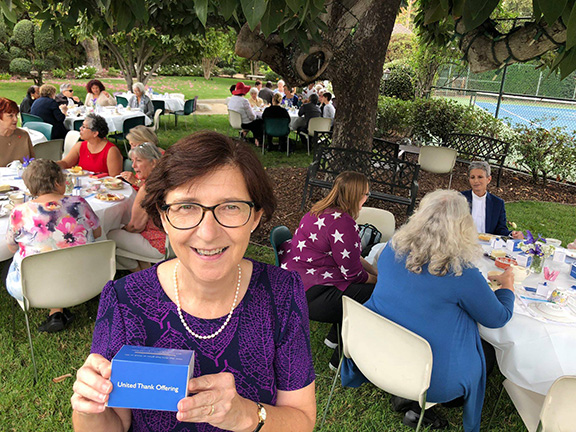 Diane Askren, United Thank Offering coordinator for the Diocese of Los Angeles, displays one of UTO’s iconic blue boxes during a tea for UTO representatives from congregations on Oct. 6 at the episcopal residence in Pasadena. Photo: John Taylor

Beginning on Sunday, Nov. 4, in churches all over the Episcopal Diocese of Los Angeles, it will once again be “blue box” time. Parishioners will assemble their United Thank Offering mite boxes and spend the month of November accumulating thanksgivings and spare bills and change as part of the UTO Gratitude Challenge.

“This is the time for us to focus on the process of daily acknowledging our gratitude for life’s blessings and thanking God for all that has caused us to feel gratitude in our hearts,” says Diane Askren, UTO coordinator for the Diocese of Los Angeles, who spoke at an Oct. 6 tea for UTO representatives at local congregations, held at the Pasadena home of Bishop John Harvey Taylor and Kathy O’Connor. She suggested an alternative to the traditional method of dropping coins into the UTO mite box to express gratitude.

“During the Ingathering take time each day to write down on a piece of paper what you feel gratitude for,” she said. “At the end of November, reread each of those notes and make your offering in response to what you have written down.”

In its earliest years in the 19th century, UTO, organized and run entirely by Episcopal women, was at times the largest single source of funding for The Episcopal Church’s missionary work. Today its grants support state-of-the-art ministry on the leading edge of the #JesusMovement. A short history of UTO is here.

Askren told the Oct. 6 gathering that $1 million in grant applications went unfunded last year. This year, UTO wants to raise those extra funds and more. UTO has provided a calendar to assist in this effort. Each day of the week has a consistent theme throughout the month (and resources are organized by day of the week), but the focus will change from week to week. For the calendar and more information and resources for the ingathering, click here.

UTO’s “blue box” mite boxes and other supplies can be ordered from ShimaofNavajoland.com, or call 928.729.5540. The items are free, but shipping charges apply. The boxes usually arrive in four to five days. For other resources visit the United Thank Offering website.

Anyone interested in serving as a parish or mission UTO coordinator should speak with clergy and lay leaders, then contact Askren at jdaskren55@gmail.com. Askren also is available to speak about UTO and its work at congregations of the diocese.