Early in the first round of our diocesan reconciliation process, which got underway in mid-April by introducing or reintroducing us to systems theory, Richard Blackburn of the Lombard Mennonite Peace Center asked a clarifying question: “How many times during this conflict [over St. James, Newport Beach] did you say to yourself, ‘What a great opportunity for a healthy response!’?” 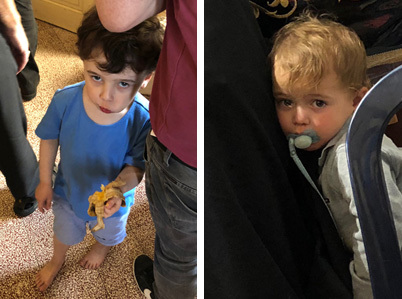 At left: A Palestinian boy in Nablus; at right, an Israeli boy in Hebron. Photo /John H. Taylor

Perhaps you haven’t attended a “Healthy Congregations” workshop. Maybe you think you don’t know what systems theory means. But you do — because you know how abandonment, addiction, or other family-of-origin trauma has affected you or someone you love. You know what it’s like when family members in conflict stop communicating (Richard and his fellow experts call it “emotional cut-off”) or a loved one grows so dependent on others’ approval that she won’t take a stand for what’s right.

As in our families, so too in our churches and diocese. Systems theory helps lay and ordained leaders experiencing conflict value their dependence on others without neglecting their own ethics, values, and mission, enabling them to keep calm and focused and react graciously, healthfully, authentically, and lovingly. In short, systems theory teaches people to be “differentiated.” Christians construe the path to differentiation as a pilgrimage toward Christ’s essence — a mindset and lifestyle of love, righteousness, humility, graciousness, forgiveness, and sacrifice of self for the sake of others and the glory of God.

At St. Michael and All Angels, Studio City, I asked Richard if systems theory could be used to rationalize bad behavior by blaming it all on trauma or hurt feelings. What about a situation that’s black and white? “Yes, there are always people who have been engaging in destructive behavior,” he said. “But you’ll always find that others in the system have been permitting the behavior.”

And while someone else’s destructive behavior might explain mine, it never excuses it. That’s why families and congregations have to dig deep toward the roots of their painful dynamics. That will be the work of “Conflict in the Church,” the second phase of reconciliation, with two-day workshops in May and June in Orange, Altadena, and Oak Park. You can sign up here.

The year-long process is being ably overseen by Canon to the Ordinary Melissa McCarthy. I give thanks that our diocese has the resources to undertake such holy work. In Christ, if not always in practice, we are one community despite our geographic and especially socio-economic diversity. I pray that our pilgrimage of reconciliation will give us a deeper appreciation of our accountability to and responsibility for one another as we move forward together as people of the saving gospel of Jesus Christ.

Reconciliation’s failure can be heartbreaking, even deadly. The trauma shared by the people of Israel and Palestine was evident during our fact-finding delegation’s 10 days of meetings in April with policymakers, opinion leaders, and aid workers on both sides of the conflict. We were 14 bishops, laypeople, and priests, traveling under the auspices of Christians for Fair Witness on the Middle East. Narratives of loss and hope moved us to tears again and again.

Palestinians are traumatized by Israel’s 1948 War of Independence, which they call the Nakba (the catastrophe), when up to 900,000 lost their homes. Israelis are traumatized by the Second Intifada (2000-2005), in which 1,100 died and 3,000 were wounded. These and dozens of other instances of violence, in shared territory not much larger than New Jersey, are fodder for headlines and a vicious cycle of recrimination and mistrust.

Back to my question to the Lombard Center’s Richard Blackburn about whether there are sometimes just questions that are black and white. In the Middle East, as in all places where people seek security and justice and battle for power and payback, one can of course pinpoint acts of oppression and atrocity. But in the name of Christ, none of these events can be used to justify another. More than any other single factor, the shared agony and resulting emotional cut-off experienced by the whole family in the Holy Land makes achieving peace in the birthplace of the Prince of Peace one of the hardest things in the world.

Please pray for reconciliation and unity in the Diocese of Los Angeles. Pray for the peace of Jerusalem.