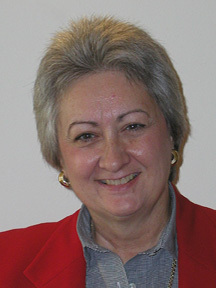 [Episcopal News Service] The National Association of Interchurch and Interfaith Families (NAIIF) has given its annual “World Interfaith Leader Award” to the Rev. Dr. Gwynne Guibord from the Episcopal Diocese of Los Angeles, according to a news release from the organization.

The Rev. Michael and Barbara Slater, NAIIF founders and co-chairs, said their panel of judges selected Guibord because she “demonstrated extraordinary national leadership, courage and a capacity for inspiring in others the urge of interfaith dialogue and cordial relations between faith communities”.

“My work in ecumenical and interfaith arenas is born out of a love for God’s gift given to us in one another,” Guibord said Feb. 12. “To be honored for it by organizations such as NAIIF is a gracious acknowledgment of the work and I am grateful and upheld by it.”

This award was presented to Guibord from the TAMBO Retreat Center, a ministry of NAIIF in Stagecoach, Nevada, on Feb. 11. “The purpose of this award is to enhance awareness of the critical role of religious dialogue in the pursuit of world peace, as well as to provide support for the furtherance of these activities,” the Slaters said.

“The Rev. Dr. Guibord has worked with many Christian denominations, Muslim, Hindu, Buddhist, Jewish, Baha’i, Zoroastrian, Native American, etc., leaders and organizations for a deeper, broader and more inclusive understanding of religion; seeking unity that celebrated diversity; and attempted to overcome prejudices and stereotypes passed on to us from previous generations,” Michael Slater added.

“The challenge for us all is to comprehend how to live together with our seriously different traditions in loyalty and trust and Gwynne Guibord worked in this direction through dialogue, thus bringing us mutual enrichment,” Barbara Slater said.

Guibord is involved with interreligious matters at a national level and serves as a consultant for the Episcopal Church Office of Ecumenical and Interreligious Concerns.

She represents this church at the National Council of Churches Interfaith Commission, where she co-chairs the NCC’s Christian-Muslim dialogue,” said Tom Ferguson, interim deputy for interfaith and interreligious concerns for the Episcopal Church. “She also represents the Episcopal Church at the national Christian-Jewish dialogue, as well as serving as an important theological resource to address issues with interreligious concerns.”

Guibord was a member of the theological task force charged with writing the formal theological position of the Episcopal Church to articulate the justification to uphold and be engaged in interfaith work, which was adopted by General Convention 2009 as resolution A074. She also served until recently as the ecumenical and interreligious officer for the Episcopal Diocese of Los Angeles.

NAIIF is dedicated to enabling interchurch and interfaith families and couples to grow in understanding and live in harmony through accepting and understanding the differences and discovering the similarities. They describe interchurch couples as families from different Christian traditions, and interfaith families as people from different faith traditions.

— The Rev. Pat McCaughan is Episcopal News Service correspondent for Provinces V, VI, VII and VIII and the House of Bishops. She is based in Los Angeles.