Voices of Justice: Attorney Jane Stoever supports and empowers abuse survivors ‘when home is not a safe place’ 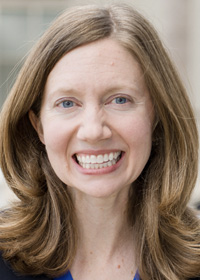 Jane Stoever views her service as director of the domestic violence clinic at the University of California at Irvine as holistic and transformative – supporting and empowering abuse survivors, teaching the law students who seek justice for those clients in court, and advocating for protective policies and legislative changes to a system that can victimize rather than restore.

The clinic’s work, says Stoever, a parishioner at St. Andrew’s Episcopal Church in Irvine, has become even more critical since incidences of domestic violence and technology-enabled abuse have spiked during the pandemic. “Gender-based violence was already at pandemic levels before Covid-19,” said Stoever. “It’s a basic human rights issue … key to all the ways in the world we think about justice – can I be safe in my home?”

While during the pandemic “the message of ‘stay at home’ has been so important broadly for public health, we also have to recognize that home is not a safe place for some.”

Technology-enabled abuse involves ways in which technology can be leveraged to exert power over another person, she said. “It can be stalking someone through technology or tracking their movements or constantly checking on them, keeping tabs. It might be that your partner has your passwords and has been impersonating you or posting information that is embarrassing.”

Stoever is featured as part of The Episcopal News’ ongoing “Voices of Justice” series highlighting the vocations of Episcopalians who are effecting positive community change.

There is a role for clergy and for the church, to create awareness and to help educate about domestic violence, which is both hidden and prevalent, she said. Shame often keeps victims silent, yet one in three women and one in seven men will experience violence by an intimate partner.

One in three teenage girls will experience teen dating violence and one in five college-aged women will experience sexual violence. Yet 97% of teens will never report the violence to an adult.

More than 85% of victims are women; over half of women who seek to leave abusive relationships fall below poverty line. Domestic violence is the number-one cause of homelessness for women and children.

Because of the statistics, clergy “should assume a number of their congregants have had a significant experience with domestic violence, or even a current one,” Stoever said. 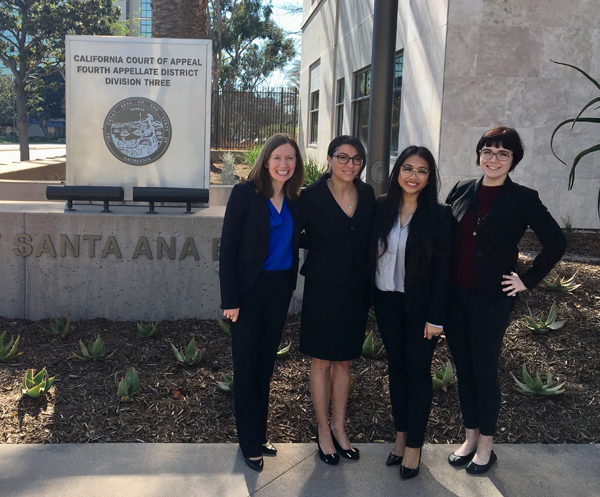 Jane Stoever and several of her colleagues from UC Irvine’s domestic violence clinic pose outside the Santa Ana courthouse.

A mentor to survivors, law students

For Virginia, 46, a domestic abuse survivor whose last name is withheld to protect her identity, UCI’s clinic and students “were amazing. They went to court for me. They filed documents. I had several hearings about custody and child support, and they were there for me for everything. They sat with me inside and outside of court and it was great.

“At the time, I didn’t know who I was, I didn’t know how to stick up for myself,” she recalled. “I was scared. They just held my hand through the whole thing. It was really, really comforting. I don’t know what I would have done without them. I wouldn’t have been able to afford a lawyer at all.”

Stoever is also director of the UCI Initiative to End Family Violence and was honored in 2019 as an “Outstanding Supporter of Prevention” by the Irvine Prevention Coalition and also as an “Everyday Hero” by the Orange County Women Lawyers Association.

She and Patricia Cyr, clinic co-founder and an adjunct professor of law, supervise second- and third-year law students who represent clients in the Lamoreaux Family Court in the city of Orange, an in-person court even during the pandemic. Students are enabled to represent clients by using Stoever’s and Cyr’s bar registration numbers.

“We’re there at every stage of courtroom activity and the students are not permitted to give legal advice until approved by us,” Cyr told The Episcopal News. “We are monitoring, shadowing and assisting with every aspect of representation. The model is for us to prepare the students so well that they are able to do it and for us to be at their side making sure all goes well for the client.”

She added: “We love what we do. We feel like we are creating a whole army of young lawyers who will go into the practice of law with this holistic training.”

Usually, she said, “we are the first person to listen to clients tell their whole story and believe them. Even if we lose the case, clients say that just the fact that we’re standing with them, arguing on their behalf is transformative. Others don’t do that. Often, their abusers have been making all their decisions for them. We look at them, and say, what do you want to do? It’s a moment they realize they are in charge of their lives now. We support their choices. For me, that’s gratifying.”

Enrolling in the clinic is a required class, but third-year student Christa Millard, 29, is so passionate about the work, she received special permission to take a third class.

And she wants to continue assisting survivors pro bono after her May 2021 graduation. “It’s not just about filing briefs and giving opening and closing statements,” said Millard. “A lot of it is about helping survivors find secure housing, or food sources, or empowering them to get back on their feet.”

She was drawn to the clinic because of her own experiences, she said. “This was not an area of law I ever planned to be involved with, until my personal experience really impacted me. A lot of advocates are drawn to domestic violence work or are passionate about it because they’re victims or survivors themselves. People who have lived through those experiences want to very passionately advocate for others who have suffered in the same way.”

The clinic represents dozens of clients yearly, receiving client referrals from four local agencies, including Laura’s House, which provides emergency shelter, transitional housing, legal services and counseling to survivors and their families. Cyr is a member of the Laura’s House board of directors.

Margaret Bayston, Laura’s House director, said the clinic offers phenomenal assistance, and not just in obtaining restraining orders, but in follow-through, “with full legal representation, which is truly amazing for our clients,” including custody hearings, and divorce proceedings, which frequently involve immigration cases.

“Can you imagine facing your abuser, for the first time since you left and how extremely traumatic that is? To have an attorney there to advocate for you and be on your side is truly a gift, because most of our clients can’t afford it.”

There are also opportunities for advocacy and legislative change, said Stoever. “When you see some of the barriers in the law, then you also want to address and help overcome those barriers.”

Min, a Democrat, has introduced a legislative package to protect domestic abuse survivors from financial disenfranchisement and reproductive coercion. Senate Bill 374 would make California the nation’s first state to recognize reproductive coercion – attempting to control the reproductive choices of another – as a form of domestic abuse. Senate Bill 373 would seek to protect survivors from financial abuse, such as being forced to run up credit card debt.

Though it’s challenging, Stoever finds “hope and joy in this work, being able to carry out people’s goals and see their long-term thriving.”

Like Virginia, who says the past six months have been “the best in my life. When you leave a relationship like that, you don’t know who you are.” The student passion gave her “a sense that they would be there for me whether they were in school or not.”

Another client, Mary, whose real name is withheld for her protection, said the clinic redeemed what had seemed like an impossible situation.

“They offered to help me, free of charge,” she said. “At the time I didn’t have a lot of money. They said, ‘we’re here to support you.’ I was so happy someone would reach out to me, because I had very little support on my own.”

Clinic staff helped her obtain a restraining order, accompanied her to court appearances and shepherded her through a divorce. They “empower the vulnerable and oppressed,” she said. “They help people to overcome situations that seem really impossible, especially situations where you’re isolated alone without any kind of funding or financial support.”

Now, her life is “fabulous. I am no longer in an unhealthy relationship. I cut those ties. I am much healthier myself. I have healthy boundaries. My kids are doing well. They really gave me a second chance.

“The student lawyers made an incredible difference in my life. I don’t know how I would have been able to overcome what I did without their support. I didn’t have resources. They gave me a way to free myself from such a devastating situation, a way to protect myself, protect my kids. Now, I have legal reinforcements. Without them I would have been trying to fight this battle on my own, and it was a losing battle.”