Voices of Justice: ‘My Work to Do’ shepherds difficult, engaging, liberating conversations on race 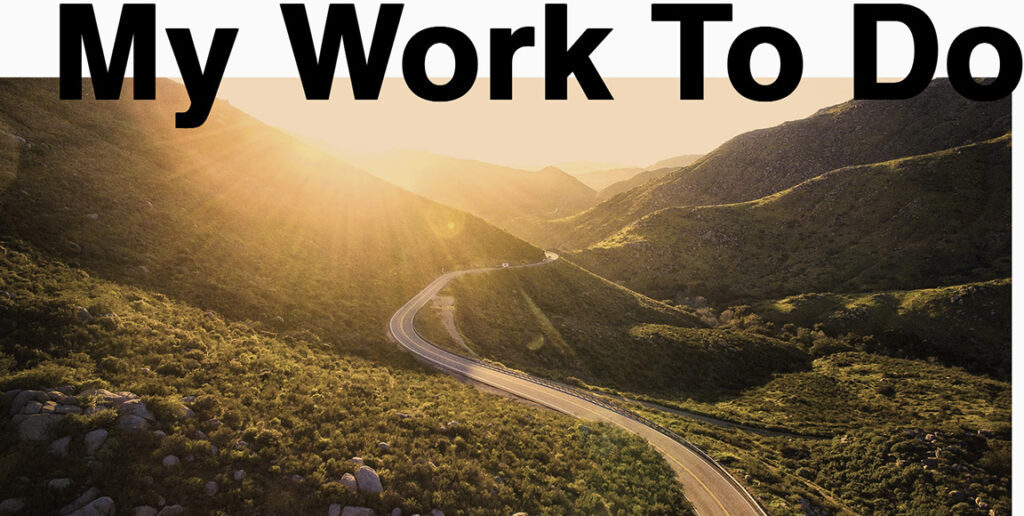 The Madison, Wisconsin, native was 23, serving an Episcopal urban intern year in Los Angeles when she and other interns participated in a group activity led by her mentor, Canon Suzanne Edwards-Acton.

“I remember it like it was yesterday,” Voboril, 31, told The Episcopal News recently. “The activity was to select from a group of black and white photos; of people, of obscure objects, just whatever you felt you could use to describe your experience with race.”

A young African American woman in the group shared a reflection about her daily experiences, Voboril recalled. “She was saying ‘you have no idea what it feels like to be me every day, to wake up in the world and to be marked with trauma.’”

Until that moment, “I thought I got it, about race,” Voboril recalled. “I had friends of color. I had worked at the Boys and Girls Club. I had dated a Black guy. I had all these qualifiers. That was the most profound moment for me, to think about how different her experience is from mine. And it wasn’t just what she said, it was the reaction of the other white people in the group, who got so angry at her for saying it.

“They were so offended. Their response was, ‘that’s not me and how dare you tell us about ourselves. That’s why we’re in this program in the first place.’ We quickly jumped to anger, gaslighting her experience. It took Suzanne following up with all of us to say, this is exactly the problem. She changed the course of my life in that moment. She shared with me in a way, it just woke me up. Ever since that day I have felt like this is the most important work that needs to be done.” 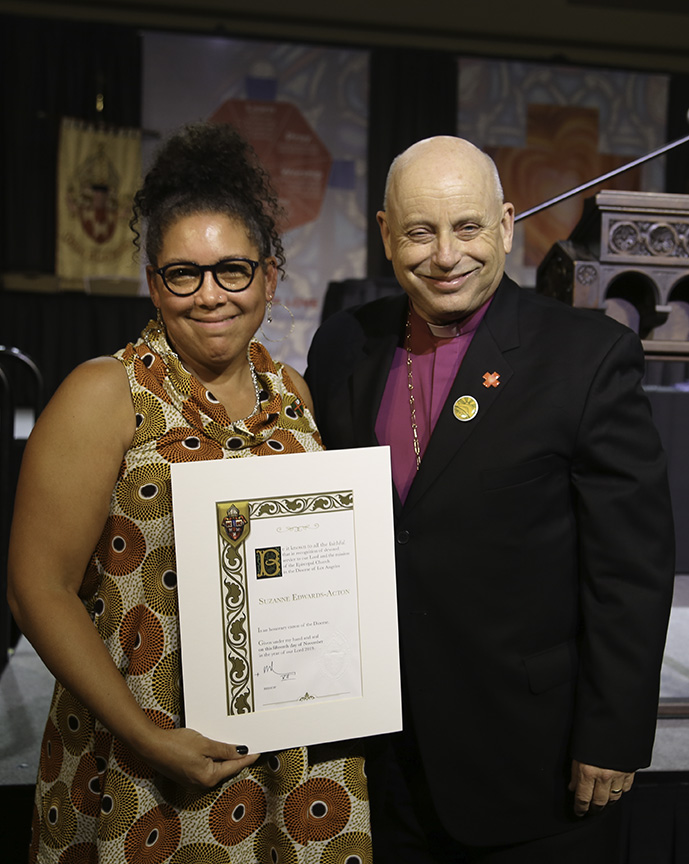 Suzanne Edwards-Acton, founder of My Work to Do, was named an honorary canon of the diocese in 2019 by Bishop John Harvey Taylor. Photo: Janet Kawamoto

Edwards-Acton, who is Black, is still following up on issues of race with “My Work to Do” (MWTD), an online affinity group she created in 2018. Its goal: “to help white people build stamina for discussing racism, systemic injustice, racial healing, reconciliation and justice in their everyday lives.”

Black, Indigenous and people of color allies are welcome to join the sessions also, with a caveat that, “this is a white-centered, and therefore, not always safe space.”

The Rev. Dominique Piper is one of those allies. But when she joined MWTD following the May 25, 2020 death of George Floyd, she was in search of comfort herself. Floyd, an unarmed Black man, died after a Minneapolis police officer knelt for nearly 9 minutes on his neck. The incident sparked months of international protest.

“I just found myself out of words,” said Piper, who is Black. She thought of her husband Chris and their 7-year-old twins, Charles and Edward, “and I wondered, are they going to grow up and see this stuff, too? Is it ever going to end?”

Piper, who was set to be ordained a vocational deacon on Sept. 19, 2020, thought, “People usually turn to those who are ordained for comfort. Honestly, I was like, what am I going to say, because I’m just as distressed and just as tired and just as saddened as everybody else.”

Joining MWTD “was amazing. I loved it, because it gives white people an idea about what they really don’t know, about some of the things people of color have gone through and still go through and are still affected with today.”

The experience was so amazing, she invited Edwards-Acton to lead a session for the congregation she serves, Church of the Blessed Sacrament in Placentia. “It gives me hope,” said Piper, 34, “because the only way things will change is to start with education. And some things you don’t learn in school.”

Since its launch, the curriculum has expanded from one to four weekly segments, including groups focused on “Getting Started,” “Going Deeper,” “Reparations” and an occasional pop-up gathering. The sessions typically last 5 weeks and are funded through grants and donations. MWTD has drawn more than 700 people from across the United States, and from Brazil and Canada, with many participants repeating sessions.

“It’s a unique space,” Edwards-Acton said recently of the 90-minute gatherings, which include reflections on articles, videos, art and other materials. “This is not about Black and Brown people. It is literally learning about whiteness.”

Rather than race being about “the other,” about people of color, it is about whiteness, she said. A beginning assignment for participants “is to just notice whiteness, to watch it everywhere you go.”

She thinks of MWTD “as group spiritual direction. We know for sure that 700 people have had the opportunity at least to see things differently.”

Beth Bojarski, who helps facilitate the program along with Voboril and Edwards-Acton, said her 2012 – 2018 tenure as director of Camp Stevens nudged her in MWTD’s direction.

“For most of my life, prior to my experience at Camp Stevens, I was totally oblivious about race,” she said. “At Camp Stevens, I interacted with more people who were ethnically and racially different than I am, and I started to get the sense that there was a secret or understanding of the world I’d never been told.”

While at Camp Stevens, she invited Edwards-Acton to lead a staff retreat. “That was really eye-opening. That, for me, was the very beginning of identifying what at the time I didn’t realize, but now know, is whiteness.”

MWTD became for her, “a brave space to begin to learn and talk about race and whiteness in a way that isn’t about the other,” Bojarski said. “The first couple of sessions felt terrifying,” she recalled. “The experience for me, of saying every week, my name is Beth and I’m white, was really a paradigm shift.”

MWTD has also been a space to practice listening to conversations about race non-confrontationally, she said. “It’s a space designed so that people aren’t talking or responding to each other … you’re not receiving personal feedback.” 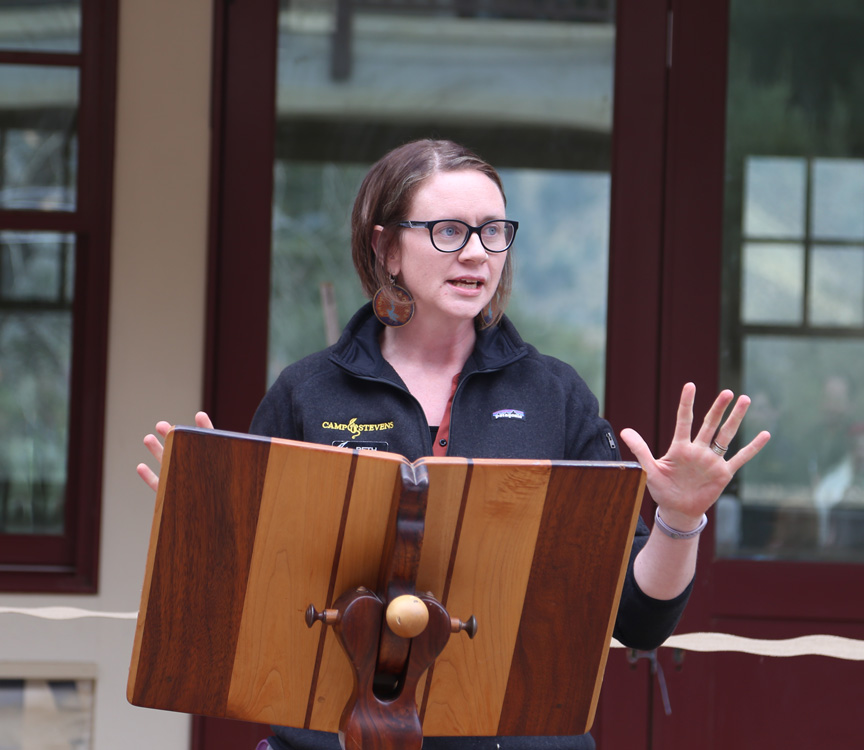 Beth Bojarski, a MWTD facilitator, speaks at an event at Camp Stevens, where she was executive director from 2012 to 2018. Photo: Janet Kawamoto

Bojarski, 42, grew up in rural Central New York and recalls attending school with children of color, but “I don’t remember seeing them as anything but just like me. I whitewashed my whole childhood.”

Participation in MWTD is “a values thing,” she said. “I don’t want my children to wake up one day at 40 and discover the white bubble they had existed in. I don’t want them to have my experience with whiteness.

She added that MTWD “is Kingdom work. ‘Thy will be done on earth as it is in heaven’ is about environmental justice and racial justice and it’s about diversity in both of those things. I find hope in anybody showing up, for any amount of time, because the first step is people showing up. I see hope any time someone is uncomfortable, anytime I am uncomfortable. Because until we push ourselves, until we take some amount of risk, we limit our ability to grow and change. MWTD creates a space for white people to take a little bit of risk.”

Kimberly Cortner, a spiritual director and educator, was so excited after completing two MWTD programs, she created a pilgrimage for racial justice at her church, St. Mark’s in Upland.

MWTD opened her eyes to the reality of white privilege “and actual white supremacy and the systems that are underlying so much of our society that I hadn’t realized. It was very good for me,” she said.

Inspired, she and other church members have taken their new awareness a step further. They are creating a congregational Commission for Equity, Justice and Reconciliation as an expression of the Beloved Community, to help promote awareness of injustice and the need for reconciliation within the church and the larger community.

Similarly, the Rev. Carri Patterson Grindon, rector of St. Mark’s Church in Altadena, said she approached MWTD “with the sense this work would have a direct impact on my leadership and parish.”

After Edwards-Acton led sessions with the St. Mark’s vestry, the group committed to beginning their meetings with a reflection period and conversations about race.

“This is a moment when I and the leadership want to take another step, to go deeper, not just to be welcoming but to really be equitable in what we bring to the table and how we’re leading, and to have our leadership and our liturgy and our outreach more fully reflect our commitment to anti-racism,” Grindon said.

“We’re just beginning a more intentional work, but I do see the stamina for the conversation on the leadership level growing. And I don’t want to speak for the Black members of our vestry, but I seem to observe a greater sense of their being able to speak to their experience.”

Grindon has experienced personal shifts as well. MWTD “has done what it’s supposed to do. Not only is my awareness growing, but also my stamina. I am strongly advocating for people to participate in doing the personal work that this allows, because it will change the way they show up in the rest of their lives, and it matters deeply.”

Voboril, who lives in Madison, Wisconsin, said MWTD has given her the courage to speak up where she once would have remained silent “when I hear things that are not right.” At a friend’s house a few weeks ago, she challenged someone’s contention that there is no such thing as white privilege.

“My old self would have said, I don’t want to cause any problems. Instead I started asking probing questions, about how he came to that conclusion, and trying to get him to think through some of the ways he has benefited from it,” she recalled. “Now, it’s planted in his brain. He obviously had said that many times before and nobody’s challenged him on it.”

Much of the work “is listening and learning from others, hearing the perspectives of men, women, people of all ages, from different parts of the country and their experiences. From the older woman who used to ride a segregated bus, to a person in rural New Hampshire who said they’d never seen a Black person in their life. We learn by people saying here’s what I’m feeling this week, or saw, or read. Sharing those resources, we all benefit.”

She added: “This is not self-improvement work. This is not about me being a good person or feeling better about myself. It is liberation work, lifelong work. We are planting seeds in a garden we might never see. But we’re doing this work so that others can live in dignity and feel liberated and free and not have to live in the chains of this system.”

To learn more about My Work To Do, visit the website here. Current sessions are closed, but more will be scheduled in the new year.