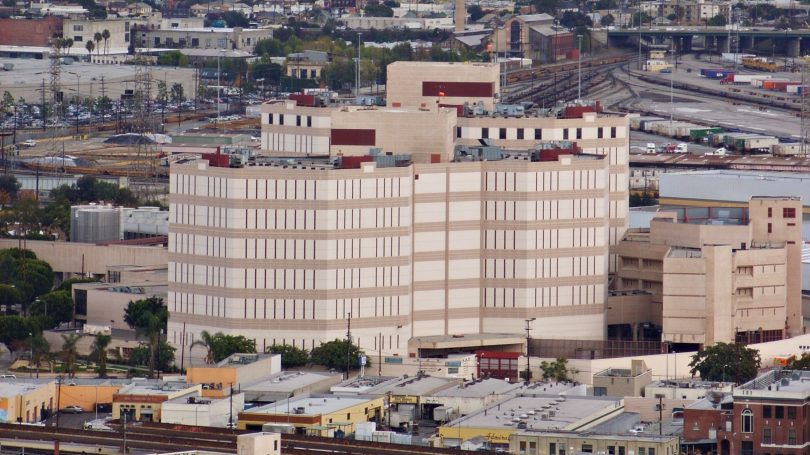 The Twin Towers jail in Los Angeles is the site of Deacon Sam Pillsbury’s chaplain ministry. 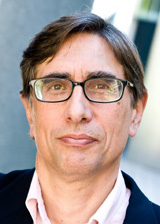 Deacon Sam Pillsbury serves as a chaplain in the Twin Towers jail.

[The Episcopal News] After a pandemic-forced year’s hiatus, Deacon Sam Pillsbury returned to the Los Angeles Twin Towers Correctional Facility in March, heeding a strong call to let those he serves know, “they are not forgotten, that they are still cared for and count as people.”

Currently housing some 2,500 prisoners, the Twin Towers is the world’s largest jail facility and the world’s largest mental health facility. “We are talking about people suffering with very significant depression, bipolar, schizophrenia, and other things,” says Pillsbury, 66, who since 2010 has served there as a volunteer chaplain with Prism, the diocesan restorative justice ministry.

“Almost everyone has a diagnosis and is under mental health supervision. There is a large staff of mental health professionals who supervise their treatment and most of them will tell you that it’s more about maintenance than real treatment. It’s a terrible place for your mental health – everyone acknowledges that.”

Scott Wood, a Loyola Marymount University professor and the founder of the law school’s restorative justice project, recalled joining his colleague for one such visit, during which Pillsbury led worship.

“It’s like you’re looking into a giant fishbowl,” said Wood. “The announcement will be made that there’s going to be Episcopal services in this room. There is an altar and Sam’s facing into the room but only guys who want to attend will come close … and right behind them, guys are walking around, chatting, doing other stuff.

“He does a beautiful job,” Wood said. “Sam really connects with these guys and they’re hungry for that kind of connection.”

Prism co-director Deacon Dennis Gibbs agreed. “Sam is a true deacon in the church,” and was part of a first-ever team allowed to be present while inmates were being booked into the jail, typically “a tender and complex moment.”

“Before that, the sheriff’s department had not allowed chaplains in that area, but they had a change of heart, … and turned to us, and Sam was one of the people I turned to,” Gibbs recalled. “He really lives an authentic diaconal life” including lobbying Sacramento lawmakers for systemic changes, involvement in efforts to create a national Episcopal Prison Ministry Community Network, and serving as a member of the Bishop’s Commission on Gospel Justice and Community Care.

Belonging and the beloved community

Pillsbury’s Dec. 2, 2006 ordination unified his prior experiences as a police and court reporter at the Jacksonville (Florida) Journal and as a student graduating first in USC Law School’s class of 1983. He clerked for federal judge William Byrne Jr., and served as an assistant U.S. Attorney before spending the past 35 years as a Loyola Marymount law professor.

“One of the joys of answering your call is to experience yourself as someone you never thought you could be,” said the recently retired Pillsbury. “I never thought I could be a person serving in the jails. I can be there for people in a way I just didn’t think I could be … the process of discernment and ordination and the establishment of ministry has been this doorway into another set of experiences and another life that has been really wonderful … a way of being out in the world and bringing the message of God’s love to people in a whole lot of different settings in a world that really needs that.”

His Twin Towers experience “has really changed my understanding of the criminal justice system,” Pillsbury added. “I see the way the law really fails and the ways in which it is consistently discounting. If lawyers do not have enough time to spend with clients to get to know them, to build trust, then it’s going to be very difficult for there to be a just outcome.”

Seeking a more just outcome inspired Pillsbury, a prolific writer of essays, articles and even two children’s books, to pen Imagining a Greater Justice: Criminal Violence, Punishment and Relational Justice (Routledge, New York and London, 2019), which garnered high praise from Fr. Greg Boyle, the founder of Homeboy Industries, among others.

Boyle, who in 1988 founded the organization that offers transformational opportunities for the formerly incarcerated, wrote in the book’s foreword that Pillsbury envisions “the justice system we actually could have. It manages to get underneath all the issues we need to explore, with sophistication, keen insight and great heart. He proposes a point of view both larger and more humble, and our country will benefit greatly … if we listen to him.”

For Pillsbury, that concept of relational justice means belonging. “The ultimate aim of justice is not exclusion of certain wrongdoers but ultimately a belonging to the beloved community that Dr. King talked about. Beyond the whole idea of punishment has to be a larger belonging.”

A native New Englander and cradle Episcopalian, Pillsbury graduated with honors from Harvard College in Cambridge, Massachusetts, in 1976, earning a bachelor’s degree in history and literature. After a year of reporting about local governmental and school board meetings for the Valley News in Vermont’s and New Hampshire’s upper river valley, he and Linda Goodman – a clinical social worker to whom he is married and who he met his freshman year in college – “went South looking for work and adventure.”

A fascination with the legal process, born of his journalism experience, drew him west to USC law school where, in addition to graduating first in his class, he was also honored for the best student law review note.

From 1983 to 1984 he clerked for U.S. District Judge William Matthew Byrne, Jr., who at became the youngest person ever appointed to the federal bench, named in 1971 by then-President Richard Nixon. Ironically, Byrne later presided over the infamous Pentagon Papers case that ultimately led to the president’s resignation.

After a two-year stint as an assistant U.S. Attorney, prosecuting mostly money-laundering cases, Pillsbury joined Loyola Law School as a professor, training prospective lawyers in rules of evidence, criminal law and procedures, history and public speaking. He also spent a semester at the Universidad de Chile in Santiago in the spring of 2000 as a visiting professor and some time as a visiting scholar in the State University of New York’s Albany School of Criminal Justice.

Acknowledging a call to vocation led him to the Episcopal Theological School at Claremont, where in 2006 he earned a certificate of diaconal studies and received the dean’s award for service to the community.

In the summer of 2007, Pillsbury developed and taught a public speaking class for juveniles being held for trial in the Barry J. Neidorf Juvenile Hall in Sylmar, California, and he continues to lead spiritual formation classes at the Twin Towers.

Now Pillsbury – who says he bears no close relationship to the baking products mega-company – is recently retired from USC, hoping to return to work on a crime novel, and has resumed jailhouse visits. There “all of the inequities with respect to education and housing and race are played out. The people who are there are the ones that have not found a place or society has not given them a place.”

“Sam’s experience as a federal prosecutor and Criminal Law Professor at Loyola Law School are only a part of the reason he was invited to chair the Assessment and Articulation subcommittee,” she said. “As a deacon in the Episcopal Church who serves as a volunteer chaplain at Twin Towers, Sam is an authentic voice for those on the outside of the corridors of power in our criminal justice system. Most importantly, his deep insights into the need for relational justice and the healing of everyone in our communities from violence of all kinds is a profoundly important part of our work.”

There are big challenges and real opportunities for change, especially using the resources of congregations to “engage in a real Gospel way as the bishop has said, to find in this work something really rooted in the Jesus way,” said Pillsbury. “There are some promising ways of doing that.”

Currently, his diaconal service “pulls together everything I’ve been doing,” he said. “I thought I’d be working with the police, with judges and with victims of crime, but not with the incarcerated. One thing has led to another, the connections are there and the sense that somehow, this is where I am supposed to be. All of the issues I’m concerned with, in terms of justice are very much apparent there.”