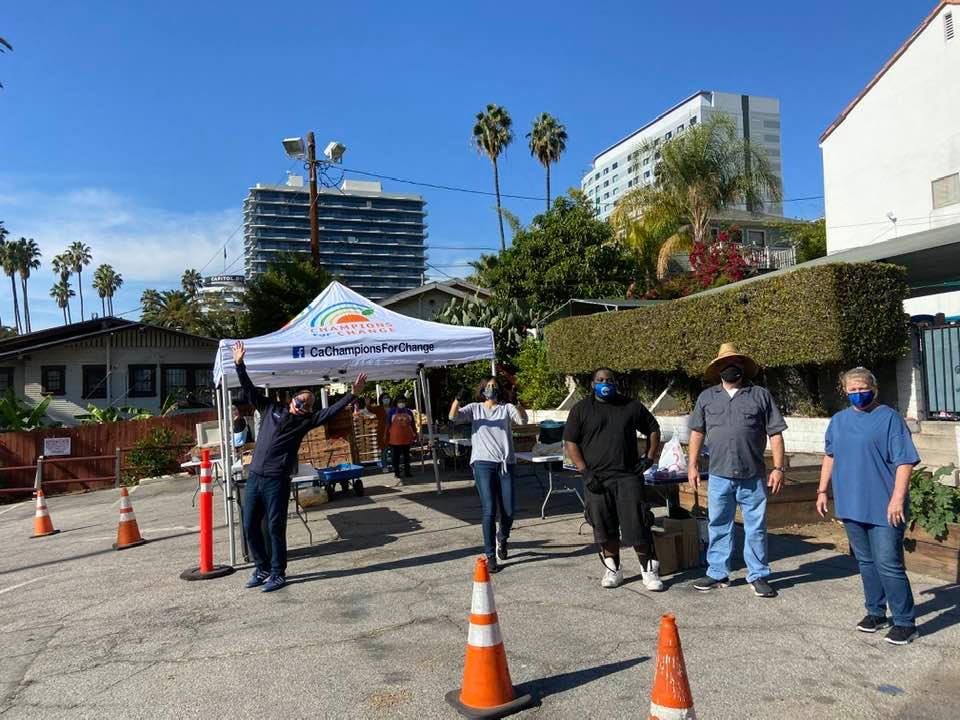 Volunteers at the Seeds of Hope distribution center at St. Stephen’s Episcopal Church, Hollywood, get ready to distribute fresh fruit and vegetables to local residents.

The COVID-19 pandemic has created a seismic spike in existing food insecurity, and a shift in the approach, but not the mission, of Seeds of Hope, the food justice ministry of the Episcopal Diocese of Los Angeles.

“The intent behind Seeds of Hope was to rethink, to repurpose church resources and capacities, to do what we can to address food insecurity and the structural inequities in the system that leave people struggling to have access to or to afford basic nutrition,” says executive director Tim Alderson, who founded the ministry in 2013.

Seeds of Hope has since grown to about 92 urban farms, 75 food pantries and 70 meal programs — just among churches and diocesan institutions. Additionally, it has cultivated a network of nearly 50 local and county partner agencies, increasing its capacity to offer nutrition and education classes, along with distribution of fresh produce.

In 2020, for example, Seeds of Hope staff transported about 26 million servings of fresh fruit and vegetables to Los Angeles county’s food insecure and hungry, more than tripling the previous year’s deliveries. “The dramatic spike was due almost entirely to the COVID-19 pandemic,” Alderson said.

The pandemic has meant a shift in focus largely to food distribution, especially for partners like St. Stephen’s Church in Hollywood, whose congregation and Delaney Wright Fine Arts Preschool have been deeply affected, said the Rev. Canon Jaime Edwards-Acton, rector. 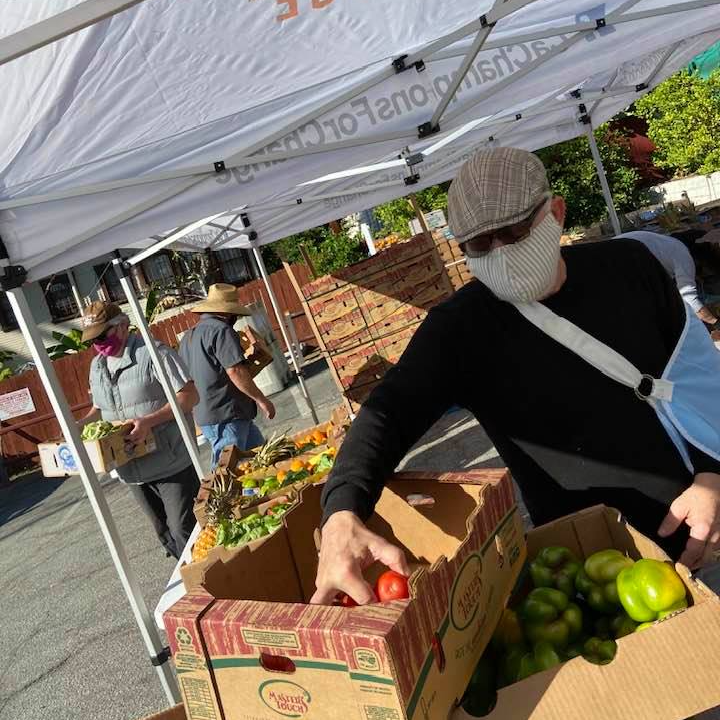 In just a few months, St. Stephen’s transitioned from merely offering storage space for two Seeds of Hope 40-foot refrigerated units, trucks, forklifts and other equipment to serving as a food distribution site for its members, other local churches and the community.

“We’ve had at least 20 people directly affected by COVID,” Edwards-Acton said. “A teacher, a young woman, teaching at the preschool for years, just lost her father and uncle to COVID and is trying to raise money for funeral costs.

“We started passing out grocery bags of food in April,” he added. “One thing led to another and it turned into a giant operation, where we’re handing out between five and six tons of food a week at St. Stephen’s, and at St. Barnabas, also known as ‘St. Be’s,’ in Eagle Rock.”

For the already food insecure and economically vulnerable, weekly fruit and vegetable giveaways valued upwards of $60 can make a huge difference in a family’s monthly budget, diverting savings to pay the rent or health care costs, said Dipa Shah-Patel, director of nutrition and physical activity at the Los Angeles County Department of Public Health. The department has partnered with Seeds of Hope to help expand their storage capacity and space at St. Stephen’s, also known as the Hollywood Food Hub.

Shah-Patel said the Seeds of Hope model — planting gardens, teaching nutrition and education classes, along with food recovery — has “knocked it out of the park” in terms of holistic approaches to creating access to healthy food.

“Not only are they providing nutrition education to their participants, but they also got food from Food Forward, and presented it in such a way that it gave people dignity,” she said. “It wasn’t like a handout. It gave people a choice.” 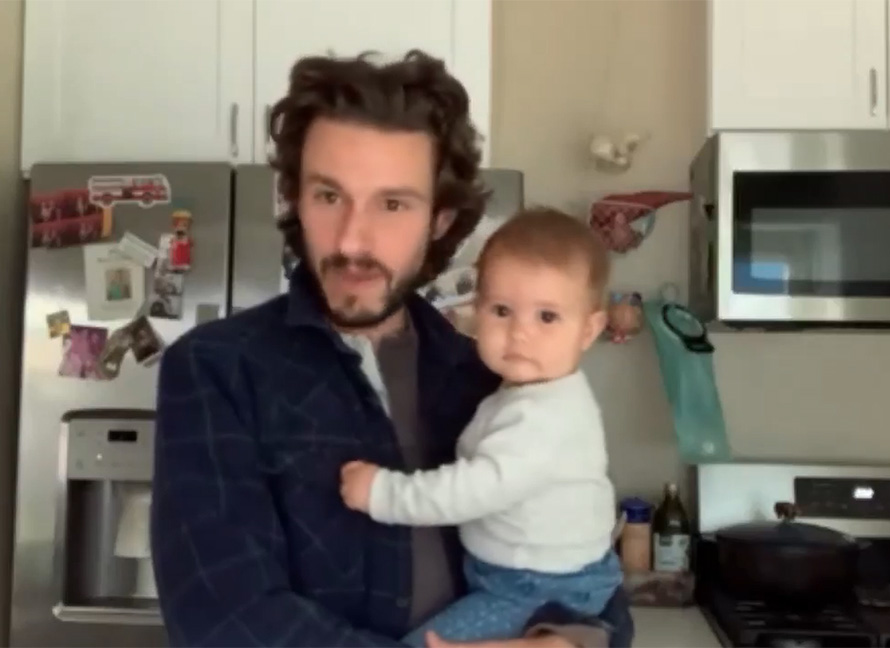 As Seeds of Hope nutrition education coordinator, Steve Trapasso is always interested in healthy cooking choices. COVID forced the temporary halting of in-person cooking and nutrition classes, so on this particular day he is ingredient-shopping in preparation for a video demonstration of how to make kale chips. The videos — inspired by the week’s available produce — are posted to the Seeds of Hope Facebook page.

“In lieu of in-person classes, we are doing every week an easy recipe for a snack or easy breakfast, or whatever, based on what is delivered by our produce delivery section of Seeds of Hope,” Trapasso said.

The classes aim to counteract pop culture misinformation. “Thousands of books are written every year about the newest diet and the newest superfood, and it’s very confusing for people,” he said. “But, when you’re cooking for them and they get to taste something that tastes good and is good for them, they realize that good, healthy food doesn’t have to be granola.

“It is the best thing you can do for them, and so rewarding, and my favorite thing to do.” 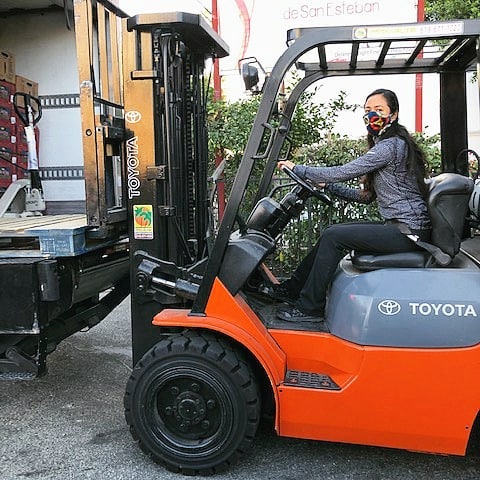 Since COVID’s onset, Erica Nieves, food distribution program coordinator, has spent a lot of time on the road, making pick-ups and deliveries of fresh fruit and produce from Food Forward, another Seeds of Hope partner.

Her days begin as early as 5 a.m., maneuvering a 1,620-foot refrigerated truck to the depot, loading it and starting her deliveries, either to the St. Stephen’s, Hollywood, food hub or to any of the clinics, Los Angeles county parks, public housing, hospitals, nonprofit and religious organizations and other agencies with whom Seeds of Hope partners.

She counts Seeds of Hope among the agency’s “most robust partners” for their dedication to ensuring “that edible produce isn’t ending up in landfills and contributing to greenhouse gas emission, and ensuring people have access to free sources of healthy fruit and vegetables,” she said.

According to Jellum, the rate of food insecurity in southern California more than doubled in just a month’s time, up from 11% in May to about 25% in June 2020, as “lines at food banks and food pantries exploded.”

For Nieves and other Seeds of Hope staff, that explosion translated to moving triple the amount of produce. The challenge, she said, was “how can we get food to the people that need it, and there was a great need, definitely.” 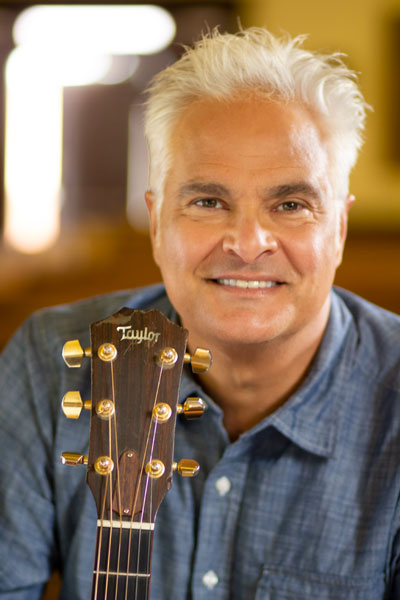 Craig Taubman, founder of the Pico Union Project, credits Seeds of Hope with helping him launch his service agency.

The Pico Union Project is among those drop-off sites. Its founder, Craig Taubman, said the nonprofit agency blossomed after partnering with Seeds of Hope.

“We would do these programs, and nobody would come,” recalled Taubman, who started the agency in 2013. “They didn’t know me; we didn’t speak the same language. Then I met Steve [Trapasso] and he said, ‘hey, we have produce.’”

Since the pandemic, food distribution at the center has leapt to about 2,000 families weekly, Taubman said. “Without Seeds of Hope, it wouldn’t have happened. We’ve grown … and now,” he said of the project’s community, “they would do anything for us. We would do anything for them. We were pretty good alone but a heckuva lot stronger together.”

But post-pandemic, there will be many more opportunities for partnerships. “This isn’t going away when everybody’s vaccinated,” Taubman said. “Food insecurity and food injustice have existed for decades.”

Shah-Patel said more faith-based and community-based organizations must begin to advocate for policy change and to address the root causes of food insecurity “because it is absolutely unacceptable for anybody in the United States to go hungry.

“The work that Seeds of Hope and the Episcopal Diocese of Los Angeles are doing really speak to that, but we need to have a broader coalition and movement to address structural racism, income inequality, and food deserts,” she said.

Alderson agreed. “It is important to make the point that this is a justice issue,” he said. “These issues have always existed. COVID has shined a light on some of the injustices in the system.

“In our country we have people without affordable access to basic nutrition. We have two problems in this country that shouldn’t exist side by side; the food waste problem that contributes to climate change and people who don’t have enough to eat. They shouldn’t exist together. We produce 40% more food than we consume.”

Food insecurity is a symptom, Alderson added. “The problem is, we deal with these problems like they exist on their own. The thing about having to choose between buying food, and paying rent, … if we understand that that’s going on in somebody’s life, perhaps we can intervene in a way to prevent them from becoming homeless.”