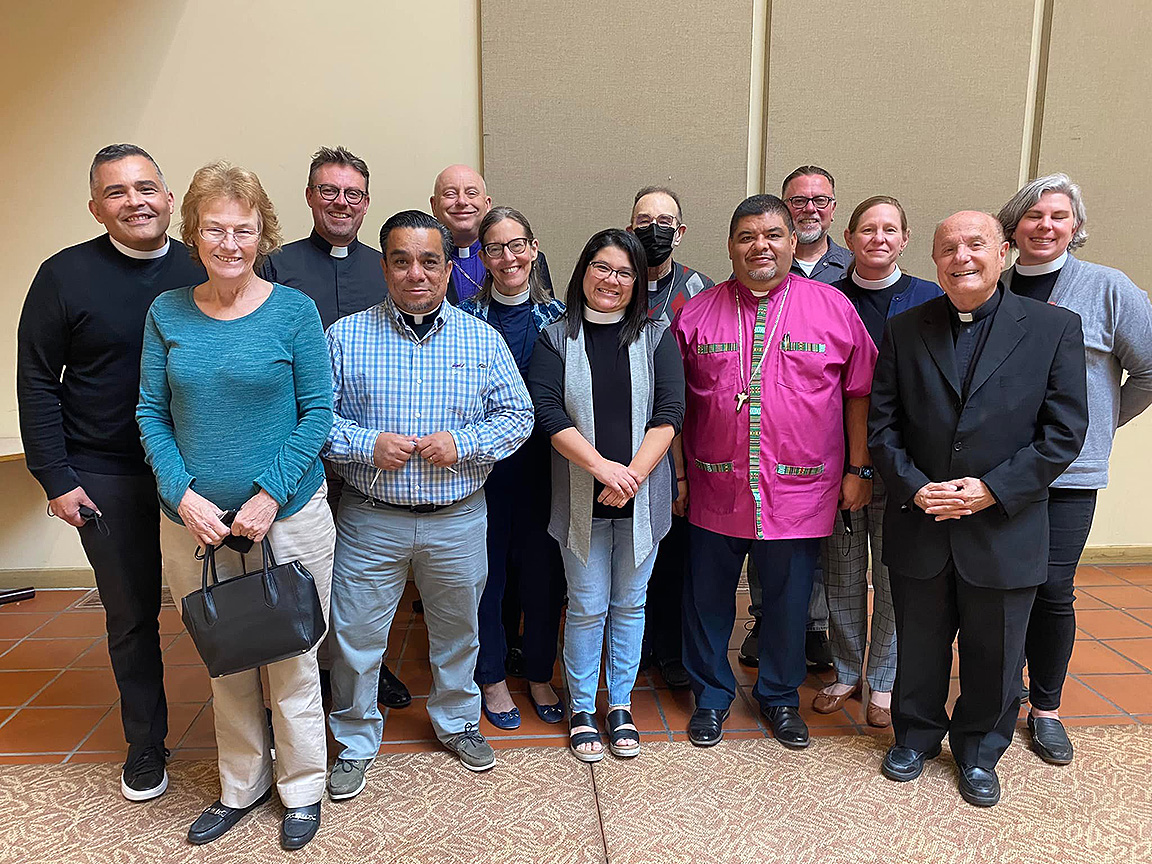 Bishop Romero of Guatemala (fifth from right), along with Bishop John Harvey Taylor and Canon to the Ordinary Melissa McCarthy, meets with Hispanic clergy and those who minister in Spanish-speaking congregations of the Diocese of Los Angeles.

[The Episcopal News] Multicultural ministry, the future of Latino/Latina ministry in the Episcopal Church, and immigration issues are among the topics explored by the Rt. Rev. Silvestre Romero, bishop of the Episcopal Diocese of Guatemala, during a week-long visit to the Diocese of Los Angeles concluding May 15. 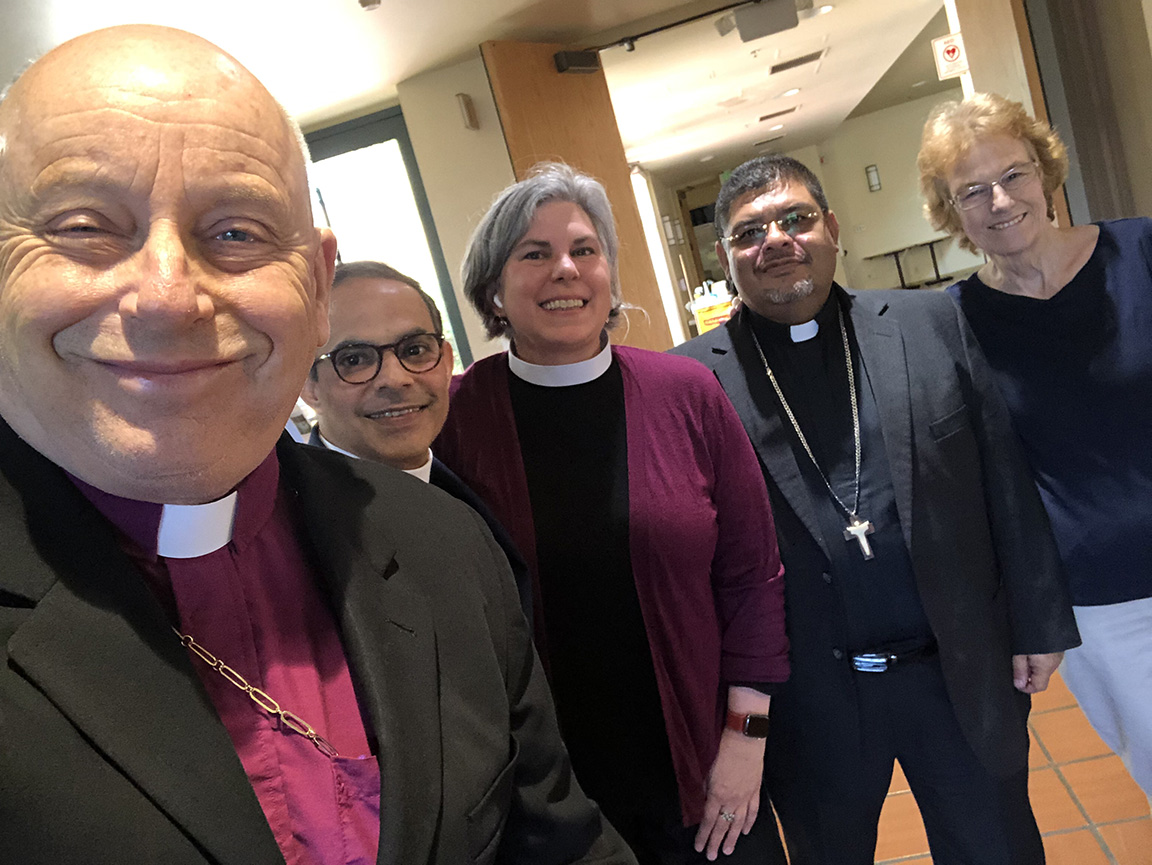 Several members of the border ministries committee of the Diocese of Los Angeles who were Romero’s guests in February during a visit along Central America’s “migrant road” hosted the bishop during his visit. Among them was the Rev. Pat O’Reilly, vicar of St. George’s Church, Hawthorne; and the Rev. Norma Guerra, associate for formation and transitions for the diocese, whose father, Armando Guerra Soria, is retired bishop of the Guatemala diocese, which is part of the Iglesia Anglicana de la Region Central de America.

Romero’s visit, he said, gave him a sense of what might be done with cooperation among U.S. and Central American dioceses. “I’m excited about the possibilities of what we can do with each other and for each other as we are working for the common subject of justice, well-being and the love of God,” Romero told diocesan staff members at a lunch in his honor on May 12.

One of the possibilities, according to O’Reilly, is formation of a transnational church-based network to help provide assistance for migrants. 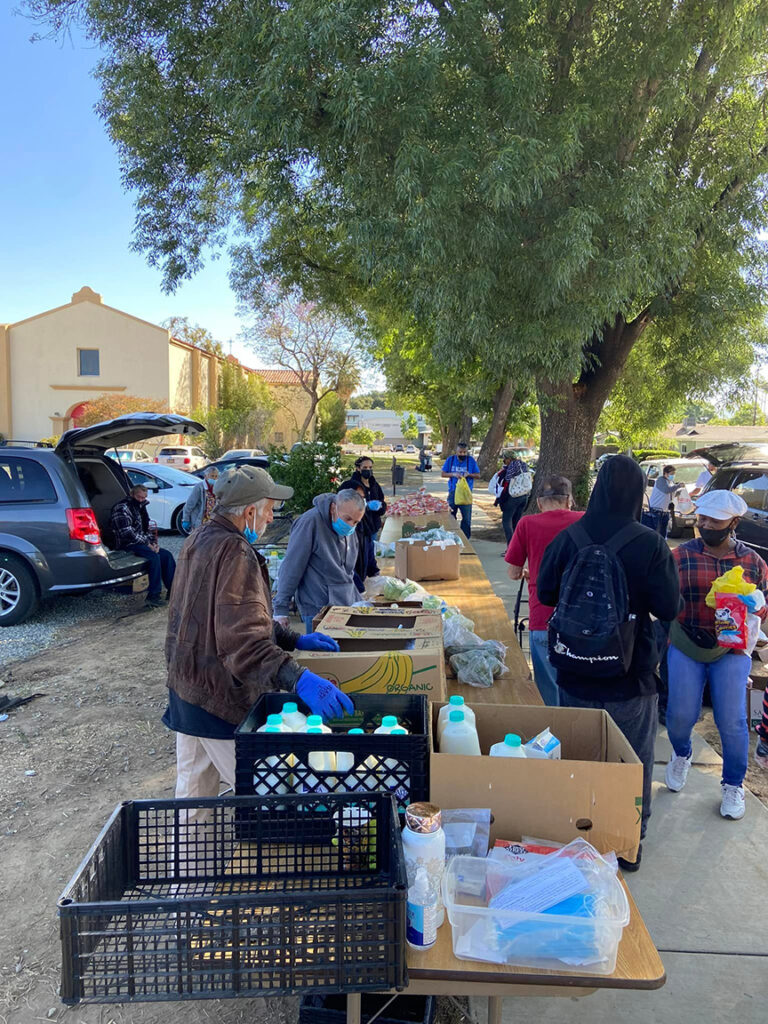 A food distribution program at St. Michael’s Ministry Center in Riverside was one of the ministries Romero visited during his stay in the diocese. Photo: Kelli Grace Kurtz

Romero kept up a busy schedule during his visit, which started with a meeting with Taylor, the diocese’s Refugee Committee and Troy Elder, missioner for migration ministries for the Diocese of San Diego.

O’Reilly took Romero to Riverside to learn about the work being done at Episcopal facilities in the area: St. Michael’s Ministry Center, which has a food sharing program and is in the process of building an affordable housing project; and All Saints’ Church, which also has an extensive food distribution program and helps host a Laundry Love program, among other ministries. He and the Rev. Canon Kelli Grace Church, rector of All Saints, discussed creative approaches to liturgy that reflect the local community.

Romero also paid a visit to St. Stephen’s Church in Hollywood and St. Be’s in Eagle Rock, where he met with the Rev. Canon Jaime Edwards-Acton, founder of Episcopal Enterprises, and assisting priest Carlos Ruvacaba. The bishop met with staff at IRIS, the diocese’s refugee and immigration ministry; talked social justice with Guillermo Torres of CLUE (Clergy and Laity United for Economic Justice); and met with Elder and the California Episcopal Public Policy Network. 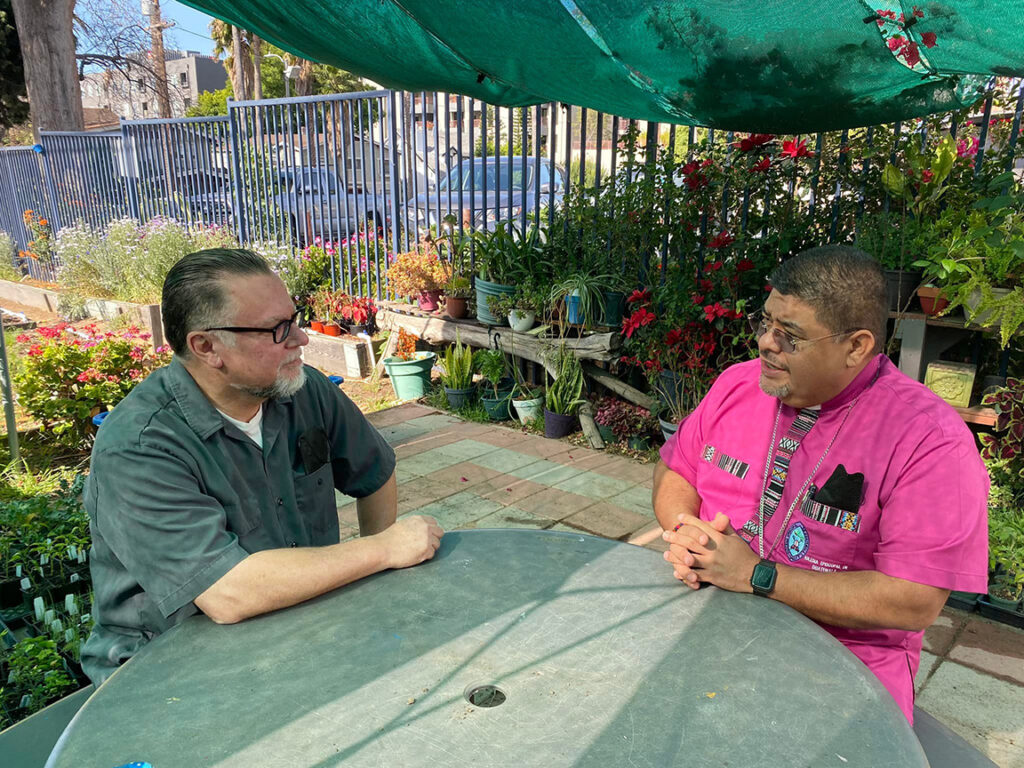 The Very Rev. Tom Carey, rector of Church of the Epiphany and dean of Deanery 4, showed Romero his church, which was a historic center of Chicano activity during the 1960s and ’70s. The bishop also visited CHIRLA (Coalition for Humane Immigrant Rights); Careen, another immigrants’ rights organization; Jovenes, Inc., a ministry to youth founded by the Rev. Richard Estrada of Epiphany; and Homeboys Industries, the gang-intervention program founded by Roman Catholic priest Greg Boyle. Romero met with Latino clergy and with the Rev. Canon Anthony Guillén, Hispanic missioner for The Episcopal Church. He worshiped with the Holy Spirit Fellowship congregation in Atwater Village. He finished his packed itinerary by joining Taylor for a Saturday evening gala in his honor at Iglesia de la Magdalena in Glendale (which, according to Taylor, has members from 12 different Central and South American nations) and by preaching at Church of the Messiah, Santa Ana, on Sunday.

Romero said he anticipates great things from the relationships he is building with people of the Diocese of Los Angeles “I’m looking forward to how this visit will unfold in practical and tangible ways.” 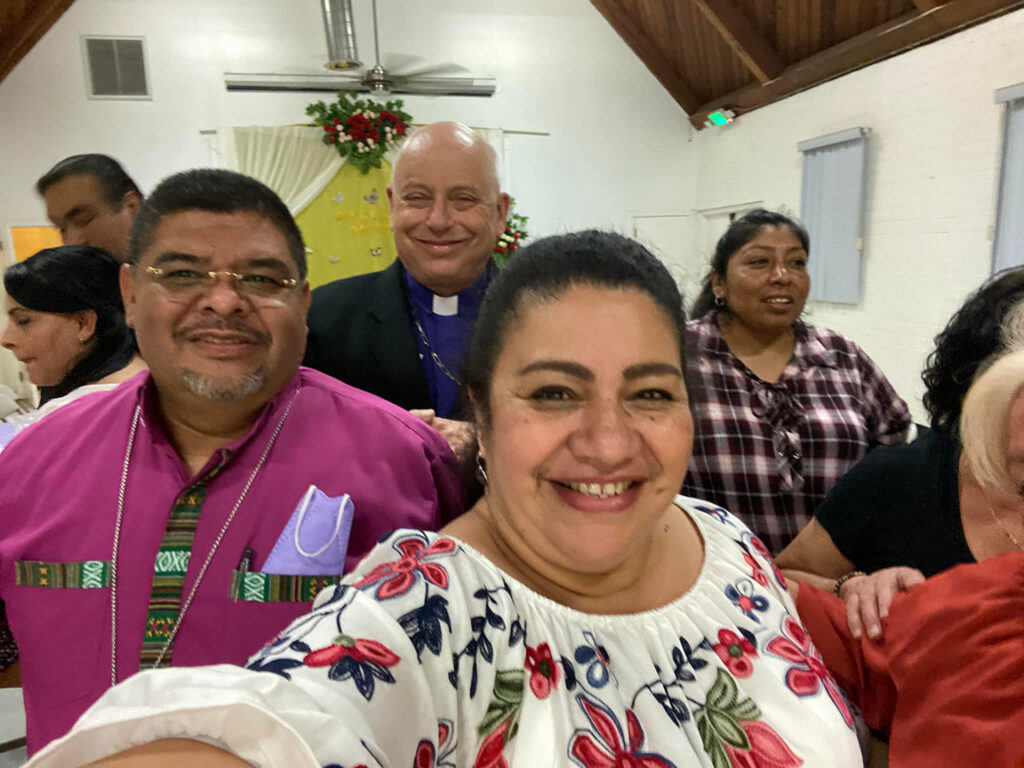 A member of Iglesia del la Magdalene takes a selfie with Bishops Romero and Taylor during a festive dinner in Romero’s honor on May 15. 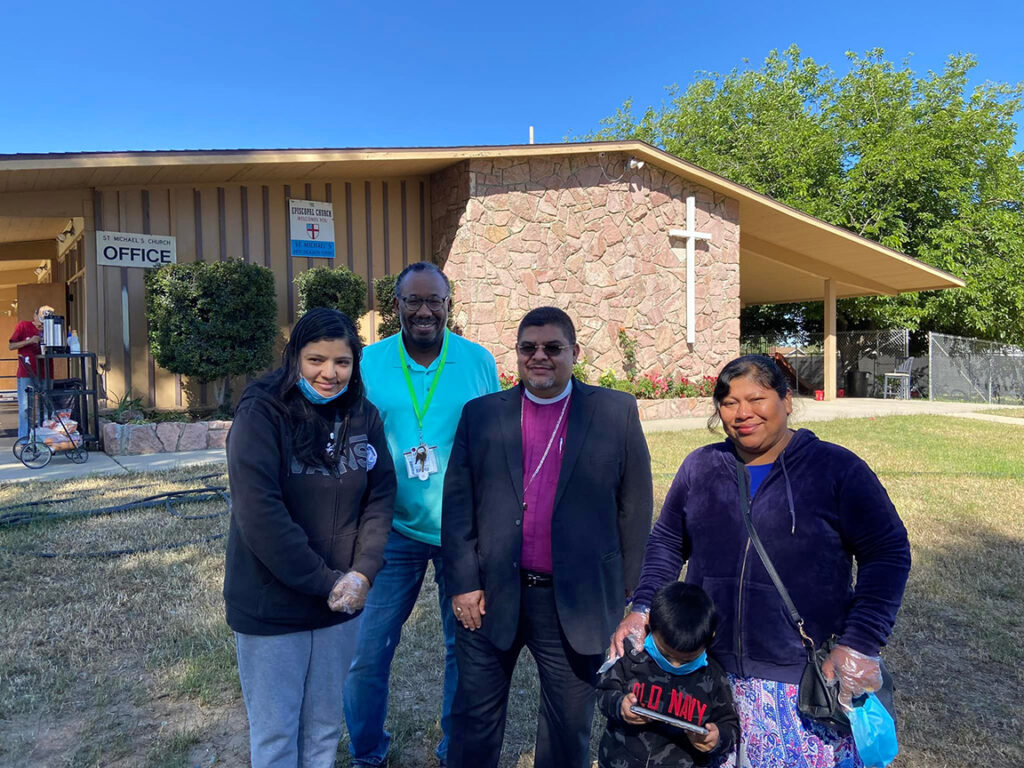 Romero meets with a Guatemalan family during his visit to the Riverside churches. Photo: Kelli Grace Kurtz