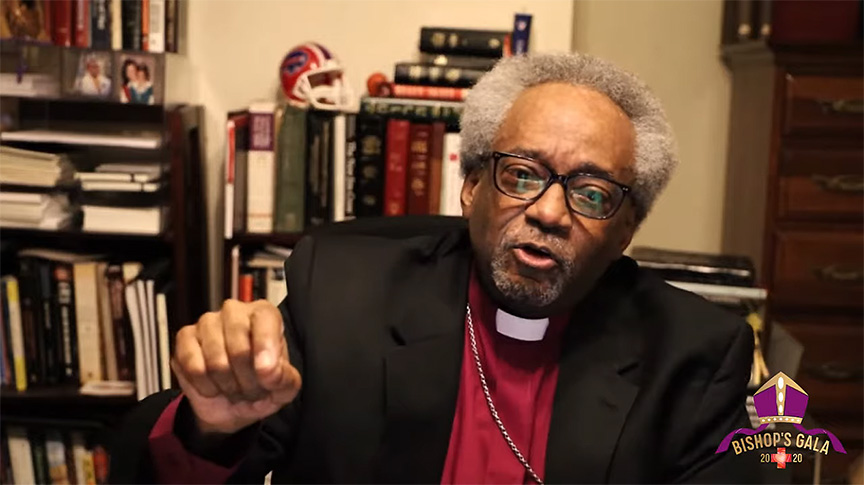 The virtual Bishop’s Gala in the Diocese of Los Angeles on Nov. 7 featured as keynote speaker The Episcopal Church’s Presiding Bishop Michael Curry and a spirited conversation about truth, reconciliation and love, in a benefit fundraiser for diocesan ministries and Bloy House, the Episcopal Theological School in Los Angeles.

The conversation — at times painfully honest, deeply intimate, and profoundly challenging — included Curry’s reflections about his signature Way of Love; advice to U.S. President-elect Joe Biden for healing the nation; the hard work of reconciliation; and the role of deacons in carrying out such work.

After the event, Bishop John Harvey Taylor extended thanks to the presiding bishop and all who attended and contributed. “During the months of transition and transformation ahead,” Taylor said, “we’ll come back again and again to drink from the well of Bishop Curry’s inspiring words and wisdom.” Taylor said that the gala netted more than $100,000. 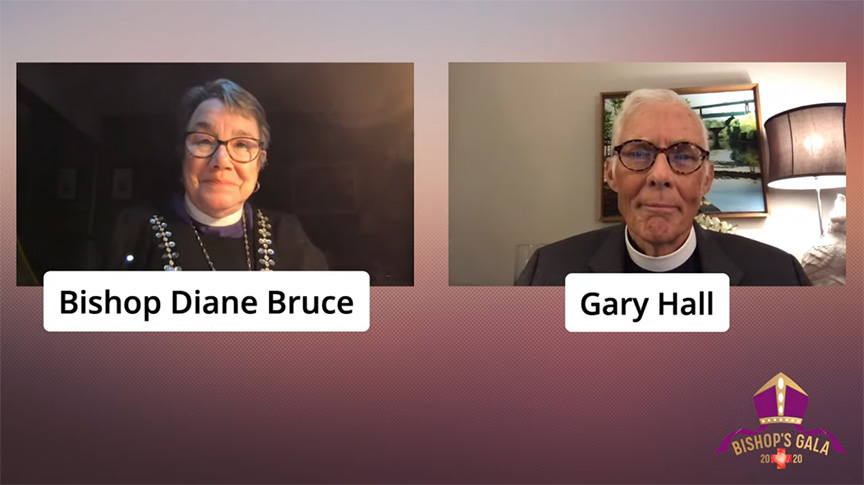 The Very Rev. Canon Gary Hall, interim dean, told several thousand Facebook and You Tube viewers that Bloy House began in 1958 in a house in Los Angeles, moved to the Inland Empire and was located for decades at the Claremont School of Theology (CST). The school continues to adapt to changing times at its present location at the Southwest California Synod headquarters of the Evangelical Lutheran Church in America, in Glendale.

With an eye to the future, the seminary is reimagining itself for the present moment, positioning to engage the wider community, and setting ambitious goals. Included
among those goals, Hall said, is participation in the diocesan capital campaign, which aims to raise $65 million over three years.

“This diocese — perhaps uniquely in the nation — is home to both great cultural diversity and a range of innovative ministries creatively meeting the current context and moment in surprising and inspiring ways,” Hall said. That combination creates opportunities for education, not only for future clergy, but continued immersion for existing clergy, and leadership opportunities for the laity.

Bloy House is also seeking new partnerships. The seminary continues its affiliation with CST, but the Claremont school’s recent move to Salem, Oregon, “means we no longer have in-person access to their theological faculty,” Hall said. Another goal is to reduce or eliminate tuition, he said, “but we can only do that with the generous support of church folk like yourselves, who value theological education for ordained and lay church leaders and who seek to become more deeply immersed in the Scripture, tradition and reason that ground our faith.” 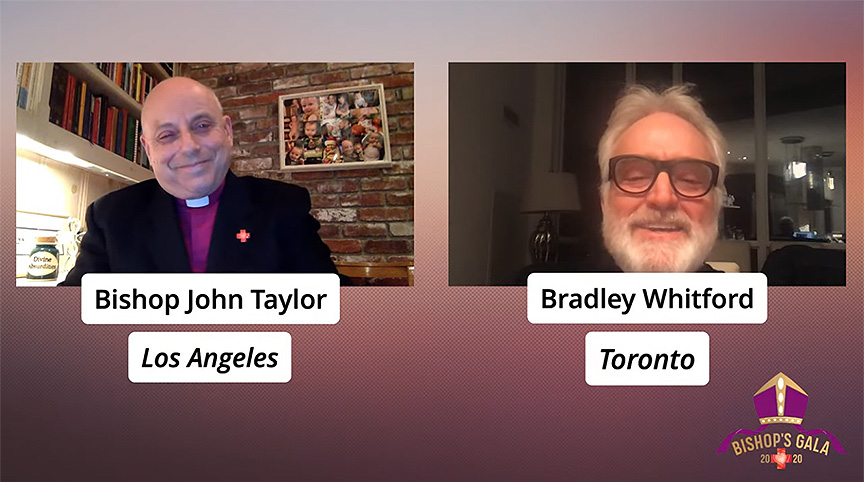 “About 20 years ago, I was sitting in the pews, attending All Saints Church when the great George Regas said in one of his sermons that politics is the way we create our moral vision,” he said. “It was a phrase that stopped me in my tracks and one that has guided my life as an activist ever since … it sets the infinite task before us.”

Similarly, Curry’s Way of Love calls us to action, said Whitford, also a writer and producer, who popularized the roles of White House Deputy Chief of Staff Josh Lyman in the NBC political drama The West Wing and of Commander Joseph Lawrence, in The Handmaid’s Tale. He joined the gathering from Toronto, Canada, where the acclaimed dystopian, post-Second U.S. Civil War television series is filmed.

Setting politics as a moral vision “grounds us in purpose. It cuts through the vagaries of political noise and crosstalk and demands we articulate our values and, most importantly, it calls us to action,” said Whitford, a vocal opponent of President Donald Trump and board member of Let America Vote, an anti-voter suppression organization. In 2019, he co-hosted a fundraiser for Democratic presidential candidate Pete Buttigieg and participated in a series of surprise virtual appearances in support of Joe Biden’s 2020 presidential campaign.

Whitford and others noted the historic nature of the day, when Biden was named president-elect and California Senator Kamala Harris became the first woman, and the first Black and Indian American to be named vice president-elect.

“I am so honored to be here, especially on this day, especially to introduce this wonderful man,” he said. “You can feel the presiding bishop pleading with us to liberate the life and the words of Jesus Christ from the repetitions of the dusty bible to vibrant living action in this world, right now. Bishop Curry understands we need to take some of the holy out of the church and get it out on the streets where it belongs.”

‘Way of Love’—stand and kneel, not ‘cheap grace’

The way of love is not “cheap grace or never having to say you’re sorry,” but rather the willingness both to take a stand with and yet kneel in humility before those with whom we disagree, Curry said, speaking from his home in North Carolina.

But it is not easy, Curry said.

Ultimately, Jesus was executed, and the New Testament rarely speaks of reconciliation apart from the sacrifice of the cross, he said. Yet reconciliation is the Christian call, and includes also repentance, redemption and repair.

He shared a personal reflection, of learning to envision as innocent children those with whom he disagreed during his 15-year tenure as bishop of North Carolina.

He learned to imagine them, “not at the surface where the anger was being experienced. But, to look as deeply as I could go and look for the image of God, (of) the child of God that is there. And, … to kneel before that image, to be humble before the image of God that is in them … and, at the same time, to stand up for the conviction that I believed and trusted was the right thing to do.

“It’s hard work, and we don’t get it all the time,” he said. ‘It is struggling to learn by God’s grace how to both kneel and stand at the same time, and the more of us that do that … with our integrity, we create space for both of us to inhabit.”

This standing and kneeling is a thread throughout the lives of nonviolence resistance advocates like Mahatma Gandhi, Martin Luther King and Fannie Lou Hamer, he said. It is the work of reconciliation and also involves “repairing the breach and then learning from the mistakes, the wrongs, the sins of the past and learning from that and then turning to right a new future.” 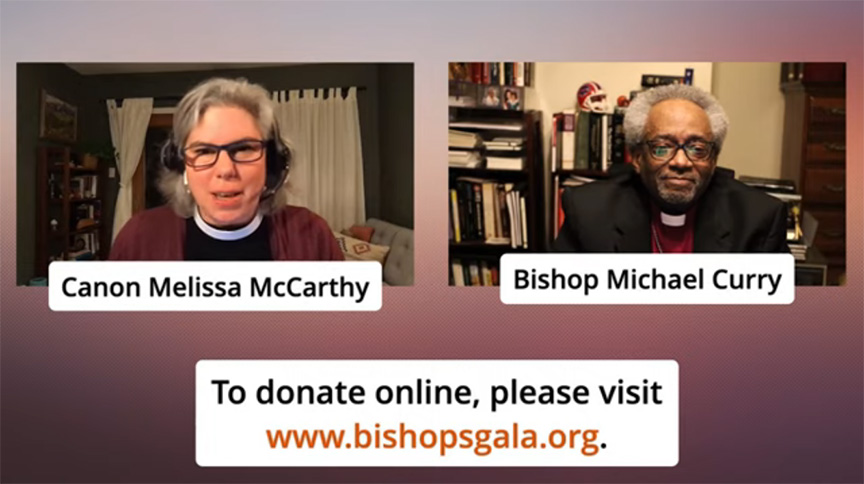 Canon to the Ordinary Melissa McCarthy moderates a question-and-answer session with Bishop Curry after his address to the Bishop’s Gala. Photo: Screenshot

During a question and answer session, Curry said his unsolicited advice for President-elect Joe Biden to help heal the nation includes helping “us face complex truths about ourselves and our behavior,” such as separating children at the border, the treatment of indigenous people, about law enforcement and the criminal justice system.

“He’s got to find ways to tell the truth without pointing fingers because that’s an arrogant posture, to tell the truth of how we have failed and to point ways of how people can come together across differences, from different perspectives, and let’s work our problems out.”

Ultimately, “We all need Jesus,” he said. “We’ve all got to fall at the foot of the cross. And we can, that’s the thing. We are not victims of fate unless we stop being people of faith.”

He cited the third bishop of North Carolina, the Rt. Rev. Thomas Atkinson (1853-1881), a slave owner who, post-Civil War, engaged in reconciliation work by planting churches in former slave communities, and who was one of the first Southern bishops to return to the House of Bishops after the war. Curry said: “It may well be an example for us in our time, when a divided nation must find its way again, when the work of sharing the love of God. The work of trying to repair and do what is right and just, the work of reconciling our divisions becomes our work.”

The American vision of the beloved community is bound up in the nation’s motto: “E Pluribus Unum,” he said. “From many diverse peoples, one nation, that is the motto of the USA,” Curry said. “One nation under God, indivisible with liberty and justice, not for some, but for all.”

“If you want to follow Jesus, you must be servant of all and that reminder is a reminder to be a different kind of church, a Jesus Movement church and not just a church that cares only about itself.”

Drawing inspiration: ‘God is still on the throne’

In response to a question, Curry said his deepest inspiration arises from memories of his maternal grandmother, whose deep faith sustained her through incredible hardship, and who was fond of saying “God is still on the throne.”

The daughter of sharecroppers who married a railroad porter, she managed to move her children “beyond where she had gone” educationally, he said. “Her oldest son went on to teach economics in one of our historically black colleges. My mother was a mathematician and my other uncle was in law enforcement before he retired.”

She also buried three of her five children, including Curry’s mother Dorothy, who suffered a cerebral hemorrhage when he was a middle school student.

“Somehow, that little woman, who did domestic work to get her children through college, … turned around and helped rear two children, my sister and me, after her own daughter died. That woman got strength from a source that was beyond this world, that this world did not give, and did not control and I said, whatever Grandma’s got, that’s what I want.”

Donations may be made here.