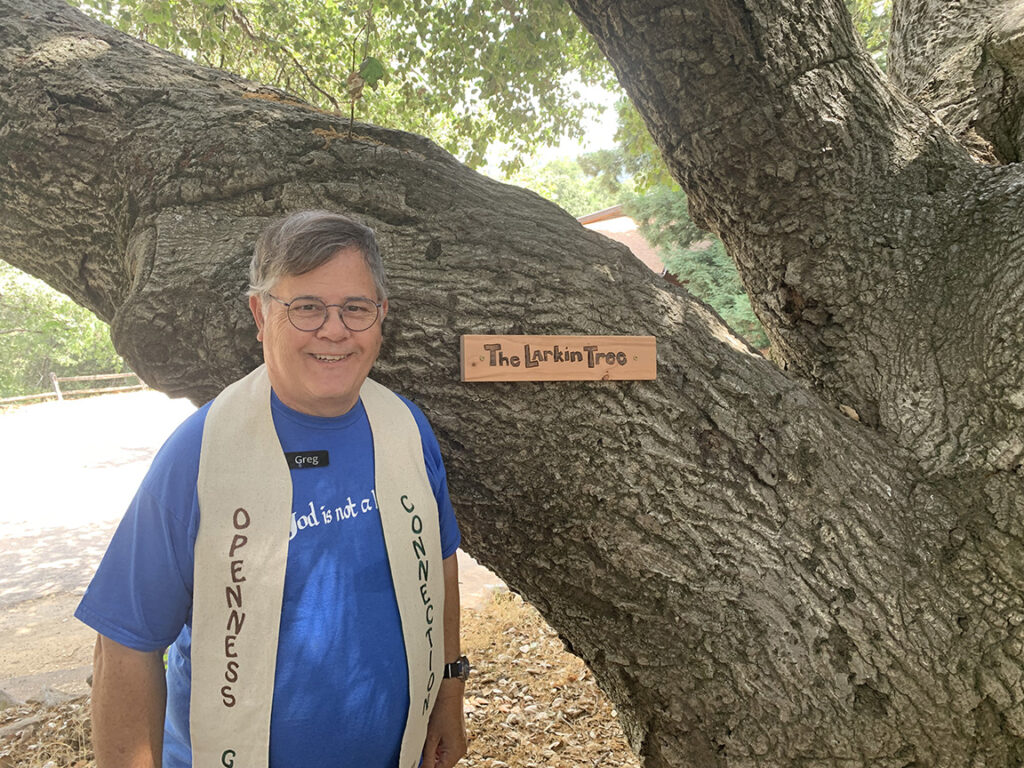 At Camp Stevens, longtime chaplain, board member and board president Greg Larkin poses next to the venerable oak tree recently dedicated in his honor. Photo: Hannah Wilder

During a worship service on the final day of this year’s counselor training session Camp Stevens dedicated a venerable oak tree at the facility’s center to the Rev. Canon Greg Larkin in honor of his long involvement with the Diocese of Los Angeles’ camping ministry and specifically his 31-year commitment to training counselors.

“Greg had the seed of Camp Stevens planted in him and has led counselor training for decades,” said the Rev. Canon Melissa McCarthy, canon to the ordinary, during the service, which was held under the oak tree located next to the main staircase between the dining hall and the Blum Lodge. Larkin was a chaplain at sessions during which McCarthy as well as current executive director Kathy Wilder first trained as camp counselors.

At the end of the gathering, Wilder unveiled a sign on the oak identifying it as “The Larkin Tree.”

“It’s an honor to have this tree named for me,” said Larkin, who is rector of St. Columba’s Church in Camarillo. “All the seeds that have been planted in that 30-year span have been too many to count and I get to see the results every time I come to camp and see someone I know.”

“It’s cool to have buildings dedicated to you but a living tree that’s been here for hundreds of years is a great testament to the Larkin legacy at Camp Stevens,” said McCarthy, who also serves on the camp’s board.

Larkin has a lifelong history with the Julian, California, camp. His parents, the Rev. Robert Larkin, who had attended the first Episcopal camping session with Bishop Bertram Stevens in 1927, and his mother, Catherine, met there in 1944. The elder Larkin was so committed to the camp experience that when he came home on leave from his service in World War II he used his entire two-week break to lead campfire gatherings at Camp Stevens. His son attended sessions there throughout his childhood, later serving as a counselor.

In addition to counselor training, Larkin has been a chaplain at a regular camp session each year. He also has served many terms on the Camp Stevens board, and has been the board president twice, most recently during the difficult pandemic year of 2020.

For more about Camp Stevens and its ministry, visit its website here.

— Reported by the Rev. Hannah Wilder.