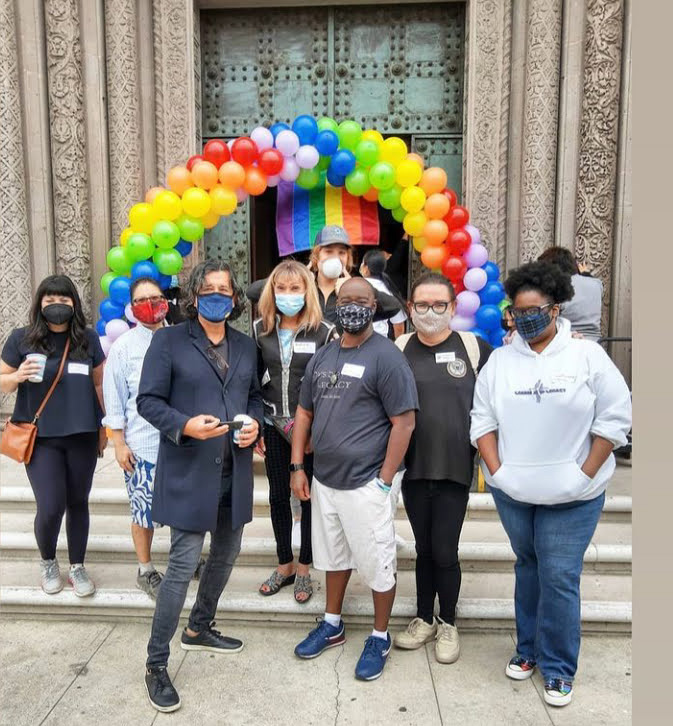 Welcome, care and concern for the safety, health and well-being of LGBTQ+, transgender and nonbinary communities felt palpable at a Saturday, April 24 vaccination event hosted by St. John’s Cathedral in Los Angeles.

“When I arrived there, the first thing I saw—you couldn’t miss the beautiful flags,” said James Wen, 51, a transgender man and Cathedral parishioner. “There was the traditional rainbow flag and the progressive pride flag, which has the traditional transgender flag colors blue, pink and white and includes black and brown stripes to represent people of color. The progressive pride flag was flown along with the Episcopal Church flag,”

The event was held in partnership with the Kedren Community Health Center, a historically African American center serving south Los Angeles for 55 years, which has made national headlines for its relentless efforts to reach underserved communities.

“We continue to meet people where they’re at,” Dr. Jerry Abraham, a St. John’s parishioner who heads the Kedren vaccination program, told The Episcopal News recently. “This is similar to our mantra in The Episcopal Church; ‘whoever you are, wherever you are, you are welcome to the church, to the Lord’s Table.’ Our vaccine is your vaccine.”

Roughly 100 people were vaccinated on Saturday, according to Cathedral co-deans, the Very Rev. Canons Dan Ade and Mark Kowalewski.

Ade told The News the event was just the beginning of a greater outreach effort to transgender and nonbinary communities. “We would like to see the Cathedral as a pulpit to, not only reach out to that community, but to be a voice to come alongside that community who have their civil rights under attack.

“St. John’s is a house of prayer for all people, especially people whom part of the culture has discerned as disposable.”

Abraham said some transgender people were hesitant to receive vaccinations because of uncertainty about the possible effect on hormone therapy. Other barriers included mismatched identification, such as driver’s licenses that might not reflect current gender presentations. Even the possibility of calling someone by a name they no longer identify with, a phenomenon known as dead-naming, has been a barrier, he said.

Additionally, transgender individuals may be reluctant to take public transportation, for fear of being targeted or physically attacked. Physical violence against transgender people increased in 2020, according to the National Center for Transgender Equality (NCTE). The advocacy group reported that, by October 2020 at least 28 transgender people were killed or had died under suspicious circumstances, compared to 26 such deaths in all of the previous year.

“The epidemic of violence is particularly pronounced for Black and Latina trans women,” according to the report.

Politically this year is on track to become the worst year for state legislative attacks against LGBTQ people in history, according to an April 25 NBC News report. Hundreds of legislative efforts are underway across the country to “attempt to erase transgender people and attempt to make LGBTQ people second-class citizens,” the article quoted Alphonso David, president of the Human Rights Campaign as saying during an April 22 news conference. 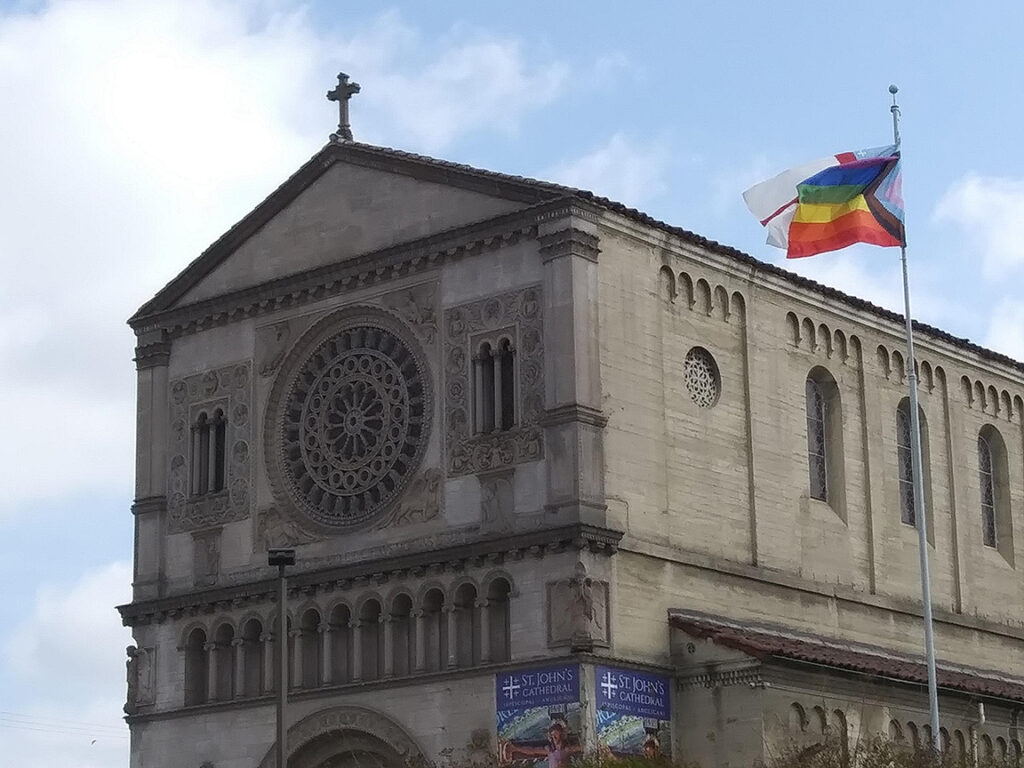 With community partners, cathedral welcomes all to vaccination event

Partnerships with ride share services were offered to try to address transportation and mobility challenges for those wanting to attend the vaccination event. The effort led to a discussion about the possibility of creating retrofitted community-led mobile units to try to address the challenges, Wen said.

Mark Pampanin of Los Angeles’s Civil + Human Rights and Equity Department, also a partner in Saturday’s event, said he and other volunteers visited local businesses and engaged cathedral neighbors in an effort to spread the welcome.

“We wanted to make everyone feel like this was an inclusive and positive thing to do – not something they feel forced to do,” he said. “It was important to all of us to lead with inclusion and empathy. We at L.A. Civil Rights always love talking with people across our city, and it was a wonderful experience to engage with others on the important issue of our health.”

They discovered “that a lot of retail, salon and fast-food workers had not yet been vaccinated,” and managed to persuade some to join the event.

Wen said he was glad the cathedral – and Bishop Diocesan John Harvey Taylor – had taken the initiative to approach and express concern for the transgender and nonbinary communities.

Taylor’s sermon during an April 11 diocesan-wide service both promoted the cathedral vaccination event and expressed vulnerability that, “even for him being a bishop, it was difficult to transition the language,” Wen said.

Taylor described the potential of language to exclude people. During his 13-year tenure as vicar and headmaster of St. John’s Church and School in Rancho Santa Margarita, he frequently addressed students as “boys and girls.”

But “these days, when I visit a school, I try to remember to say instead, ‘hello kids,’” Taylor said. “I don’t want to understate how difficult change for me has been in these matters of language. It’s a process for almost all of us. But, what’s worse? Me, missing saying what I love, or a child who is nonbinary feeling invisible or excluded?”

Wen said Taylor’s vulnerability and open support for transgender and nonbinary people felt like both welcome and the “gateway to inclusion. Without the welcome, we can’t get to inclusion,” he said. 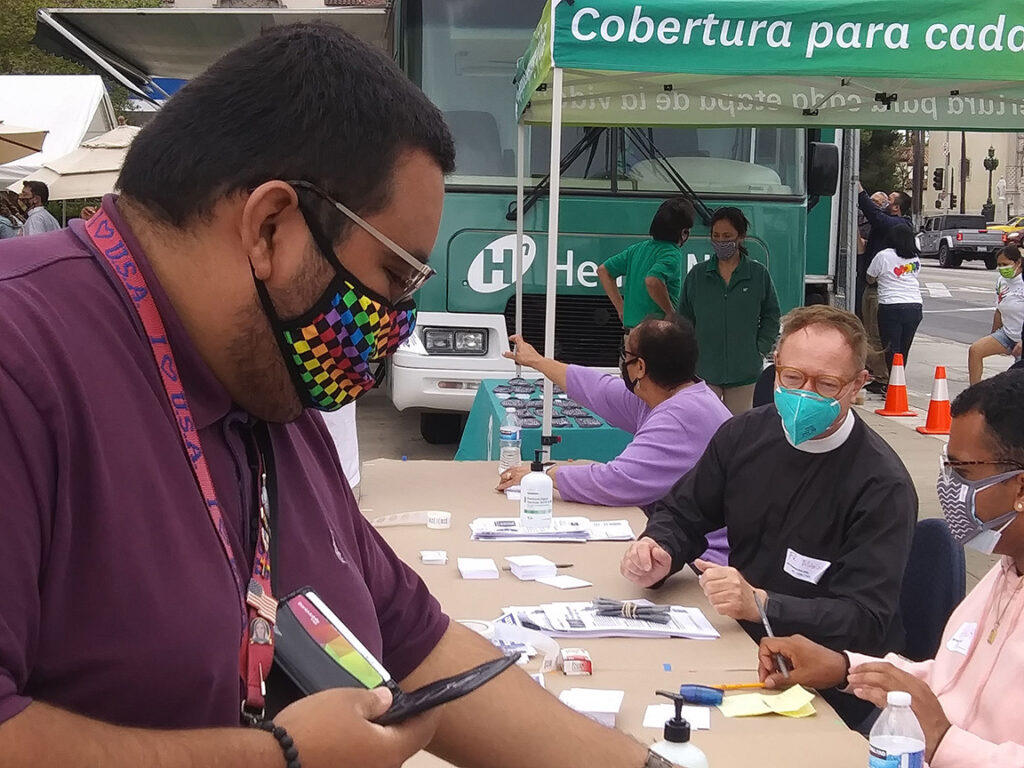 Trans community members face multi-layered and complicated challenges, Wen observed – from finding gender-neutral bathrooms to legal forms that don’t allow appropriate gender identification, to physical violence and an ill-informed, uneducated public and medical professionals, as well as the inaccessibility to mental health care, long waiting lists for gender clinics, costs of surgery and their very existence being debated by others, he said.

Churches have not always represented safe or welcoming places for the transgender community. In some instances, they have felt traumatizing, something the cathedral considered when planning the event, Wen said.

At St. John’s, balloon arches in Pride- and transgender-identified colors beckoned to participants, while an outdoor tented area outside was available for those uncomfortable going into the church. Participants were fed tamales and nonmeat alternatives and also received to-go snack bags.

The event’s name badges began with: “My pronouns are …” while registration forms included “preferred name” and expanded gender and sexual orientation sections. Signage for gender neutral bathrooms were used, and language interpreters were available.

“Those things are important to our community as an opening to ‘Welcome,’” Wen said. “The last thing we want is a person, a technician, calling someone by the name they no longer go by. The greater community probably doesn’t realize how traumatized the LGBT community might be by that.”

He added: “I looked at it as the community’s first look at what a welcoming space at a church could be. I’d like to believe that between the advocacy of the church and community we have also helped the immigrant community and those that are unhoused who may have lost their identification in that process.” 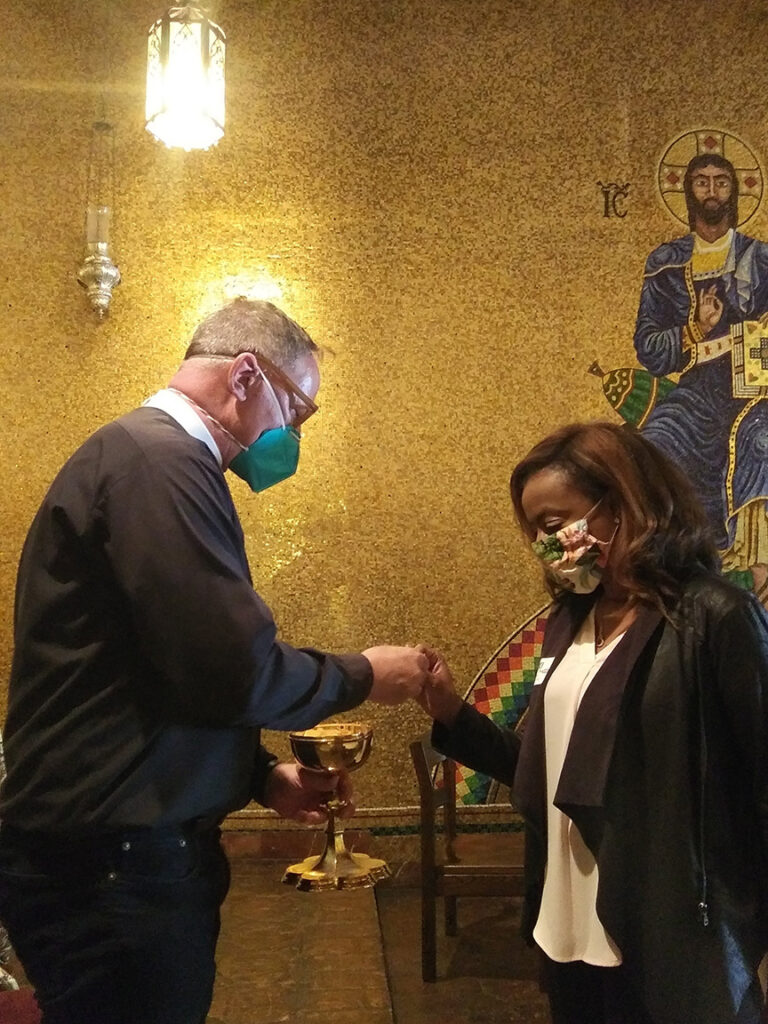 “The energy was electric on that campus,” according to Capri Maddox, executive director and general manager of L.A.’s Civil + Human Rights and Equity Department.

The city agency donated masks, water and food, and brought about a dozen volunteers, including members of the city’s Human Relations Commission, Civil Rights Commission, Commission on the Status of Women and Transgender Advisory Council.

A video of the event is here.

“It was light and festive and fun and welcoming and encouraging and supportive and still prayerful. I even received a prayer and communion while I was there,” Maddox said.

Although the event did not include or advocate worship for participants, Wen recalled a special “Spirit” moment when he invited Maddox to receive a blessing and communion from Kowalewski.

Maddox said she grew up Catholic but now attends First AME Church in L.A. and “I felt right at home. I knew that it was a day of love, of helping, belonging and restoring for Los Angeles.

“I went to St. John’s to serve and I left with a blessing and that’s what happens at a lot at households of faith,” she said. “I’m just glad they’re there for a pillar of the community to serve for such a time as this.

A second event for the second round of doses is tentatively planned for May 22.

“Where there’s an inequity related to COVID the city promises to show up and we will do all we can to make sure that underrepresented populations have this lifesaving option, lifesaving resource,” she said.