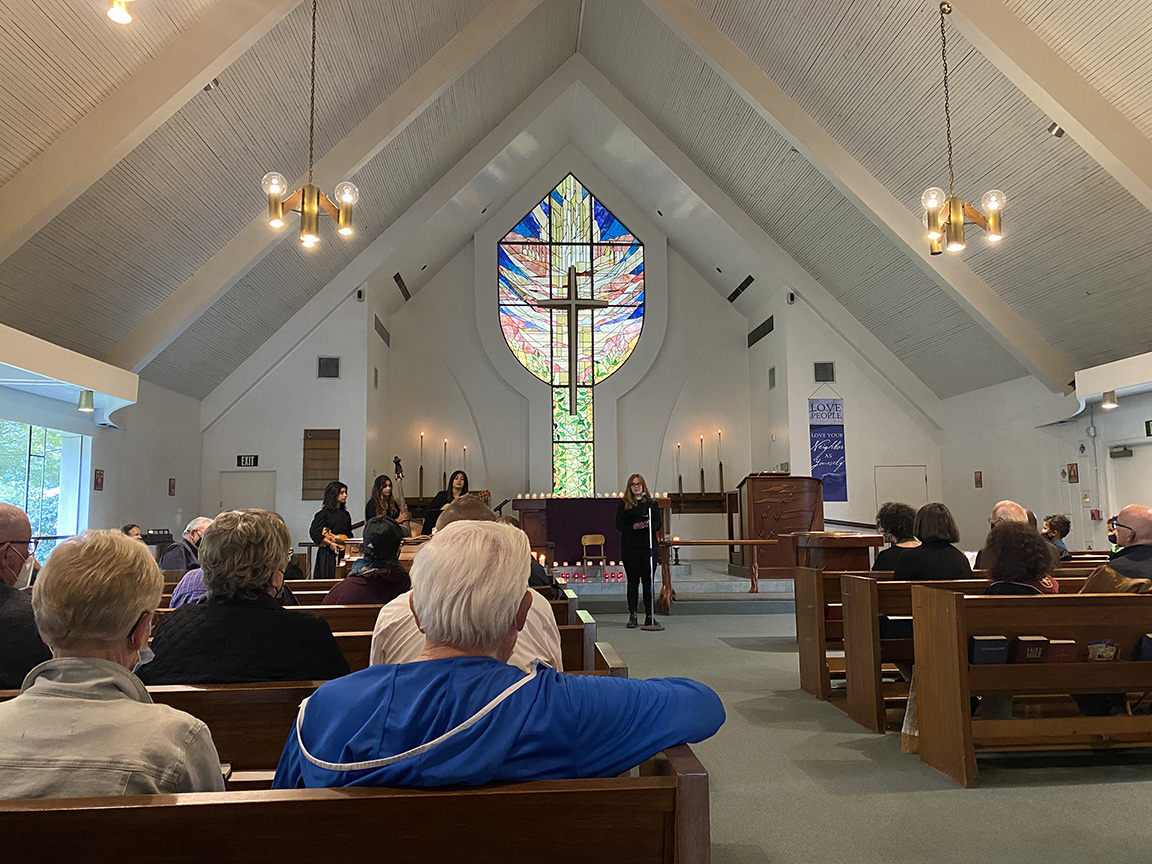 Jessie Smith, rector, leads prayers for victims of gun violence and issues a call to action at an interfaith vigil at St. Ambrose’s Church, Claremont, on May 28. Photo: Keith Yamamoto

[The Episcopal News] The Rev. Jessie Smith, rector of St. Ambrose Episcopal Church in Claremont, issued both an invitation to worship and a call to action to those attending a May 28 prayer vigil, “gathered again to mourn casualties of this recent cloud of massacres in the most innocent of places: a grocery store, a church, an elementary school.”

The Claremont church was alight with candles. Positioned in front of the altar was an empty child’s chair, “the kind found in elementary schools all over our country,” Smith said. “This chair is for those who are no longer with us, especially the children killed in Texas. The empty chair also plays a symbol of our grief for all those we mourn those killed in Laguna Woods, and those killed in Buffalo and those killed in too many other places by senseless acts of gun violence.” 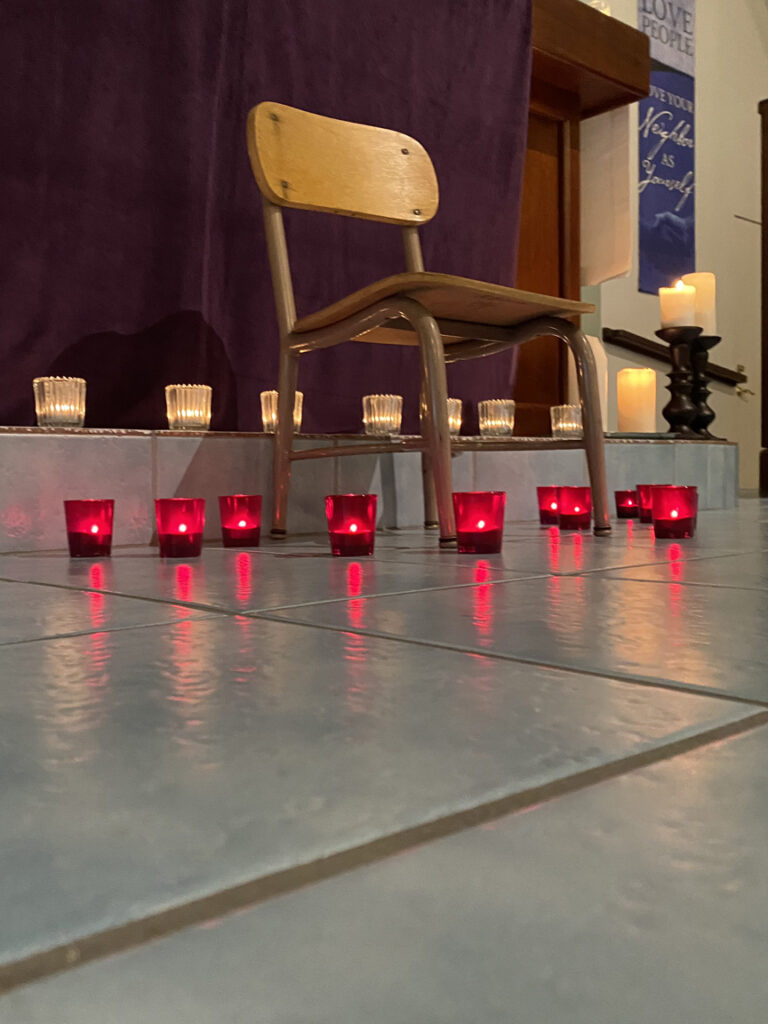 A child’s chair in front of the altar at St. Ambrose’s Church represents victims of gun violence. Photo: Keith Yamamoto

On May 24, 2022, an 18-year-old Salvador Ramos shot and killed 19 children and two adults at the Robb Elementary School in Uvalde, Texas. Earlier in the day, he shot and critically wounded his grandmother.

That attack came ten days after 10 African American shoppers were killed at a Tops Friendly Markets store in Buffalo, New York, on May 14. They were targeted by a white supremacist who livestreamed the attack, who was reportedly motivated by a far-right theory that people of color are replacing whites in the nation.

Smith told participants that the ‘Prelude to Action Vigil’ “is for everyone who finds themselves comfortless in the aftermath of violence, and it’s for everyone who wants to find strength to act, to exalt one another into a better way of being and making meaningful change in our world, especially around gun control.”

The vigil, organized by Claremont Faith Leaders, drew about 100 people from local Catholic, Presbyterian, Lutheran, Unitarian Universalist and Episcopal churches, as well as the Claremont Center for Spiritual Living, and the Urban Mission. It featured such musical guests as Trio Sol de Amores, and Al Villanueva and Roberto Roman, from Our Lady of the Assumption Catholic Church. 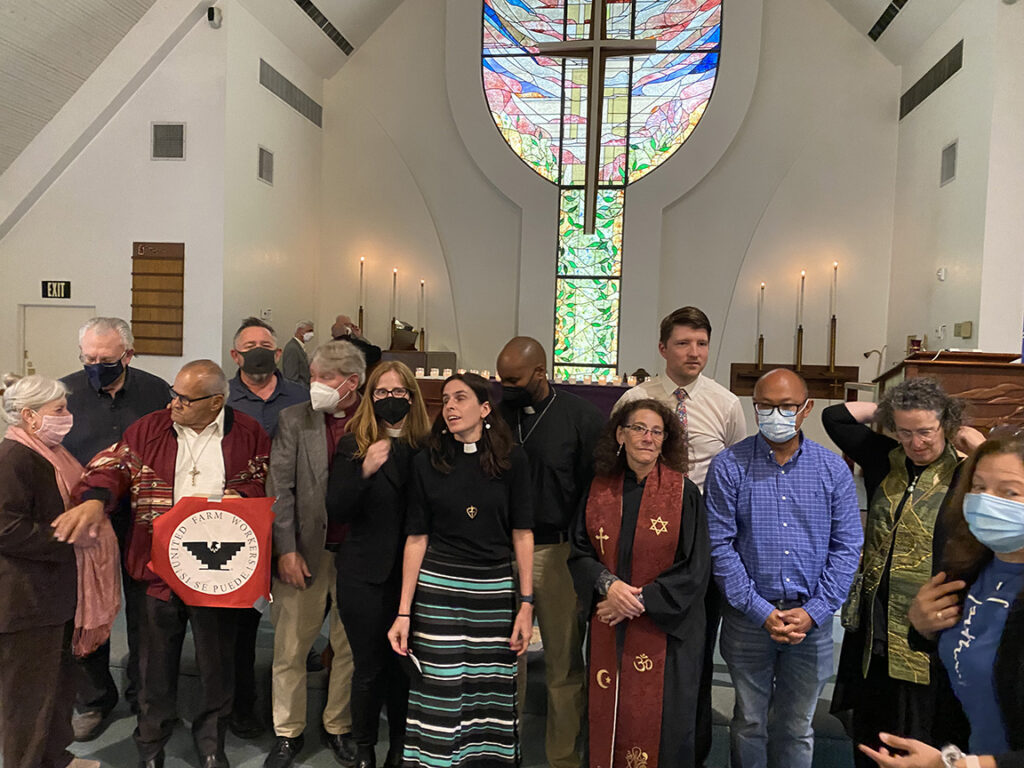 Interfaith clergy gather at the altar at St. Ambrose’s during the May 28 vigil and call to action for gun violence prevention. Photo: Keith Yamamoto

“The real victims are the children, the lost innocence of children,” Villanueva told the gathering.

The pair also performed “De Colores,” a song popularized in Cursillo gatherings but also adopted by Cesar Chavez and Dolores Huerta as the national anthem of the Huelga (workers’ strike) and United Farm Workers movement during the 1960s. It has Catholic spiritual significance, Villanueva said, adding that many of the innocent bilingual victims of the Uvalde mass shooting were Catholics and children of migrant workers.

Two separate litanies were offered, by the Rev. Lara Martin from Good Shepherd Evangelical Lutheran Church, and the Rev. Rene Martin of the Urban Mission, who galvanized the gathering with the repetitive rallying cry, “We refuse to be defeated.”

The Rev. Maggie Yenoki of the Unitarian Universality Congregation led a litany adapted from Bishops Against Gun Violence a group of about 100 bishops across The Episcopal Church, urging cities and local communities to take action through legislation against gun violence. 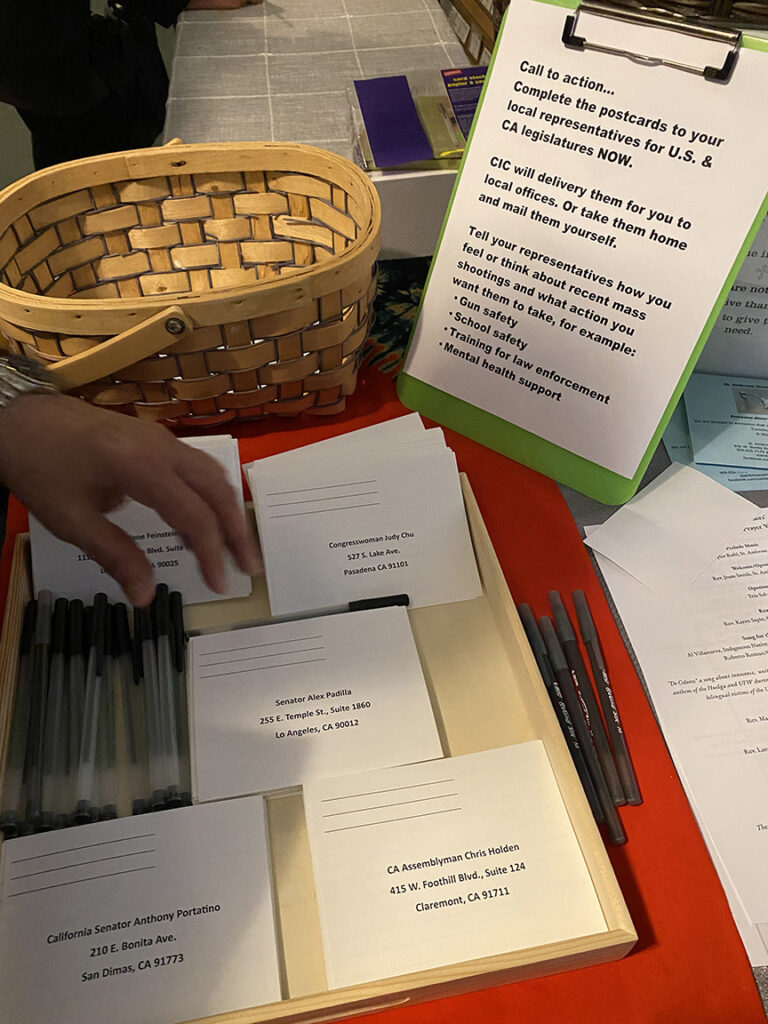 Clergy invited participants in the May 28 vigil to sign postcards to state and federal representatives and “to pray, advocate, give and to act” to end senseless gun violence. Photo: Keith Yamamoto

Yenoki invoked memories of dozens of previous mass shootings in the United States, including the 2012 murders of 20 children and six adult staff members at Sandy Hook Elementary School in Newtown, Connecticut, and the 2018 murders of 13 at the Borderline Bar and Grill in Thousand Oaks, California.

Smith and other clergy invited participants to make a commitment to ending violence, to sign postcards to state and federal representatives, and “to pray, advocate, give and to act” to end senseless gun violence.

“It is time for us to speak out even more, it is time for us to be disruptive,” Smith said. “Time to push our way to the front and hold those accountable responsible for what is happening. It’s time that we demand change as if it were our own children who didn’t come home from school.

“There is something each of us can do,” she added. “Whether we speak truth to power, or we show up to something using our bodies, or we make a statement with where we spend our money – paying attention to these agendas is supporting. Or we mobilize ourselves and others to vote. We all, every one of us here, can do something to address gun violence.”