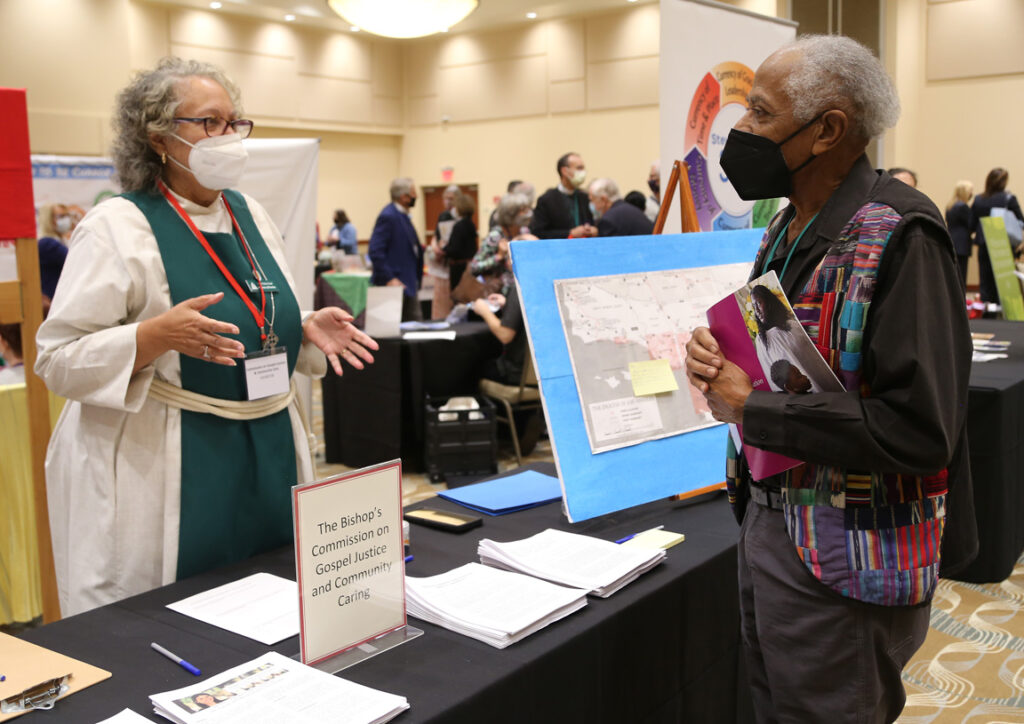 [The Episcopal News] As the Bishop’s Commission on Gospel Justice and Community Care continues to examine policing across Southern California communities, chairperson Sister Patricia Sarah Terry is meeting with clergy and asking Episcopalians to join a letter-writing campaign in support of including mental health first responders in crisis situations. She is also seeking art, articles, poetry, reflections, videos, photos, podcast episodes, and other creative expressions for inclusion in a planned Lenten daily resource guide to be made available online to the diocese.

With this multi-pronged effort she aims to assess and, she hopes, to build upon the character and strength of local church and police relationships, while also addressing community spiritual needs in a time of heightened tensions, said Terry, a former U.S. attorney and a member of the Anamchara Fellowship, a monastic community devoted to prayer and service.

“What we’re trying to do is find out where is our common ground, and where we can be most effective as a diocese,” she told The Episcopal News recently. “There are so many things that can be done, and there’s no one-size-fits-all.”

Bishop Diocesan John Harvey Taylor created the commission in April 2021 in response to local and national unrest after the May 25, 2020, murder of George Floyd by a Minneapolis police officer. The officer, Derek Chauvin, pinned Floyd’s neck to the ground with his knee for more than nine minutes. Chauvin was convicted April 21, 2021, of three counts of murder and was sentenced to 22-1/2 years in prison.

Calls to defund police amid rising crime and ongoing police-community tensions make the commission’s work even more crucial, Terry said. “There is no safe place, unless we’re all safe,” she said. What happens in one community affects adjacent communities, “even if we don’t see them as our neighbor.”

Defunding police is not the focus of the commission’s work, Terry added. Rather, the focus “is better use of resources, increasing resources and targeting them in ways that can be healing and give everyone in the community the protection they need and deserve, from not just the government but from whatever resources are available in that community.

“What we’re really doing is trying to learn what we can about the differences from county to county and from community to community,” she told a recent gathering of Deanery 10 clergy. “We feel there are some issues that need to be addressed for the betterment of all, to uplift the dignity of all and to protect all equally from the problems we’re facing as a society. Mental health is number one, that’s where we feel we can have the biggest impact.

“We are hoping by the fall, each congregation will have some plan of how they’re going to connect and build relationships with local police departments, how they can be connected, with regard to the issues of community care and mental health.”

The commission invites members of local congregations to fill out and forward this letter in support of HR 1368 to their local law enforcement officials.  HR 1368 provides for creation of a grant program for states and local governments to train and dispatch mental health professionals, instead of law enforcement officers, to respond to emergencies that involve people with behavioral health needs.

During their meeting, Congresswoman Porter thanked the commission members for their support and emphasized the importance of developing broad coalitions with health care professionals, such as emergency room doctors and nurses who witness challenges first-hand. She also spoke of the need to develop broad interfaith support with faith-based groups, Terry said.

The Rev. Alene Campbell-Langdell reported that 26 letters in support of the measure were signed during the Nov. 13 – 14 diocesan convention and were sent to Congress.

Art, photos, essays, articles, reflections, podcasts, and other creative expressions are welcomed for inclusion in a Lenten resource guide focused on issues of policing, mental health, and racism, according to the Rev. Canon Jaime Edwards-Acton, a commission member.

“We are creating this resource for individuals and churches to use as they wish,” he said. For example, one such resource, about mental health and policing, is a YouTube video called “Say His Name – Miles Will Create Change,” created by the Justice for Miles Hall Foundation.

“He was a young Black man who had suffered from schizophrenia. His parents had tried to work with the police to be proactive about his condition. The neighbors, the community knew about him,” Edwards-Acton said. The family had worked with local law enforcement for two years in an effort to avoid any future confrontations. Yet Walnut Creek police officers were called June 2, 2019, while Hall was having an episode, and responded with lethal force, killing the 23-year-old.

The foundation that bears Hall’s name was founded by the family with the $4 million settlement they received from the city over Hall’s murder.

Edwards-Acton, who will organize and post resources daily during Lent, said all contributions are welcome. “We hope to generate a conversation on our Facebook page. People will be able to comment and post other resources. The more voices, the better on these issues.”

He added: “Part of it is to figure out how communities can be moved to act, to do something – individuals, churches, communities, as they explore getting more deeply involved in these issues.”

Additionally, Terry said she has met with clergy of two diocesan deaneries and is scheduled to meet with three more. She is hoping to receive invitations from the other five for online gatherings to listen and to share how they may participate in the commission’s mission.

Rhambo, who retired as an assistant sheriff in 2014 from the L.A. County Sheriff’s Department, is among candidates opposing incumbent Chief Alex Villanueva in the upcoming November 2022 election.

Commission members questioned Rhambo about his views of the training and role of chaplains in the sheriff’s department, as well as humane treatment in the jails, as well as community policing.

“The more humane we make the jails, the more humane it is for the people working in the jails,” Rhambo said in response to a question about appropriate deployment of personnel.

The group has also discussed advocacy and support for other legislation, such as local and state efforts for alternatives to policing, such as California Measure J, and also AB-988, also known as the Miles Hall Lifeline Act.

Measure J was approved Nov. 3, 2020, by L.A. County voters and was adopted a week later by the L.A. Board of Supervisors. It dedicated no less than ten percent of the county’s locally generated unrestricted funding to address the disproportionate impact of racial injustice through community investments, such as youth development, job training, small business development, supportive housing services and alternatives to incarceration.

However, June 17, 2021, L.A. County Superior Court Judge Mary Strobel announced a tentative decision to overturn Measure J. She ruled the measure unconstitutionally limits how supervisors can decide revenue allocations. The county appealed the tentative decision; no final ruling has been entered as of this date.

Another pending bill, AB-988, would create a new three-digit phone line, 988, for suicide prevention and immediate, localized emergency response for individuals in mental health crisis by trained health professionals in the state of California.