Diocesan Council: Connecting congregations to the diocese with a ‘remarkable team of leaders’ 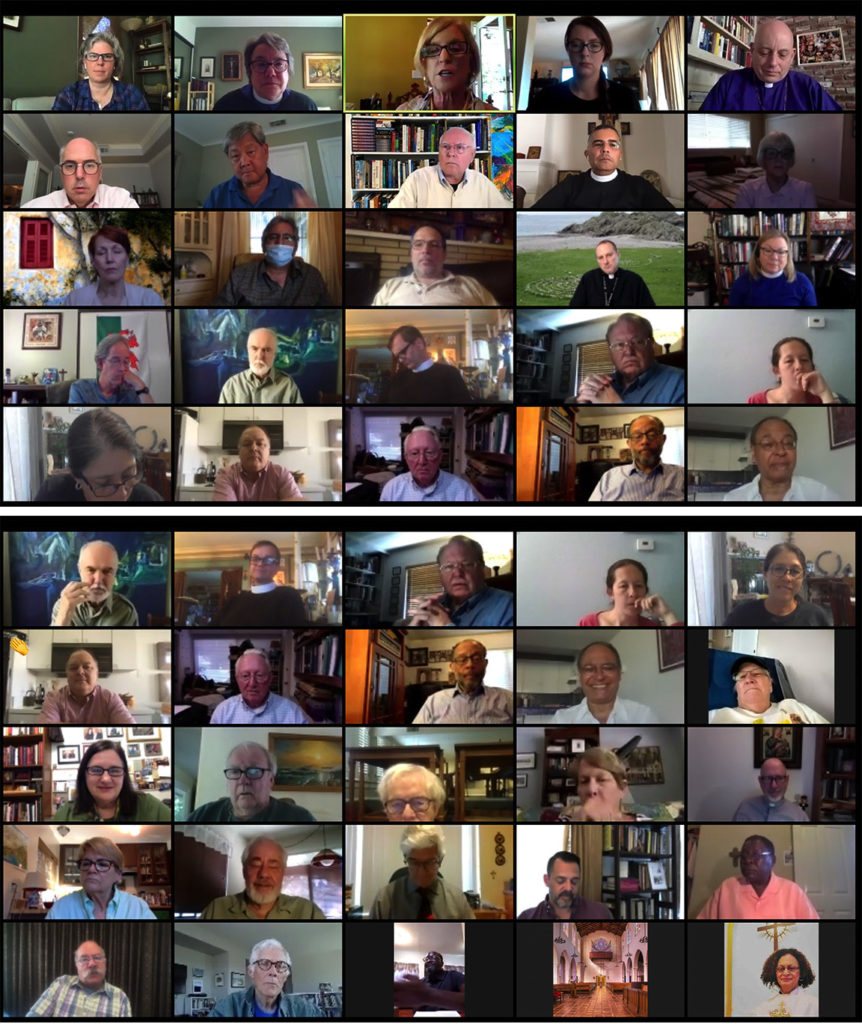 Diocesan Council is pictured at a virtual meeting in May 2020. The council includes representatives from all 10 deaneries of the Diocese of Los Angeles, plus the diocese’s bishops, finance and administrative staff, representatives of diocesan organizations such as the Episcopal Church Women, and three clergy and three lay delegates-at-large. Diocesan Convention elects one representative in each order each year for rotating three-year terms.

Ken Higginbotham Jr., and other Southland Episcopalians say their service on Diocesan Council is both “challenging and rewarding,” and urge others to “put your name on the ballot and become part of this remarkable team of leaders.”

These leaders have “an impact, not only within our diocese, but with the overall mission of the Church,” says Higginbotham, son of the Rev. Canon Kenneth Higginbotham Sr., who died in 2010. His father served as a priest in the Diocese of Los Angeles and was a former rector of Christ the Good Shepherd Church in L.A.

The younger Higginbotham was elected as a member-at-large for his second 3-year term at the 2018 Diocesan Convention. A member of St. Stephen’s Church in Santa Clarita, he chose to run again after his first term because, he said, “I wanted to be part of a very strong, spiritual and committed group of church leaders that supports the bishop’s agenda in the continuance of doing God’s work.”

Although the responsibility of overseeing finances, budgets, property issues, congregational development, and administrative policies and programming between meetings of convention may not seem all that fascinating, Higginbotham finds it a labor of love with huge benefits.

Included among those benefits is the opportunity “to see the broader mission of our Church,” he said. “It has impacted my faith and commitment to the church in such a positive way, especially with the challenges we as Christians are confronted with — Covid-19, social injustice and a volatile economy — our spiritual covenant and faith are being tested.”

Serving in this way helps him to “know that the Holy Spirit is with us always. It is important that we roll up our sleeves and give of our time, talents and tithe so that God’s work in our churches and communities continue.”

Similarly, Nancy Doss’s enthusiasm for serving the larger church was kindled several years ago after she completed a vacated vestry term at Trinity Church in Redlands, where she has been a lifelong member and has sung in the choir since age 6.

Her vestry service led her to deanery involvement, which sparked a deeper desire for engagement. “I started to learn more about what happens in the diocese and how it works.

“I believe that sometimes those of us in the eastern part of the diocese don’t always get the same attention as those whose parishes are in the greater Los Angeles area. I decided, I’m going to get on council and see how it all works and see what we can do,” said Doss, 74.

After a career in the corporate banking and insurance world, where “everything was top-down, I was pleasantly surprised,” she said. “I was surprised that there is this council, and a bishop who listens to us all. If we think there may be a better way to do something, he listens.

“It doesn’t mean he’s going to do what we say, and that’s fine,” she added. “That’s his job, along with Bishop [Suffragan] Diane [M. Jardine Bruce] and [Canon to the Ordinary] Melissa [McCarthy], to determine what’s best. I thought that was wonderful.”

The council meets once monthly, usually on the second Thursday. Pre-COVID-19, meetings were held in person at St. Paul’s Commons in Echo Park. Since the onset of the pandemic, the meetings have taken place online.

Diocesan Council includes three clergy and three lay leaders elected for three-year terms by diocesan convention delegates. Additionally, each of the ten geographic deaneries that make up the diocese elects one clergy and one lay person as representatives of their local area. Doss was elected to represent Deanery 7.

As the diocese prepares for the Nov. 13-14 convention at which delegates again will elect representatives for those offices, Doss has plans for even deeper engagement.

“I want to run for the Commission on Ministry next,” Doss said enthusiastically, hoping to land a spot on the diocesan group offering support for aspiring clergy during their discernment. “Because that process fascinates me.”

The council is assisted in its work by committees on Agenda and Planning, Budget, and Structure and Membership. Each committee is composed of council members, whose terms of service on the committee correspond with their council terms.

Ann Seitz, a parishioner at Emmanuel Church in El Monte, has served since 2003 as a Deanery 5 lay delegate to council. She believes membership “keeps you informed about what’s going on in the diocese and [it] has allowed me to get to know a lot more people in the diocese.”

Seitz, who is also Deanery 5 president, chairs the council’s Structures and Membership Committee. In that role, she schedules representatives from the diocese’s commissions and program groups who report to the bishops and council members about their ministries.

The Program Groups of Diocesan Council help the bishop and staff in formulating and carrying out plans and programs approved by diocesan convention. The bishop appoints members of program groups; each program group has an appointed liaison from the council.

For Seitz, 78, serving on diocesan council “has given me opportunities in the diocese I might not have had otherwise. This year, it’s been interesting, because we haven’t been doing things the same way we’ve done them before.”

Another benefit is “getting to know the diocesan staff. The bishops are at the meetings, you get to know people, you have an opportunity to know people you might not otherwise meet.”

A cradle Episcopalian, she recalled a family legacy of service. “My father was the volunteer director of communications for Bishop Bloy,” she said. “My mother was directress of the diocesan altar guild” and also served on the Presiding Bishop’s Fund for World Relief, the precursor to Episcopal Relief and Development, the disaster relief agency of the Episcopal Church.

“It is a good thing to run for the various offices,” said Seitz. “That’s the kind of church we are, the kind of church that is supportive, with many things run by laity rather than clergy. We need both lay and clergy involvement.”

She encourages everyone to get involved. “Just do it, is my advice. If you are thinking about it, why not? Running for anything isn’t ever a mistake. There are a lot of different ways to serve. And serving on the diocesan level brings you closer to church. It makes me feel as if I’m contributing something, rather than just going to church on Sunday.”

Another benefit is the sense of camaraderie that develops among Diocesan Council members, according to Doss and the others. “You make friends, you develop a network that you can call and ask questions.”

Additionally, Doss has realized “the role of the parish in the diocese and how important it is for us to speak up and not just think we’re out here all by ourselves, whether we are in a large church in the city or out here in the hinterlands. That we are all a part and equal in many ways and that the diocese can help us.”

The broader church, she had come to recognize, is “a great big group of people who have different missions in our own parishes, but we’re all one body.”

To be a candidate for Diocesan Council delegate-at-large, visit the convention website here for a nomination form and instructions.