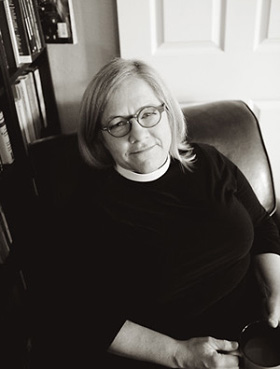 CPE — clinical pastoral education — was once designed to hone pastoral care skills for clergy-hopefuls only, but an exciting new program in the Los Angeles diocese aims to offer the training to laypersons also.

The program, called CPE for Laity, is the vision of the Rev. Jana Milhon-Martin, CPE supervisor at Good Samaritan Hospital, who is betting that in just about all of the diocese’s 135 congregations are lay people with strong gifts and skills that, if empowered, will enrich the entire community.

CPE offers freedom from the belief that chaplains, or pastoral caregivers, “have to have all the answers,” Milhon-Martin told The Episcopal News recently. Rather, those who are suffering need someone to just be present with them.

“It sounds so simple, but it is incredibly difficult,” added Martin, who received a $125,000 Trinity Wall Street grant and diocesan funding for the project.

“Even now, as a chaplain who’s been training for four years beyond my ordination, I still responded to a fetal demise a few weeks ago feeling like I needed to do something,” Martin recalled. “I needed to fix something. The work is not to respond to those anxious expectations we place on ourselves but instead to be present to those who are suffering.”

Bishop Diocesan John Harvey Taylor, who contributed to the project from his discretionary fund, told The News, “In a secularizing, spiritually ravenous time, CPE nurtures our most powerful and countercultural spiritual gifts, including non-anxious presence, listening, acceptance, and trust.

“Chaplains, deacons, and priests use them to make sure they leave room for God in every encounter and situation, even those of incredible stress and loss. I couldn’t be more excited and proud, thanks to Jana Milhon-Martin’s devotion and creativity, that these gifts will be offered to all the baptized, beginning in our diocese.”

CPE, a requirement for every seminarian who hopes to be ordained, invites self-examination and reflection about encounters with patients, typically in a hospital or medical care center setting. It is meant to augment traditional seminary education which “trains us to think historically and retrospectively about the development of Christian ideas and beliefs,” Martin said.

“But it does not help us read a live human being in front of us and understand what kinds of religious coping is happening, or the reactivity that occurs in us when we encounter, not just theologies, but people who cause us to feel reactive.”

Roch Smith attended a similar CPE for Laity session led by Martin earlier this year at Trinity Church in Redlands. It transformed his life.

A chaplain at San Gorgonio Hospital in Banning, Smith, 70, said he had no idea what CPE involved when he joined the sessions.

“I used to think that ministering to people was a job I had to do and there was something that I had to carry in there that would fix their problems,” Smith told The News. “When really I just needed to carry the love of the Holy Spirit and allow people to share their story and their need and their life and whatever else.

CPE taught Smith, a recovering alcoholic and addict, to stop “trying to get people to buy into my solution … and instead to walk with them spiritually side by side, listen to their story, become part of their walk … and let them come to their own answers.”

It worked in his own life, he said.

When a tough divorce left him broken-hearted and dispirited in 1980, “I had no spiritual tools or bag of tricks, no spiritual outlook,” he said. “I lost my identity as a husband and father. I started drinking and drugging and ended up as a homeless drug addict.”

CPE taught him skills that sustained him more recently during the death of his fiancé. “It saved my life,” he said. “When you talk about CPE being important for lay people, it’s the most important class I’ve ever taken. It saved my life, the direction of my life.”

Similarly, when Gwendolyn Douglas enrolled in that same course, she had no idea what CPE involved. The experience has helped her discover a vocation as a hospice chaplain, she said.

“I never ever thought God would call me to be a chaplain,” Douglas said. “I am like the last person in the world that he would call to do something like this. It fills my soul.”

Reflecting about her interactions with patients “was very surprising to me, because I’d never done anything like that. Now, I understand it’s about you and making sure that you and your theology are — for lack of a better word — okay, so when you go into a room you’re not imposing your theology. And, if something triggers you, you understand why.”

Martin plans to start recruiting in January 2021, for two separate groups, slated to start meeting in March under the auspices of Bloy House (ETSLA, the Episcopal Theological School at Los Angeles). She is hoping congregations will host the sessions.

“What I’d like to do is to run two cohorts in the diocese that are as diverse as possible … and then see what I can discover about that and to create resources for other people who want to do this kind of training, and see if I can develop resources to equip them.”

The sessions will include 12 in-person meetings and eight online follow-up gatherings with “spiritual assessment embedded into each week.”

“It’s really about cultivating knowledge that people already have and getting them to have some kind of critical reflection about it,” Martin said.

Eventually, she hopes the church will find a way to recognize the gifts and graces of laity in congregations who are pastoral caregivers. “I want to raise up people who are good souls who know how to be with people. That may not be people who come from a traditional educational background.

“I want it to be radically available to people who, maybe their first language isn’t English.

“The truth is, the project is about exploring how this can work and I’m excited about it.”

She hopes it will lead, eventually, to a diocesan certification program for lay pastoral caregivers, “and it’s understood in the diocese what that means and what they can do. There should be a pool of them in every deanery. It could be organized in ways that would cost us so little money and provide so much emotional and spiritual support to people. Right now, people need it; they’re in distress.”

She added: “The work of CPE has liberated me from narratives that held me captive. I want to share that gift as widely as I can.”