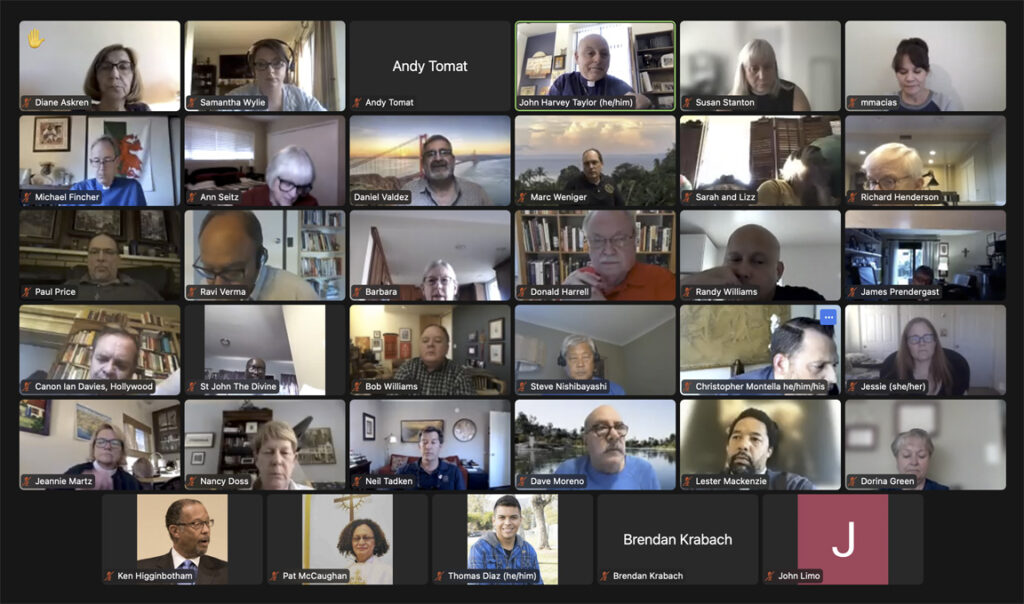 [The Episcopal News] Members of the St. Paul’s Commons staff have joined with some of their counterparts from the Diocese of Northern California for a “very appropriate for Black History month” ten-week anti-racism program, Bishop Diocesan John Harvey Taylor announced at the Feb. 10 meeting of Diocesan Council.

“We are reading about white fragility, white supremacy, white privilege, forms of racism” as part of “Sacred Ground,” he said. The film- and readings-based dialogue curriculum on race is a part of Becoming Beloved Community, The Episcopal Church’s long-term commitment to racial healing, reconciliation and justice in ministries, society and personal lives.

Diocesan congregations contributed about $51,000 more to the Mission Share Fund (MSF) than the actual $4 million budgeted in 2021, representing a 3.4% increase over 2020, yet fell slightly short of the hoped-for $4.1 million goal, Tomat reported.

The outcome represents a continuing trend of increased giving to MFS, which makes up about one-half of the overall $9.8 million annual diocesan budget. The MSF budget, anticipated at $4.25 million in 2022, is the primary funding source for diocesan programs, institutions, and mission congregations.

The MSF funds development grants to some 27 mission congregations, intended to aid retention of consistent clergy leadership and general operating expenses – grants that were reduced overall by about $100,000 in the current budget. About $1 million is typically awarded yearly in MDGs, ranging from $4,500 to $88,000.

A mission congregation receives financial assistance and is incorporated as part of the diocesan structure. A parish is self-supporting and separately incorporated, though it holds its property in trust for the diocese.

Parishes are expected to pay 12-15% of their net operating income from two years prior as their MSF pledge. For example, in 2022 the amount a parish would be expected to pay is based upon its net operating income as reported in its 2020 parochial report (and as reviewed by its audit committee). Missions are required to pay 15% of their annual plate and pledge income to support the Mission Share Fund, Theological Education Fund, Mission Vicars’ Sabbatical Fund and Mission Capital Repairs Fund.

Tomat expressed concern that the 2021 budget had anticipated $418,000 in income through grants and other fundraising, but the actual amount received was $261,000, a 63% shortfall., while expenses for these programs are slightly greater than anticipated.

Hiring deferrals and cancellation of some events, like the annual clergy conference, helped to offset expenses, he added. But, in other areas, like the St. Paul’s Commons’ retreat center, pandemic-related income loss was not offset by reduced expenses. “There is a fixed level of expense involved in running the retreat center,” whether it is open or not, he said. “That is a consideration as we go into 2022.”

Although MSF income remained strong through November of 2021, the last month of the year unexpectedly included a nearly $172,000 deficit, he said. “Usually, the December mission share fund is very strong, almost like a double month. That is why we hoped to get closer to $4.1 million, but it didn’t happen.”

The joint budget committee will review the 2021 results and determine if adjustments “are needed to the 2022 budget, to maintain the balanced budget we finally achieved,” he said.

Bishop John Harvey Taylor said, “We will be prudent in our MSF predictions and hopes for the current year. We were hoping for $4.1 million 2021, … but $50,000 is probably not going to break the bank. I am grateful we didn’t predict more for 2022.”

Reports of diocesan ministries and mission

Ravi Verma reported that the Corporation of the Diocese has appointed subcommittee officers and approved readiness packets for lease agreements for St. Luke’s Church in Monrovia with a trilingual community school, and for St. Simon’s, San Fernando, to the Old Catholic Church. The Corporation usually meets on the third Tuesday of each month; they will gather next on March 15, 2 – 4 p.m.

The Standing Committee has consented to the Nov. 6, 2021, election of Juan Carlos Quiñones as bishop of the Diocese of Central Ecuador; and is seeking additional information regarding Brian K. Burgess, elected Dec. 11, 2021 to be bishop in the Diocese of Springfield, Illinois, according to the Rev. Lester Mackenzie.

“We are working on a letter to receive more information from one of the potential bishops,” he said. “We are also discerning a new policy of researching bishop-elect’s positions and how to ask question when appropriate or deemed necessary before giving consent to their elections.”

Taylor noted that concerns also have been raised by bishops about Burgess’s adherence to church canons “with respect to orientation and identification and the sacramental equality of all before the throne of God. Letters are being written and responses are being sent, and the church is deliberating prayerfully.”

In accordance with canon law, a majority of bishops with jurisdiction, or diocesan bishops, and standing committees from each of The Episcopal Church’s 110-dioceses must consent to episcopal elections.

Taylor also reported meeting with leaders of the diocesan Episcopal Church Women, the Order of the Daughters of the King and Girls Friendly Society, as they seek “strategic, forward-looking ways … to preserve, protect and extend the values of these organizations which all have to do with the empowerment of women and girls.”

A search is underway for a successor to the Rev. Canon Kelli Grace Kurtz as convenor of the Program Group on Mission Congregations, Taylor said.

The Diocese of Los Angeles deputation to General Convention has elected Canon to the Ordinary Melissa McCarthy as its chair, according to Thomas Diaz, the deputies’ liaison to council.

McCarthy was absent from the diocesan council meeting, attending a meeting of the General Convention Churchwide Leadership Committee.

Canon Steve Nishibayashi, secretary of convention, said 2021 parochial reports are due March 1, 2022. As in 2021, they have been amended to reflect the ways the Covid-19 pandemic has affected congregations. Five reports have been filed and another 14 are in progress, he said.

The reports include information about local congregational finances, pledges, and attendance, and are used in overall planning and budgeting. They will be crucial in planning leading up to the 81st General Convention, to be held in July 2024 in Louisville, Kentucky, he said.

The pandemic-related postponement from 2021 of the July 7 – 14, 2022 convention in Baltimore extended the last triennium to four years, and shortens the next one to only two, complicating budgeting and other planning, Nishibayashi explained.

The 2022 diocesan convention is planned for Nov. 11 – 12, at the Riverside Convention Center.

Diocesan convention coordinator Samantha Wylie announced the Saturday, Feb. 12, kickoff of this year’s virtual ministry fair series, “Truth and Love: The Work of Ministry.” Workshops will be listed on the convention webpage as they are scheduled, and also will be announced in the Episcopal News Update (subscribe here.)

A conversion to virtual banking will begin in the second half of 2022 and be completed by year-end, he said.

Canon Anilin Collado, missioner for human resources, is leading the committee seeking a credit union manager to succeed Urla Gomes, who will retire for a second time in June, he added.

The commission, chaired by Sister Patricia Sarah Terry, is also compiling entries for a planned daily Lenten Resources guide for individuals and congregations, accessible from the commission’s Facebook page. The Rev. Canon Jaime Edwards-Acton is facilitating that page; contributions may be sent to him at hopeinhollywood@gmail.com.

“We will be posting reflections, first-hand experiences of encounters with law enforcement and any expressions of where the Spirit has been moving in those areas and needs to move,” Williams told council members. “We also invite you to like the Facebook page.”

Taylor said the commission was started in response to the May 25, 2020, murder of George Floyd, an unarmed Black man who died after a Minneapolis police officer pinned him to the ground with his knee for more than nine minutes. The death sparked international outrage, protest and calls for change.

The Executive Council of The Episcopal Church has called on dioceses to become active in racial justice issues, Taylor recalled, adding, “We’re in it for the duration.”