[The Episcopal News] St. Gabriel’s Church in Monterey Park, a Cantonese and English-speaking congregation, recently celebrated its 39th anniversary, and has begun outreach to Mandarin-speaking immigrants in neighboring communities, the Rev. Hsin-Fen “Fennie” Chang reported at the June 9 regular meeting of Diocesan Council.

The rich diversity of Chinese language ministry in the diocese also includes St. Thomas’, Hacienda Heights, where Filipino, Taiwanese, Chinese and Anglo members worship in Mandarin and English weekly, and where Chang serves as vicar.

Additionally, the Church of Our Saviour in San Gabriel hosts a Mandarin-speaking congregation and the Li Tim Oi Center, a nationally recognized hub for Chinese ministry and a Bloy House partner, offering programs ranging from children’s ministry to senior fellowship, and lay and ordained leadership training.

“The vision of Chinese ministry in the greater Los Angeles area is to reach out to the surrounding Chinese community, to spread God’s love and good news to Chinese immigrants, and to make them feel welcome,” Chang told the council.

The center was named in honor of Li Tim Oi, who on Jan. 25, 1944, during World War II, was the first woman ordained a priest in the Anglican Communion. Later, she was forced to relinquish that role. Eventually, she moved to Canada where she again was licensed and served as a priest until her death in 1992. She is commemorated on Feb. 24 in the Episcopal Church’s calendar of saints.

“We hope to raise up Chinese-language speaking ministers, not only in our diocese, but across the nation” as part of a larger church-wide network, The Episcopal Church Asiamerica Ministries, said Chang, who is a deputy from the Diocese of Los Angeles to the upcoming General Convention.

“We are happy that, for the first time this year, we have been invited by the diocese to submit a request for a budget to the department of finance” for 2023, she said, adding that members of the Chinese language ministry have been meeting with Bishop John Harvey Taylor and Canon to the Ordinary Melissa McCarthy to envision church planting possibilities.

“All that we’ve been doing needs to grow and needs your support,” Chang added.

Taylor told council that Chang and the Rev. Katherine Feng of Church of Our Saviour, have been invited to assist with translation for Taiwan Bishop Lennon Yuan-Jung Chang and his spouse, Hannah Fen-Jan Wei, respectively, during the July 26 – Aug. 8 Lambeth Conference, a gathering of bishops from across The Episcopal Church and the Anglican Communion, which Taylor will attend.

Many of the congregations lagging in payments – especially larger amounts – are also experiencing clergy and lay leadership transition, Tomat said.

The finance department and MSF missionaries have strategized about approaching congregations “to help offset some of their arrears and get current when it is reasonably possible, without positioning ourselves as collections agents,” said council member Dan Valdez, a financial services professional, board chair of the Episcopal Community Federal Credit Union and a seven-times lay deputy to General Convention. He also serves as a volunteer MSF missionary.

“It’s a delicate dance,” he added. “We’re trying to balance a pastoral approach with the need to collect these funds. It’s incredibly important to collect as much of the past due pledges” as possible, because they fund ministries.

Taylor said the core work of council, both canonically and constitutionally, is “to do all it can to ensure the budget enacted by prior year’s convention can be effectuated, and in this particular case, making sure the promised revenues come in.”

This “good and holy and necessary work” is also delicate, Taylor said, “in these difficult economic times, as prices of gas and so many other things challenge members of our churches living on fixed incomes, and those who aren’t as privileged as others.”

Tomat also reported that Corporation of the Diocese income appears better than budget because of an influx of about $110,000 in additional program income from government agencies for the Interfaith Refugee and Immigration Service (IRIS) to aid an increased number of refugees. Expenses for such outreach programs as Seeds of Hope and the Interfaith Refugee and Immigration Service, or IRIS, are in line with their budget, he said.

The Program Group on Mission Congregations met June 2 with the Rev. Anthony Guillen, The Episcopal Church missioner for Latino-Hispanic ministries and director of ethnic ministries, to discuss strategies for planting new congregations in Latino-Hispanic communities, according to a written report submitted by the Very Rev. Canon Gary Hall, program group chair.

The PGMC also has begun the process of revising the Theology of Mission policy manual for mission congregations.

Both the Corporation of the Diocese and the Standing Committee approved the purchase by St. James in-the-City Church, Los Angeles, of a nearby property to expand its school.

At its May 25 meeting, the Standing Committee received a capital campaign presentation by Taylor and Jessica Savage, executive director of CCS Fundraising, according to the Rev. Lester Mackenzie, the committee’s council liaison.

The committee also expressed concerns about possible procedural and canonical violations  regarding the May 14 election of the Rev. Charles Holt as bishop coadjutor for the Diocese of Florida. Those concerns will be conveyed by letter to the Rev. Michael Barlowe, General Convention secretary and executive officer, and to the Rt. Rev. Diane M. Jardine Bruce, secretary of the House of Bishops, Mackenzie said. 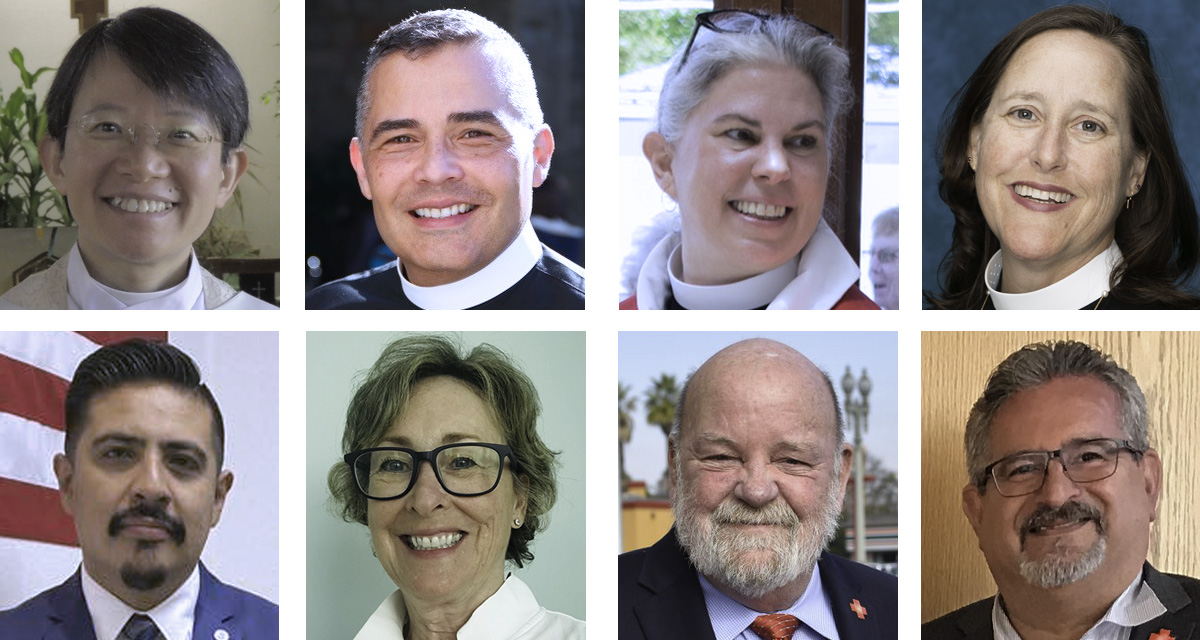 The upcoming July 8 – 11 General Convention of The Episcopal Church in Baltimore will be “shorter, smaller and safer,” according to Thomas Diaz, liaison to council from the Los Angeles diocese’s General Convention deputation. The deputation’s personnel has also changed significantly because of transitions and Covid concerns.

Secretary of Convention Steve Nishibayashi reported that as of June 9 there were 185 days until the November 11 – 12 annual meeting of the diocese, themed “Back to the Holy City: The Hope of Christ in Our Time,” at the Riverside Convention Center.

He asked congregations to provide delegate information updates to his office. The delegate form, as well as the link to make hotel reservations, is available on the convention website.

McCarthy reported about the rich diversity among diocesan congregations she had recently visited, from St. Martin in-the-Field, Twentynine Palms, to Church of the Messiah, Santa Ana.

Other recent visits included Church of the Holy Communion, Gardena; St. Gabriel’s, Monterey Park’s 39th anniversary celebration; The Gathering’s Pentecost service at All Saints, Pasadena; and St. Marks, Upland, where she served as guest preacher for the 40th anniversary celebration of the ordination of the Rev. Robin Clark, who began her ministry at the Upland congregation.

Taylor offered a preview of the 2023 budget process and program year, noting that “our goal is to bring to convention another balanced budget. It’s just not going to be easy. But we’re resolved once again to do it without selling sacred real estate, without dipping into any more than the appropriate draw amount from endowment or endowment-like accounts. We’re not going to burn capital anymore.”

Programmatically, 2023 will be focused on racial reckoning, “pointing toward a more abundant future for all the reasons of evangelism and community that have been expressed,” he said. In meetings with New Community program groups, including the Chinese clergy and clergy of African descent, and the diocesan Program Group on Global Partnership, “we are telling them to dream a bit” about budgeting and programming for 2023, he said.

Taylor encouraged everyone to participate in the Saturday, June 18 (4 p.m.) Juneteenth celebration, at which he will preside, at St. John’s Cathedral.