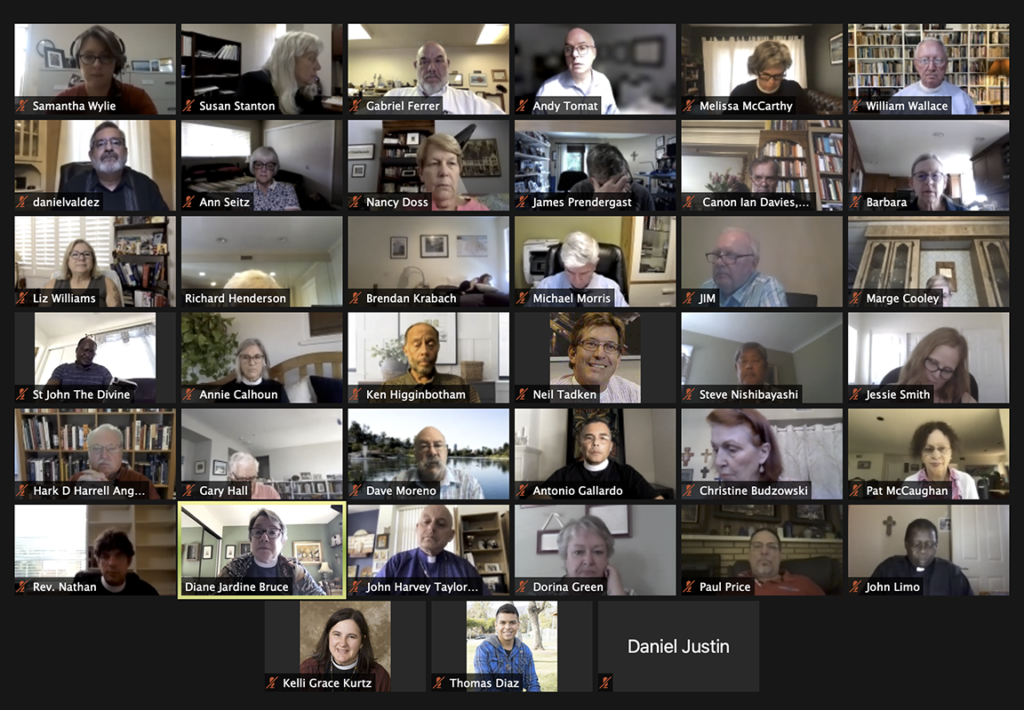 [The Episcopal News] Mission congregations in the Diocese of Los Angeles must submit their requests for 2022 funding through the mission development grant process by July 31, the Rev. Canon Kelli Grace Kurtz, chair of the Program Group on Mission Congregations, announced at the July 15 meeting of Diocesan Council.

All mission congregations should have received an email reminder of the deadline, she said. Additionally, Kurtz reported that she and Canon Andy Tomat, diocesan treasurer, have been in conversation to enable him “to better understand the process that we use to review the grant applications for mission congregations so that can be part of the budget planning for the diocese as a whole.”

Council members also heard a positive financial report and received updates on New Community ministries and plans for diocesan convention, as well as the Standing Committee’s response to the Lombard Mennonite Peace Center report following the 15-month reconciliation process engaged by the diocese from Feb. 2018 to May 2019 (see related story).

Tomat told council he is heartened that congregational giving levels appear to be returning to pre-pandemic levels and, in some cases, at higher percentage levels than in prior years, “although still well below the 12% canonical minimum. Generally, the smaller, less-resourced parishes are the ones giving at the highest percentage levels. All missions give at the 10% level.”

Based on the higher percentage giving, he said, “I would project that we will end the year in the $4.2 to $4.4 million range, which is back to our normal pre-COVID levels. We appreciate the support we are receiving from all churches.”

He urged caution, however, adding that he expects expenses to ramp up during the second half of the year as St. Paul’s Commons reopens and the bishops resume travel. “We continue to draw from Corporation of the Diocese savings in the Diocesan Investment Trust as required to meet our cash needs.

“I am not yet willing to project we will end the year in a surplus since these expenses will ramp up in the second half of the year. Any surplus results in added COTD savings, which can be used to cover shortfalls in 2022 and 2023.”

Tomat also reported that 60 out of 92 parishes have submitted pledge forms, although many who are giving have not yet pledged.

Deanery representatives to diocesan council are asked to assist the finance department in collecting the remaining parish pledge cards. “The Finance Office will email each missing parish a new pledge card and copy their deanery representatives. Please place a call to the rector and/or administrator asking that it be returned with an indication of their actual 2021 pledge amount. Canon Clare Bangao will be working to update the mission pledges,” he said.

The Joint Budget Committee will continue to meet in July and August to review these submitted budget requests and looks forward to presenting its first draft 2022 budget to the governing bodies, including Diocesan Council, in September, he said.

Bishop Suffragan Diane M. Jardine Bruce reported that the convocations of each of the New Community ministries – Latino/Latinx; Black; Indigenous; Korean; Episcopal Asiamerica; Filipino; Chinese; Japanese and The Gathering Space for Asian Spirituality – have continued to meet virtually and are planning fall programming, although the South Asian and Vietnamese ministries are in leadership transition.

Diocesan Bishop John Harvey Taylor noted that the Program Group on Black Ministries response to The Episcopal Church racial audit and the work of racial justice “is absolutely vital work. It invites those of us who have privilege – particularly those of us who are white who sometimes really have to work at it – to be willing to admit to ourselves, looking hard in the mirror, the extent to which so many of our blessings are rooted in our privilege. It’s hard, hard work, but we’re being invited to do it in love.”

Christine Budzowski, president of the diocesan ECW, reported that the position of UTO coordinator is still open, and encouraged interested candidates to contact her at president@ecwlosangeles.org.

Secretary of Convention Steve Nishibayashi told council the annual diocesan convention will include the biennial Margaret Parker Lecture and will be held on Saturday, Nov. 13 in person at the Riverside Convention Center, with an option for synchronous remote attendance.

Convention delegates will need a smartphone, tablet or other web-connected device to vote. “We will not be passing out the voting devices, in order to save money and this will allow both in-person and remote voting,” said Nishibayashi. “If someone cannot have a web connected device, then reach out to Samantha Wylie, convention coordinator, or me. We do expect that we will have enough wifi service to be able to service all the voters.” (Contact the convention office at swylie@ladiocese.org or 213.482.2040, ext. 276.)

To conclude the convention, St. John’s Cathedral will host a diocese-wide Eucharist both in person and online on Sunday, Nov. 14.

Samantha Wylie, convention coordinator, reported that the virtual ministry fair continues with programs on stewardship, including a Saturday, July 24, 9 a.m. workshop to be presented in Spanish with simultaneous English translation.

Canon to the Ordinary Melissa McCarthy reported that St. Paul’s Commons is working on a reopening plan “and we’ve had a soft opening, with a couple of groups staying there recently.” She anticipates more groups meeting there in the fall.

Taylor reported that the first of three deanery meetings on the capital campaign was held July 15. Clergy and lay representatives from deaneries 1, 2, 5 and 6 met online to learn more about participating in the campaign, he said.

“We want everybody to hear about this,” Taylor said. “It’s exciting. It’s essential. It’s the work we’re going to do at this time.”

Council meets next online at 4 p.m. on Thursday, Sept. 9.