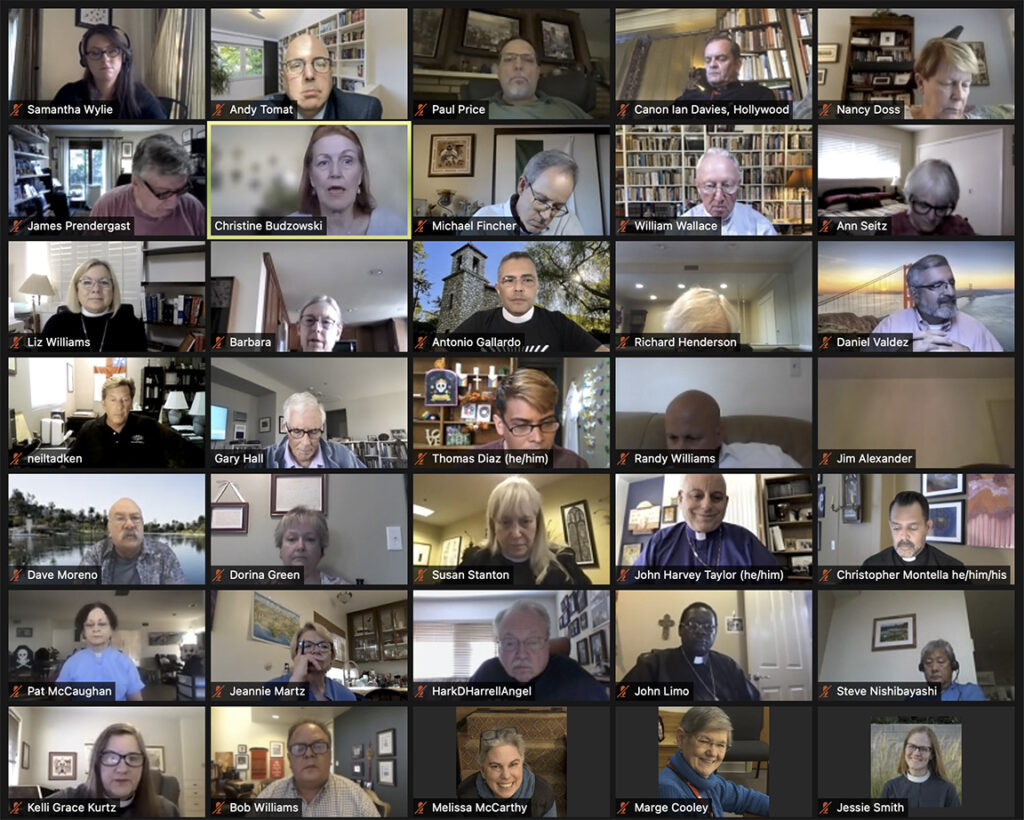 [The Episcopal News] Diocesan Council on Oct. 21 unanimously recommended presenting a $4.25 million proposed Mission Share Fund (MSF) budget for 2022 to delegates at the upcoming 126th annual meeting Nov. 13 of the Diocese of Los Angeles, planned both virtually and in-person at the Riverside Convention Center.

The MSF portion of the total $9.8 million budget is joined by $580,700 in annual income from the Bishop as a Corporation Sole (Corp Sole) and $5 million from the Corporation of the Diocese. The Corp Sole contribution is entirely funded by income, with no withdrawal of principal funds. Corporation of the Diocese funds come primarily from a combination of government and private grants, mostly for the diocese’s IRIS (refugee/immigration) and Seeds of Hope ministries.

The budget represents “for the first time a Mission Share Fund budget that was balanced without draining Corp Sole and Corporation of the Diocese resources; something that’s never been achieved in recent memory,” Canon Andy Tomat, diocesan treasurer, told council members.

Diocesan Bishop John Harvey Taylor called the budget vote historic, representing “the conclusion of three years of hard effort to really turn around the ship of the diocese. As long as I can remember, the budget has been balanced with a giant chunk of capital from either the Corporation of the Diocese or Corp Sole.”

The effort by the new Joint Budget Committee as supported the diocese’s director of finance, the Rev. Susan Stanton, and the finance office staff, has arrested a downward spiral of burning capital to balance the budget, Taylor said. “Today you have helped us find a new floor; you have passed a budget balanced down to the last dollar that does not burn any capital.”

Anticipation of the upcoming convention and diocesan finances dominated the meeting.

Tomat said the consolidated budget anticipates $4.25 million in 2022 MSF contributions from congregations. MSF income enables support of the ministries of local missions as well as the wider Episcopal Church and Christian formation. Canonically, parishes are required to give 12-15% of their net operating income to the MSF, while mission congregations are required to give 10% of their plate and pledge income.

Commitment to the Mission Share Fund has increased over the past several years; giving increased 4.8% in 2019 and 1.0% in 2020 despite the pandemic, Tomat said. Of the diocese’s 135 congregations, 100 returned signed pledges in 2021. Of the remaining 35 churches, all but three have continued to make MSF payments. All missions pay at the required level.

The MSF portion of the budget must be approved by Diocesan Convention. Corp Sole has approved spending $580,700 in annual income, but none of the principal, from restricted endowments and other bequests. The Corporation of the Diocese approved its $5 million portion earlier in the week.

On the spending side, the consolidated budget represents a $1.4 million reduction from the initial spending requests of ministries and social agencies at the start of the budget process.

While the plan does not include any staffing cuts, it defers hiring for canons for Youth and New Communities until the Fall of 2022.

The current health insurance program for diocesan employees is estimated to cost $795,000 for 2022. “Traditionally, our diocese has offset salaries that are lower than industry standards by offering premium insurance benefits, including 100% coverage for family members,” Tomat said. “The cost has become so exorbitant that we asked the bishop’s and finance offices to enter into dialogue with our colleagues about aligning the diocese’s salary and benefit structure with wider Episcopal Church benchmarks in 2023. Health care costs must be regularized to meet all our pastoral obligations.”

Taylor praised the work of Tomat, the Joint Budget Committee, Diocesan Council and the diocesan finance staff, adding in response to a question that the capital campaign, rooted in building a $30 to $40 million endowment, is vital. He also noted that capital campaigns tend to enhance, rather than compete with, annual congregational stewardship campaigns.

Reports from diocesan boards and committees

The Rev. Antonio Gallardo reported that the Corporation of the Diocese at its Oct. 19 meeting had approved its portion of the 2022 proposed budget. In other actions, directors also approved a license agreement for St. Anselm’s, Garden Grove. A report from CCS Fundraising, consultants for the capital campaign, included a conversation about creating an ongoing fund, like that established during the pandemic, to assist with congregational emergencies.

At its Sept. 22 meeting, the Standing Committee approved: requests for a capital project for Prince of Peace Church, Woodland Hills; a loan for Camp Stevens; and rebuilding a chapel at Holy Trinity-St. Benedict’s Church in Alhambra, according to the Very Rev. Gary Hall, Bloy House dean and Standing Committee liaison to Diocesan Council. The committee also voted to consent to the election of the Rev. Betsey Monnot as bishop of the Diocese of Iowa.

Christine Budzowski, ECW president, highlighted the work of United Thank Offering, one of a group of women’s ministries under the umbrella of the Episcopal Church Women. Other affiliates include Daughters of the King and Girls Friendly Society.

UTO–Los Angeles is seeking a new diocesan coordinator; the organization has a new website and has launched a 30-day “Gratitude Challenge” for November, along with a downloadable booklet to guide the effort.

“Hopefully at the end, when you’ve participated and done all the activities you will look back in gratitude for everything you’ve been blessed with, and you will write a check to UTO in gratitude,” Budzowski said.

Anyone interested in the UTO coordinator position, or in serving as UTO coordinator for a parish or mission of the diocese may contact Budzowski at 310.948.0056 or president@ecwlosangeles.org.

The Rev. Canon Kelli Grace Kurtz reported that the Program Group on Mission Congregations will recommend $1.1 million in development fund grants for mission congregations to Bishop Taylor as part of the yearly diocesan budget process.

Kurtz, chair of the committee, said that 27 of the diocese’s 37 mission congregations requested 2022 grants ranging from $15,000 to $99,998, and averaging about $35,000. The grants are meant to assist mission congregations with normal operating expenditures, and ensuring clergy are adequately compensated. They are not meant to fund legacy debt or maintenance.

“We were aware of two unique challenges this year; the financial realities of the diocese as a whole, and the stress of Covid-19 and the economic realities of it that have hit some of our mission congregations hard,” said Kurtz, who added that the program group prays for each congregation during deliberations. “We also had one new congregation included in the grant process.”

On Oct. 16, the Los Angeles deputation to the 80th General Convention of the Episcopal Church, to be held July 7 –14 in Baltimore – along with deputies from California’s five other dioceses – met virtually with President of the House of Deputies Gay Clark Jennings, according to Thomas Diaz, alternate deputy and liaison to council.

The meeting highlighted the report of The Episcopal Church’s Task Force on Creation Care and Environmental Racism, in anticipation of General Convention, which was postponed from 2021 because of the pandemic.

Three Southland Episcopalians are members of the Joint Nominating Committee for the Election of the Presiding Bishop: Secretary of Convention Canon Steven Nishibayashi; the Rev. Antonio Gallardo, vicar of St. Luke’s, La Crescenta; and Thomas Diaz of All Saints, Pasadena.

In anticipation of the Nov. 13 Diocesan Convention, themed “Truth and Love,” Nishibayashi reported that deaneries need to make sure they appoint youth delegates for the one-day hybrid gathering. Delegates participating virtually will need internet-connected devices to vote, while voting machines will be distributed to those in-person at the Riverside Convention Center.

Three pre-convention deanery assemblies are to be held virtually, with individual deaneries scheduling their own business meetings.

Registration opens at 7:30 a.m. for Diocesan Convention on Saturday, Nov. 13 at the Riverside Convention Center. Bishop Taylor will call the meeting to order at 9 a.m. The meeting will conclude with Eucharist, ending by 6 p.m.

Canon to the Ordinary Melissa McCarthy reported that regular office hours have resumed at St. Paul’s Commons. She has been selected as a delegate to the virtual United Nations Climate Change Conference, planned from Oct. 31 through Nov. 12. Organizational work has started; daily meetings begin at 2 a.m. Pacific time.

She also reported that environmental advocate Mary Nichols, chair of the California Air Resources Board and the Margaret Parker lecturer Nov. 13 at diocesan convention, will also be a presenter at the climate change conference.

Taylor told council members that the three ways to be stewards of the diocese involve “bequeathing it to the saints to come. This is our primary work … for the future.”

The council’s proactive role has been enormous, he added, including input in the budget process, and employing MSF missionaries to offer support and counseling to congregations with lagging pledges.

Additionally, the Corporation of the Diocese is evolving into a more active and strategic body, with directors behaving “like modern nonprofits whose responsibility is to clear the way for all of you, for all of the churches, to remove the burden of financial anxiety, so you can do your ministries,” Taylor said.

The third piece is the capital campaign, which aims “to form the leaders that the church needs in the 21st century. And that’s going to take the work of all of us.”

Bishops’ visits – in the wake of the Nov. 13 departure of Bishop Suffragan Diane M. Jardine Bruce, whose nomination as provisional bishop of the Diocese of West Missouri is expected to be ratified at their Nov. 6 diocesan convention – have been covered, Taylor said.

Former Presiding Bishop Katharine Jefferts Schori, and retired bishops Franklin Brookhart of Montana and Ed Little of Northern Indiana will assist with episcopal visitations, he said. “It will be the work of many hands and hearts to build on the mission and ministry of Bishop Diane M Jardine Bruce, who is being called by the Holy Spirit to West Missouri.”

Canon for Common Life Bob Williams reported that a memorial service for Canon Barbara Borsch is planned for Saturday, Oct. 30 at 11 a.m. at St. Martin in-the-Fields Church in the Chestnut Hill neighborhood of Philadelphia, where she had been living. Details for a West Coast remembrance of the ministries of both former Bishop Diocesan Fred and Barbara Borsch will be announced as soon as they become available.

Williams also reported that The Episcopal News plans to raise funds through digital advertising sales. A new landing page for the weekly online publication will debut prior to Nov. 13, initially featuring complimentary ads for convention exhibitors.

In his role as diocesan historiographer, Williams also cited the proximity of the former location of St. Athanasius Church to the Chinese Massacre of 1871, featured in an Oct. 23 online event hosted by The Gathering. The massacre has been considered the worst mass lynching in U.S. history – 19 Chinese immigrants were shot and killed, including 15 who were hung by an angry mob after being shot.

Financial services professional Dan Valdez, board chair of the Episcopal Community Federal Credit Union, reported that the credit union is assisting the Interfaith Refugee and Immigration Service’s efforts to resettle Afghan refugees, opening accounts for them after other financial institutions turned them away.