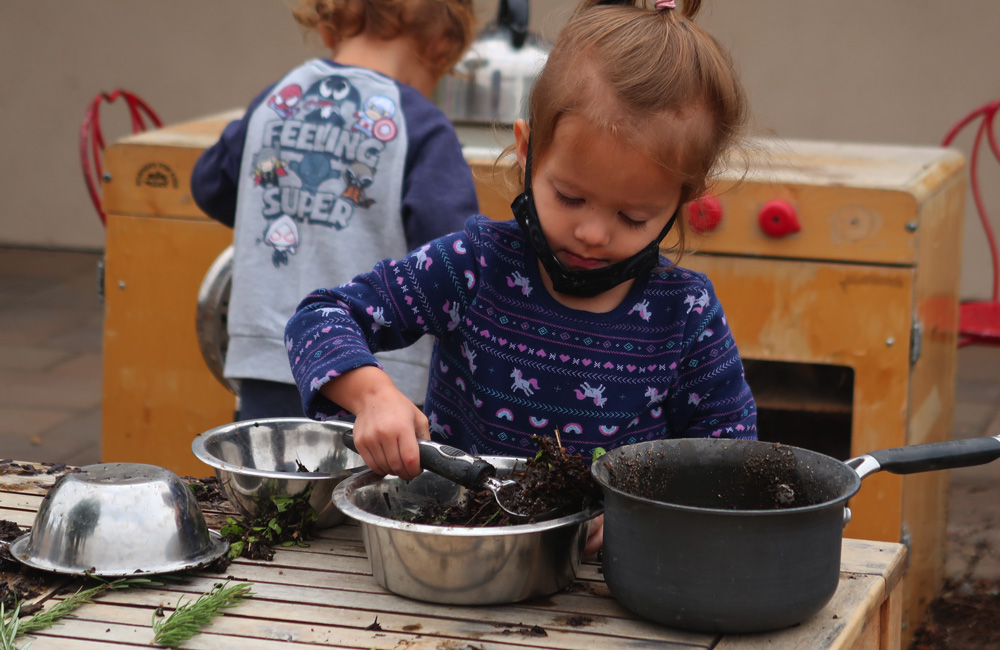 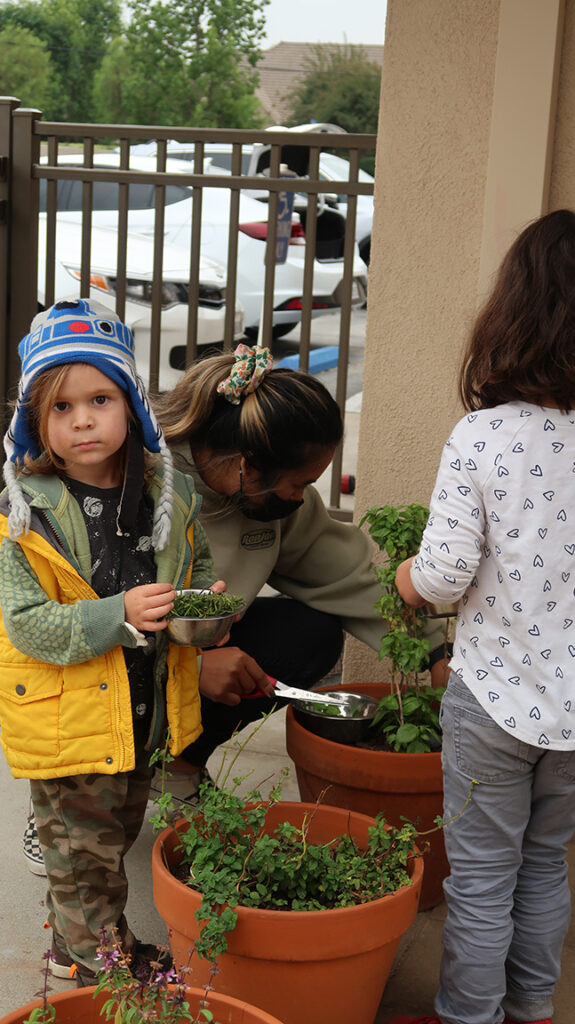 Children help a teacher harvest herbs from a container garden at the preschool. Photo: Janet Kawamoto

[The Episcopal News] Natural elements such as dirt, rosemary and other freshly clipped garden herbs, seashells, wood, fabric – even bugs, lizards and the preschoolers ages 2 to 5 themselves – are all part of the educational experience of the Discovery Gardens Environmental Early Learning Center, located at Emmanuel Church in Fullerton.

The student-centered, nature-based school opened August 16, 2021, and uses a Reggio Emilia-inspired approach, an organic process of following children’s questions and natural curiosity as a guide to crafting lessons to invite their learning “instead of it coming from the top down,” director Tim Bongco said in a recent interview.

“We believe children come in with a skill set or knowledge that’s already preexisting and, through careful observation, through planning and reflection, teachers build off the skill set that the children already have,” he said in the school’s outdoor classroom, pausing to adjust 3-year-old Kiyan’s face mask.

All are reasons Jingky Clementir sends her 5-year-old daughter Maya to Discovery Gardens.

“Maya’s been with the school since it opened,” Clementir, a teacher, told The Episcopal News in a telephone interview. “The Reggio-inspired curriculum is something I wanted for Maya because she enjoys art and that’s one of the core aspects of the curriculum. I also enjoy the constructivist approach, where not only do they use natural materials to encourage creativity and imagination, but to also help with her cognitive abilities.” 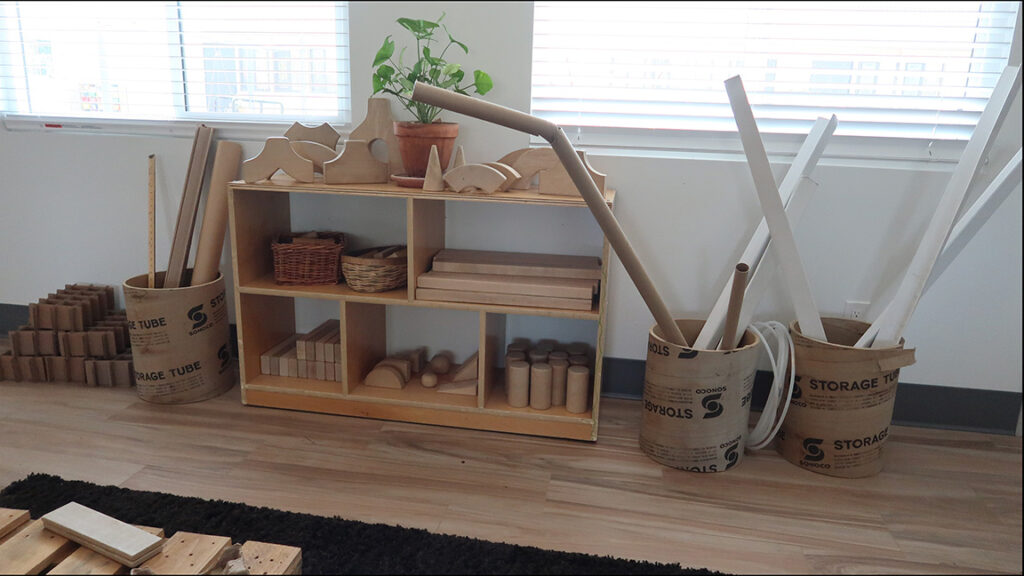 Indoors and out, Discovery Gardens is equipped as much as possible with playthings made from natural materials. Photo: Janet Kawamoto

The approach was developed by parents and educators in villages in the Reggio Emilia region of Italy post-World War II, and assumes children are endowed with many symbolic “languages,” such as art, music, painting, sculpting, drama, with which they express themselves. The curriculum emphasizes principles of respect, responsibility, and community, through exploration, discovery, and play.

Children are encouraged to share their thoughts and ideas about everyone they meet or everything they do during the day, playing an active role in their own educational process, exploring, observing, hypothesizing, questioning, and discussing to clarify understandings, according to Bongco.

The Rev. Holly Cardone, Emmanuel Church’s rector and the school director, said even her dog gets into the act: “I bring Roxy to campus because the kids love to play with her.” 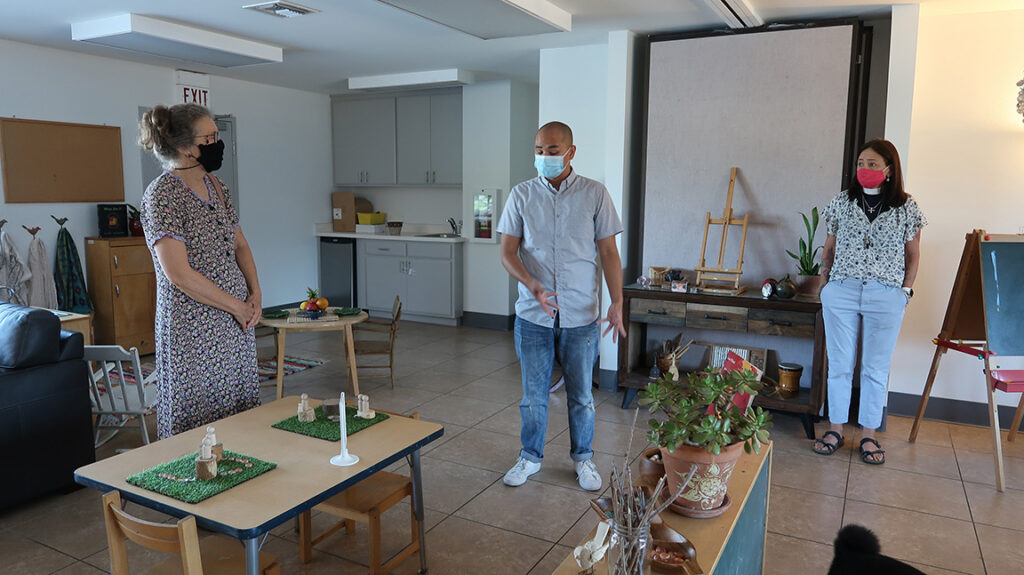 When Cardone recognized the need to re-imagine the church’s preschool, she turned to the Social Enterprise Academy, an initiative of Episcopal Enterprises, which formed in 2017, as an offering of the Diocese of Los Angeles to support creative efforts for congregations and communities to achieve sustainability.

“We had a preschool that was just limping along before COVID and was not doing well,” she recalled. “We wanted to start over, to go forward and re-imagine it, but we had no idea how to do that.”

The academy, co-led by the Rev. Canon Jaime Edwards-Acton and Betsy Densmore, guides congregations as they build bridges with and learn about the real needs within their surrounding communities. Participants are also coached and mentored in developing business and marketing plans, Edwards-Acton said. 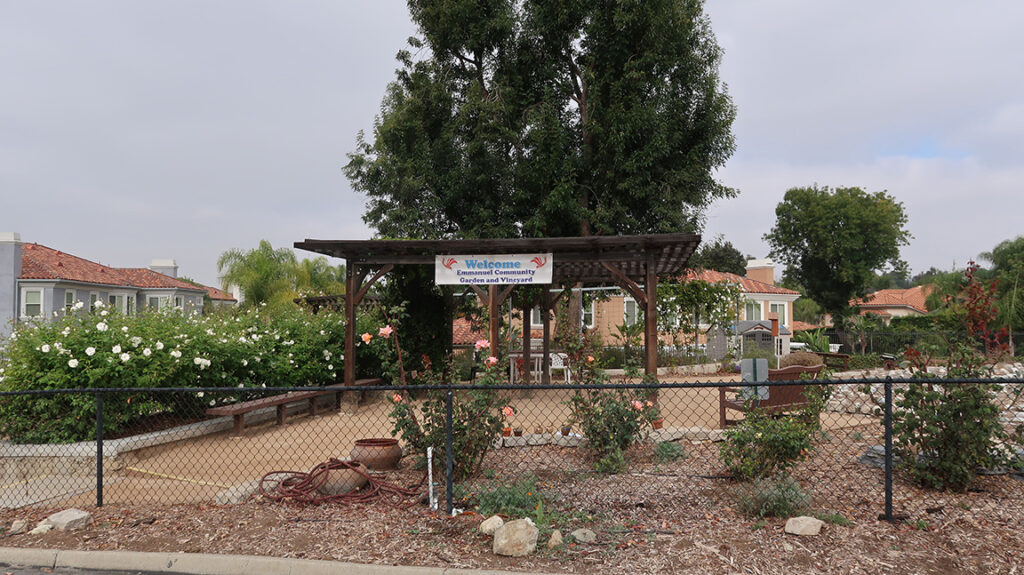 An area for preschool students to dig and grow is set aside at Emmanuel’s long-established community garden, pictured in late August. Photo: Janet Kawamoto

Emmanuel “discovered that families always need childcare and many families within their area have environmental values,” Edwards-Acton told the News. “They assessed their resources (they already had a building for the school, lots of garden space, and childcare professionals as parishioners or friends of parishioners.) They also had a team of parishioners willing to usher the process along, talk about with others and roll up their sleeves. In the end, they came up with the idea of a preschool based on environmental values.”

Chris Becerra was one of those parishioners. He teaches in Fullerton College’s early childhood department and owns a consulting firm specializing in early childhood projects. He was eager to help, Cardone recalled.

“When we came to Chris with our ideas and enthusiasm to re-open our preschool program after a year of closure, he took what we brought him and opened our eyes to the possibilities of what a great early learning center program might look like in our context.”

Becerra assisted with recruitment and training, marketing, student enrollment and curriculum development, according to his website. 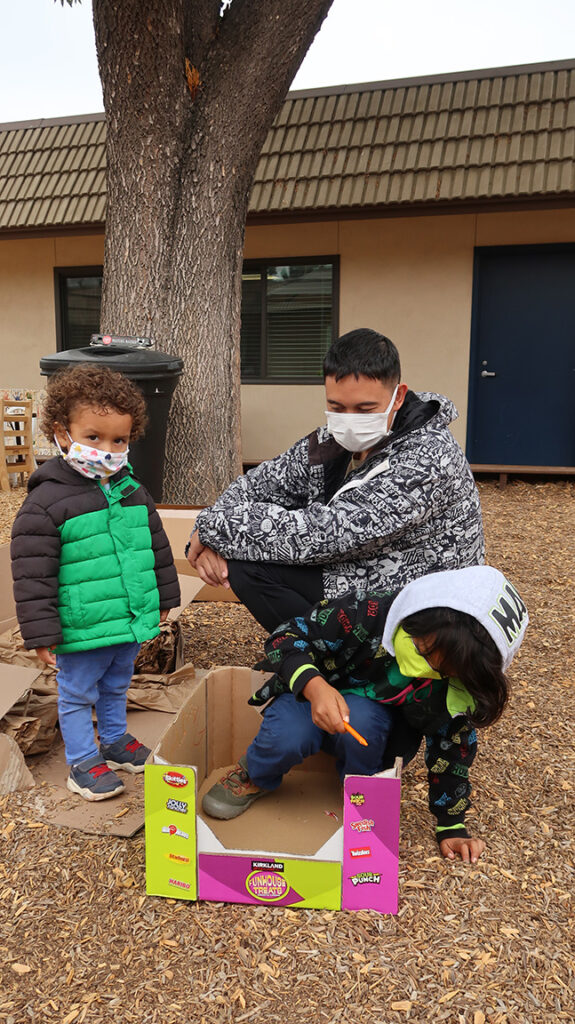 Preschool teacher Robert Waworuntu supervises as children pretend a cardboard box is a boat or plane or spaceship – or just a place to sit. Photo: Janet Kawamoto

“We feel the whole emphasis on the environment and creativity and organic play, and Chris’s input and direction was just so led by the Holy Spirit, because God gives us what we need when we need it if we keep our eyes and ears open for it,” Cardone said. Currently, 25 families have enrolled children, and there is a waiting list of students eager to attend once they turn 2 years old, the minimum age allowed, Bongco said.

Nikki Fivecoat lives in the church’s neighboring community. Recognizing the tremendous effort invested in reimagining the preschool, she enrolled her son, Rayan, 5, who had attended the former school.

Now, “I’ve noticed that the children are outdoors a lot more than before,” she said. “The natural environment is a stimulating one. There isn’t as much plastic and clutter. I see the kids running around and exploring; there’s not a lot of table-talk activities. The kids are totally engaged, mind, body, and spirit.”

She said the teaching staff of four, along with Bongco, have created wonderful partnerships with parents and families, another of the school’s core values.

“They have been extremely kind,” Fivecoat said. “My son has multiple food allergies, and they have been extremely considerate in ensuring his safety. They are looking out for the best interests of the kids they’re taking care of,” so much so that she plans to enroll her 19-month-old, Bodhi, as soon as he is age-eligible, she said.

“We just feel very fortunate to be part of such a diverse community and have Rayan be able to attend a school that allows him to learn in a way all children should learn, by exploring and being connected to their environment.

“Nature’s so important,” she added. “It’s especially important as we’re finally talking about this climate crisis. To be able to say to the kids, let’s get your hands into the earth, you can help grow things, and see the process of life in nature is extremely important. It’s also important that this is the way they integrate so many learning components.”

A child examines an apricot sapling to be rooted in one of the preschool’s several planter boxes. Photo: Janet Kawamoto

Three indoor classrooms offer a variety of natural materials for student learning and spaces for storytelling, play, arts and crafts – even STEM-related exercises – but many activities happen outdoors, which Bongco considers “like an artist’s canvas and the perfect antidote for young children who’ve primarily been closed up inside their homes during the COVID-19 pandemic.”

“We pride ourselves on providing an inclusive environment for children to wonder, create, and explore,” Bongco said. Nature offers opportunities for problem-solving, critical thinking, cognitive and language development, and STEM-based learning, he added.

Bongco, who built some of the preschool’s outdoor structures and was instrumental in designing its program, recently resigned as director to move on to other projects. The parish has hired Cynthia Greenspan as interim director.

On this particular day, Lucas, 3, rides a multi-colored tricycle around the outdoor classroom, stopping at times to immerse his hands in a dirt-filled sensory tub where “such critters as bugs, lizards and other insects” become part of a living laboratory, said Bongco, who also teaches in Fullerton College’s early childhood education department.

Playing in the dirt also offers tactile stimulation and preparation for student trips to the community garden, where “they learn about and clip fresh herbs.”

Across the campus, 3-year-olds Ella and Rory are incorporating the rosemary sprigs into a mudpie-making and menu-planning activity. Using pots and pans and “real” garden tools and kitchen utensils, not plastic lookalikes, as classroom materials, their imaginary meal consists of a dessert soup for which they intend to charge lead teacher Molly Sisanachandeng $16, they tell her.

After lightheartedly protesting the high price, Sisanachandeng said the exercise helps to trigger students’ creative juices. “Here, the children are able to explore in their own ways with our guidance,” she said. “We’re not pushing a lot of our ideas onto them. They get to decide what they would like to work with, what they’re interested in and what they want to explore.” 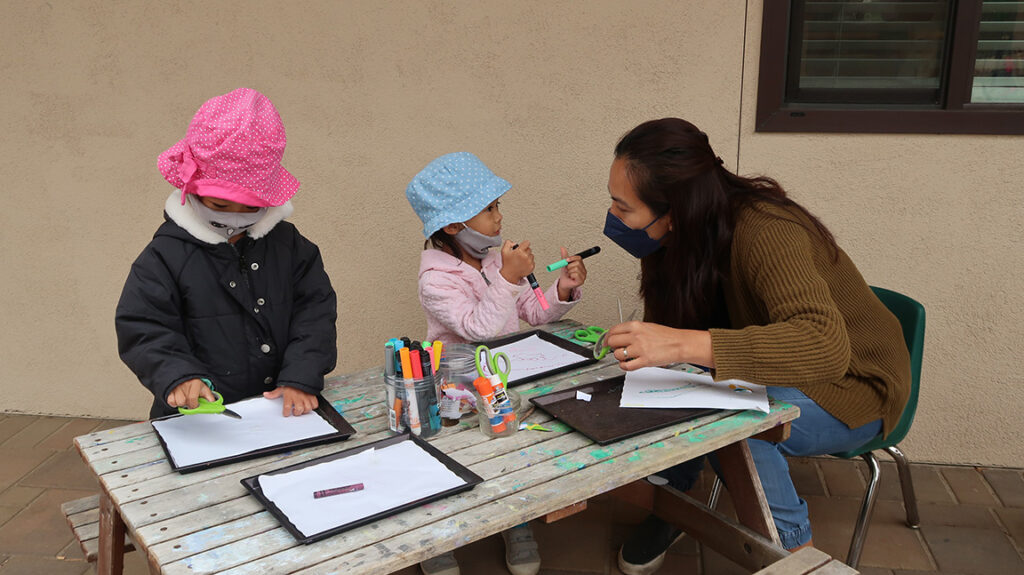 Nearby, Nicholas, 3, shows teacher Ratsana Thampi “a letter for my mom” at the outdoor writing center. There, another cluster of children create drawings and other art projects, using multi-colored paper and markers, glue sticks, stickers, glitter, letter cutouts, and other materials.

“The children learn from seeing and doing,” Thampi said. “They are able to explore in their own way, and they don’t hold back. They keep us on our toes with their questions and concerns. We provide them with materials so they can draw on some of the letters to make here and there. They start here but, they can also just kind of float around to wherever they want to go.”

Still others are gathered at a multi-colored play structure where a teachable moment is underway. Teacher Robert Waworuntu negotiates a real-time application of the principles of community and sharing, and of problem-solving as the children take turns at a miniature piano.

“We supervise, but we also offer the freedom to let the children make their own choices,” he said.