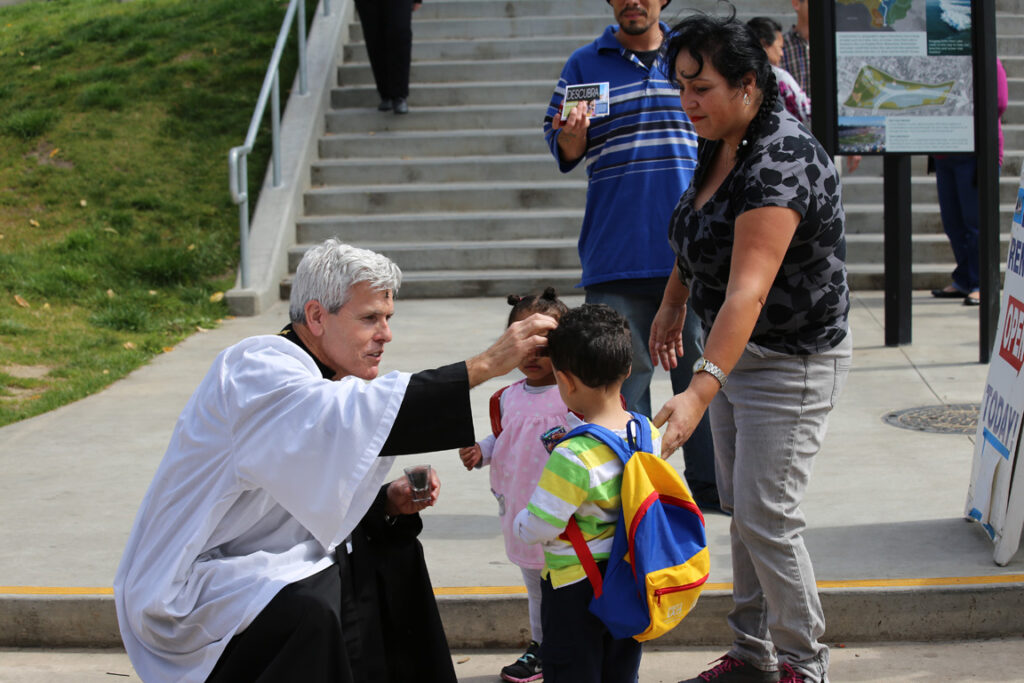 [The Episcopal News] The Rev. Canon Frank Alton, 70, who retires May 1 as vicar of St. Athanasius Church in Echo Park, says initially he’ll spend some time traveling and writing, and then he’ll be back to serve the church, especially in Spanish-language congregations.

“There is a lack of bilingual or Spanish-speaking clergy to serve as supply clergy. That’s something I want to help with,” Alton told The Episcopal News recently.

“Frank is such a gifted, loving priest,” said Bishop John Harvey Taylor. “As provost of the Cathedral Center of St. Paul, now St. Paul’s Commons, he has essentially been the rector of Echo Park, supporting and encouraging all of its denizens, especially food- and housing-insecure neighbors. We, and they, will miss him as a pastor, advocate, and friend.”

A Los Angeles native and former Presbyterian pastor, Alton has spent more than four decades in ministry. A graduate of what is now Harvard Westlake School, he laughingly recalled being drawn to The Episcopal Church at 14 when his parents left the Methodist Church.

“My parents didn’t think the youth group at the Methodist Church was strong enough for us,” he said. “They gave us each an opportunity to choose another church. I chose St. Alban’s, Westwood. We went one Sunday, and the rest of the family went, ‘Nope.’”

Eventually, he returned to The Episcopal Church after living and serving in Colombia and Costa Rica, where he learned Spanish and got married before moving to Pasadena. A graduate of Fuller Seminary, he was ordained a Presbyterian pastor at age 26 in 1978, he and his wife had a baby, and life seemed perfect.

“Then in the summer of 1980, my wife, Herminia, got cancer, thyroid cancer, while she was pregnant with our second child. The doctors said to wait to treat it until the second trimester, because thyroid cancer isn’t too bad.”

One day post-surgery, they learned the truth: “The doctor met me in the lobby of the hospital, and said, ‘She’s got three to six months. She’ll need chemotherapy.’ And my great life fell apart. They took the baby,” he said, his voice cracking with emotion. 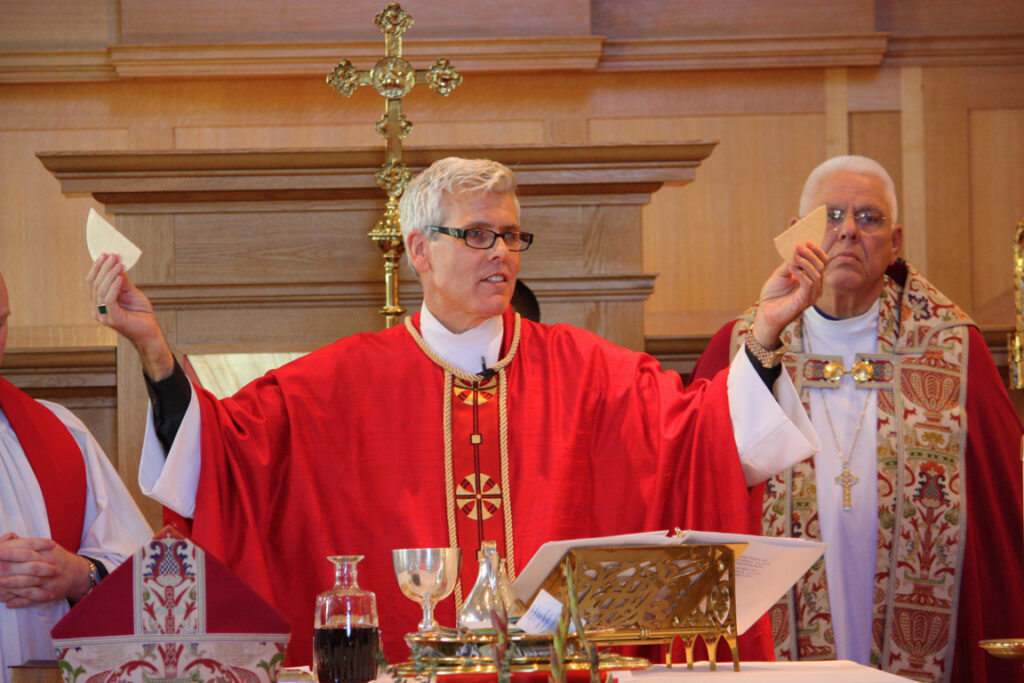 In spite of her illness, the couple continued to travel with church mission groups; to Kenya, Uganda, and South Africa, where Herminia underwent surgery to remove a brain tumor after the cancer spread. In Pretoria, they stayed with friends, the Rev. Nico and Ellen Smith, the only white couple legally living in Mamelodi, a Black township. Smith, a minister in the Mamelodi Dutch Reformed Church, had received permission from the government to move there.

Smith had himself had undergone a conversion experience, Alton said. Born into an Afrikaner nationalist family, he had been a member of the Broederbond, a secret organization founded in 1912 to promote Afrikaner interests and exert political control, which Alton likens to the Ku Klux Klan in the United States.

“He came into the hospital room and said to me, ‘You need a pastor. Would you like to come home with me?’ I stayed there almost a month while Herminia was recovering,” Alton recalled. “He was getting threatening phone calls almost every night because the whites were absolutely furious at him for abandoning them. He was pastoring to me, and he was pastoring the whole country. That affected my understanding of what it means to be a pastor.”

After Herminia’s death in 1983, Alton, an associate pastor for mission and evangelism at Bel Air Presbyterian Church in Los Angeles, spent sabbatical time in Peru, living and serving “in a squatter community. I had the opportunity to be a pastor and to transport a lot of refugees to the church to sleep before they went off to where they were being resettled.”

Inspired by that ministry, he moved to Mexico where he served as coordinator of the Mexican Association for Rural and Urban Transformation. “We had health programs and educational programs, community banking; we worked with our neighbors. 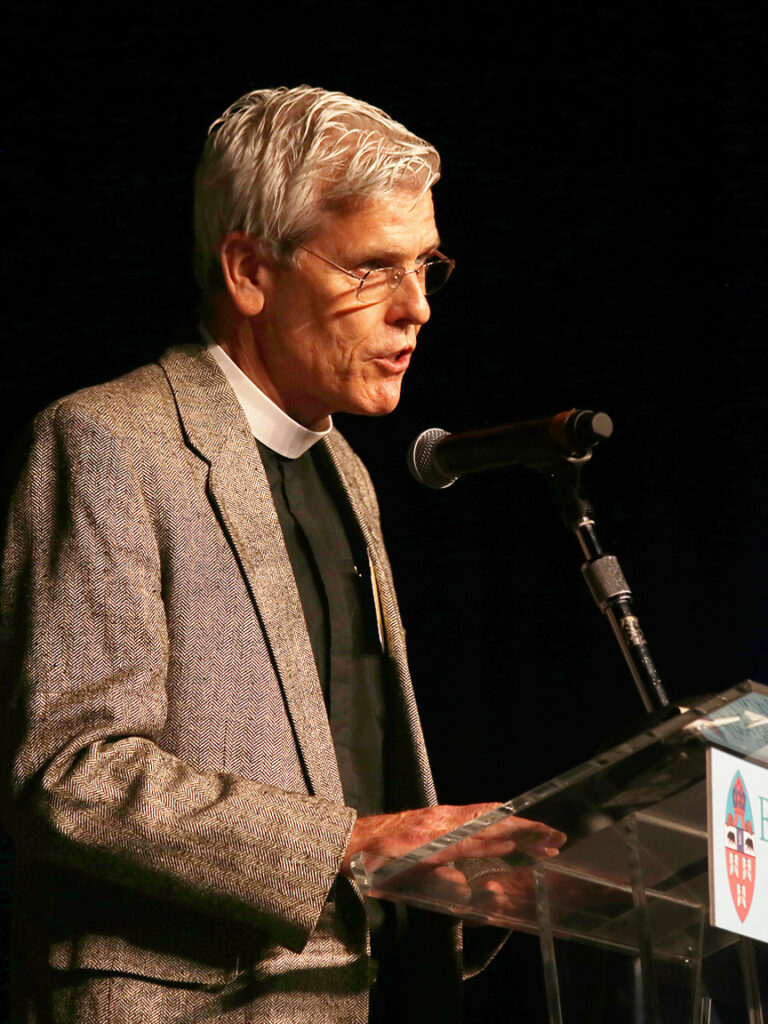 Alton reports to Diocesan Convention as a member of the Episcopal Church delegation to the 2016 Parliament of World Religions. Photo: Alysha Kawamoto

“I also led a house church in one of the squatter homes for several years,” he recalled. Remarried, he and his wife, Judy, adopted two children. (The couple later divorced.) He taught theology, ecumenism, urban mission, New Testament, ethics, and other subjects at the Seminario Presbiteriano de Mexico.

Alton also co-founded and served as executive director of Partners in Hope, which connected
U.S. churches with marginal communities through travel seminars.

Returning to Los Angeles in 1995, he served as pastor of Immanuel Presbyterian Church, where “we were very involved in immigration work, housing, and other projects. I started a Spanish ministry there. It became a model for an urban cathedral church that did social justice work.” The church was also active in the Sanctuary Movement, providing protection for a Guatemalan woman and her daughter, who lived at Immanuel for six years.

“I also came out as a gay man,” Alton said. He remained at Immanuel for a couple more years, eventually transitioning to The Episcopal Church, and began attending Holy Spirit, Silver Lake and All Saints, Pasadena before entering discernment for ordination.

Gerry Puhara was on Alton’s discernment committee at All Saints and the two remain close friends. “Frank is not somebody who hides anything,” she said. “We were all really impressed that he had spent so much time living in marginal communities.

“I remember him telling us that he lived in one community where he thought, ‘I’m going to help these poor people,’ and yet he felt he got so much more from them, particularly their deep sense of community with one another, and helping one another, and that really jelled for him about the kind of ministry he wanted to have.” 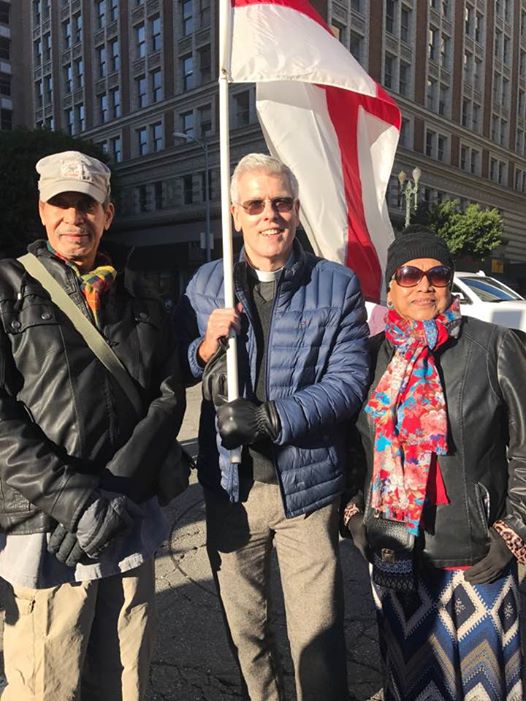 Grant Power has been friends with Alton since the 1980s and now attends St. Athanasius and has served as a vestry member and warden. “I joined the church, partly because Frank was there,” he said. “I knew him as a person of great integrity and great faith and pastoral gifts, someone with extraordinary ability when it comes to biblical exegesis … a kind of modern-day Karl Barth, with the bible in one hand and a newspaper in the other,” connecting Scripture with ongoing world events.

Alton is “humble, warm, generous, and inspiring as an example of what it means to live by faith and to be a person who is serious about growing spiritually and becoming spiritually mature,” Power added.

Amanda Vasquez-Alcazar also attends St. Athanasius and serves as a warden. Alton is an outstanding pastor, she said.

“We will really miss him. He’s really been so in touch with me since my husband Ramiro passed away last May. My family received huge support from him.”

Even while on Covid lockdown, Alton performed drive-by pastoral care, she said. “Even during the pandemic, he visited everyone, waving to them from his car, checking to make sure we’re all right. He deserves the best.”

“The Rev. Frank Alton has been a wonderful colleague and friend to all of us at St. Paul’s Commons,” said Canon to the Ordinary Melissa McCarthy, who is chief of diocesan staff. “His transformative leadership will long be remembered at St. Athanasius. He has been a generous, compassionate, and visionary priest and pastor. We will miss him!”

Alton has also served as executive director of Prepare the Future California; and as provost of the Cathedral Center of St. Paul and St. Paul’s Commons before being named vicar of St. Athanasius. Alton and Saul Renteria married in 2014.

He was named an honorary canon of the diocese in 2016 and received the Clergy and Laity United for Economic Justice “Giants of Justice Award,” in 2008, for his support of hotel workers while he was at Immanuel.

After the Wilshire Plaza Hotel owner unilaterally terminated worker contracts and reduced their salaries to just above minimum wage, “the church took their Ash Wednesday service and their parishioners to the front of the Wilshire Plaza Hotel. They accompanied workers to sustain their fight until they succeeded in securing justice through the legal system.” 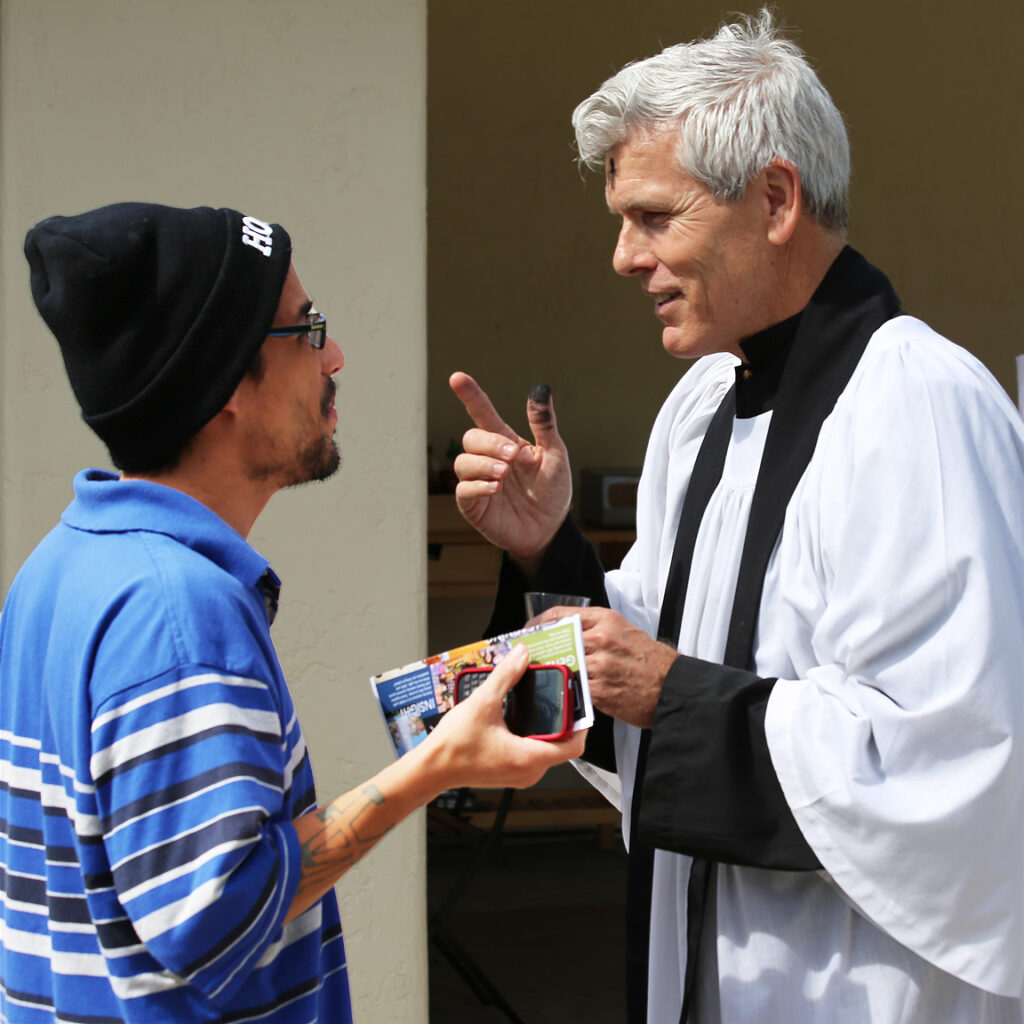 Alton converses with an Echo Park neighborhood resident during an “ashes to go” event on Ash Wednesday in 2014. Photo: Janet Kawamoto

Alton has received numerous awards for his work among the Central American immigrant community and has served on a host of community boards and organizations, including CLUE, Progressive Christians Uniting and the Los Angeles Leadership Academy. He has also served on such diocesan bodies as the Bishop’s Task Force on Housing, the Program Group for Ecumenical and Interreligious Life, and many, many more.

A 1973 graduate of Pomona College, he earned a doctor of ministry degree from Fuller Seminary in Pasadena in June 1985.

Now a great-grandfather, he believes “my life’s been a journey toward the ‘both/and.’ I think I did a lot of living the either/or and that led to living in secret and hiding, especially my sexuality, for a long time. Along the way, it’s given me a perspective of grace and growth, and that I don’t have to have it all together, or to be perfect to make a difference.

“Every step I’ve taken toward a both/and view of life has really helped me move away from perfectionism and understand that mistakes are means of grace, of growth, for myself and others, about not judging either myself or others too harshly.”