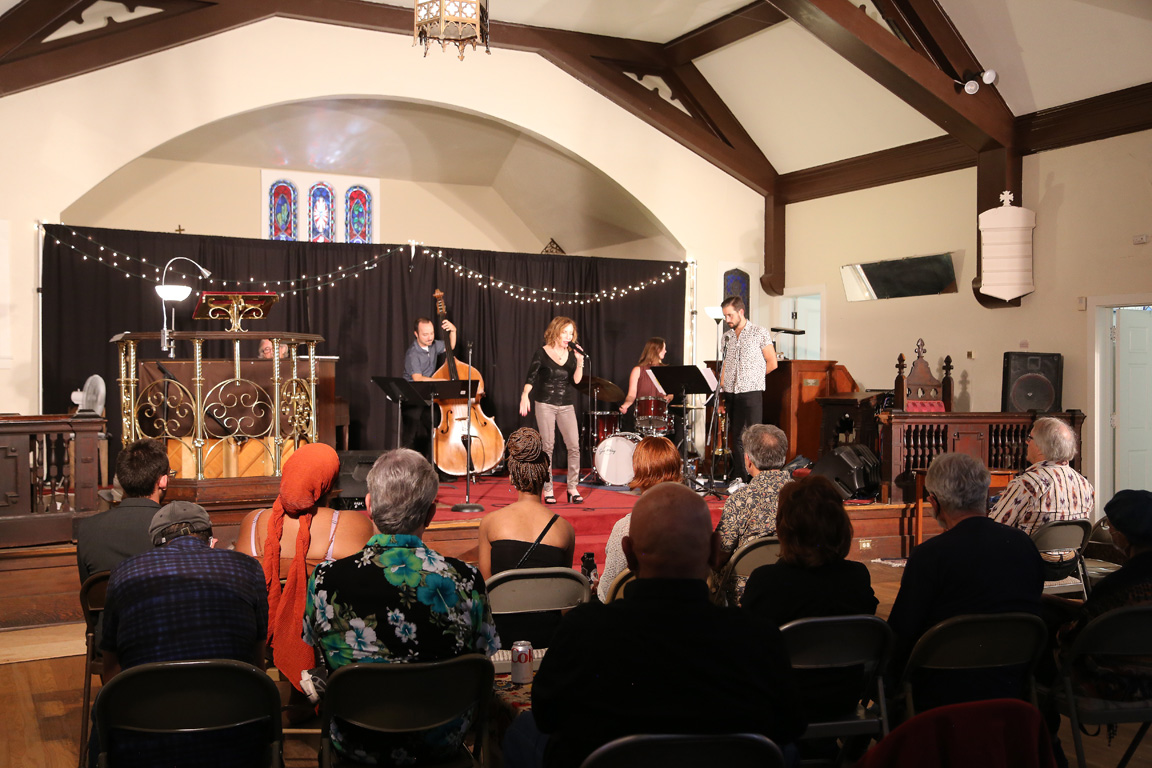 The Judy Wexler Quintet performs Aug. 27 at The Harmony Room at St. Be’s, an Episcopal Church community in Eagle Rock. The chancel of the former St. Barnabas’ Church was converted to a stage; an electrician-parishioner installed extra stage lighting, and pews were replaced with folding chairs in the nave to create the popular performance space. Photo: Janet Kawamoto 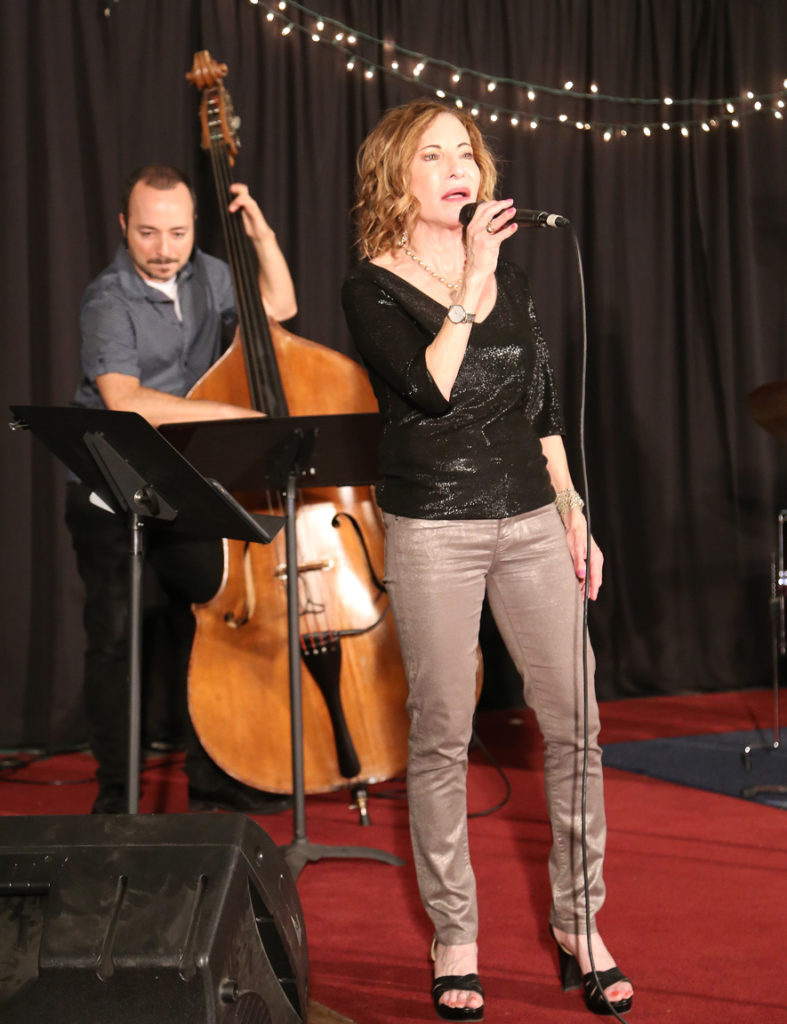 During a 90-minute set featuring golden oldies such as Bob Dylan’s “The Times, They are A’Changin” and “Up on the Roof,” popularized by the Drifters, she recalled sharing publicity advice with Edwards-Acton in 2019 as he reimagined a shuttered St. Barnabas Church.

St. Barnabas, founded as a mission in 1923, closed to official worship in 2018. But Bishop John Harvey Taylor, along with Edwards-Acton, who is also the rector of St. Stephen’s Church in Hollywood and executive director of the Jubilee Consortium, had a vision for using the space.

Since a September 2019 grand re-opening celebration, it has grown into St. Be’s, a music-centric, joyous “love offering to the community,” including a preschool that serves 62 families, a community garden, a food distribution site that serves 400 families weekly and a center for the University of California Master Gardener program.

The preschool opened in 2021 with 33 families and has nearly doubled in size; Edwards-Acton serves as the head of school. Classes also meet in the sanctuary. It is modeled after its 20-year-old counterpart, the Delaney Wright Fine Arts Preschool at St. Stephen’s, Edwards-Acton said.

In 2000 Edwards-Acton had founded and continues to serve as executive director of the Jubilee Consortium, a collaboration of Episcopal churches providing leadership and enrichment programs to local communities.

As news of The Harmony Room quickly spread by word of mouth and through social media, Wexler contacted Edwards-Acton, eager to perform, their previous conversation forgotten. “I said, ‘hey, it’s me, Judy,’” Edwards-Acton recalled, amid audience laughter and applause.

“My passion is for trying to do things that are meaningful, but not necessarily so churchy,” Edwards-Acton told The Episcopal News. “My first instincts are not to start a worship space; they are to start a food distribution program, especially since Covid.”

The vision is expansive, with Edwards-Acton replicating a model crafted during his 23 years as St. Stephen’s rector. Bilingual bible study is held at 6:30 p.m. on Thursdays at St. Be’s and on fourth Thursdays, “we do a meal and are learning about food,” he said.

The sessions have included how to preserve food safely, and to make kombucha and sourdough bread. “We’re going to learn how to dehydrate food; to make sundried tomatoes, and fruit and vegetable snacks. We make it on Thursday and enjoy it the following week with our supper,” said Edwards-Acton.

Plans are also in the works to add 5 p.m. Sunday Spanish and English worship after Labor Day.

“I just started with, what are the needs here? How might we be meaningful to the community? Obviously, music is a need. The passion I have is how do we make that happen in some way that doesn’t have to be a church service but can be church for somebody.” 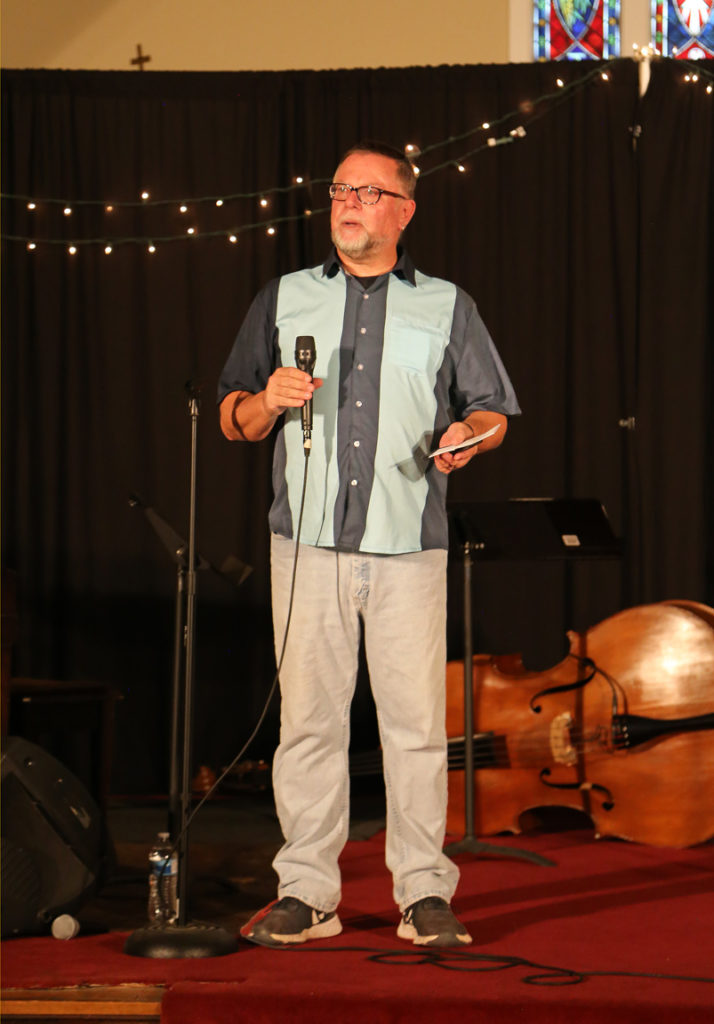 A musician himself, Edwards-Acton recognized both a need and an opportunity created during the pandemic – the community longed for music and with venues closed, local musicians were hungry to perform.

“I had this idea of regular live music as another way for the church to be present to the community in a non-proselytizing kind of way,” he said.

St. Be’s invited live bands and created a sidewalk venue, positioning chairs on either side of the church’s Chickasaw Avenue location. “We put out a table with snacks and waters. People in the neighborhood would come and sit on their porches or in the chairs. People stopped in their cars and rolled the windows down. We did that about once a month.”

As the pandemic retreated and indoor venues were accessible, the chancel was converted to a stage; an electrician-parishioner installed extra stage lighting, pews were replaced with folding chairs in the nave, which also doubles as a preschool classroom. For Harmony Room student workstations are covered with tablecloths and flameless candles; snacks are available for a donation.

The venue has hosted an eclectic variety of performers, including Justo Almario, the La Choro Club, Bodhisattva, and the Will Brahm Duo. Cover charge is $15 with musicians receiving the proceeds, while donations for food are retained by the church, Edward-Acton said.

Colombian-born, Los Angeles-based Justo Almario, a flutist, saxophonist and Latin jazz group leader, drew Gabriel and Carmen Faustillo to St. Be’s for an Aug. 13 performance and the San Gabriel couple have been regulars ever since, they said.

“We like to sit right up front. This is a relaxed, intimate setting,” said Gabriel Faustillo. “There are no reservations needed. We love watching live shows in intimate settings, and Rev. Jaime is very warm.”

“I’m more partial to jazz, but I love the variety of musicians who perform here,” said Chambers, the son of Paul Chambers, jazz bassist for Miles Davis and John Coltrane. “The acoustics here are so tight, so wonderful. I love being in the environment of live music, and creative, spiritual people, and the caliber of musicians Rev. Jaime is bringing. He’s created a wonderful space here in Eagle Rock.”

Don Rice, another St. Stephen’s member and musician, agreed. “As a vocal performer, it’s our kind of thing.” Noting that while Wexler performed the music of other artists, “she made it her own,” he said.

“It’s like The Episcopal Church. It’s inclusive and unique – it’s not about banging people over the head with theology,” he said. “It’s welcoming; tonight I saw people who were just walking by, stop and come in to enjoy the performance.”

The Harmony Room has become a centering space for Abigail Marsters, who moved to Eagle Rock from Boston a year ago and said she has found both friends and excellent entertainment there.

“I thought it’d be easy in L.A. to find informal musical places, our kind of vibe, but it’s been hard to find,” she said. “There’s a great diversity of music here; it’s been really nice.”

Canon Andy Tomat, diocesan treasurer and the son of a music educator, said he appreciates St. Be’s as a space for both artists and audience.

“It is providing a venue for artists to have an audience, and for us in the audience to experience some of the great talents in the community.”

St. Be’s is “a good example of how to really renew a church that’s gone through transition, closed and reopened, to being a presence in the community,” he said, adding that income from the preschool is helping to sustain the community. 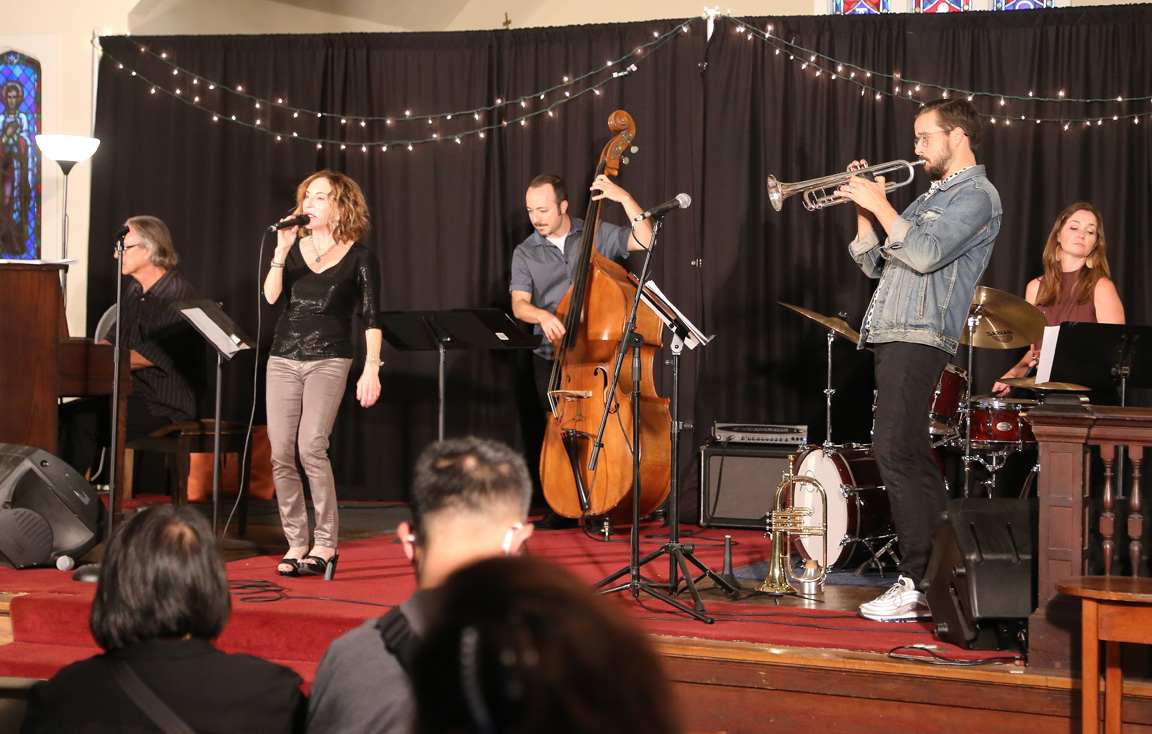 On Sept. 10, Don Littleton will offer a tribute to Eddie Harris, and other upcoming acts will include James Yoshizawa (Sept. 24); Mark Ferber (Oct. 8); Cathy Segal Garcia (Oct. 22) and the Leslie Baker Band on Nov. 12. Notices of upcoming performances are posted on St. Be’s Facebook page.

Events are publicized through a growing list of several hundred email contacts, and a $100 Facebook advertising investment per concert. Those ads are shared on music-related pages, Edwards-Acton said. “We also sell tickets through Event-Brite, which gives us a sense of what attendance is going to be, although most of our sales happen in person,” he said. “We’re already booked well into 2023.”

But Edwards-Acton is already exploring other revenue possibilities, like increased dining options, “on the patio, or in the parish hall upstairs, or even in the sanctuary itself, because there are tables in there. I could see making $200 to $300 on food for each concert. That would cover all our expenses, and it could go toward hiring folks to help run the sound.

“We can expand beyond the second and fourth Saturdays to weekly, invite more Latinx music, Filipino bands, maybe singer-songwriters to appeal more to the younger generation. We would like to start to diversify it even more,” he said.

Renovations are underway on a two-story rectory adjacent to the church which he hopes to turn into a revenue-generating opportunity. “We are looking to rent the upstairs – there are four big office spaces we hope will generate revenue to eventually pay for a full-time priest.”

“It could be a number of things, including a venue for music or food or nonprofit offices or a Jubilee Year core house … to bring life into there, too.”

His vision has also expanded beyond assuming that “church is synonymous with worship services. Worship is just one piece of church. We’re constantly only focused on inviting people into our space. But the church needs to become more like the community than the other way around.

“Sometimes, it means going off the church grounds; other times it means we can do it right on our grounds; we can be more like the community in our own space,” he said, adding, “We’re staking a claim in Eagle Rock.”