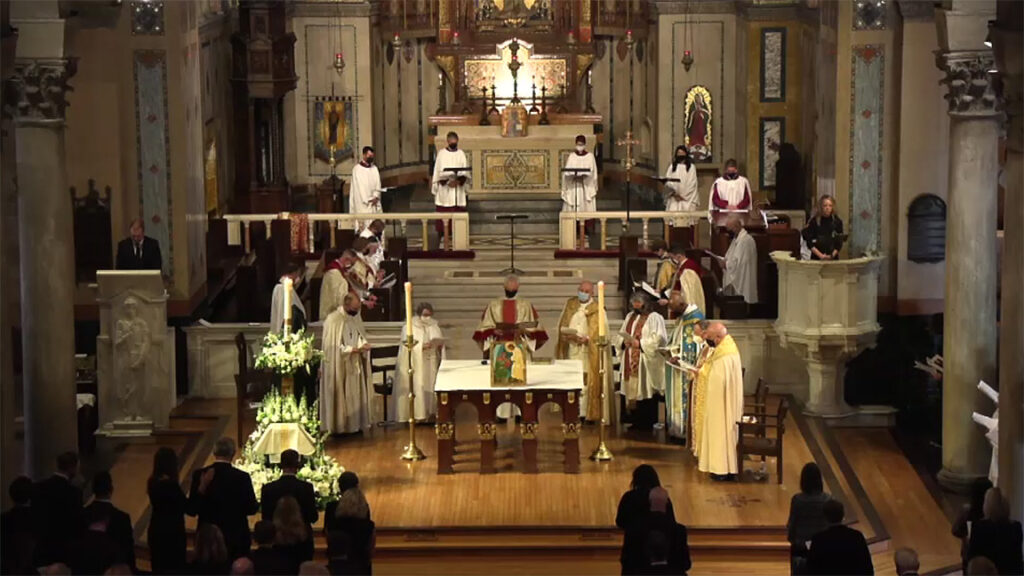 The congregation stands for the litany during the requiem Eucharist for Bishop J. Jon Bruno on May 1. Photo: Screenshot

Bishop Joseph Jon Bruno, the sixth bishop of Los Angeles, was remembered May 1 as “a giant of justice, a good shepherd, a family man, ‘Papa,’ the beloved husband, father and grandfather, and a son of the city” during a private family memorial service livestreamed from St. John’s Cathedral.

On behalf of Mary Bruno and the family, Bishop Diocesan John Harvey Taylor, Bruno’s successor, welcomed Los Angeles Mayor Eric Garcetti, Armenian Church Archbishop Hovnan Derderian, numerous bishops from The Episcopal Church, and mourners who gathered in person and thousands more who watched online to celebrate the life of Bruno, who was 74. He died suddenly April 23 at his home in La Quinta with Mary Bruno at his side. (An obituary is here.)

“Jon was a son of this city, a priest in every fiber of his being, a giant of justice, a good shepherd … the way of love and equity was always clear in Jon’s heart,” Taylor said. “He could always see over the horizon and deep into the promised land.”

Bruno’s compassion and love meant a resounding “yes” from the towering former football linebacker, Taylor said. Yes to a child welcomed to the altar, yes to a colleague needing help, yes to a priest-to-be who was stymied in another diocese, yes both to Israelis and Palestinians, yes to a mayor wanting a word of advice or prayer — yes to an unconscious patient in the ICU whose family knew that if one whispered voice could get through, it would be Jon Bruno’s.”

Taylor said Bruno “was frank about his setbacks and what he had learned from them. “Everyone who does this work – anyone who does any work well – had better follow this lesson according to Jon. We pave the road to wholeness with the bricks of our brokenness.”

He added: “Jon’s heart sometimes seemed to be as big as the whole world. Wherever we are today, in the unity of our grief, let us go forth, as Jon did, leading and ending with love.”

Los Angeles Bishop Suffragan Diane M. Jardine Bruce said, “Celebrating Jon’s life in the cathedral with Jon’s family was deeply moving – his love of St. John’s, his love of his family and the diocese were palpable. I could feel his spirit there, consoling us all as we celebrated his life.” 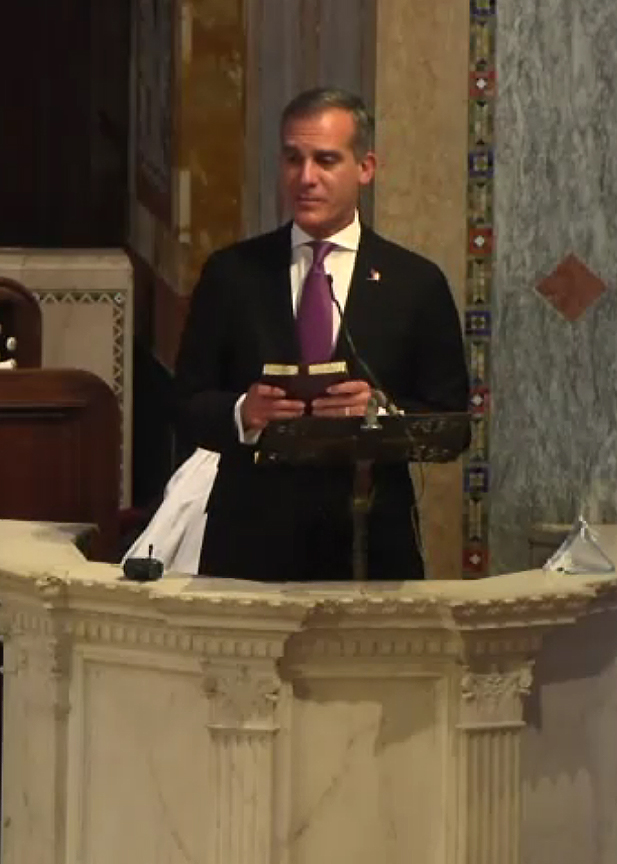 Los Angeles Mayor Eric Garcetti, holding a bible given him by Jon Bruno, said the late bishop was for him “a great guide for life.” Photo: Screenshot

Family friend and L.A. Mayor Eric Garcetti, visibly emotional, recalled how Bruno had sworn him in as a city council member in 2005 and was “a great guide for life.” Whether aiding homeless Echo Park neighbors, helping the food insecure, fighting for immigrants, he “showed me the example of what it meant to be a leader in Los Angeles.”

Remembering Bruno’s experience as a Burbank police officer, Garcetti added: “We need his voice so much right now to understand the human beings who wear badges and also the work that needs to be done to not always send a badge to every problem that we have.”

Garcetti recalled the “Hands in Healing” cross country bus tour Bruno initiated shortly after he became bishop diocesan in 2002, a centerpiece of his episcopacy. “Here was this 6’5 former football player, former police officer, but also former freedom fighter, who said we need to take this generation of youth, and they need to see where Matthew Shepard went to heaven, to go into the South to see what this country did, and to bear witness to what healing is … so that we can walk together.”

Bruno frequently talked about his love for family, “about how we walk through this valley of the shadow of death but that that was testament of light, not a shadow,” Garcetti said, at times addressing Bruno directly. “He helped pull me through so that I can help pull the city through. On behalf of 4 million grateful souls, thank you for making Los Angeles what it is today.”

The Rev. Canon Bob Cornner, retired rector of Christ Church, Redondo Beach, said serving with Bruno as bishop was “grace upon grace. I left my 31-year career in public education to take on a full-time ministry, in large part so that I could serve with Jon as he started his ministry as our bishop. I will be ever grateful for our time together. … Well done, thou good and faithful friend.”

Another longtime friend, the Rev. Canon Michael Cunningham, rector of St. Mary’s Church, Lompoc, read an essay written by Bruno about love. “[Love] is the glory of God’s intended creation, experienced in autonomy and individual wholeness as two persons stand side by side as equals, friends, confidants and lovers,” Cunningham read. “It is a caring in which we are aware that love is not without pain. It is living in a relationship that allows us to say no when it would be much easier to say yes; to say yes when it seems almost impossible to say anything but no.” 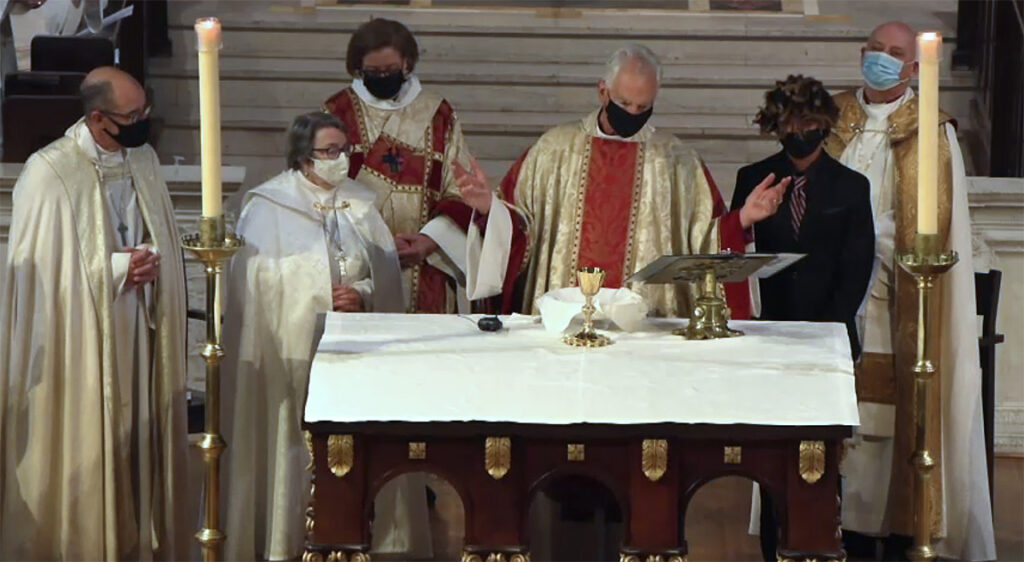 Retired West Tennessee Bishop Don Johnson officiated the two-hour service. In tribute to Bruno’s custom of always including a young person at the altar when he celebrated Eucharist, Jonah Mackenzie, 15, stood at Johnson’s side. Jonah’s father, the Rev. Lester Mackenzie, rector of St. Mary’s Church, Laguna Beach, was one of the travelers on Bruno’s 2002 Hands in Healing youth pilgrimage.

Philip Bruno, the late bishop’s younger son, told the gathering he had intended to illustrate the differences between Jon Bruno – the father, grandfather, “Papa,” husband – and Jon Bruno the priest and bishop and community leader, until “I realized there’s not a lot of differences.

“We were all remarkably special in his eyes,” he said. “We all have a very personal and unique relationship with my father. I can’t claim that mine is deeper than yours. And yours is deeper than mine because they were all their own relationships. And that’s magnificent to me.” 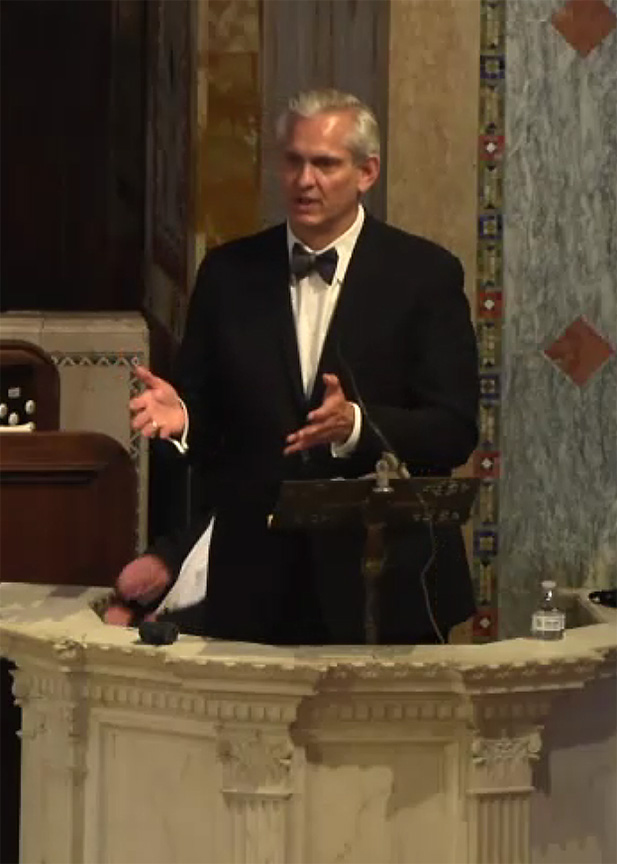 Laughter erupted as he recalled his father’s enlisting others in some of “silliest” moments, like mimicking a camel’s scream, “or hanging spoons from their noses. I have a picture somewhere of [Archbishop] Desmond Tutu with a spoon hanging on his nose. So nobody’s immune from the silliness of Papa Jon.”

Unconditional love was foundational for his father, who he believes “was the founder of pay-it-forward,” Bruno told mourners. Like others who addressed the gathering, he recalled his father’s many acts of kindness, including giving food and a ride to a hitchhiker while the family was returning to California after Bruno’s 1977 graduation from Virginia Theological Seminary.

Similarly, the Rev. Canon Anne Tumilty, rector of St. James, South Pasadena, said in her sermon that Bruno would suddenly stop his car, jump out, call a homeless person by name, give him or her a big hug and then offer assistance.

Recently, after noticing an elderly woman sitting on a bench, he approached and learned she had been evicted from her home and was afraid and didn’t know where she was going to go. “He found her shelter. He paid for it and set her up to be able to get the help she needed. 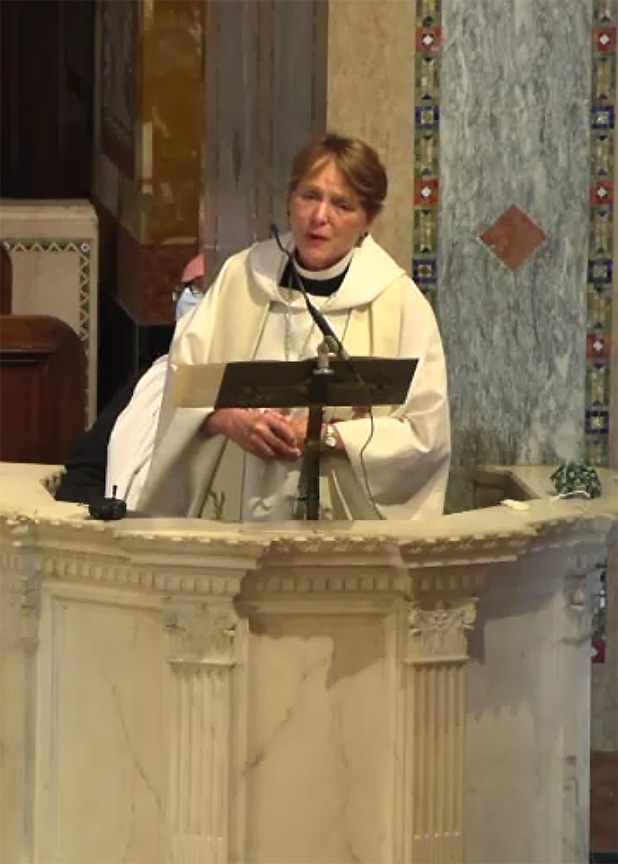 The Rev. Canon Anne Tumilty delivers the sermon at Bishop Bruno’s funeral on May 1 at St. John’s Cathedral. Photo: Screenshot

“There are countless stories like that, of lives he saved and futures that he launched,” Tumilty said. “From the son who is no longer in prison, to the soldier returning from war, needing to find the way home to God, but struggling with memories and post-traumatic stress syndrome. Refugees who are now safe from persecution, and death threats; his ministry with his beloved Mary to the children of Zebebdeh [Palestine]. There are so many, many stories.”

Bruno, she said, “drew close to the heart of God, because as a bishop, he knew that leading with love was the greatest strength of a leader. And yes, as a leader, he suffered. He knew his Gethsemane. He walked the Via Dolorosa, the way of the cross. In the later years of his ministry, as he followed in the footsteps of Jesus, he experienced the human frailty of the institution of the church, and all that went with it. Yet, like the Lord Jesus he followed, who offered forgiveness even from the cross, he told the many who came to his house to seek counsel, ‘you must forgive.’”

Philip Bruno said that on April 23 his father and Mary spent the day “remembering the good times,” watching hummingbirds buzz, shopping to prepare for dinner with friends, laughing, telling jokes, singing songs, sharing their love for each other. “It was the most beautiful day.

“He left us happy; he left us prepared. And he’s still with us … He’ll be walking with each of us every day.”

A video of the full service will soon be posted on the Bruno family’s memorial website.