The end may be near, but radical change can save the earth, says climate activist Mary Nichols in Margaret Parker Lecture 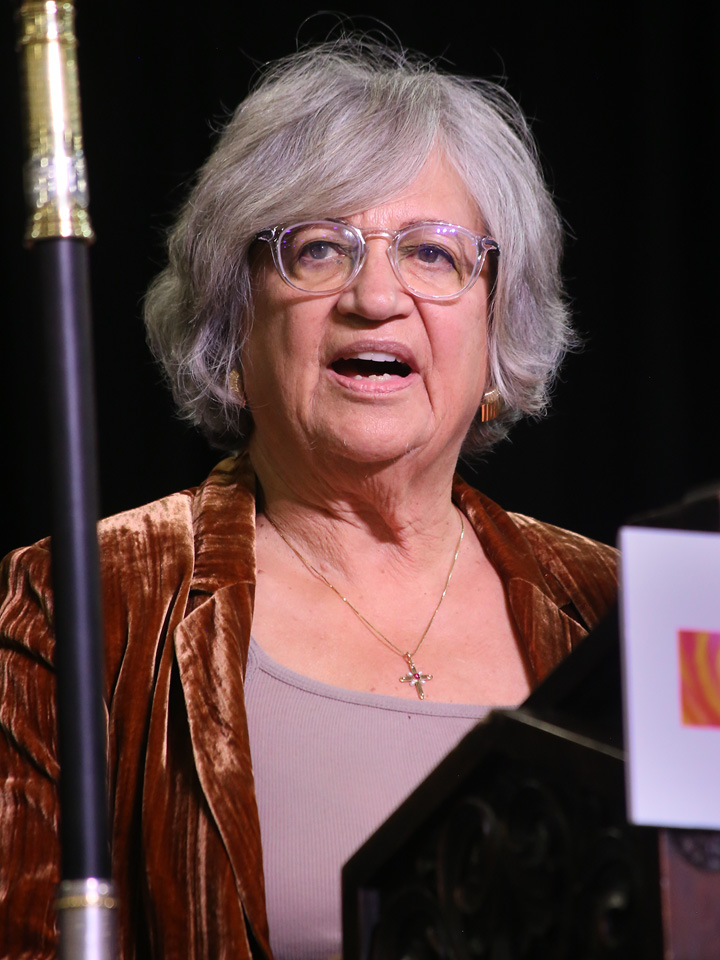 [The Episcopal News] Unless radical changes are made in current energy use, “the guy with the sign that says, ‘The End is Near’ is right – probably before the end of this century,” environmental attorney and climate activist Mary D. Nichols told delegates attending the Nov. 13 annual meeting of the Diocese of Los Angeles in Riverside.

But there is a great deal of hope if people of faith collaborate on solutions, added Nichols, a parishioner at St. James in-the-City Church in Los Angeles, delivering the biennial Margaret Parker lecture at Diocesan Convention. She had just returned from the Oct. 31 – Nov. 12 United Nations Climate Change COP26 conference in Glasgow, Scotland.

Canon to the Ordinary Melissa McCarthy introduced Nichols as the “Queen of Green” who has been named “the single most influential environmental regulator in history.” McCarthy attended COP26 virtually, as part of Episcopal Church Presiding Bishop Michael Curry’s delegation. (See related story here.)

“If you’ve watched our skies become less smoggy, you have Mary Nichols to thank for that,” said McCarthy, who is slated to lead a new diocesan task force on climate change.

Nichols, a Yale University Law School graduate, is currently a distinguished visiting fellow at Columbia University’s Center for Global Energy Policy. She is the former chair of the California Air Resources Board, on which she occupied the attorney seat before concluding her final term Dec. 31, 2020. She was appointed to the board by Gov. Edmund G. “Jerry” Brown Jr. (1975 – 82 and 2010 – 18) and reappointed by Gov. Arnold Schwarzenegger (2007 – 2010) and Gov. Gavin Newsom (2019 – 2020). She also served as California’s secretary for natural resources (1999 – 2003), appointed by Gov. Gray Davis.

McCarthy said Nichols got her start in Riverside where, as a new lawyer she sued the federal government, arguing that under the Clean Air Act, the Environmental Protection Agency “must force California to develop a real plan to deal with its pollution.”

A mission to spread the word about California

While the Glasgow conference ended without “a big, bold agreement,” the fight against climate change happens at the state and local levels, as evidenced in California’s progressive policies, said Nichols, whose address was frequently interrupted by enthusiastic applause.

For example, “when California put in place a ‘cap and trade’ or carbon allowance system, the state required the electric utility to buy allowances to cover their carbon emissions. The state also offered incentives to reduce those emissions by switching to improving efficiency or providing carbon-free electricity like wind and solar to their customers. The benefit was required to be passed on to consumers in the form of a bill credit,” she said.

The point is to place the burden of complying with climate requirements on those responsible for making the switch to cleaner fuels, and to spare their customers both the cost and the impossible task of making the switch.

Nichols’ personal mission for at least a decade has been to “spread the word about California’s zero-emissions mandate for new cars and trucks … (which) did more to inspire the surging demand for advanced technology vehicles and the broad response by manufacturers than any other single factor,” she said.

Other notable California climate actions include:

Nichols said the Glasgow conference also offered opportunities to learn from what others are doing, “like Ikea’s campaign to have all its deliveries worldwide made by zero-emissions trucks by 2025, or New Mexico’s plans to wean itself from its role as one of the top oil and gas producers in the U.S. by 2045.” 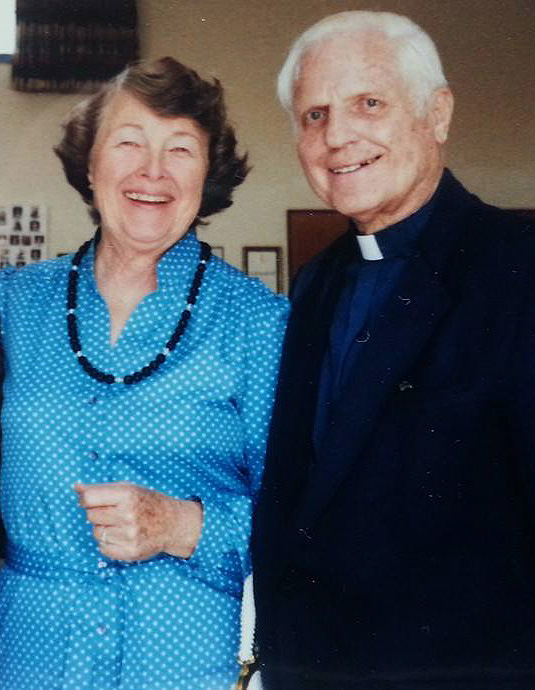 The stewardship of thinking big; acting out of love, not fear

A transition away from the side effects of fossil fuels is necessary and the responsibility of people of faith, Nichols said, is to seek tools to make the transition happen as fast and with as little harm to individuals as possible.

We need “to act out of hope and from a place of love, not fear … to engage with each other, spread good deeds, try solutions and keep trying,” she said.

“The persistence of poverty, of racism, of unequal justice requires us to keep working. Solving for the disaster of climate change needs to be done as part of and in conjunction with our ethical duty to address those evils. And not being afraid to think big.”

Churches and individuals may begin by integrating sustainable energy into ongoing agendas, whether that involves property management or investing diocesan funds.

“We can all learn more about the opportunities for greening our surroundings with climate-appropriate trees that help reduce air conditioning costs, conserving imported water, reducing food waste and single-use plastics in our schools and homes. But,” she added, “we also need to insist that governments at all levels stop subsidizing the oil and gas industry and make them clean up their waste.

“Just as car companies are collaborating to bring down the high cost of batteries, we can find ways to share purchases and services with neighboring institutions. Above all, we need to support each other by talking about our concerns and learning about what can be done.

“If we can find the energy and courage to begin the conversation, I believe we can discover new ways to succeed in this monumental but absolutely essential task of stewardship. I am looking forward to taking the next steps with you.”

The lecture series honors the life and ministry of Parker by addressing topics of peace and justice through the empowerment of women. The series was launched in 2008, a year after Parker died at the age of 93. She was a lay leader and ministry partner with her husband, the Rev. Canon Richard I. S. Parker, who served for 42 years as rector of St. Cross Church in Hermosa Beach. 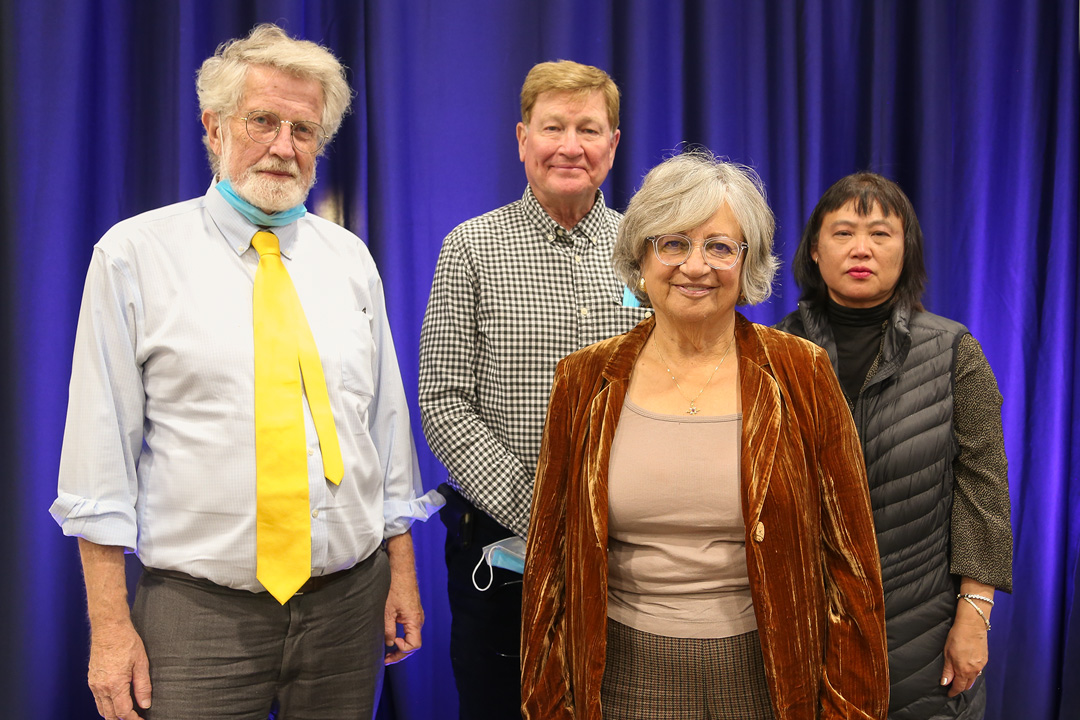 Richard Parker, lecturer in public policy at Harvard University’s Kennedy School of Government, who attended Nichols’ Nov. 13 address along with his brother Stephen, said Nichols life and work, “models our mother’s vision of women’s voices in creating justice not just on God’s Earth – but for the Earth itself.”

The California Air Resources Board web site notes that when not working for the State of California, Nichols served as a senior staff attorney for the Natural Resources Defense Council; assistant administrator for U.S. EPA’s Office of Air and Radiation, in the administration of President Bill Clinton; and headed the Institute of Environment and Sustainability at UCLA. Throughout her career as an environmental lawyer spanning more than 45 years, “Mary Nichols has played a key role in California and the nation’s progress toward healthy air. She has also led the board in crafting California’s internationally recognized climate action plan.”

Nichols has said her current priorities include equipping young leaders “with a mandate to help lead us forward” and “creating opportunities that encourage people of all ages to take authority” to protect the environment and help reverse climate change.

McCarthy, who is looking ahead to the work of the new diocesan task force, said the lecture set the tone for future environmental action opportunities.