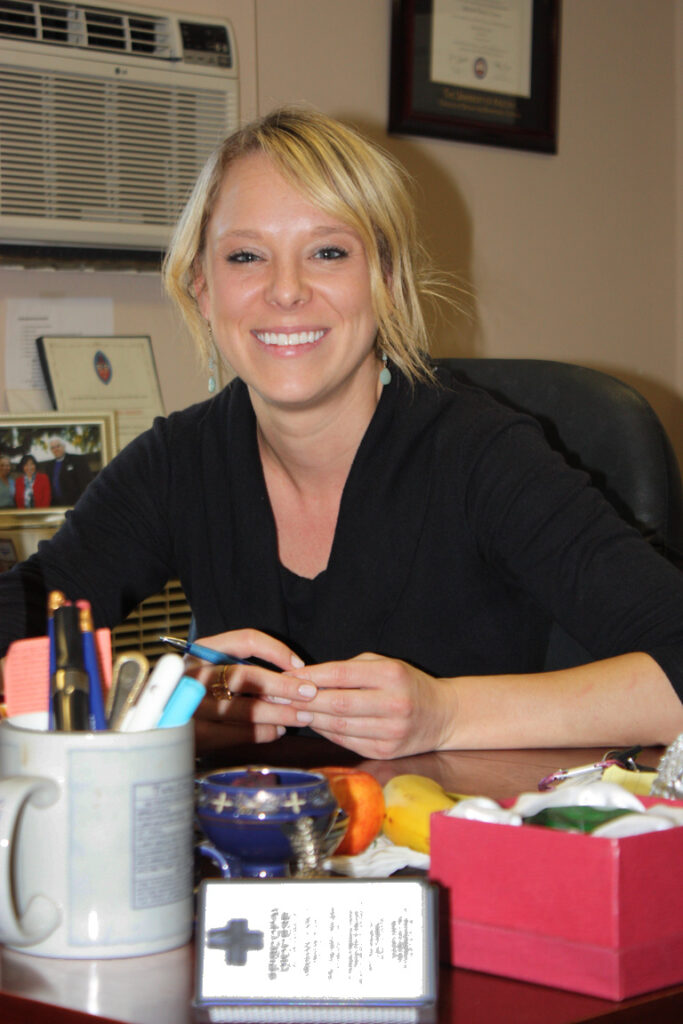 Meghan Taylor is pictured in her office at IRIS, located at St. Francis’ Chapel in the Atwater Village neighborhood of Los Angeles. Photo: Janet Kawamoto

[The Episcopal News] Leaving IRIS after a dozen years as executive director is, for Meghan Taylor, saying goodbye to family.

Leading the diocesan Interfaith Refugee and Immigration Service “has been the joy and pleasure of my life, to be part of a really amazing and wonderful team and to help so many people over all these years,” an emotional Taylor told The Episcopal News in a recent telephone interview.

“But I don’t think I will ever truly leave working with refugees and immigrants,” she added, her voice breaking. “Anybody that’s ever gotten involved in a ministry of welcome never truly leaves it. It is such a transformative and life-changing, amazing experience that I’m sure I’ll continue it in some way.”

For Taylor, that involvement began while she was a second-year student working in the University of St. Thomas Law School clinic in Minneapolis, Minnesota.

“My very first client was a woman from Kenya” seeking asylum in the U.S. “She was a little, tiny thing, about 4’9, but the biggest, bravest, strongest woman I’ve ever met,” Taylor recalled.

“She was a midwife and had refused to practice female genital mutilation. As a result of that, and threats at one point to help rig an election going on at the time, she was imprisoned, tortured, branded, raped. She stood up for what she believed in. She was able to escape and get to the United States and somehow found her way to my law school clinic.

“Here I was, 24 years old at the time, sitting across from her and tasked with the job to make sure she’s safe and able to stay here, because if she returned to Kenya, she would be killed,” Taylor said. “She had nine daughters. Having her win her case and going with her to help welcome one of her daughters that she never thought she’d see again … changed my heart and gave me a clear sense of what my purpose would be and the way in which I could give back.”

Los Angeles Diocesan Bishop John Harvey Taylor (no relation) said: “Meghan came to IRIS at its time of need and delivered what it needed most – professionalism, steadiness, and devotion to its core mission of offering safety and hospitality to the sojourner.

“During the prior regime in Washington, she and her colleagues were faithful, dedicated, and innovative, keeping IRIS together so it can now care for those fleeing danger and violence in Afghanistan, Ukraine, and all around the world.” 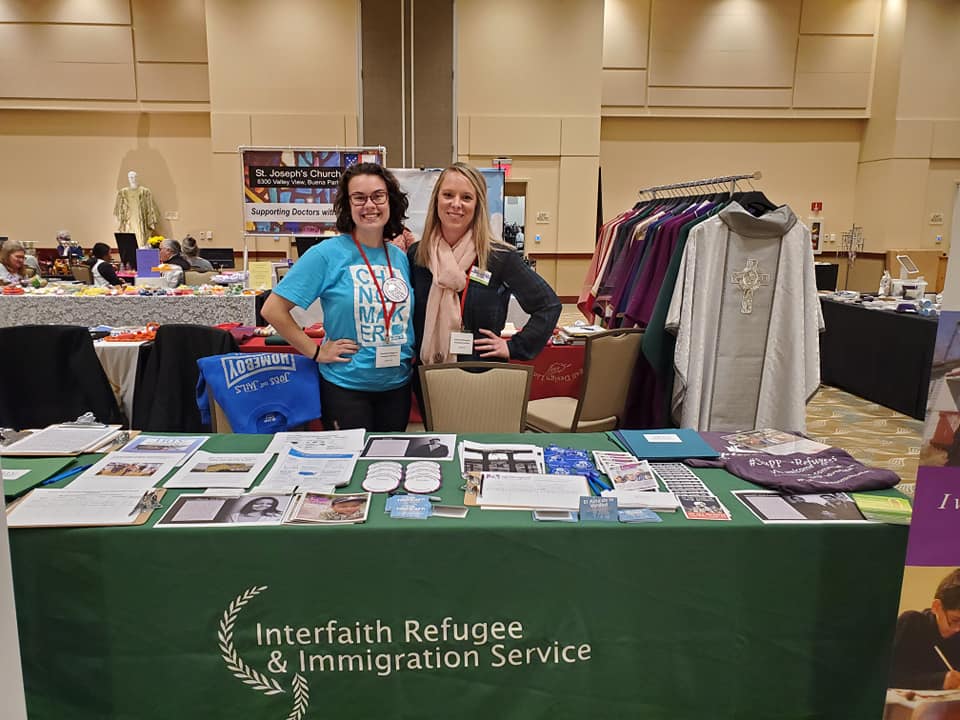 Taylor and a colleague pose at IRIS’s exhibit hall booth during Diocesan Convention in 2019. Photo: IRIS

Former Bishop J. Jon Bruno appointed Taylor, an immigration attorney, to lead the agency in 2009. In less than a year, she launched a legal services program, focused on naturalization and helping people apply for U.S. citizenship. About 90% of the agency’s services are entirely free to clients, because of grants and contracts obtained through funding partners such as the California Department of Social Services.

“I think about everything I’ve learned, working with [Bruno] and … (near) the anniversary of his passing, I think about how much he taught me and how much I wish I had the chance to tell him how he was such a man of faith and how his resounding yes (to expanding IRIS) ended up touching the lives of thousands and thousands of people.”

“Meghan has been a joy to work with,” said Canon to the Ordinary Melissa McCarthy. “She is clear, thoughtful, and strategic. Her care for all of those whom IRIS supports as well as her care for the IRIS staff has highlighted her excellent leadership skills and her deep compassion for the most vulnerable. The work Meghan does is gospel work and while we will miss her, I have no doubt that with her faithful heart and her sharp mind, she will continue to do work that transforms lives.”

Under Taylor’s tenure, IRIS has grown dramatically, but has also weathered some tough times under different federal administrations.

“At times, we had a staff of about 23 people and other times we were down to about five of us,” she recalled. “At its low, our annual budget has varied from about $500,000, about half of which was direct assistance for clients, to as much as $2.3 million.”

In lean years, including the pandemic in 2020, the agency resettled fewer than 50 refugees, compared to the 1,200 resettled in 2009. Because of cuts in the numbers of refugees allowed to enter the country, the number of resettlement agencies in Los Angeles shrank from nine to three serving clients within a hundred-mile radius of IRIS’s offices.

The immigration services program has experienced consistent growth and has sustained the refugee ministry through those lean years, Taylor said. “The diversification of services has really ensured the program’s survival through years in which refugee arrivals came to a near-halt.”

Hilda Sarkisians, a refugee program supervisor, recalled how “one by one, the desks emptied in our offices,” during the Trump administration. “Then Covid came. And there were only four of us, and Meghan remaining. It just got empty.”

For Sarkisians, a refugee from Iran who speaks Farsi, Armenian, and English, Taylor, 37, is an inspiration. “After Meghan interviewed me for the position at IRIS, I went home and told my kids, ‘You can be one of those people someday.’ From the first day I entered there, we were family.”

“To provide legal services, you really need to be recognized and accredited by the Department of Justice. We thought it was our responsibility to follow our clients until they get full legal status in the U.S.”

The agency resettled Ruben Tomasian from Iraq; later he returned as a temporary employee through a Los Angeles County program. In 2014, Taylor hired him. 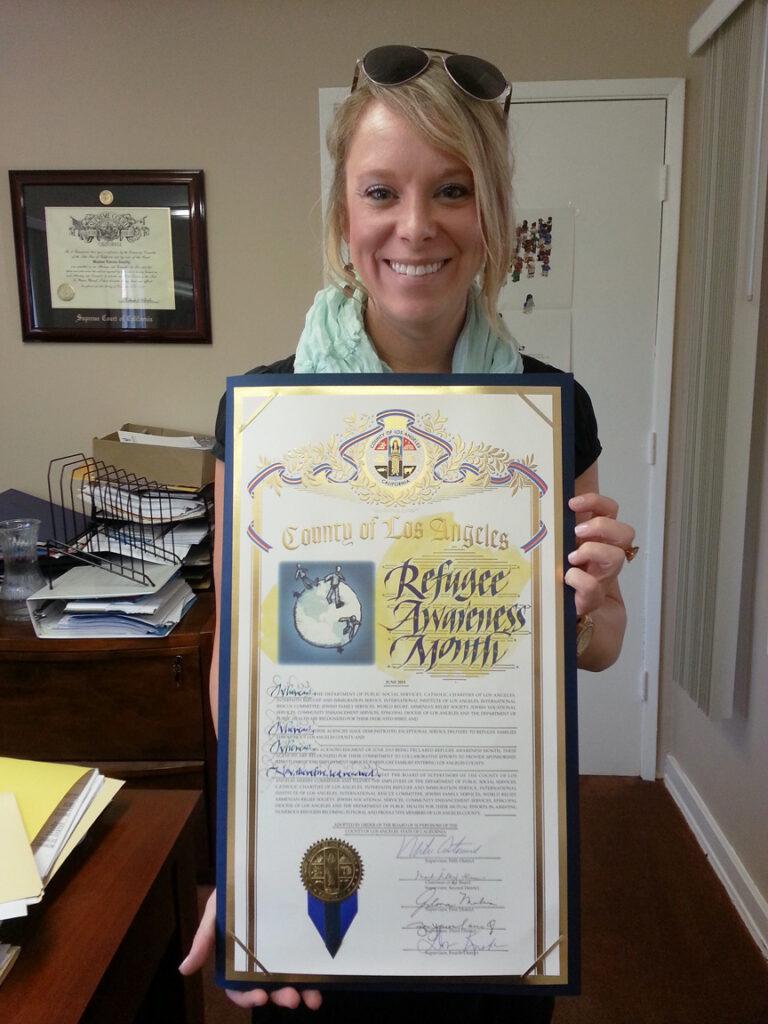 “Meghan saw how I was working, how I cared about refugees and how I cared about working with the new arrivals,” he said. “I learned case management in a very short period.” Under her guidance, his first job in the U.S. has become a powerful vocation, according to the senior refugee case manager.

Taylor is caring, supportive and accessible, he said. “Once I called her around 11:30 p.m. I was at the airport, picking up a client and I needed to talk to her. At IRIS, we ae like one family.
This program is making a very positive impact in newcomers’ lives. I know. I was one of those people and, every day, we are helping a very vulnerable family.”

Orucevic agreed. “We work directly with people coming to the U.S. who are experiencing culture shock. We help them go through the first weeks and months in a new country, a new environment, a new culture, and it is very, very hard emotionally.”

Taylor is well-respected in the refugee community, she said. “The diocese is becoming more and more known in the community, especially among low-income people, that this is a great professional and humanitarian program. Meghan built IRIS into what it is today.”

José Serrano, director of Church and Community Engagement for World Relief Southern California, a refugee resettlement agency in Los Angeles, said Taylor has been an advocate for refugee reform through her participation in many professional organizations.

As a member of the California Advisory Council on Refugee Assistance and Services, she has helped improve guidance recommendations for implementing refugee programs, he said.

“Meghan is a kind, caring, loving presence for folks with no status, making sure they have access to services that will ultimately pave a road easier to travel for them, and just to navigate life.

“It’s going to be a huge loss, in the sense that she is an advocate, a person who cares,” Serrano said. “She really lives her life in a godly way, caring for the most vulnerable and always advocating for them in whatever capacity possible.”

Initially Taylor and her family – her husband Garrett, 5-year-old Camden and 3-year-old Madelyn – had planned a move to Puerto Rico last summer, as part of “an opportunity for our children to experience a new place, a new adventure, a new culture, and to learn another language,” she said

Working remotely during the pandemic, “I had time inside, to spend with my young children. I was seeing things I hadn’t had time to see before. I think a lot of people reflected on their life and thought about what they’re doing and how they’re helping. For my family, we just needed a change. We’ve been wanting to something like this for a long time and there’s no better time than now, while our kids are still young.

“We’ll have an adventure and we’ll be back, hopefully bilingual, and maybe I’ll get back into the work in a few years.” 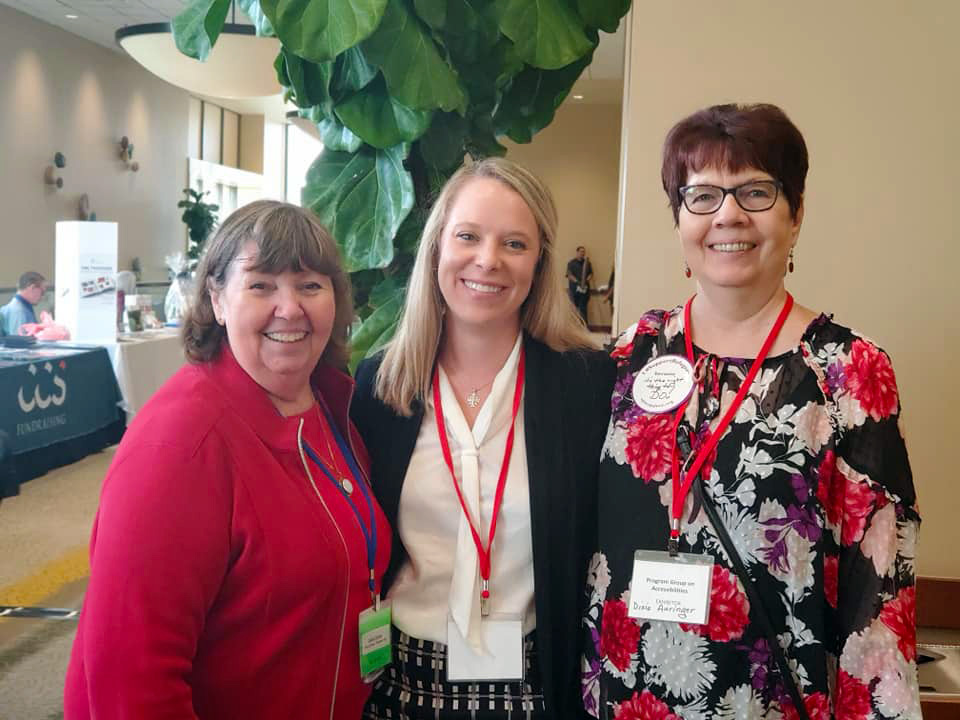 The Afghanistan crisis delayed that dream, she said. “The program was changing too quickly and there were so many unknowns,” said Taylor. “There was an unprecedented wave of arrivals that no one expected, so I agreed to stay on.”

Although the family has relocated to an area about an hour east of the capital city of San Juan, she has continued working remotely to ease the transition.

“I am looking forward to being a mother to my children, to taking a pause and figuring out what God has in store for me next,” she said. “I want to take some time to reflect on being present as a mom to my kids, to embrace a new culture, and focusing on learning Spanish. It’s been on my to-do list for 20 years.”

However, “at the same time, I don’t think I’ll be able to sit still for long,” she said. “The months we’ve been here in Puerto Rico, I can see there’s so much need on the island,” which was devastated by Hurricane Maria in 2017 and again in 2021 with Hurricane Ida.

“I hope to bring some of the lessons I’ve learned and some of the knowledge I’ve gained these years working with IRIS to support families struggling here.”

IRIS is an affiliate agency of Episcopal Migration Ministries of The Episcopal Church and director Demetrio Alvero called Taylor “a superstar” among affiliate leaders.

“Meghan has done a phenomenal job in Los Angeles,” working with surrounding counties and in challenging times,” he said.

“One of the truly marvelous works she’s done is with family reunification cases. Refugees who come here can complete an application to bring in family members to keep the family whole. Los Angeles has led our network in filing applications for family reunification. I know she has received commendations from the mayor and other leaders.

“You’ll find a successor for her, but you’ll never find a replacement.”