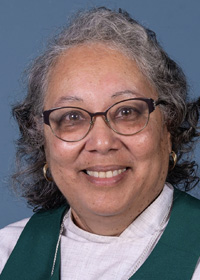 Sister Patricia Sarah Terry, the new chair of the Bishop’s Commission on Gospel Justice and Community Care, grew up in the Catholic church in Chicago’s Hyde Park neighborhood but says she has always been an Episcopalian at heart.

“I claim to be a cradle Episcopalian, because I never fit with the Catholic church from the very beginning. Even the nuns had trouble with me because I asked too many questions,” she recalls laughingly.

By the time she was 10, “I had so much trouble with church doctrine as I learned about it, I became agnostic. I think I liked the word.”

Terry, 67, joined the Episcopal Church in 1982 “and I never looked back, although I still cherish many traditions, particularly liturgy and the worship and devotion of many people in the Catholic church … no hard feelings.”

Although she is a retired attorney, the widow of a former law enforcement officer, and has experienced excessive police force firsthand, the soft-spoken Terry said she hadn’t expected to be involved with the commission until approached by Los Angeles Bishop John Harvey Taylor.

“I was surprised, but I was also aware of my own commitment to this problem and not only as a member of the diocese, but as a human being. A human being with a grandson,” said Terry, who is African American. Police violence “can happen to anyone. We all have stories.”

Taylor conceived the commission after the May 25, 2020 murder of George Floyd sparked worldwide protests and a national reckoning on police violence and systemic racism. Floyd, 46, died after Chauvin – then a Minneapolis police officer – pressed his knee on Floyd’s neck for 9 minutes and 29 seconds as Floyd lay face down, hands cuffed behind his back. A jury on April 20, 2021 found Chauvin, 45, guilty of unintentional second-degree murder, third-degree murder and second-degree manslaughter.

In appointing Terry as chair, Taylor said, “The Holy Spirit made it pretty clear, for a number of reasons, that the chair of our commission was Sister Patricia Sarah Terry, a person knowledgeable about the corridors of power in Washington, D.C., and an attorney, and a contemplative.” (See related story here.)

Her own story happened years ago when she was stopped by police after she made a wrong turn late at night on the University of Maryland campus while taking a cousin back to her dormitory room.

“Looking back, we were operating in two different worlds,” she said. “I was trying to get my cousin to the dorm after her car accident. He was a very young rookie cop who had encountered what he thought were two suspicious Black females on campus. I had no idea why he was detaining me so long, so I started to question him.

“The next thing I knew, two police cars roar up and officers in tactical gear with shotguns jump out on either side and their guns are trained on me. I just knew this was something that was horribly wrong.”

Eventually, a senior officer approached her. “He asked me what was going on, and I thought, I have no idea.”

Terry was able to de-escalate the situation by showing him her U.S. Department of Justice credentials. But the rookie officer still issued her a ticket, which “I beat in court,” Terry recalled. “I had him on the witness stand and cross-examined him. The fear in this man’s eyes, I’ll never forget.”

A lifetime in law and justice

Terry has served at the Internal Revenue Service, overseeing litigation of employee benefits plans and managers in tax and bankruptcy court; and was deputy general counsel for policy and regulations at the Pension Benefit Guarantee Corporation in Washington, D.C.

After a move to California, she went into private practice “but didn’t like it. I love helping people. But, when you bring money into it, I don’t like it. As much as I wanted to function as a private attorney, I wasn’t prepared for business part of it. After my husband died, I said, ‘I’m not doing this anymore.’”

Her husband, Jeffrey Terry, who had been both a deputy officer in the Sheriff’s Department and had worked with the L.A. County Office of Emergency Management, died in 2015. His father was World War II Tuskegee Airman Lt. Roger “Bill” Terry.

The soft-spoken Terry has a daughter, two stepsons and six grandchildren and lives in the South Bay. She is a parishioner at St. Cross Church, Hermosa Beach and is also a current member of the Anamchara Fellowship, an Episcopal monastic community committed to intercessory prayer and service, pastoral care, and spiritual direction.

“I didn’t know that I would go on to become a member of a religious community,” she said. “That started probably in my late 40s. I began to explore things more deeply to appreciate how important community is. Sometimes we also recognize we need a soul friend – someone to share our journey in a spiritual way.”

The Anamchara fellowship “is focused on the ministries of spiritual direction, Christian education and pastoral care. I see all of those as being about healing and wholeness and this is a community where I felt very much at home and it is recognized in The Episcopal Church. Bishop Suffragan Diane M. Jardine Bruce is the Bishop Visitor for the entire fellowship.”

Since her appointment as commission chair, she has spent a lot of time learning, researching, praying and listening. She will also seek experts and to engage others throughout the diocese.

“I thank the bishop for having called us to this work and for trusting me with this possibility,” she said. “I am looking to not just members of the commission but to others in the communities and whether or not they are part of the church to join for us to join with them, to see how we can all work together.”