Presiding Bishop visits to ‘stand with’ diocese during turmoil 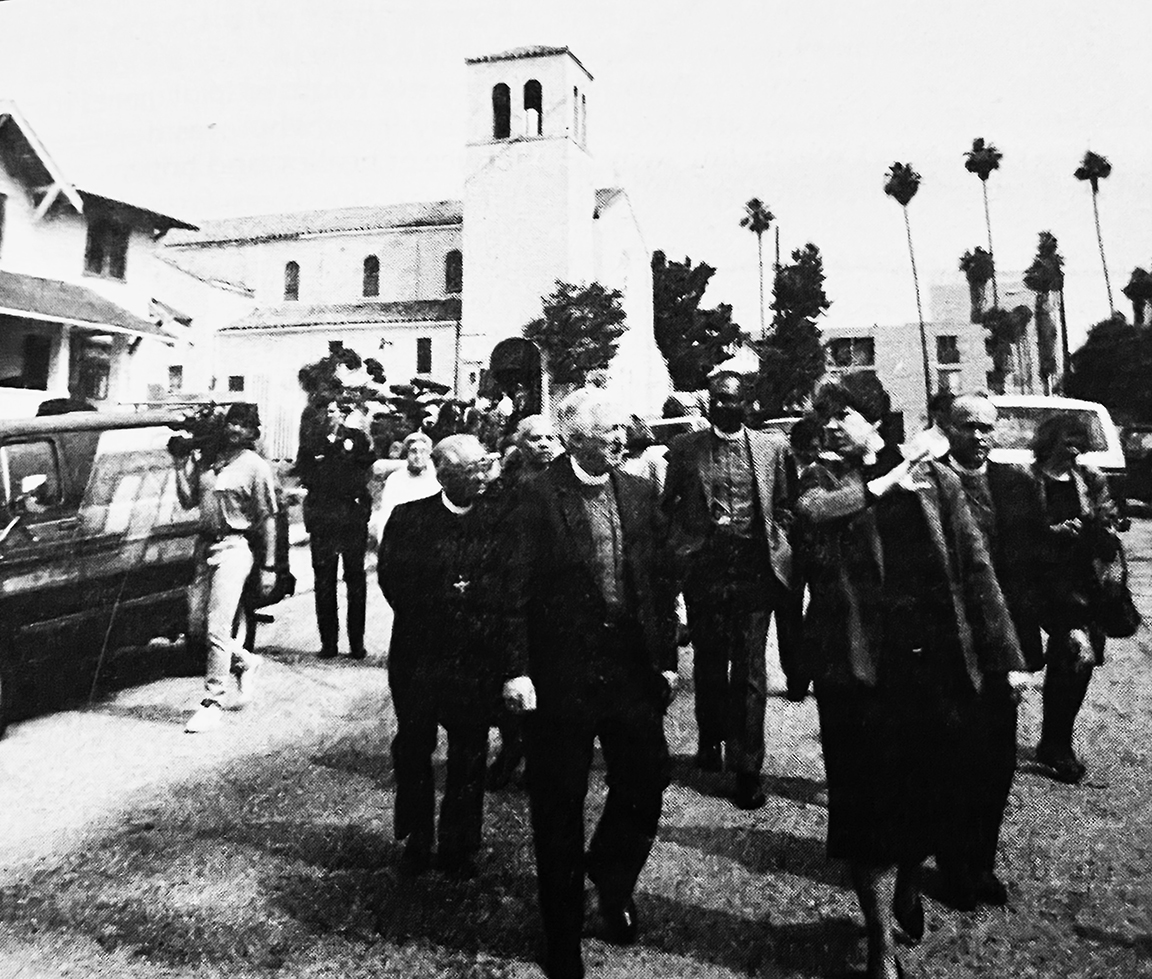 [The Episcopal News] Declaring the need to view the devastation first-hand, Presiding Bishop Edmond L. Browning toured riot-torn Los Angeles on May 6 and called for an end to racial isolation.

“Isolation just can’t be a part of who we are,” Browning said during a visit to St. Mary’s Parish in the heart of hard-hit Koreatown in Los Angeles.

Browning made his remarks after listening to pleas among clergy and lay leaders for greater understanding in a city once thought of a multicultural role model to the nation. Education in multiculturalism, he said, is one answer.

“There really are some excellent programs in terms of cross-cultural training,” Browning said. “Racism is not going away until we deal with racism in ourselves.”

During a service in which he celebrated the Eucharist, Browning said he felt the “same sense of dismay, shock and anger” at the scenes of the civil unrest as he did “when the Persian Gulf war began.

“I knew in the deepest resources of my heart… that I had to come to Los Angeles and stand with you. I had to make that witness,” Browning told 275 worshipers in his sermon.

“I just want to say in closing that I love you. I share your sorrow and also share your hopes,” Browning said at his sermon’s conclusion.
Among those Browning listened to during an earlier walking tour around St. Mary’s was parishioner Young Sook Chuong, 70.

Through an interpreter, Chuong expressed dismay that the Korean community seemed targeted for much of the violence, and she told of feeding a new sense of fear and depression since the rioting. 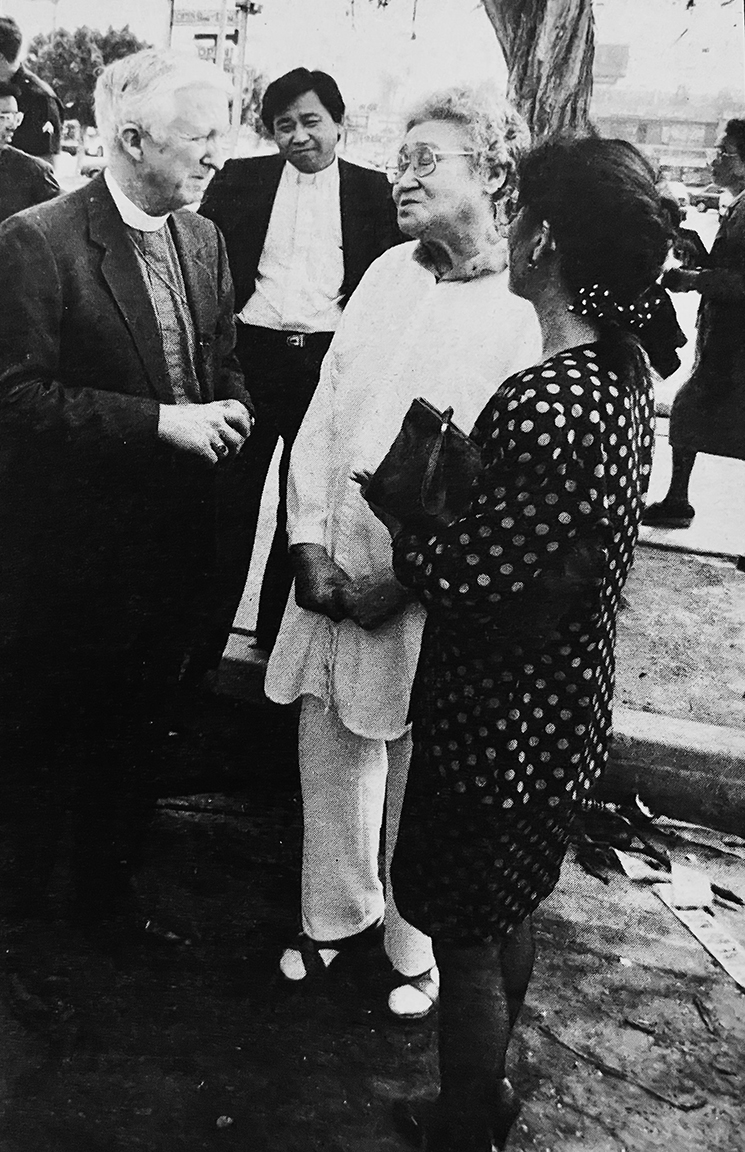 Presiding Bishop Edmond Browning talks with St. Mary’s parishioner Young Sook Chuong during May 6 tour of Koreatown before Eucharist at that church. At right is Joon Matsumura, diocesan comptroller, and in background is the Rev. Jonathan Won. (Episcopal News photo by Catheryn Franklin)

Browning told the woman, “I really have come to say that I and the whole Episcopal Church wish to stand with the people who have been affected by the riots and destruction.’

During an afternoon meeting in the St. Mary’s parish hall, Browning said the question now is “how do you translated all that pain and emotion into a constructive response?”

Many vented a sense of frustration.

Julia Harris, from St. John’s Church, Los Angeles, said white people have been isolated from African Americans and the poverty in the ghettos for too long.

Harris said she watched dramatic changes at her own church.

I watched it go from white to black because the community went that way. White people migrate out of the city and it becomes a ghetto because it’s black,” Harris said.

“They say white people won’t come back (into black neighborhoods) because they are afraid. I stand here. I’m a human being. I’m not afraid of you, why are you afraid of me?” Harris said, adding, “I’m an American. You can’t sit out there in your little area. You’ve got to see how these people live.’

The vicar of St. Francis Church, Simi Valley – the community where four police officers were acquitted of beating black motorist Rodney G. King – said she reacted with shame at the verdicts.

“I had such a feeling of shame I didn’t know what to do,” the Rev. Barbara D. Mudge said.

“Simi Valley has been blamed for a lot of this and probably some it is true. But in all Ventura County, we’re pretty much isolated,” Mudge said of the community where the trial was moved because of pretrial publicity.

Mudge said she has invited people from two black congregations in Los Angeles to attend services at her church.

Browning said he had been asked by reporters to comment on remarks by President George Bush blaming liberal poverty programs for the riots.

“I thought that was an irresponsible comment,” Browning said. “It’s a much deeper thing. A lot of misdirected values come from an emphasis by both parties toward consumption….”

Before leaving to fly back to New York, Browning said he saw congregations moving forward in three areas – dispersal of immediate relief, cross cultural training to deal with the issues of racism and adopting a leadership role in redeveloping the “community that has been so devastated.

“If that doesn’t happen, we’ll be back to where we were.”