Luis Garibay: The ‘superglue’ holding it all together at St. Paul’s Commons and beyond 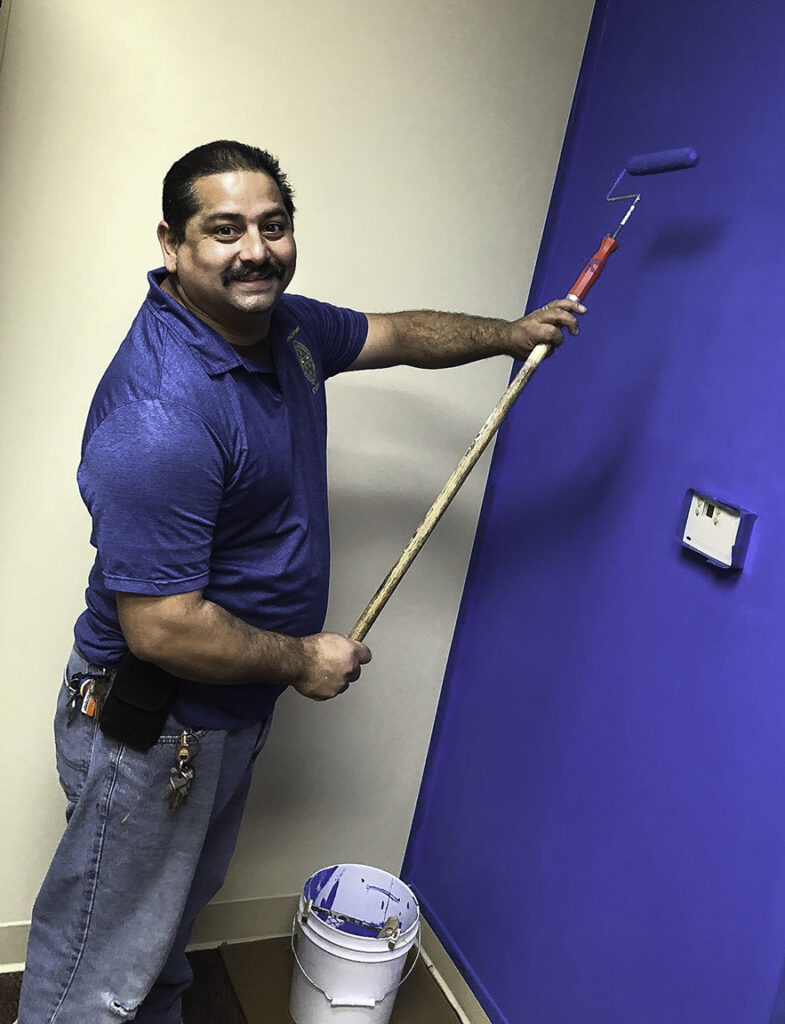 Luis Garibay paints an office wall in 2017 – one of the many maintenance chores he performs at St. Paul’s Commons, where he is building superintendent. Photo: John Taylor

[The Episcopal News] St. Paul’s Commons Building Superintendent Canon Luis Garibay is on his way to pick up a vintage chapel altar table, once used by the late Rev. Canon Morris Vaughn Samuel Jr, canon pastor at the former cathedral before it was demolished in 1980.

Recovering historical artifacts from across the diocese is just one aspect of Garibay’s role; he oversees the setup and teardown of diocesan conventions and other in-person meetings and events, while shepherding the care and maintenance of the buildings and grounds at the Los Angeles diocesan headquarters.

“Luis is part of the fabric of this place, both because of his personal and family narrative and his years of devoted, skillful, creative ministry,” said Bishop Diocesan John Harvey Taylor.

“Nothing happens around St. Paul’s Commons, from care of all our systems to attentiveness to our unhoused neighbors, in which Canon Garibay doesn’t play an integral role. And in just a few weeks, he and his team will once again be co-architects of diocesan convention.” 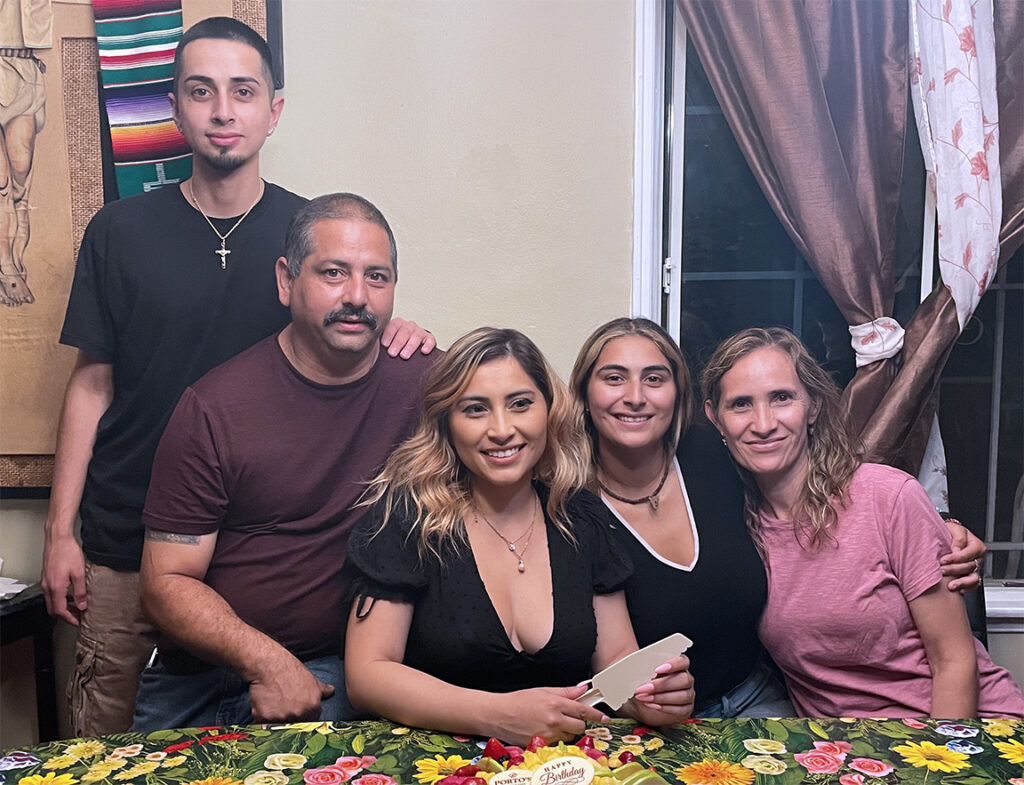 Garibay, who grew up across the 101 freeway near Los Angeles’s Echo Park neighborhood, is one of the diocese’s longest-serving staff members. “I was hired Sept. 15, 1994; it was a big year for me,” Garibay told Episcopal News. “I got married to Melania that year, and we had our son Luis, we call him Luigi.” Luigi, “who crawled and learned to walk in the hallways of Mary Magdalene and St. Paul’s Commons,” is 27, has a master’s degree in political science and “is on the hunt for a job now.”

A daughter, Wendy, 24, is a social worker. The Garibays’ youngest, Ashley, 21, is attending a nursing program at California Baptist University in Azusa. Melania Monje Garibay is an accountant in the diocese’s finance department.

Canon Clare Zabala Bangao, diocesan coordinator for mission congregations, calls Garibay “the go-to person” for pick-ups and deliveries of sacred items both needed and donated by congregations. Those items go into “the vault” and are catalogued, restored, and preserved for future use, she said.

This particular day Garibay’s quest is to recover a small altar that Samuel had placed in safekeeping and used for various services, according to Canon for Common Life Bob Williams, who has been a coworker of Garibay’s for 27 years. 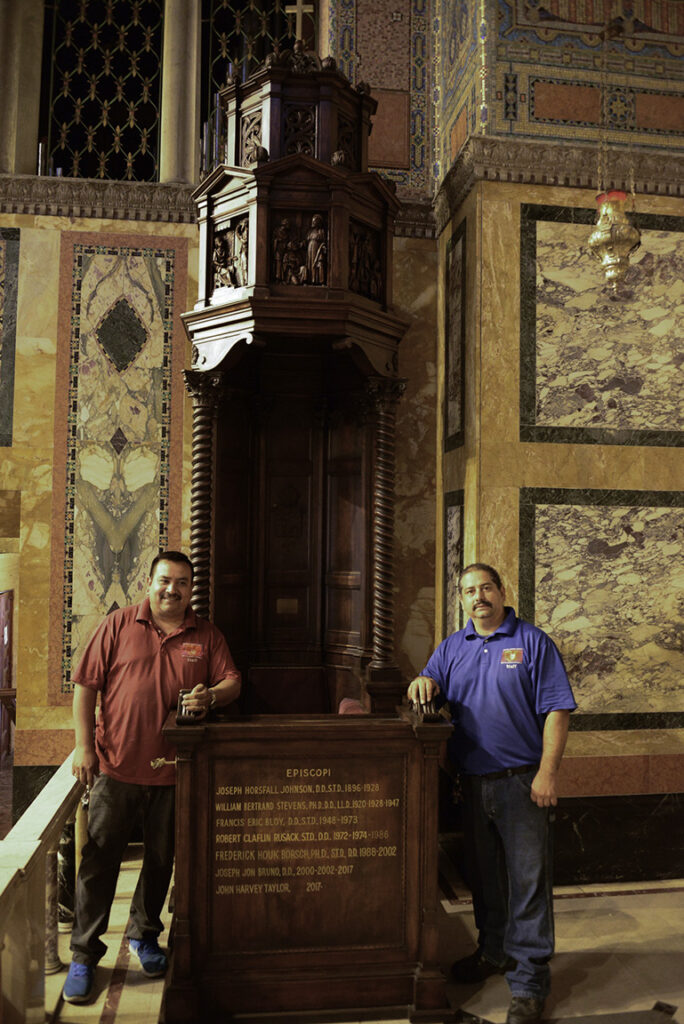 Luis Garibay, right, and St. Paul’s Commons staff custodian Bernardo Lopez pose with the diocese’s cathedra, or bishop’s chair, which was moved in 2019 to St. John’s Cathedral. Garibay oversaw the move of the treasured antique, which arrived in perfect condition at its new home. Photo: Chris Tumilty

“Among unique features of the buildings in Echo Park are the ways in which the original interior designers incorporated furnishings from the three previous St. Athanasius Church sites and two previous St. Paul’s Cathedral churches,” said Williams, who is also diocesan historiographer.

“Some furnishings were distributed around the diocese after Diocesan Convention determined that St. Paul’s Cathedral on Figueroa Street would be razed in 1980 due to earthquake damage.” Samuel’s survivors had offered to send the vintage table to Echo Park and Garibay and his team retrieved it.

“There are so many ways Luis is indispensable to the Altar Guild in preparing for convention,” says Marge Cooley, director of the diocesan Altar Guild. “I don’t know how we could manage without him, from bringing up the gondolas, to helping unearth all the liturgical “stuff” we need to transport, to shrink wrapping once everything is packed on, to making sure our stuff is in the appropriate room, and finally helping us to pack everything up and bringing it back to Echo Park to put away until the next year. 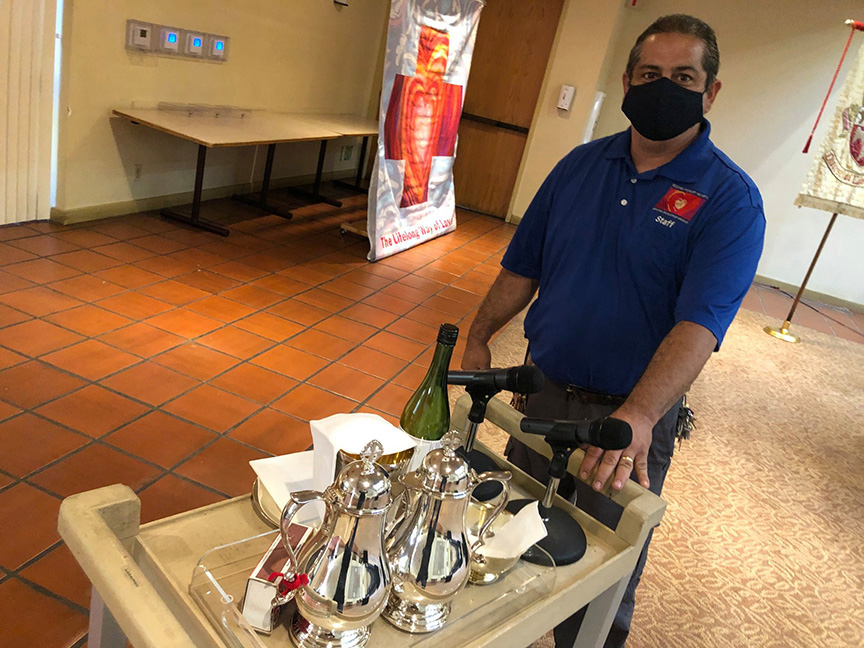 “And he makes it seem easy and not the hassle it can easily become. I can state on behalf of the entire diocesan Altar Guild, he is one our favorite people to work with.”

Preparation for convention begins a month in advance, Garibay said. “We have these three-tiered carts we call gondolas. One is for the altar guild, another is for the bishop’s office, and a third is for clergy spouses. As we put stuff together into the different carts, we bring it into the hall and shrink-wrap everything. And then we go down the list to make sure we don’t forget anything.”

Although there was the time “we accidentally forgot the bishop’s crozier and Melania had to go get it and bring it to diocesan convention.”

At Taylor’s first convention as bishop diocesan, “we forgot to bring the communion wine,” recalled Garibay laughingly. “Thank God for Canon Melissa’s former church, they have a vineyard and we found wine under their table in their booth. We grabbed it.” 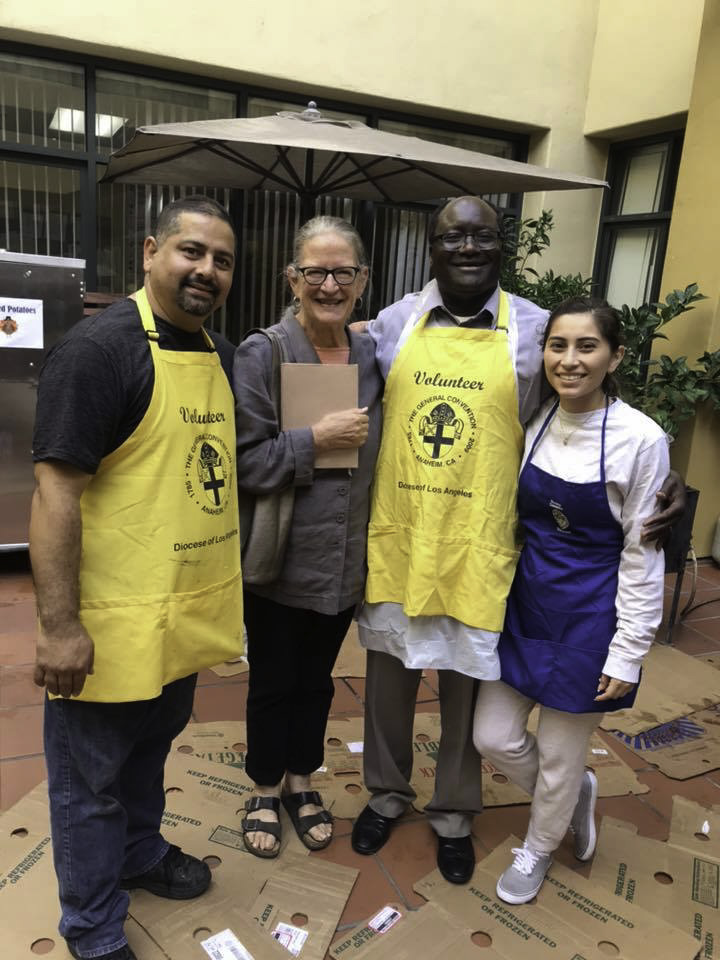 The Church of the Epiphany in Oak Park started the Red Door Vineyard to build community around a common project, according to Canon to the Ordinary Melissa McCarthy, former vicar. “It’s like a co-op; you purchase shares and then you get a share of whatever is produced, and the vineyard always tithed a certain amount of wine back to the church.

“Luis knew that they often come to convention and have been an exhibitor. He grabbed some wine from their booth – it was another way of them tithing back to the church, although they were a bit surprised but glad to help. Luis is super-fun that way.”

She added: “Luis is a delight to work with. He has a wonderful sense a humor with a ready laugh. His honesty and integrity make him easy to trust. He is always available to lend a hand, no matter how busy. He’s good at his job and he cares deeply about St. Paul’s Commons and the diocese. He has a ton of great stories and I rely on his experience so much in the work around the commons.

Although on call for most of convention, Garibay considers it “like a big quinceañera, (although) the church is a business too. People have to be appointed to diocesan functions, and they get a chance to show what they’re doing in their churches, what they’re working on and to remember the people who have come before us.”

“It’s been wonderful working with Luis since 1994, that is 27 years of ministry together providing hospitality at St. Paul’s Commons,” says Collado. “Luis is a people person. He loves the conversation and meeting people of various backgrounds and religious faiths. He engages in thoughtful, real, open and honest conversation. Everyone who encounters him feels very welcome, to a point that when they depart from their event at St. Paul’s Commons, Luis has made them feel it was their home for the weekend or for a day.” 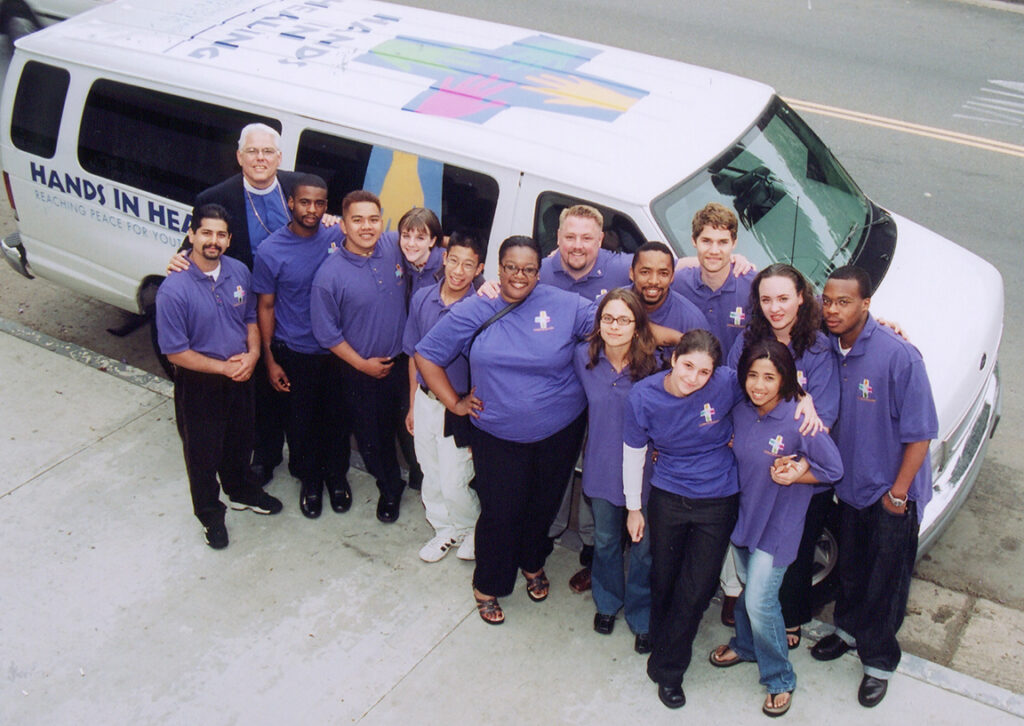 Luis Garibay, pictured at left, was one of the pilgrims on Bishop Jon Bruno’s 2002 Hands in Healing pilgrimage. Photo: Bob Williams

Canon Clare Bangao, diocesan coordinator for mission congregations, who shares an office with Garibay, said he, along with Lopez and Galvez, were the diocese’s essential workers, because they watched over the campus after the pandemic forced its closure.

“They came in every day while we were working from home, keeping the space ready for the time we would come back,” Bangao said. “Luis loves The Episcopal Church.”

Garibay’s ministry at the diocese began when he was only 16, when he met the late Bishop J. Jon Bruno, who at that time was rector of St. Athanasius’ Church. He credits Bruno with inspiring him to turn his life around from gang involvement. Later, he participated in Bruno’s signature 2002 Hands in Healing cross-country trip to promote nonviolence and community building.

“He has great faith; he loves the ministry he does,” Bangao said. “He inspires me because he’s very creative, he’s always looking for ways to make things work. And he always comes with a smile.” 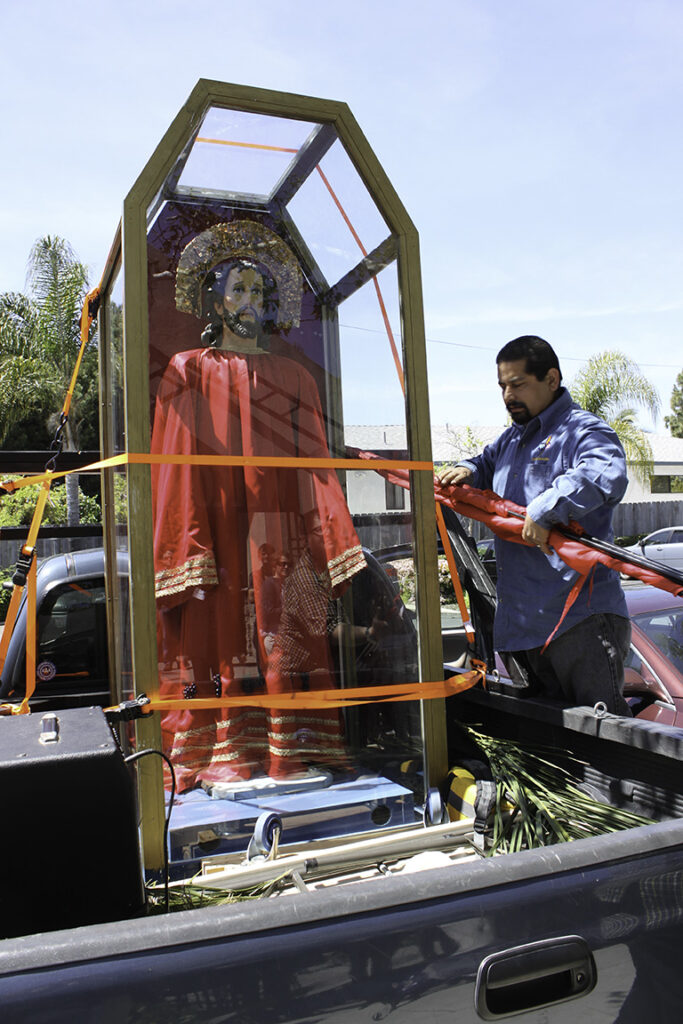 Garibay secures an El Salvador del Mundo figure in the back of his truck for its journey to San Diego for the first diocesan Via Crucis – Called to the Wall event in 2012. Photo: Janet Kawamoto

Bishop Suffragan Diane M. Jardine Bruce said she’s known Garibay since the days of the Hands in Healing pilgrimage. “My daughter Jardine was also a member of the Hands in Healing team. He has always been dedicated to his work at the diocese and to being of help outside his work in the diocese whenever he has been asked. He was a key figure in carting everything we needed down to the border for the Called to the Wall pilgrimages — especially when we were carrying El Salvador del Mundo in the back of his truck to the border. He is always right there to help in any way he can!”

Day-to-day, there are building repairs, restroom cleaning, trash hauling, “just making sure everything’s running, and anything else anyone throws at us,” Garibay said.

Now that the Commons has reopened, “I am so happy. It’s been very sad not to see people here, to see the building so lonely,” said Garibay, 46.

Williams said: “Luis makes everyone feel at home, extending pastoral care to those in need, including the unhoused who arrive in search of shelter. Luis knows every square inch of the buildings and their functionality, having been on site since construction began in 1992. He can repair almost anything and keeps an ever-watchful eye on the church’s historic and valuable artifacts.

“He works tirelessly in diocesan operations, including logistics for Convention and the upkeep of diocesan properties in addition to those at Echo Park, always with cheerfulness, wisdom, practicality, humor, and efficiency in all he does. Luis truly is one of the greatest assets the diocesan community has ever known, and I am privileged to count him, Melania and their family as cherished friends whom I greatly admire.” 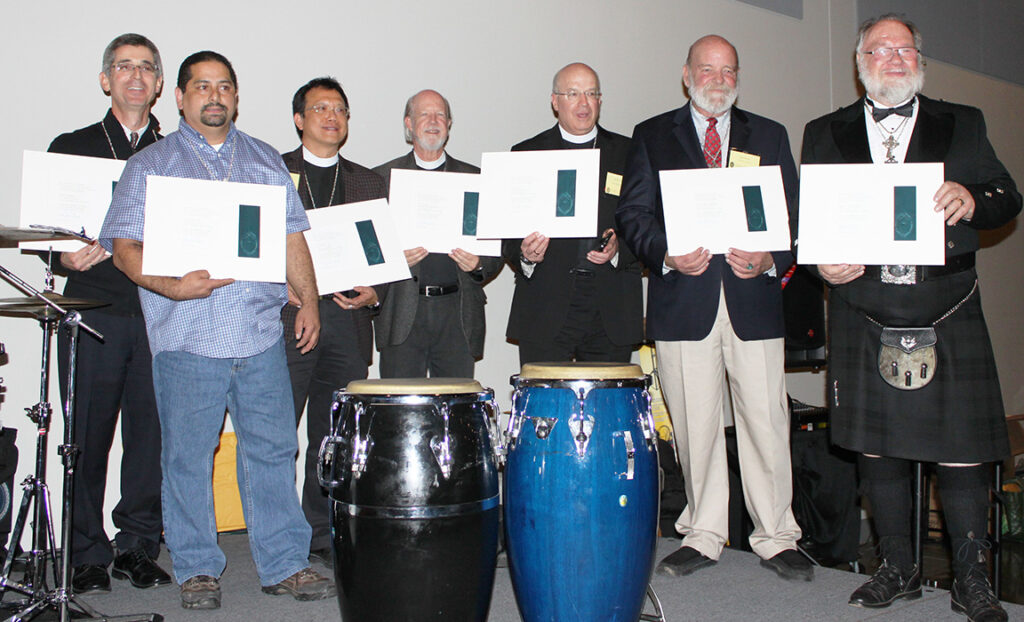 Garibay, second from left, was named an honorary canon of the diocese at Diocesan Convention 2014 by Bishop J. Jon Bruno. Photo: Alysha Kawamoto

Canon Serena Beeks agreed: “In every organization, there are people who are the glue that helps hold it all together. Luis Garibay is super-glue at St. Paul’s Commons and throughout the diocese.

“In addition to keeping everything running smoothly in a complicated building and leading a staff team that works beautifully together, he is the go-to guy for problem solving, from ‘How on earth will we move all of this to convention?’ to ‘Can anyone recommend a good floor refinisher?’ to ‘Why won’t my car start?’ to ‘What do ducks eat?’ And with all of that, he always finds time for a laugh or a song.”