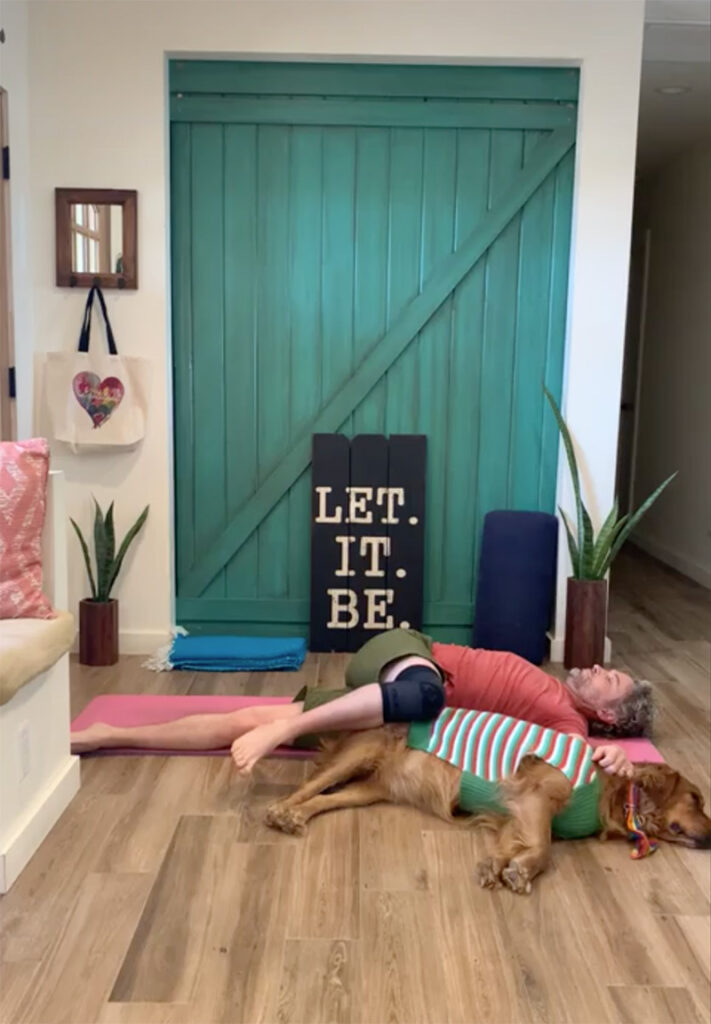 Now, as the pandemic stretches on, she wants to gift it to the entire diocesan community.

“There’s so much stress right now and a lot of us are in chronic fight or flight with this pandemic. Yoga is a wonderful tool to balance the sympathetic and parasympathetic nervous systems.”

“We’ve been getting people from all over,” Daisa told The Episcopal News recently. “One parishioner has family in Greece, and they’re watching.”

During a Dec. 8 class, she focuses on the lower back and knee areas, guiding the on-camera Rev. George Daisa, St. Patrick’s rector, to whom she is married, through a series of Hatha Yoga positions, designed to offer the twin benefits of flexibility and core muscle and back strengthening with deep, calming, cleansing breaths.

“He’s my student,” she said of George. “A lot of people are visual and so they need to see the pose before they do it, and it’s been great.”

Within an hour the Gentle Yoga class, she had already racked up 50 viewers. The numbers, at times, have quadrupled. “Generally, I get about 60 and 70 views. I’m not so much concerned with numbers as I am with reaching people,” she said.

She has been practicing yoga since attending graduate school at the American Conservatory Theatre for Acting, where it was part of the curriculum. “I remember thinking, this is ridiculous,” she said, “I would rather take another voice or Shakespeare or acting class. But, after my first yoga class, I walked out with the understanding that this was probably the most important class I would ever take. My shoulders were no longer in my ears and I felt about two inches taller. And so I’ve stuck with it ever since.”

She has been teaching yoga about 20 years, and “I really can’t imagine life without it.”

A fan favorite is Evy, the couple’s golden retriever, who on Dec. 8 was wearing a seasonal red, white and green sweater, prompting one participant, Doug, to exclaim in the chat: “I want a yoga sweater for Christmas!”

“She’s always on camera,” Daisa said, laughing. “Some days she’ll get on her back and do funny things; sometimes, she’s just the comic relief. Today, she just plopped down on the mat and George had to push her off. We’ve kept her as part of the yoga gig.”

The class is offered free to the entire diocesan community. To join, visit the church website or Facebook page.