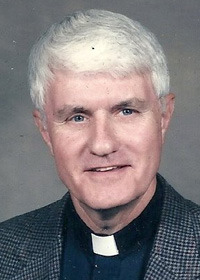 The Rev. Canon Alfred “Al” Smith, retired rector of St. Columba’s Church, Camarillo, died unexpectedly on Dec. 26. He was 82. He most recently was chaplain to retired clergy of the diocese of San Diego – a ministry he shared with his wife, Stephanie – and priest-in-residence at St. Bartholomew’s Church, Poway.

In addition to his wife, survivors include their two children, Deborah Wick (Robert) and Christopher Smith (Joan); a sister, five grandchildren, and several nieces, nephews and godchildren.

In 1999 Al and Stephanie Smith retired and went to live in Chipping Campden in the Cotwolds, England. Upon returning they moved to San Diego to be near their children and grandchildren. While in San Diego, Al served an interim ministry at St. Anne’s Church in Oceanside and partnered with an interim priest at St. Bartholomew’s, Poway. As a member of St. Bartholomew’s he assisted with services and pastoral work and volunteered at the parish’s thrift shop. He was a volunteer at KPBS Reading Service, where he read the Los Angeles Times to the blind. Al and Stephanie were members of the Scripps Mesa Garden Club, of which Al was at various times both president and vice president.

During his 1970 – 1999 tenure at St. Columba’s, Smith served on the board of Camarillo Hospice. At various times he was on the diocese’s Program Group on Mission and the Commission on Ministry, evangelism consultant for the diocese, and dean of the Santa Barbara Convocation (deanery). He was a first alternate deputy to the 1988 General Convention.

Before beginning his ministry at St. Columba’s, he was rector from 1964 to 1966 of St. Timothy’s Church, Apple Valley, where he also carried out ministry to pilots and their families at George Air Force Base during the Vietnam War.

Smith earned a doctor of divinity degree from Virginia Theological seminary in 1988. In 1991, he took a sabbatical, during which he traveled the west coast of the United States trying to determine what constituted excellent church communities. From that study he wrote a book titled Call to Excellence, Stories of Eight West Coast Churches. Bishop Frederick Borsch named him an honorary canon of the Cathedral Center in 1996.

Al Smith was born in San Rafael, California, on Jan. 6, 1934. He earned a bachelor’s degree in philosophy at the University of the South in 1956 and a master of divinity degree in 1959 from the Church Divinity School of the Pacific. Upon graduation from CDSP, he traveled to Alaska to be a missionary in Stephen’s Village. He was ordained to the diaconate July 30, 1959 and to the priesthood February 29, 1960 by Bishop William J. Gordon Jr. of the Diocese of Alaska. He continued his ministry in Stephen’s Village after moving to Beaver, Alaska, in 1959, traveling back and forth by airplane. In Beaver, he met Stephanie Harms, who was teaching vacation church school to local children. They were married in 1961. The couple was transferred to Tanacross, Alaska, but soon Smith accepted a call to be assistant at St. Francis’ Church, Palos Verdes Estates, in the Diocese of Los Angeles. After four years there he was called as rector of St. Timothy’s, and in 1970 became rector of St. Columba’s.