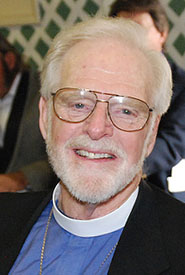 The Rev. Christopher Scott Rubel, priest of the Diocese of Los Angeles and psychologist, died March 7. He was 87.

Rubel served several congregations in the diocese, but was most closely associated with Grace Church, Glendora, where his father, the Rev. Henry Scott “Heinz” Rubel, once served as rector (1936 – 1946), and where Chris was an associate priest from 1979 to 2000. The chapel at Grace is named in honor of the Rubel family.

Survivors include his wife, Katherine Hauser Rubel, and their sons Scott and Clarke, and his sister, Dorchen Rubel Van Dyke. His parents and brother Michael – builder of the famous Rubel Castle in Glendora – predeceased him. Service arrangements will be delayed due to the COVID-19 shutdown.

Born in Long Island, New York on February 10, 1933, Rubel spent most of his life in the Glendora-Azusa area after his father was called as rector of Grace Church. Before being ordained, Chris’s father Heinz Rubel was a gag writer for radio comedians, and his mother Dorothy Rubel was a Greenwich Village Follies and Ziegfeld dancer. In a 2008 Internet post titled “An Inner Child and the Time Machine,” Chris Rubel reminisced about his childhood, recalling his parents’ elaborate parties attended by what he called “Hollywood extroverts.” The home was also known by Depression-era hobos and migrants, who often slept in the Rubels’ backyard and ate soup or stew that the family cooked in a large kettle over a fire pit.

Chris Rubel attended San Bernardino Valley College, then earned a bachelor’s degree at the University of Redlands and a doctorate at Claremont Theological Seminary. He was ordained to the diaconate in 1977 and to the priesthood in 1978 by Bishop Robert C. Rusack.

He was a chaplain at Citrus Valley Health Partners 2001-2005 while concurrently serving as an associate at Holy Trinity Church, Covina. He also was a counselor at Indian Hill Counseling Center in Claremont from 1972 to 2007 and a chaplain at Good Samaritan Hospital (1978 -1991).