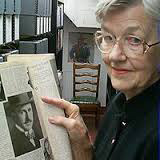 A memorial service for Constance McCormick Van Wyck, widow of the Rev. Canon William Van Wyck, will be held at 11:30 a.m. on Sunday, July 26 at St. George’s Episcopal Church in Laguna Hills where she had been a member for many years. She was 88.

Her husband died in 2005. She is survived by three sons, Charles, Miles and Craig McCormick, and by numerous grandchildren.

The daughter of silent film star Lucien Littlefield and celebrity journalist Constance Palmer Littlefield, she grew up in Hollywood and at an early age began clipping articles about celebrities, a hobby that grew into a passion and calling.

Her clippings, which spanned nearly 70 years, are now part of the special collections at the University of Southern California’s Doheny Memorial Library, known as the Constance McCormick collection. It includes files on more than one thousand screen personalities.

The collection offers film students and scholars a unique window into not just film but 20th century American pop culture as well. Van Wyck’s scrapbooks feature almost every article about individual actors and actresses from the 1930s to present time, according to Steven Hanson, cinematic television head librarian.

“We used her materials extensively for the Sinatra exhibit. I think she had about 14 books of clippings on Frank Sinatra,” he said.

Her father was a character actor and writer whose career began in 1913; he was known for known for Sons of the Desert (1933), The Little Foxes (1941) and Zorro’s Black Whip (1944). Her mother, Constance Palmer, a reporter for a Philadelphia newspaper, journeyed to Los Angeles while she was still in her early 20s to interview Rudolf Valentino, and met Littlefield on the set of The Sheik. They married soon after.