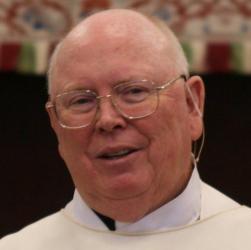 The Rev. Daniel Williamson, former vicar at St. John’s Church, La Verne, died of what was believed to be a heart attack on July 11, 2013. He was 69, and was serving as priest in charge of St. Luke’s Episcopal Church in Auburn, a parish in the Diocese of Northern California where he has ministered since 1994.

On his final day, Williamson left for a fly fishing trip on the Truckee River – something he had done many times before, as it was his favorite spot and a place of solace.

“That was a holy place, a place where he could be close to God and alone with his thoughts out in nature,” said Todd Warner, St. Luke’s senior warden. “Something that was a great comfort to us all … was the fact he was doing something that he loved when he died.”

That night, Williamson’s wife of 44 years, Diane, received word at their Roseville home that her husband’s body had been found in a field.

A person who saw him go down called 911, and police pronounced him dead on the scene, Warner said. It’s unclear whether Williamson had been traveling to or from his fishing spot, he said.

Known as “Father Dan” to his congregation, Williamson retired in 2008 after 14 years as rector of St. John’s Episcopal Church in Roseville. He was appointed part-time rector of the Auburn church on Orange Street in 2010 and was named priest in charge in 2012.

Williamson had a smile “so sweet you could tell it was coming directly from his heart,” Warner said.

“He delivered all of his sermons without notes, standing in the midst of the congregation, and he was a very educated and well-traveled man,” Warner said, “so he could speak about the Holy Land from personal experience.”

He shared his memories from visiting biblical places such as the Judean Wilderness, the Wailing Wall and Jerusalem, Warner said. A University of Alabama graduate and devout Crimson Tide football fan, he was known to adjourn service with a “Roll Tide.”

Williamson also served as the safety inspector for the Church Insurance Co., a branch of the Church Pension Group in the Episcopal Diocese of Northern California.

He had held that position since 2011, traveling to various churches to inspect their facilities and make recommendations to improve the safety of their congregation.

“He dropped everything and went to Diane Williamson’s side to comfort her,” Warner said of Beisner. “And he also was able to come and lead our worship services this last Sunday.”

A memorial service will be held for Williamson at 11 a.m. on Aug. 10 at St. John’s Episcopal Church in Roseville.

He is survived by his wife, Diane; daughter Barbara; sons Tim and John (a member of Grace Episcopal Church, Glendora); and three grandchildren.

Adapted from an obituary by Jon Schultz published in the Auburn Journal (Northern California) on July 18, 2013