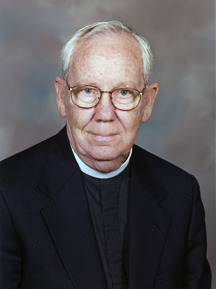 Donald Gaines served St. John’s as rector from 1966 to 1971, and again as assistant from 1985 to 1992. He had a special affinity for youth ministry and served the diocese for several years as youth advisor, supervising the program then known as EYC (Episcopal Young Churchmen). He was involved in many church and community programs for youth, including the Neighborhood Youth Association, and was a staff member and dean at Camp Stevens in the late 1950s.

In between his two stints at St. John’s, Gaines was priest-in-charge at St. Timothy’s Church, Compton (1975 to 1980), while working full time for United Way. He also worked for a time for the City of Long Beach’s Parks and Recreation department while serving at Galilee Navy Family Chapel (now closed). He had previously assisted at St. James’ by-the-Sea Church, La Jolla, which at that time (1960-1966) was part of the Diocese of Los Angeles. His first assignment was as vicar of St. John’s and the Holy Child Church in Wilmington (1953-1960).

Donald Gaines was born in Ganado, Texas, on September 7, 1924. He attended Sam Houston High School in Houston, Texas, before moving to Southern California, where he studied at John Muir College, Pasadena (now Pasadena Community College). He earned a bachelor’s degree in history at the University of Southern California in 1950, and a master of divinity degree in 1953 from Church Divinity School of the Pacific (CDSP). He also served for three years in the United States Navy, stationed on a carrier in the Pacific. In 1973 he earned a master’s degree in social work from the University of California at Los Angeles (UCLA).

He was ordained a deacon in 1953 and a priest in 1954 by Francis Eric Bloy, third Bishop of Los Angeles.

The Gaines family has requested that in lieu of flowers, memorial donations be made to Camp Stevens, designated for rebuilding of the Bishop’s Lodge (destroyed by fire in September 2007).