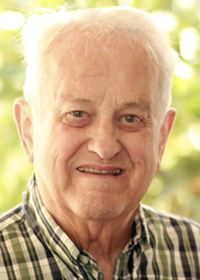 The Rev. Horace Douglas Judson, priest of the Diocese of Los Angeles and member of the family that owns one of the United States’ most renowned stained glass studios, died Feb. 22 of congestive heart failure. He was 85, and had been suffering the effects of Alzheimer’s for about three years.

Survivors include his wife, Kathern L. Macklin Judson; their three children, Earl of South Carolina, Joel (Midori) of Los Angeles, and Pamela (Jud) of Georgia; and eight grandchildren, ages 8 – 18. Joel Judson is about to be released from the hospital after a bout with COVID-19, and will be recovering at home.

Services will be held at a future time at St. Gregory’s Church, Long Beach, where the Judsons have been members in recent years. He will be interred in St. Gregory’s columbarium.

Douglas Judson was born in Glendale, Calif., on May 29, 1935, son of Horace Turpen Judson, a scion of the family that owns the Judson Studios, which created windows and other works of art for hundreds of churches and other sacred and secular buildings throughout the United States, including many in the Diocese of Los Angeles.

Doug Judson began working in the family business at the age of 11, doing cleaning and other chores and learning how to create stained glass. Upon graduation from high school in 1953 he enlisted in the U.S. Marine Corps and served in Korea for 14 months. In 1956, upon being discharged, he entered the University of California at Santa Barbara, where with financial assistance from the G.I Bill he earned a bachelor’s degree in history.

He returned to the Judson Studio, where he continued to work for several years. One of the projects of which he was particularly proud was the windows at St. Gregory’s Church; in their retirement years he and his wife returned to the church as parishioners. 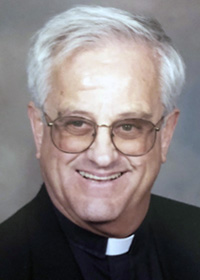 Doug Judson is pictured in 1999, early in his retirement.

After his marriage in 1966, Judson entered Bloy House, the Episcopal Theological School in Claremont, where he earned a theological degree. Bishop F. Eric Bloy ordained him to the diaconate in September 1970 and to the priesthood in March of the following year. Judson’s first church assignment was as assistant at Holy Trinity Church, Alhambra (1970 – 72). He continued to work part time at the Judson Studios after he and his wife Kathy returned from the Diocese of San Joaquin.

As a priest, Judson was known as a particularly pastoral and compassionate presence. Beginning in the late 1980s he worked with the L.A. Mission on Los Angeles’ Skid Row, visiting people living in hotels one or two days each week. “He was a people person,” his wife Kathy remembers. “He was concerned about everybody.” A devoted classical music fan, Judson also enjoyed stamp collecting. He was an associate member of the Order of the Holy Cross and took part in occasional retreats at their Mt. Calvary center in Santa Barbara.

Memorial gifts may be directed to the Los Angeles Mission or the Alzheimer’s Association.