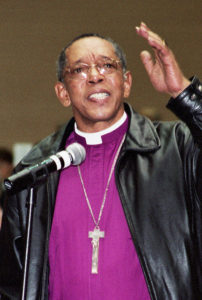 Bishop Edward Mackenzie is pictured at the annual convention of the Diocese of Los Angeles in 2005.

Edward was 85 years of age. The middle child between siblings Queenie and Philip, he was born to George and Mabel Mackenzie on January 8, 1935, in Graaff-Reinette, South Africa.

He attended the famous Krause Street Primary School in Vredendorp. After completing his senior certificate and later answered his call to the ordained ministry and enrolled at the Roman Scholastica and then St Peter’s Theological College, Rosettenville which was part of the Federal Seminary of Southern Africa (FEDSEM). His mentor at FEDSEM was the Rev. Aelred Stubbs, a monastic and anti-apartheid activist. FEDSEM was a gathering place for anti-apartheid activists including Steve Biko, Barney Pityana and Desmond Tutu.

Edward and his wife, Sylvia-Rose Pretorious, a former church organist at St Martha’s, were blessed with eight children, including two who became Episcopal/Anglican priests. Edward was ordained to the priesthood on September 19, 1965 at the Church of St Alban in Johannesburg and served as rector of the Parish of Westlea, which included St Gabriel’s, St. Philip’s, Christ the King, St. Margaret’s, and St. Luke’s.

He was called to the Diocese of Cape Town in 1974, where he served the Anglican churches of St. Mark the Evangelist, St. John the Evangelist and St. Andrew’s, Newlands.

He studied Ignatian Spirituality with the Jesuit order of Ignatious of Loyola in Boston, New York, Denver, Canada, and was most deeply touched by his 30-day intensive spiritual direction course at the Thomas Merton Institute in Kentucky.  Edward was elected and consecrated as bishop suffragan to now-Emeritus Bishop Desmond Tutu at the Cathedral of St. George in Cape Town, May 1988.  He served as suffragan and western regional bishop. The diocese stretched from Namibia to George. Some of his congregants were as far as 440 miles from Cape Town. Edward was one of the original signers of the famous “Kairos Document: A Challenge to the Church,” considered to be one of the most important theological declarations of its time.

He attended the Lambeth Conference in 1988 and after the meeting, he and Sylvia travelled to Australia, serving churches in Canberra, Wangaratta and Sydney.
After retirement they relocated to the Episcopal Diocese of Los Angeles, where he served as sometime bishop in residence, assisting congregations in Glendale, Laguna Beach and Los Angeles.

Edward is survived by his wife, Sylvia Rose, and his daughter, the Rev. Vanessa Mackenzie-Ayala (both in Los Angeles), and his children in Johannesburg: the Rev. Sharon Rousseau, Laura Mackenzie, Charmaine Mackenzie, Aelred Mackenzie and Leo Mackenzie. Bishop Edward’s twin sons, Graham and Gary Mackenzie, predeceased him in 2009 and 2012 respectively. He is also survived by 17 grandchildren, including the Rev. Lester Mackenzie of the Diocese of Los Angeles, Lynn Mackenzie, Esq, of Cape Town and Los Angeles; 23 great-grandchildren; and several nieces and nephews.

Edward was a friend and mentor to many priests and bishops of the Anglican Communion, and always reminded everyone he encountered about God’s unconditional love.

Obituary written by the Mackenzie family.