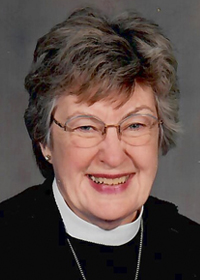 [The Episcopal News] The Rev. Faye Hogan, a longtime chaplain at an Oxnard medical center and assistant at several congregations in the northern area of the Diocese of Los Angeles, died June 5. She was 90.

Taylor wrote in a Facebook/blog post that Hogan was “beloved for her energy, wonderful sense of humor, devotion to justice, and keen, empathetic pastor’s ear.”

Her primary ministry was as a board-certified chaplain in the intensive care and critical care units at St. John’s Regional Medical Center, Oxnard (1993 – 2004). As part of that work she facilitated multidisciplinary care conferences at which physicians and patients’ family members worked to resolve end-of-life issues when patients were unable to express their wishes, or there were conflicting interpretations of previously stated instructions. Her experience and education made her a sought-after speaker, educator and writer on health issues.

During her ministry at St. Paul’s, Ventura, she started a pastoral care team ministry at Ventura County Medical Center, according to a 1997 article in The Episcopal News. She trained and directed a team of lay chaplains who served in the hospital’s pediatrics, orthopedics, telemetry, ICU and emergency departments. According to a hospital administrator, the patients tended to be poor; their physical and spiritual needs were acute.

“We do not come to preach or convert,” Hogan said, according to the article. “We teach by being a pastoral presence, a caring stranger, sharing a stranger’s burdens, just as Jesus did on the road to Emmaus.”

Before her ordination to the diaconate in 1996 and the priesthood in 1997 by Bishop Suffragan Chet Talton, Hogan had a varied career as a police officer in Tucson, Arizona; a teacher and administrator for 14 years in Los Angeles and Glendale schools; and a small-business owner.

Hogan was born in Baton Rouge, Louisiana, on January 15, 1932. She earned bachelor’s and master’s degrees from Texas Women’s University in 1953 and 1956, respectively; a doctorate in education at the University of Southern California in 1983; and a master of divinity through Bloy House (Episcopal Theological School at Claremont, now Los Angeles) in 1997. She was an Order of the Holy Cross associate and a member of the Association of Professional Chaplains.