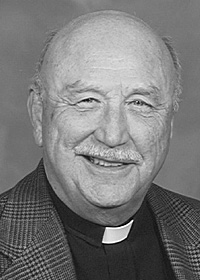 The Rev. Frederick Duncan Edghill, former rector of St. Stephen’s Church, Beaumont, died on April 25 after a long illness. He was 78, and had resided in recent years in Loma Linda, attending Trinity Church in Redlands.

A graveside service was held on May 1 at Mountain View Cemetery, and a service on May 23 at Trinity Episcopal Church, Redlands.

Fr. Edghill was most recently an assistant at Church of the Good Shepherd, Bonita, in the Diocese of San Diego after his retirement from St. Stephen’s in 2000. He previously served as interim rector of St. Peter’s Church in Rialto (1989), rector of St. Francis Church in Tampa, Florida (1971 – 1980), and vicar of the Church of St. Mary of the Snows in Eagle River, Wisconsin (1968 – 1970).

He was a sergeant in the San Bernardino County sheriff’s office prior to entering the ministry. After coming back to California in about 1980, he returned to the sheriff’s department as a deputy, serving until his retirement in 1992. He served as a supply or interim priest at several congregations in the inland Empire area.

Fred Edghill was born on October 5, 1930 in Brooklyn, New York, and reared in Southern California. He earned a bachelor’s degree in social science from the University of Southern Florida, and worked for Kaiser Steel for several years before joining the San Bernardino sheriff’s office. After graduation from Nashota House, he was ordained to the diaconate in March 1968 and to the priesthood in September of that year in the Diocese of Fond du Lac.